Goodmans is normally associated with audio. But a new capsule range of small, healthy eating appliances proves that it’s not limited to radios and sound bars. The Blend & Go is an affordable smoothie maker that aims to help you swap fizzy drinks for fruit shakes that you can take with you, thanks to a pair of flip-top sports bottles. In terms of bells and whistles, it’s pretty basic, but a compact base unit makes it an appealing proposition for those with smaller kitchens, while a bargain price point will do the same for smoothie newbies. 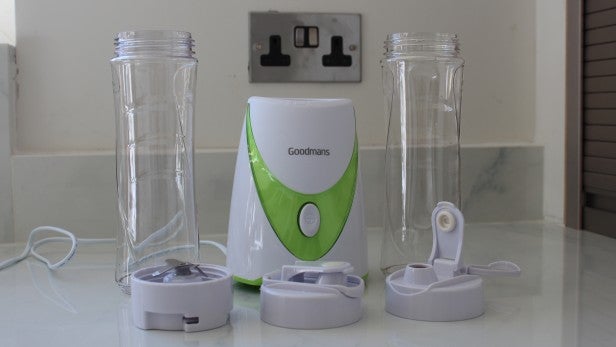 In terms of design, you’ll find a lot that’s familiar about the Blend & Go. It takes a format that resembles most other low-cost smoothie makers on the market – a lightweight compact base unit with a small but serviceable 250W motor, twist-in stainless steel cross blades with four angled knives and two 500ml bottles. The bottles are narrow, with a recommendation of firm fruit and vegetables to be cut into pieces no larger than 1.8cm, partially so they’re easier to blend but also so they’ll fit through the 6.5cm diameter opening. 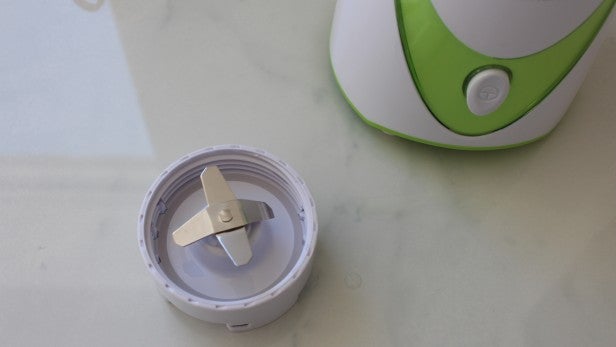 Once filled and topped with the blade unit, each inverted bottle can be twisted into the base unit to lock it in place. The Blend & Go doesn’t have any programmes – only a pulse button to operate it, which can either be used intermittently to blitz to the right consistency or held down for a continuous blending action. Sadly, there’s no option to push the button and walk away, so it requires constant attention. On the plus side, a 120cm power cable gives plenty of flexibility as to where it can be plugged in. Once blended, each bottle can be topped with a leak-proof lid with a wide drinking spout and carry loop.

Goodmans Blend & Go smoothie maker – What is it like to use?

Having relatively few bits of kit means getting started with the Blend & Go is fuss-free. There’s a couple of tips on how to layer different ingredients for the best results and a handful of recipes – two of which are cocktails and none containing vegetables or seeds, underlining that this is a machine that’s less for hardcore health fans and more for casual summertime drinks. 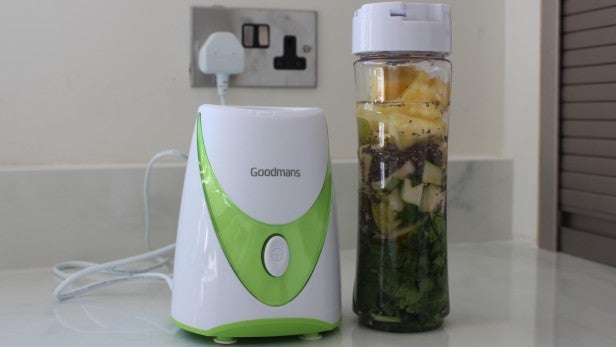 I started by adding water to a bottle before introducing spinach leaves. The leaves were especially hard to drop into the bottle because of the narrow opening and frequently stuck to the side. Once pushed in, I added fruit and seeds before attaching the blade unit. There was a useful arrow to help line up the blades with the base unit before I twisted it into place. I pushed the pulse button to start blending, which was a slow process. The blended mixture at the bottom of the bottle took around a minute to reach the spinach at the top, by which time I needed to stop as the instructions advised blending for no more than a minute at a time to allow the motor to cool down. 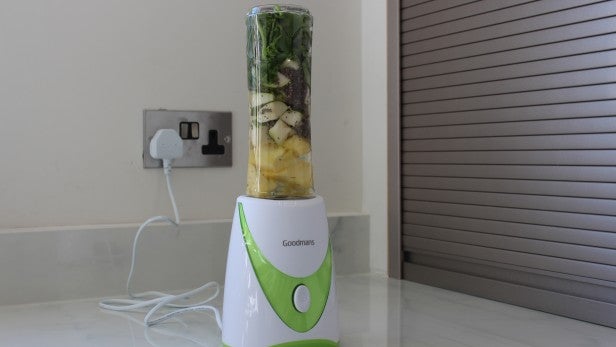 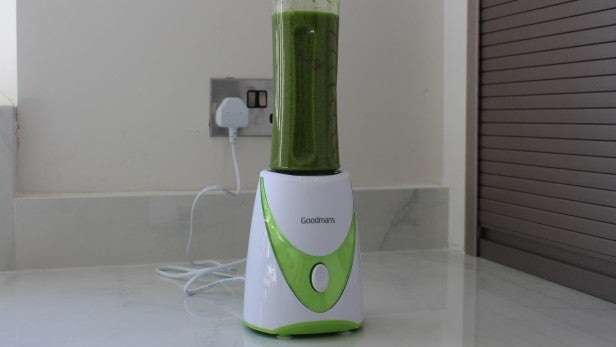 Once a few more minutes had elapsed, I tried blending again. It took around another minute for the mixture to reach a consistent texture and colour. The finished smoothie was mostly blended but there remained some traces of the seeds and a slight grittiness from a pear I had included. The bottle’s lid was easy to release and drink from and tipped upside down, didn’t leak.

Next, I tried a Sweet Berry Smoothie recipe from the instruction booklet and placed yogurt, milk, frozen berries and ice into a bottle. Again, it was tricky to add the berries into the narrow opening without spills. Once inverted on the base unit, the drink began to blend, first crushing the ice before starting to incorporate the fruit and milk. 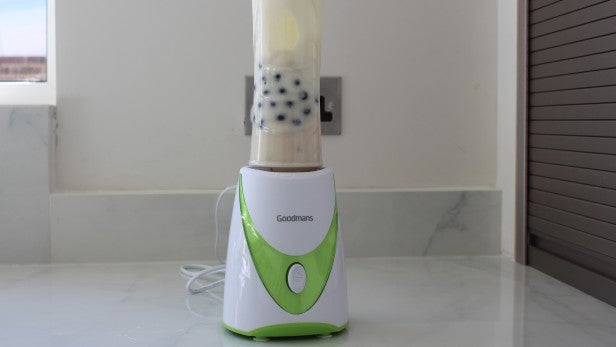 However, the vortex wasn’t strong enough to reach the top of the bottle, leaving much of the yogurt unblended. Once the colour had become consistent, in around a minute, it took a vigorous shake to mix the contents together. The drink, however, contained no traces of ice, and most of the berries were mixed in with a smooth consistency.

The bottles, lids and blades could all be popped in the dishwasher for easy cleaning but can also be washed by hand – however, a bottle brush would be required to clean inside thoroughly. 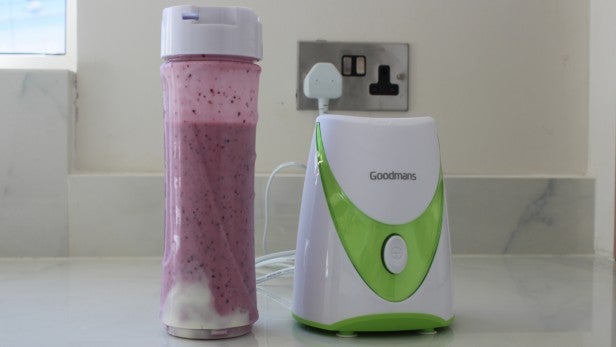 Should I buy the Goodmans Blend & Go smoothie maker?

As long as you’re not expecting bullet-like results, the Blend & Go is a reasonable bargain buy – good for weekend or occasional use for small households and space-poor kitchens. It’s understandably a bit more involved, from the time you’ll spend preparing fruit and vegetables as well as standing next to it with your finger on the power button, but the price is a big bonus. The compact motor has limited power, so it’s more suitable for drinks with a greater proportion of liquid to solid and fruit-based beverages.

More power would be a plus but the Blend & Go is appealing for buyers on a budget.