What is the Goodmans Aspect?

Goodmans, a name synonymous with great value, has hit upon a novel idea for its latest budget soundbar, the £100 Aspect. This ‘dual-format’ speaker can be positioned vertically or horizontally, giving you plenty of flexibility when placing it next to your TV. There’s no subwoofer to contend with either, making it the ideal sound system for those determined to avoid clutter.

The first thing that strikes us about the Aspect is how compact it is. At just 500mm wide – or high, depending on how you install it – it’ll take up very little space on your TV stand, and is unlikely to obstruct the set’s remote sensor either. Turn it vertically and you can put it alongside your TV if you prefer.

It’s also very attractive, wrapped in a dark grey cloth and capped by shiny silver panels at both ends. One of the panels sports a couple of hard buttons for power and source selection, plus touch-sensitive volume controls. There’s no display panel but the input button has a small light that glows different colours to denote the selected input. 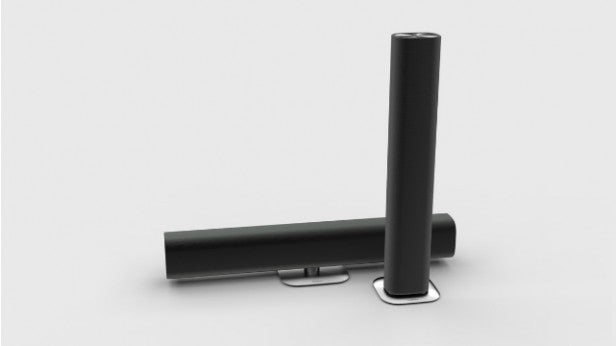 The ‘dual-format’ installation is made possible by a silver magnetic base. You can either snap it onto the bottom edge for horizontal mounting, or remove the silver panel at one end and slot it in for vertical mounting. It’s a simple but effective solution, although it’s not particularly secure when placed on the base horizontally – it wobbles slightly when you nudge it, and it’s quite easy to knock off.

For £100 build quality was never going to be the height of luxury but to Goodmans’ credit it’s much better than expected – the bar feels solid, while the silver panels and grey cloth are classy touches. 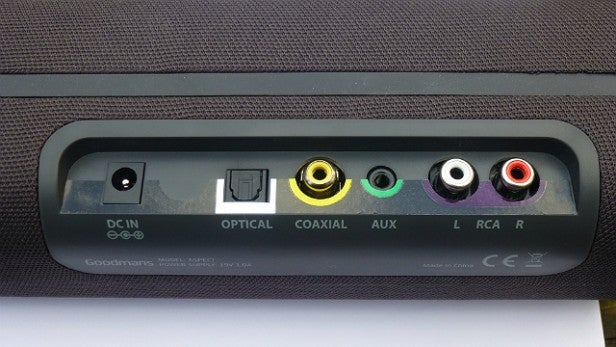 The sockets are found in a recess on the back. There are no HDMI inputs, but you do get a choice of optical and coaxial digital inputs, plus 3.5mm minijack and analogue stereo inputs. That’s more generous than some soundbars costing twice as much.

Unsurprisingly Aspect is light on features at this price, but it does boast built-in Bluetooth with NFC, which allows you to pair a compatible device by touching it on the bar.

The supplied remote is light and plasticky but at least it’s better than the dreadful blister button remotes that come with many budget soundbars. This one fits snugly in the hand and sports a thoughtful button layout. There’s a differently coloured button for each input and /- keys at the bottom for bass and treble adjustment.

However, with no front display panel it can feel like you’re flying blind. You have to set the volume, bass and treble levels by ear, which is no great hardship but we like a visual reference. The LED on the side panel flashes when you’re adjusting the volume or tone, and stops when you reach the maximum, but you can’t actually see it from the sofa.

There are two different sound settings for horizontal and vertical placement, which are selected by holding down the Aspect button on the remote. The side LED flashes red three times in horizontal mode and blue for vertical.

We dropped Aspect in at the deep end with Godzilla on Blu-ray, specifically the scene in which a tidal wave rips through Oahu and the MUTOs attack Honolulu Airport. Its clear and crisp sound brings pleasing energy to the action, but ultimately the soundbar’s poor bass output and general lack of volume left us feeling underwhelmed.

As the tidal wave powers through the streets there’s supposed to be a big, thunderous rumble but it’s just not there. You can sense a bit of bass depth trying to poke through but not enough to get your adrenal glands going, even with the bass level pushed up to maximum. 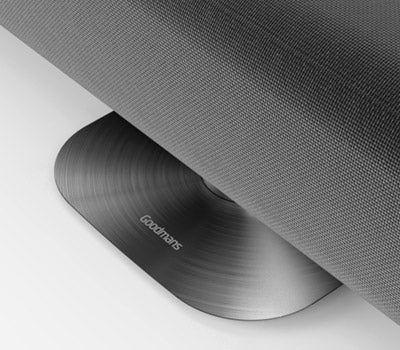 And when the MUTO destroys a domino chain of airplanes, the explosions sound thin and strained, which is also the case when Godzilla thumps his foot on the ground and lets out a bellowing roar. You don’t get the deep, chest thumping impact that you do from other soundbars, and the promise of room-filling sound is left unfulfilled.

The lack of volume is also a problem. We cranked it up to maximum and still didn’t seem particularly loud. We did an A/B comparison with our 55in Samsung TV and even this slim LED managed to muster a louder, bassier sound.

To be fair to Aspect, it’s not really designed to be paired with massive TVs in big rooms. It’s best suited to smaller TVs perhaps in the bedroom where the step-up in volume will be more noticeable. But as a main living room sound system it doesn’t really cut the mustard.

You might think that this level of performance is commensurate with the price, but a quick online search reveals that you can buy older but superior soundbars like Roth’s Sub Zero II, Pioneer’s SBX-N500 or Wharfedale’s Vista 100 for around the same price.

It’s slightly better with music but the lack of bass is still a problem, which means kick drums and basslines sit too low in the mix. Tunes sound thin, unbalanced and hard, particularly with piercing sax and trumpet solos. 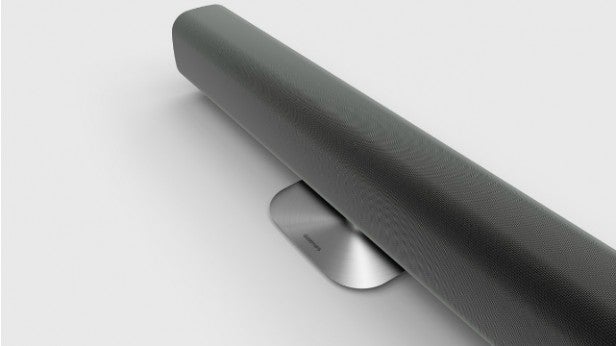 Should I buy the Goodmans Aspect?

We really wanted to like Aspect because it’s a lovely idea on paper. The choice of vertical and horizontal installation provides a level of versatility missing from most soundbars, while its compact, attractive design will look great in any living room. And at £100, it was looking like a bit of a bargain, too.

Sadly its underwhelming performance makes it a false economy. There’s a lack of bass and it doesn’t go loud enough to fill the room. In fact it was barely louder than our TV, which is the bare minimum for a soundbar. That said, if you’re using it upgrade the sound of a small bedroom TV you might be impressed.

Versatile installation, stylish design and a low price tag make Aspect a tempting proposition on paper, but lacklustre sound quality lets the side down.