GoGoRo really captured the world’s imagination when it unveiled its
electric scooter at the CES show in January this year. Here was an
electric vehicle that not only looked cool but never needed charging
either.

By using a swappable battery technology, users can
simply ride up to a GoGoRo power station and swap the bike’s two
batteries for fresh ones.

Based in Taiwan – a land of 24million
people and 18 million scooters – the company is shortly set to launch
its first trial run, installing 80 battery stations around the city and
building thousands of bikes.

So, while out at Computex, we headed over to the company’s
flagship store in central Taipei to find out whether the SmartScooter
is the future of two-wheeled transport, and perhaps more importantly
whether GoGoRo’s swappable battery tech is the future for all transport.

GoGoRo – it’s all about the batteries

Although the
SmartScooter itself is a key part of what will eventually be the GoGoRo
experience, the heart of the vision is the swappable battery technology
that will power them.

The idea is users will be able to ride up
to battery stations and simply swap their spent batteries for freshly
charged ones. Swapping batteries takes just six seconds, with the system
automatically sensing you’ve inserted the old batteries
into the charging station and popping out two fresh ones for you to use. 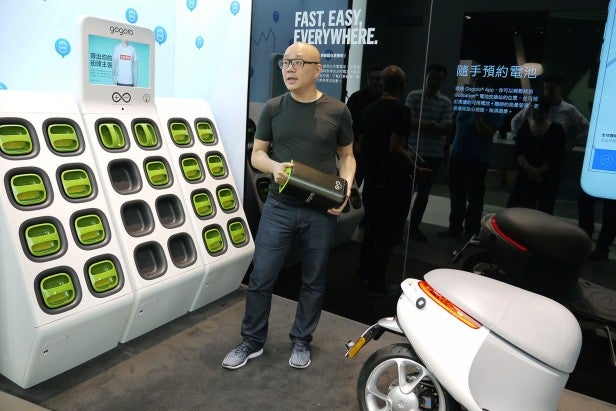 The 9kg, weatherproof batteries can be inserted in any
direction and there’s no latches to undo or bolts to remove. Just pull
them out and drop them in.

A pair of batteries will power the
scooter for between 30 and 60 miles, or what the company predicts will
be around 3 days of use for a typical user in its launch city of Taipei.

The is plan is that 80 charging stations will be installed around the city, with the idea being that every two blocks there will be a station.

The
whole system is linked into the smart systems in the scooter, with
information sent straight to your phone to let you know your range and
the nearest/best charging station to aim for. 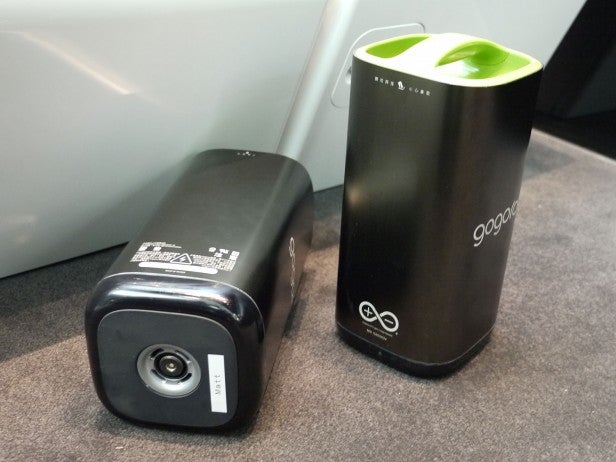 Each battery
takes several hours to charge, with the company being able to tailor the
charging speed according to user demand as well as the optimal time for
lowest electricity costs and lowest demand times for overall
electricity usage.

Indeed GoGoRo hinted at what might be next for the company by pointing out it would like to use its technology to help the overall distribution of power throughout the city, filling in gaps when there are outages and sucking up excess power when demand is low. It might need a few more than 80 stations before that’s a reality, though.

GoGoRo also aims to optimise the number of
batteries at each charging station to ensure those with low demand aren’t
left underutilised while busy stations are constantly left with
under-charged batteries.

Users will pay an as yet undisclosed
regular fee to use the service, on top of the purchase price of the
bike. However, crucially – and most controversially – there won’t be any option for
users charging either the scooter or the individual batteries
themselves, so if you’re caught short with no battery in the middle of
nowhere, there’s no way to get yourself back on the road. 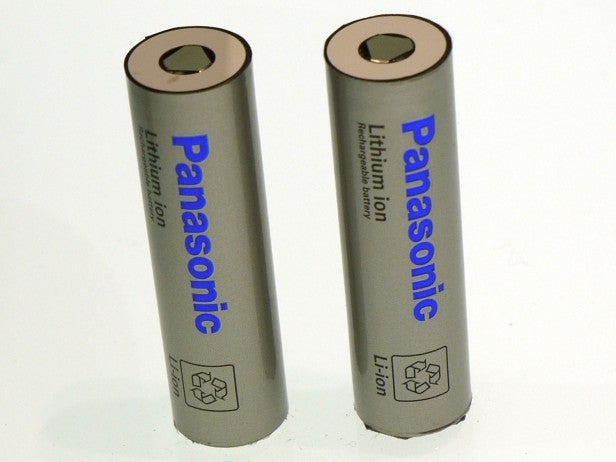 GoGoRo uses the same Panasonic cells as in Tesla vehicles

It’s
this combination of factors that very much marks the GoGoRo project out
as a unique service that sits somewhere between normal user-owned
electric vehicles and a public urban transportation system like the
Boris Bike or Taipai’s own ubike.

Still, in a world where there are 37
megacities of over 10 million people, there’s huge potential for solving
one of the world’s major transportation problems, even if the GoGoRo
system isn’t best suited for the open road.

GoGoRo’s
first battery-powered product, then, is the SmartScooter. About the
size of a conventional 50cc scooter, from initial impression it
may not obviously be battery-powered but there’s clearly a futuristic
vibe about it that instantly brings to mind many other electric and
hybrid vehicles.

The aluminium wheels and underbelly combined
with the sweeping lines of the light grey and white plastic body clearly
set it apart from your more typical scooter, and that’s before you’ve
even seen the fancy electronic dash and snazzy starter system. 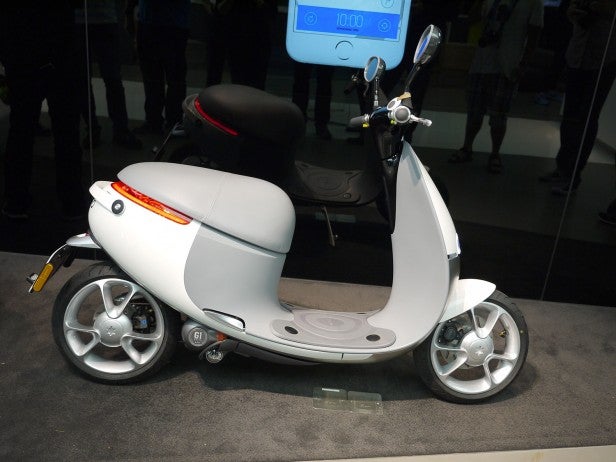 Activated
by a Bluetooth keyfob that you can clip to the wing mirror, the bike
springs into life with a nightrider flash of its rear tail light, and
chirps your chosen tune at you while the dash will illuminate in your favourite colour – all selected via the app on your phone.

The dash is one large, bright LCD, with huge displays for the battery level
indicators and your speed, plus a host of other useful information is
dotted around. It’s a far cry from the basic mechanical dials of most scooters. 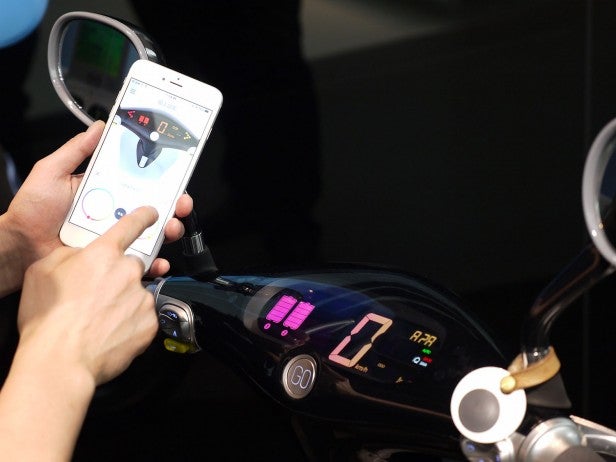 There are clear marks of quality elsewhere too.
The headlights are the same Philips lamps as on the Porsche GT3, while under
the swappable front panel care has been taken to ensure that all the key fuses are
situated under one neat panel alongside the bike’s auxiliary batteries.

Take the seat off and the quality stamped-aluminium chassis is
revealed along with the compact, water-cooled drive unit. Tucked inside the wheels there are also disc brakes for a further premium touch that benefits
weight and stopping performance.

Indeed GoGoRo makes strong
claims for the bikes performance, pointing out that the use of an
electric motor means it’s packed with torque, making it quick off the
line. It’ll also go up to 95km/h or 60mph. 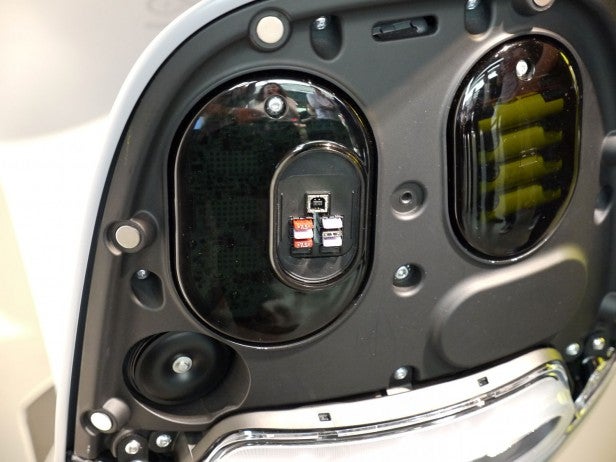 Sadly we weren’t
given the opportunity to ride the bike – not least because this writer
has never ridden a motorbike/scooter before – but were given a
demonstration of it in action, and it certainly looked nippy and agile.
The addition of a reverse gear is also a significant boon.

Stopping
power also impressed, though the propensity for it to skid suggests
either a little fine tuning of the break/tyre balance is required or ABS
should be fitted.

Sitting atop the bike, it felt a little small
for this writer’s six foot two inch frame, and the seat is a little
rounded and forward sloping making it feel a little less secure than
more traditional flat-seated scooters. 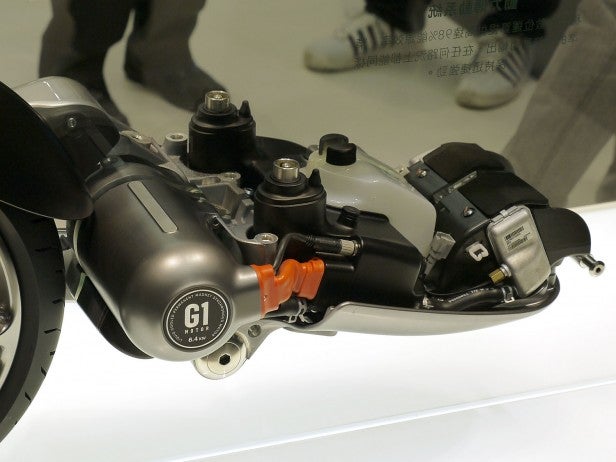 Still, the SmartScooter certainly feels largely suited to its task,
particularly in the sense that, like Tesla, GoGoRo knows its early
customers will be wealthier and will want the feel of a premium product.
Although pricing is yet to be announced, we suspect widespread adoption
of the GoGoRo system will almost certainly require a cheaper option.

The
GoGoRo SmartScooter looks well set to make a big splash in those cities
where scooter use is already massive. Its combination of being a
convenient electric option that’s also high-performance and has a
premium feel will instantly appeal to the more affluent
scooter users of today’s megacities.

Whether the system will be
truly scalable so that it’s affordable for the majority of scooter users
is hard to say. Moreover we still wonder just how well suited a
swappable-battery system will be for different vehicle types, as compared to the more universal
approach of Tesla, where vehicles simply charge up wherever they can.

All that said, GoGoRo is doing a lot right and it’s great to see another company really pushing the possibilities for electric vehicles, whether for the open road or the inner city.