God of War tells a wonderful tale through a beautiful spectrum speckled with more than a few drops of the blood of your enemies. It’s a shame, then, that boss fights have fallen by the wayside at every level to become terribly monotonous – but if that’s the cost of what Santa Monica has built, it’s certainly a price worth paying.

It takes a brave developer to entirely change the formula of a long-running, highly successful series. “If it ain’t broke, don’t fix it” rings true for many franchises. To change the fundamentals of a series risks upsetting a fanbase that may have been around for, at times, decades. For Sony Santa Monica to change the very fabric of God of War is a phenomenal gamble – but one that, for the most part, pays off.

God of War is superb, offering a stunningly detailed and lush world built with a level of detail that makes it wondrous to explore. It also has room to breath, allowing Kratos and Atreus’ roller-coaster relationship to build into something that can almost rival The Last of Us’ Ellie and Joel. While a lot has changed for God of War, it still holds one of the most satisfying and entertaining combat systems in gaming.

Many give Kratos a rough ride, discarding him as a one-dimensional angry meathead, but this does him a monumental disservice. Kratos is one of the greatest characters in video games, and this story adds so much more depth to an already excellent persona.

Kratos is a man conflicted. Having fled Sparta among all the death and destruction caused by his hands but not his heart, Kratos seeks a quieter life. The story begins at the funeral of Kratos’ wife, and we follow him and his son, Atreus, as they seek to lay her ashes at the largest peak in all the realms.

Sony Santa Monica does an astounding job of portraying Kratos’ inner conflict, despite him saying very little. While Atreus may do most of the talking (and often, complaining), it’s Kratos’ restraint that speaks volumes. 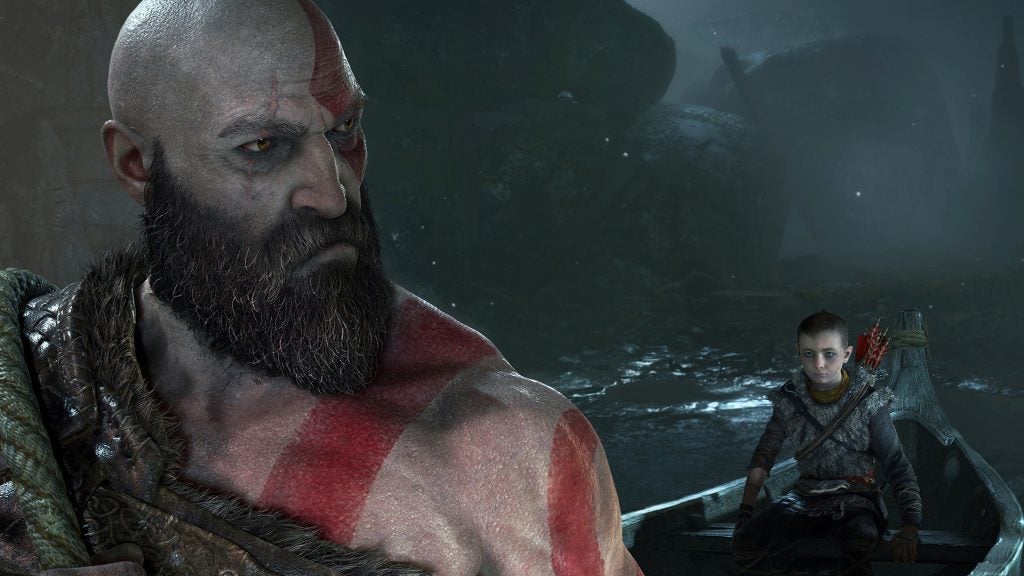 Choosing to hide his past from everyone, including Atreus, results in his son feeling unwanted, unloved and unworthy. The cinematography displays Kratos’ internal struggle through his facial detail; he’s stern, downright harsh in fact, to Atreus as the boy comes up against the truth, giving the story much weight. At times I found myself leaning towards the screen, begging Kratos to tell Atreus the truth, only for silence to befall the scene. It’s heartbreakingly brilliant.

The story certainly takes its time to unfold. God of War is far slower paced than its predecessors, which may not sit well with some fans. Give it the time it demands, however, and the payoff is definitely worth it.

None of this storytelling would be half as impactful if it wasn’t for the simply astonishing visuals. The level of detail across the board is jaw-dropping. In particular, the facial detail in cut-scenes is amazing, but the difference in visuals between cutscene and gameplay is negligible. There were times when the game stood still, as I hadn’t realised that control had returned to me. It’s absolutely stunning.

Moving from Greek to Norse mythology, God of War makes superb use of the source material, bringing in some wonderful characters and creatures that are as entertaining as they are beautiful to look at.

With the story taking Kratos and Atreus into different realms, each one takes on its own distinctive character and identity thanks to a beautiful use of vibrant colour schemes. Without spoiling where you go or what you’ll see, just know you’ll be capturing plenty of shots along the way; so many frames appear painted, particularly on PS4 Pro. 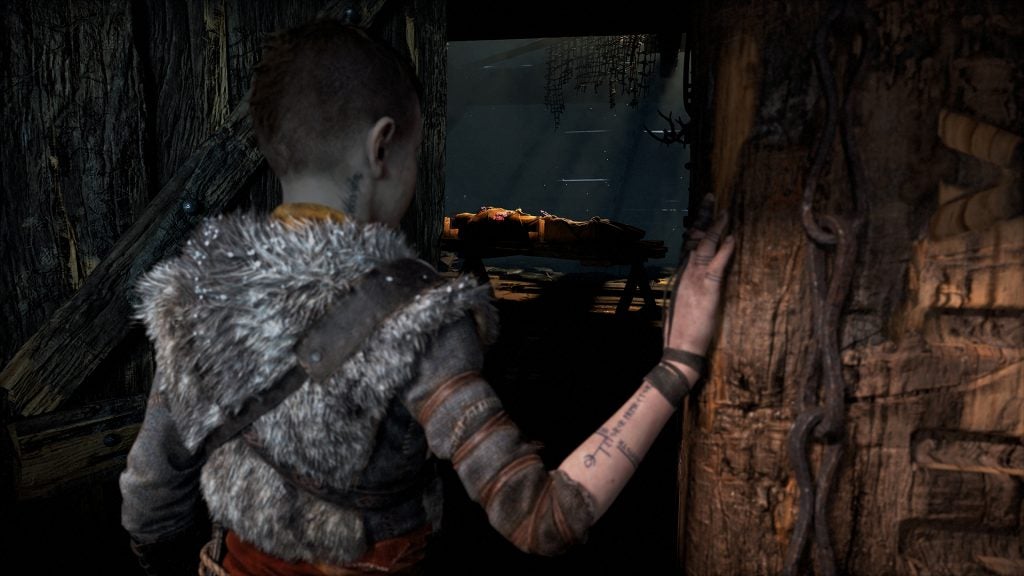 One thing to mention for Pro players is that God of War comes with two graphics modes: Performance and Resolution. The former will render the game at 1080p with an almost rock-solid 60fps, while the latter delivers 4K via 2160p checkerboard and a variable frame rate targeting 30fps (although it rarely maintains it).

The difference between the two is stark. I spent most of my time appreciating the beautiful visuals in 4K, switching to Performance mode only for the trickier combat encounters. There’s certainly compromise in both, but the game does a good job of allowing you to easily switch between the two should you want to.

In terms of performance, particular praise should be shone on God of War’s complete lack of loading screens. Part clever illusion, part absolute wizardry, the team has done an amazing job of maintaining the game’s flow throughout its entirety. If you choose to play for long sittings, you won’t be stuck staring at a scrolling wheel or waiting in a lift, even after dying in combat.

On the combat front, God of War has one of the best in the business. It’s certainly complex, and asks an awful lot of the player in terms of the amount of buttons you have to push, things you have to consider at any one time and level of challenge from the enemy, but it’s incredibly rewarding once you get to grips with it.

The new over-the-shoulder perspective means that everything becomes more visceral; we’re now much closer to the action than we’ve ever been before. But the consequence is that we see much less of the arena, so now Kratos has a ‘threat meter’ around him, warning of any impending strikes the player can’t see. It works really well, except when the camera gets a little too close and makes it almost impossible to see all the threats at once, particularly those directly behind you.

You then also have light and heavy attacks, as well as a shield. Timing blocks give you the opportunity to counter, but absorbing too many blows on the shield leaves you wide open to a follow-up attack. Atreus is also on the battlefield, assisting you with arrow strikes at the push of a button, delaying an enemy’s killing blow to save your skin, or simply creating cool combos to finish off the crowd. 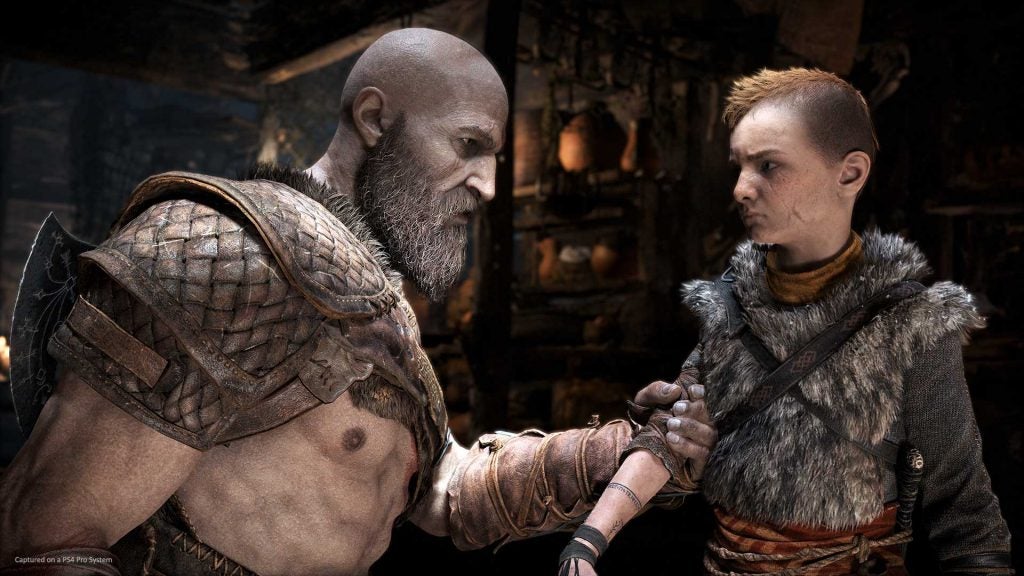 When fights flow, they’re a thing of beauty. Even in challenging encounters, I never felt undone by something beyond my control. On occasion, my weaponry and armour simply weren’t strong enough; in others I was outdone by the better opponent. The level of strategy in play is superb.

There’s now much more depth to the game, too, thanks to the upgrade tree and ability to unlock new armour. This isn’t a simple case of ‘new equipment = better’, either; you have to study what each new piece of kit brings to the table and assess if it benefits how you play.

There are numerous stats to consider: defence, strength, runic, vitality, cooldown and luck. Your three pieces of armour (chest, bracers and waist) will only improve two or three, so choosing the right one is important. It’s a neat touch, and again adds a layer to the series that didn’t exist before.

As superb as the combat is, sadly, there’s one area that’s unbelievably poor – especially for a God of War game. Boss fights simply don’t have the frequency nor impact that the series is known for. In addition, the main boss encounters are too short-lived to be memorable, while the ‘B-tier’ big boys are so repetitive they become somewhat monotonous.

There are two or three types of B-tier boss fights, all involving the same form of enemy, all requiring the same strategy to beat – and it’s so disappointing. God of War has always been known for its larger-than-life bosses, but here they’re simply a sideshow.

Another sour note is that, since this is the start of a new trilogy, the conclusion doesn’t quite have the bombastic climax towards which it is building. It’s all a bit serene, which is a shame, but there are plenty of nods to a sequel – more than enough to keep me invested. 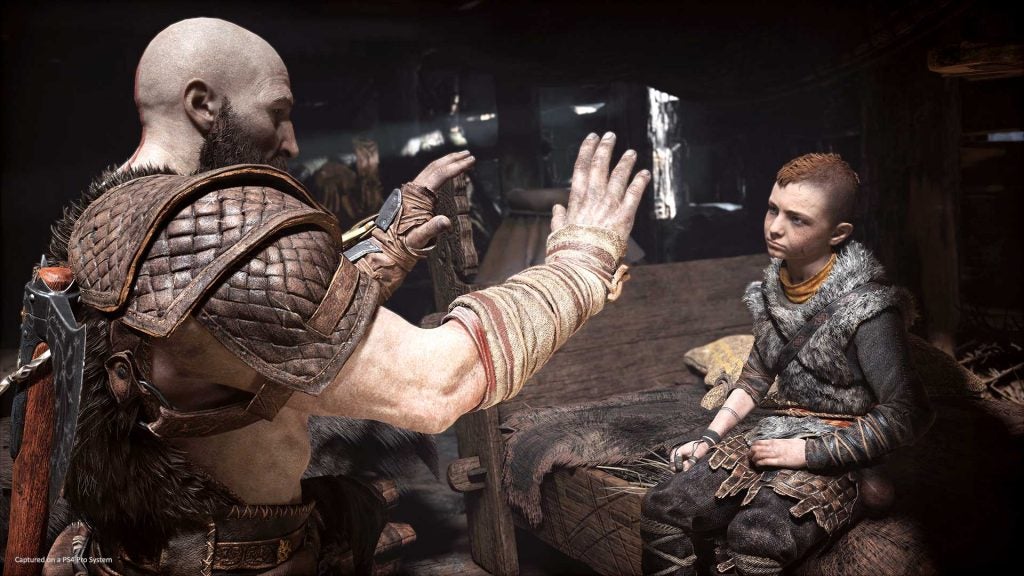 In terms of investment, it’s also worth noting that God of War is huge. I spent at least 40 hours with the game and managed only a handful of side missions. This is an incredibly meaty game. After completing the campaign – itself comfortably 30 hours long – you can return to all those incomplete sidequests, favours and hunt collectibles you missed along the way.

The side missions I took part in also felt worthwhile, unlocking runes that can improve armour, a useful special attack for the Leviathan Axe, or even just a healthy amount of XP and currency. The missions themselves were varied and enjoyable. Plus, simply exploring the Lake of Nine – the main hub area of the game – was greatly rewarding.

God of War tells a wonderful tale through a beautiful spectrum speckled with more than a few drops of the blood of your enemies. It’s a shame, then, that boss fights have fallen by the wayside at every level to become terribly monotonous – but if that’s the cost of what Santa Monica has built, it’s certainly a price worth paying.

The ending isn’t as grand I’d hoped for, but the setting up of a sequel makes up for this – and there’s still plenty left to do in the Lake of Nine. God of War is the best in the series.