Apologies to you, PSP developers of the world, but let’s face facts: Ready at Dawn is making you look like a bunch of sissies. While the rest of you are struggling to bring your ropey ports of PS2 and PS3 games to Sony’s handheld, the team behind last year’s Daxter seem to have no problems bringing epic entertainment to the smaller screen. God of War: Chains of Olympus isn’t just a tour-de-force of technical know-how; it’s also an object lesson in how to take even the most ambitious of console games and make it work on a mobile machine. This isn’t God of War lite or a decent God of War spoilt by minor visual or gameplay issues – it’s just God of War, with all the scale, beauty, blood, guts, bombast and (ahem) boobs that this entails. 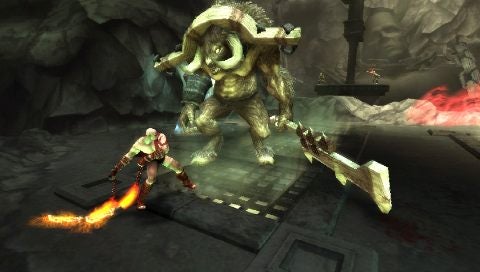 Of course, it’s the astonishing visuals that steal the show. Lord knows how they’ve done it, but Ready at Dawn has managed to produce a God of War on PSP that doesn’t look a million miles different to the existing two games on the PS2. Sure, there’s a little less detail on the characters and scenery. Yes, some of the effects are a little toned down. That doesn’t change the fact that our anti-hero, Kratos, the monster design, the animation, the architecture and the various combo and magic weapon attacks still look utterly spectacular. From the besieged city at the beginning to the grand temple that makes up the mid-section to the underworld areas at the end, you’re consistently impressed with the coherent and beautiful production design, and the gruesome inhabitants that populate the game. 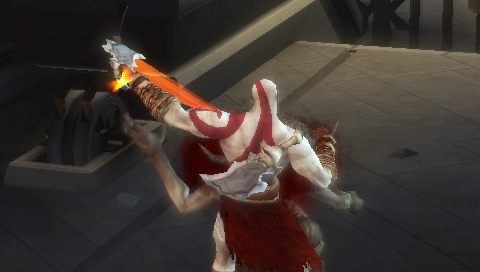 Nor has Ready at Dawn been tempted to reduce the series’ awesome sense of scale. Where other developers, worried about the smaller screen and the limited 3D horsepower of the PSP, might have been tempted to zoom in on Kratos and reduce the numbers of enemies or the complexity of the environments, Ready at Dawn has copied the zooming, swooping camera of the PS2 originals and hasn’t been afraid to pull the camera back out to show a minute Kratos looking almost puny in a world built on literally Olympian proportions. It’s not often that I’m gobsmacked by a PSP game, but Chains of Olympus has had my jaw on the floor more than once. Put on some headphones and throw in that signature, brass-heavy Holst-alike score, and it’s a surprisingly powerful experience.

But the game’s technical achievements are only a part of the picture. What Ready at Dawn has clearly done (with a little help from Sony’s San Diego studios) is analyse what makes God of War work and then find ways of making that fit on the PSP. The fact that the camera has always been CPU-controlled probably helps, but somehow Chains of Olympus maps all the complex, combo-based combat mechanics, the use of magical attacks and the dodging, jumping and climbing manoeuvres of the PS2 games onto the four face buttons and two shoulder buttons of the PSP. The amazing thing is how quickly you make the adjustment, learning that different combinations of the shoulder and face buttons will pull off particular attacks, the rapidly clicking both shoulder buttons and pushing the analogue nub to initiate a dodge. It feels natural – and this proves crucial to making the game a joy to play. 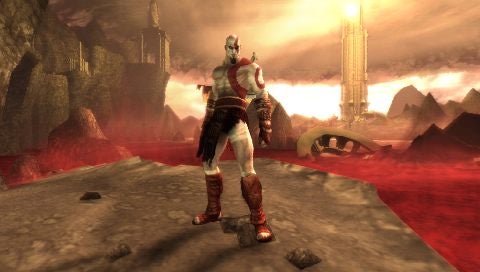 All the elements of the superb God of War gameplay are there as well. Brutal brawls featuring multiple weaker enemies? Entertaining block and switch puzzles? Tricky fights with one or more giant-sized foes? Medusae? Climbing sections? Columns to be knocked over and huge siege-engines to be fired? All present and very much correct. Admittedly the game is a little light on weapons, but Kratos’ legendary chained Blades of Chaos are still as flexible and powerful as ever, while the new addition – a gauntlet that packs a god-like punch – is just brilliant. You can almost feel the crunch of shattered zombie skull. The gory finishing moves are back, and once again show how – used the right way – those normally irritating quicktime event sequences can actually add something to a game. The latest magical attack, a pounding from a fiery Efreet, is another one to treasure. In fact, the game even manages to throw in a little off-screen slap and tickle – where does lusty Kratos find the energy? 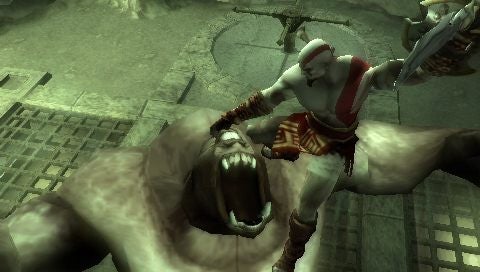 Best of all, Chains of Olympus captures the relentless pace and interesting narrative hooks the series has become famous for. A prequel, the game takes place in the days before the first God of War, with Kratos up against mysterious forces from the underworld when the Sun god is put out of action. All the same, Chains feels like more than just a side-story. Once again, it delves back into the haunted Kratos’ blood-drenched life and fills out a little more of his character, reminding you why of all the myriad hard man game characters introduced in recent years, this one stands out as something special. Meanwhile, the pace is nigh on perfect, spacing high-octane sections of combat with more tranquil sections of puzzle-solving, and ensuring that each chapter builds towards a suitably gigantic climax. And while I suspect Chains of Olympus is too intense a game for the daily commute, kudos to Ready at Dawn for placing checkpoints and save points just about regularly enough to make it possible to play the game in relatively bite sized chunks. That’s ‘possible’, but not ‘probable’, because once you get started it’s nearly impossible to put the thing down. 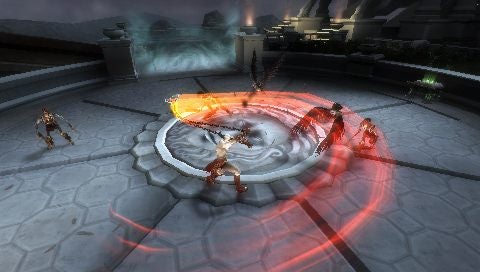 Which brings us to the game’s major flaw. I love Chains of Olympus, but there’s no getting around the fact that it’s short. On normal or easy difficulty levels, you’ll happily crack it in five or six hours on your first play through. The existence of a video clip on ‘the lost levels’ as an unlockable bonus suggests that there was originally more planned for the game, and whether the additional content didn’t fit the story or just didn’t fit the schedule, you can’t help wishing that the game kept going that bit longer. On the plus side, it is a game you’ll be happy to fight through more than once, and you do get a number of unlockable bonus challenges to put Kratos’ combat skills to the rest. 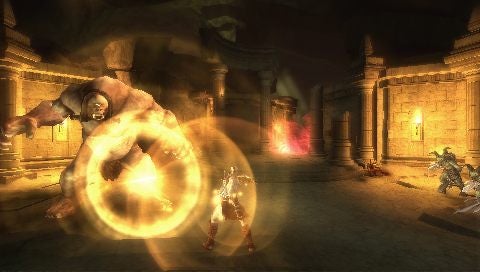 The value for money angle is all that stops Chains of Olympus being our highest-rated PSP game ever. All the same, it’s one that every PSP owner ought to have in their collection, partly to see what Sony’s handheld can do when pushed to its limits, and partly because it’s such a blockbuster experience while it lasts. Fans of the series may carp a little about the limited weapon selection, the shortness of the game or the odd missing move, but weigh these things against the fact that this is easily the best attempt I’ve ever seen at bringing a full-scale console experience to a handheld, and they barely register on the scales. I hope it’s a title that will inspire other PSP developers to raise their game – it’s certainly one to make us raise our expectations.


These chains are a little short for comfort, but otherwise this is the single best game on the PSP and one of the finest experiences on any handheld. Magnificent.