The most welcome change to gameplay is that the quick-time-event sequences used to dispatch minor monsters are out, though you’ll still find some in the boss battles. Still, even here these are mitigated by some new sequences where you get to stab whichever fiend you’re up against repeatedly while dodging incoming attacks via twitches of the left analogue stick.

The cumulative effect is to make Ascension perhaps more skilful than previous God of War games, though oddly less satisfying. When you take on the role of Kratos, you want to feel like Greek mythology’s biggest badass. In Asencion that’s not always the case, though to be fair the badass quotient climbs significantly as the game goes on. 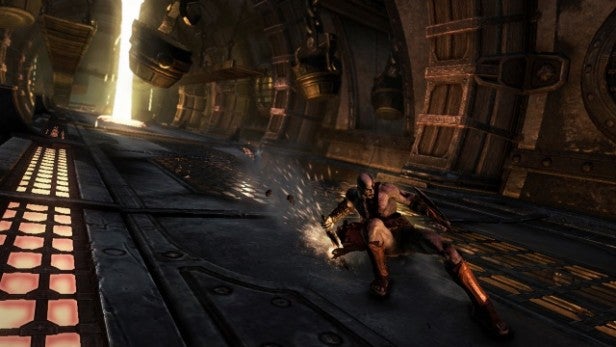 Beyond the combat there’s still a mix of puzzle-solving and light platforming. The early stages are fairly light on puzzles, but more arrive in later stages. The platforming, however, is a little weaker than in earlier God of War games. It’s still spectacular, with plenty of the clambering-from-ledge-to-ledge-while-the-wall-collapses stuff that seems de rigeur in modern action games, but it all gets a bit one note, and there’s rarely more than one route to take. What’s more, there are a lot of those always lovable quick-time-event sequences where survival relies on pressing the right button when prompted. These aren’t bad in that the timing is quite generous, but it’s weird that a game that strips quick-time-events out of combat puts so many elsewhere in the action.

Let’s make this clear so that there isn’t any confusion: God of War: Ascension is a perfectly decent hack-and-slash action game. Sadly, we expect more than perfectly decent from God of War, and here the real fault seems to be the pacing. Previous God of War games started big and then got bigger, mixing quieter moments of exploration and puzzle-solving with breathless bouts of combat that just wouldn’t quit. 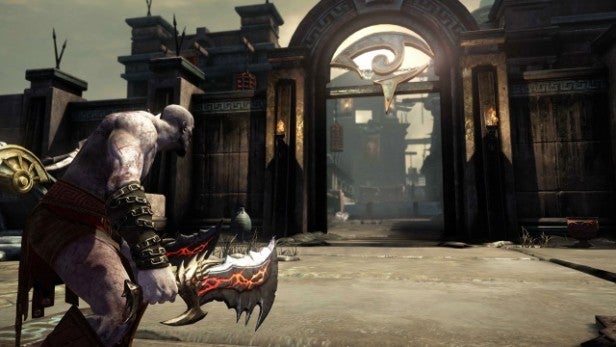 Ascension hasn’t quite got this right; it doesn’t feel unstoppable when it should feel unstoppable, or mysterious when it should feel mysterious. Sequences seem tacked together without a sense of a coherent storyline, and nothing feels that necessary about the tale. Ascension has the classic side-story problem: it fills in blank areas that didn’t really need filling without taking Kratos anywhere all that new.

It also has a horrible tendency to prolong battles past the point of welcome – simply throwing on more enemies doesn’t actually make the encounter more fun – and lengthy boss battles with multiple stages and no mid-fight checkpoint don’t exactly help. Where the earlier games had an almost perfect difficulty-curve and a fantastic sense of progression, Ascension seems a less-polished affair. It’s consistently good, but the old games were never less than great.

This is a little disappointing, however Ascension does introduce something new to compensate: competitive and co-op multiplayer modes. The first sees Trojans and Spartans facing off in a range of modes from all-against-all deathmatches to an objective-based mode, Favor (sic) of the Gods. The latter turns out to be much better than you might expect, with a great mix of control points to capture, chests to raid and numerous slayings to be made, with excellent maps full of traps, choke points and map-specific extras like attacking titans.

For co-op, we get a two-player mode which sees two players tackling waves of enemies together in arena settings, giving an experience not dissimilar to Gears of War’s Horde mode or Halo’s much-missed Firefight. It’s satisfyingly tough and the action is relentless. 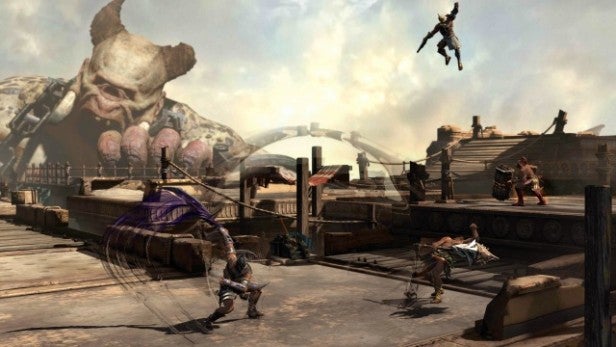 All the multiplayer modes benefit from a single experience system, unlocking new armour, new weapons and new perks and abilities as you level up the chart. Ascension’s new combat system also works well for multiplayer, with blocks and counters putting the focus on timing, and a selection of special capabilities defined by the player’s choice of deity at the outset. It’s a little too easy for higher-level players to simply spam newbies with heavy attacks and wipe them out in seconds, but extra weapons on the battlefield help even the odds, and the challenge isn’t insurmountable.

This is a solid expansion of the series into multiplayer territory, and reason enough for many Kratos-fans to buy the game. But is it enough to tip Ascension back towards greatness? Well, the multiplayer will keep you busy for a good few evenings, but it’s not compelling enough to keep you coming back over the long haul.

God of War: Ascension is a fine hack-and-slash action game, packed with all the violence and epic spectacle we’ve come to expect from the God of War series. It’s more demanding in terms of player skill, and Kratos and his world have never looked so good. Unfortunately though, and despite a strong multiplayer component, Ascension never quite feels essential. It lacks the drive of God of War III and doesn’t really add that much to what we’ve already seen before. This doesn’t mean the series is ready for the scrapheap, but we need something more next time around.