God Eater has been a big deal in Japan for quite a while, but the franchise only made it to Western shores a few short months ago with the launch of Resurrection – a title that failed to make serious waves, despite being fairly fun.

So you may be tempted to ignore God Eater 2 Rage Burst, which at first glance looks like a repackaged repeat of the series’ Monster Hunter-esque hack-and-slash gameplay. But you’d be making a serious mistake. God Eater 2 Rage Burst is one of the most frustratingly fun big-boss battle games currently available – if you have the patience to power through the first few hours. 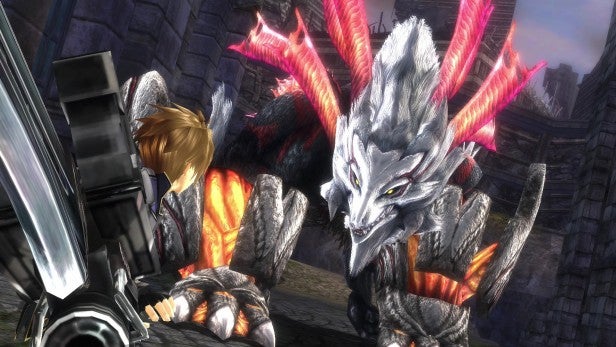 The story follows directly on from Resurrection, which comes bundled with the PS4 copy of Rage Burst, but the thread can easily be picked up without any knowledge of what’s happened before.

It sees you take the role of a newly qualified elite God Eater in a post-apocalyptic Japan that’s been ravaged by giant monsters, known as Aragami.

God Eaters are super-soldiers created and trained by the mysterious FENRIR organisation, and they wield giant weapons called God Arcs. God Arcs are multi-purpose living weapons that can morph between gun and melee modes, and they’re pretty much the only thing that can hurt Aragami.

The action kicks off in Friar fortress, with you joining the mysterious Blood God Eater squad, an elite team of God Eaters sent on particularly dangerous missions.

Sound familiar? It should, as the setup is pretty much identical to several popular animes. You could probably, word for word, swap “God Eater” for “Scout” and “Aragami” for “Titan” and the plot would accurately describe Attack on Titan. 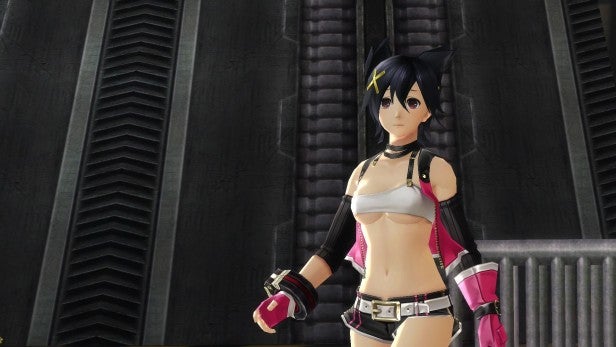 The sense of familiarity isn’t helped by God Eater’s character designs. Pretty much every character I met early on conformed to at least one anime archetype. The multitude of scantily clad female characters initially left me disinterested in taking advantage of the game’s conversation system – which is a problem, as it’s the main way you learn about the world of God Eater.

Friar acts as a central hub for the game and is the place you pick up missions and manage your team. The mission format is repetitive and never expands past tasking you to recruit three squad members and defeat a set number of Aragami or a big boss in a closed-off arena map. Squad members can be one of the AI controlled NPCs in Friar, or human players you recruit online.

Combat feels very basic at the game’s start. After picking which type of God Arc I wanted to use, Rage Burst offered woefully little tutelage and, outside of a few text-heavy pop-up windows, left me to figure things out for myself.

As a result, my early hunts followed a standard pattern. I’d run straight at the monsters and mash at the two melee buttons until the Aragami, or my avatar, ran out of health. This made for a pretty unrewarding experience and the casual way my character threw around his God Arc didn’t make things any more fun. Despite most of the God Arcs being twice the size of their wielders, my character acted like it weighed nothing and, as a result, hits didn’t feel anywhere near as weighty as I’d like.

Early missions are also a little too easy, as the AI-controlled squad members are incredibly proficient and will regularly kill Aragami on their own during the first five hours. Even with my basic button-bashing tactic, I still got SSS rankings at the end of my first six missions.

It was only after an epic amount of time playing monkey see, monkey do with my AI counterparts that I began to realise there was more to God Eater’s combat. After more button-bashing missions than I care to count, I spotted one of my NPCs switching his God Arc between gun melee and shield modes mid-combo. 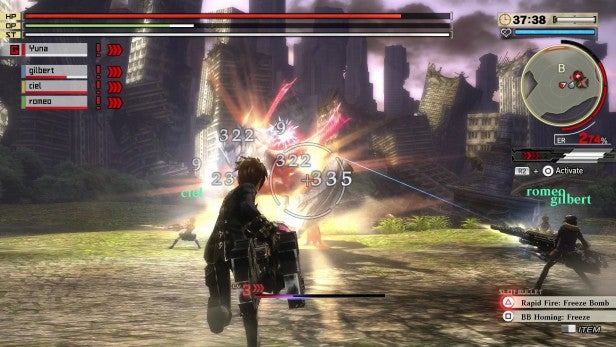 A bit later I saw one of them using different types of bullets to mine, and firing a massive devouring monster out of their God Arc to bite chunks out of the Aragami they were attacking. Finally, a little later, an end-of-mission cutscene referenced my avatar having had his “Blood Rage” activated.

With my curiosity piqued, I jumped into the game’s intimidatingly chaotic and detailed instructions to find out how I could replicate my NPCs’ actions and was introduced to Blood Rage’s crafting and combat systems.

The Devour attack is a nifty feature that can be activated mid-combo or as a standalone power strike. As well as inflicting regular damage, it also lets you devour an Aragami’s core, or harvest a bit of it. The items, plus various resources you can harvest and abandoned God Arcs you get awarded for completing missions, can then be used to craft items back at your homebase in Friar. These range from new skills for your weapon to entirely new God Arcs.

Blood Rages are a more specific type of skill that can be used to buff a core area of your main character’s stats, or add more damaging attacks to your arsenal. The skills are unlocked as rewards for playing a particular way. If you constantly use the melee version of your God Arc you’ll unlock and develop close-quarters-focused rages, while shooters will get bonuses to their weapon’s ranged mode.

Going further into the customisation sub-menus in Friar, I then realised I could load my gun with a multitude of different ammunition types and tinker with my companions’ behaviour in the Personnel sub-menu.

My journey down God Eater’s rabbit warren of hidden depth continued when I stumbled upon God Eaters’ bestiary, which offered insights into the strengths and weakness of the various monsters I’d encountered. The detailed breakdown helped me understand the importance of picking the right tools for the job before entering into each mission. 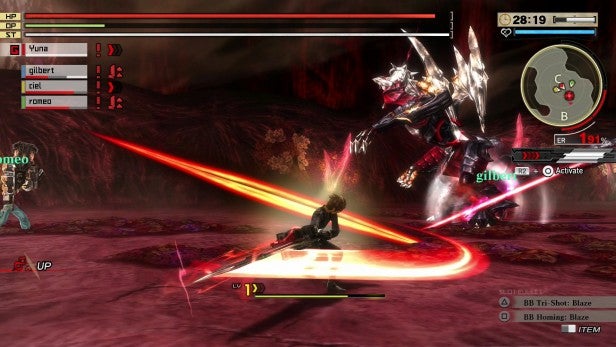 This point was further emphasised after I broke the nine-hour mark and got introduced to my first set of truly challenging missions. Charging in against a giant Aragami boss on a Hard mission for the first time, I realised I was using the completely wrong God Arc, bullet type and squad skills for the job. After watching my party’s melee attacks and fire-element shots inflict next to no damage for 10 minutes and realising I needed a tank companion to shift the monster’s focus from me, my lack of preparation became woefully apparent.

I was soon forced to return to home base with my tail between my legs. From there I read up on my opponent, re-skilled my NPCs, replaced my fire bullets with ice and equipped an appropriate Blood Rage. Upon returning to the fray my hard work was rewarded and I was able to complete the mission with a respectable AA rank.

Even then I’d only scratched the surface of God Eater’s squad and combat dynamics. It was only after another three hours of playing that I realised I could issue direct commands to my squad mid-mission.

The storyline isn’t the work of Shakespeare, but it also picks up steam after as you progress. The NPC squad members, who at first look like dull anime stereotypes, eventually begin to get fleshed out and gain a welcome layer of depth. 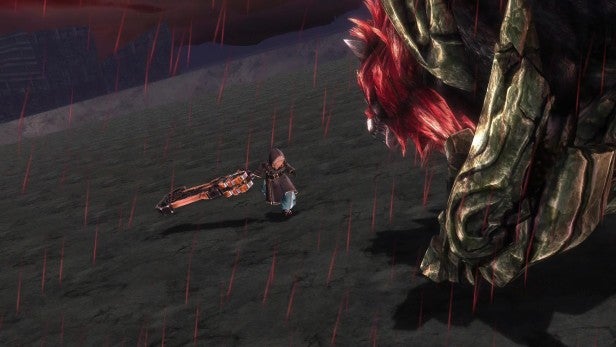 The annoying Ecchi elements I noticed earlier on, which saw most of the female characters wearing skimpy outfits and demonstrate the game’s oddly developed “jiggle” system, took a back seat and the plot took on an apocalyptic tone. The change was welcome and meant I was finally incentivised to begin talking to my AI team members and learn more about their pasts, which are pretty much uniformly tragic.

I began actually getting invested in the game and found myself ardently researching which tools I needed before each mission and working hard to optimise my loadout for the task at hand. The Friar sections also took on new life and saw me hunting down NPCs, eager to quiz them and find out more about their past and the God Eaters’ mythos.

God Eater 2 Rage Burst is a great Monster Hunter-style JRPG that takes a wee bit too long to get into its stride. The early story lacks any depth, and unimaginative character designs make it hard to invest in NPCs from the get-go. The lacklustre tutorial system also makes it all to easy to miss some of the more interesting character development, crafting and combat features.

Those who tough it out and take the time to learn the game’s subtleties will be in for a treat, though. Once you get your head around Rage Burst’s combat, the game gains a wonderfully strategic edge, and hunting down each big-game Aragami becomes a unique and rewarding challenge.