In every way the GoCycle GX is a quality ebike, taking the pain out of cycling and making it effortless to get up to speed, go the distance and climb hills. This model retains everything that has made previous GoCycle bikes a pleasure to ride, from slick design to the smooth motor that kicks in when there's enough torque. In addition, you get a great folding bike that you can quickly fold down and fit in a boot or on public transport giving you the best of both worlds: a great road bike and a great commuter bike.

One of the pioneers of electric bikes, GoCycle has now turned its attention to the commuter market to bring a bike that’s easier to fold for transporting on the train or tube. While it may fold up easier than its predecessors, the GoCycle GX retains the same quality ride as its siblings. Fun to ride, smooth on the road and with a responsive electric assist, the GoCycle GX is the ultimate folding bike.

GoCycle GX – It retains the futuristic look, but folds down in half for easy storage

The key thing about GoCycle’s electric bikes is that they were built from scratch to be electric, rather than simply adding an electric motor to an existing frame. This gives the GoCycle GX the same futuristic look as the other models in the range. From the hidden drive train (there’s no worry about dirtying your clothes by rubbing up against an oily chain), to the rear suspension and twist gear shift, the GX is every bit designed to be electric first. 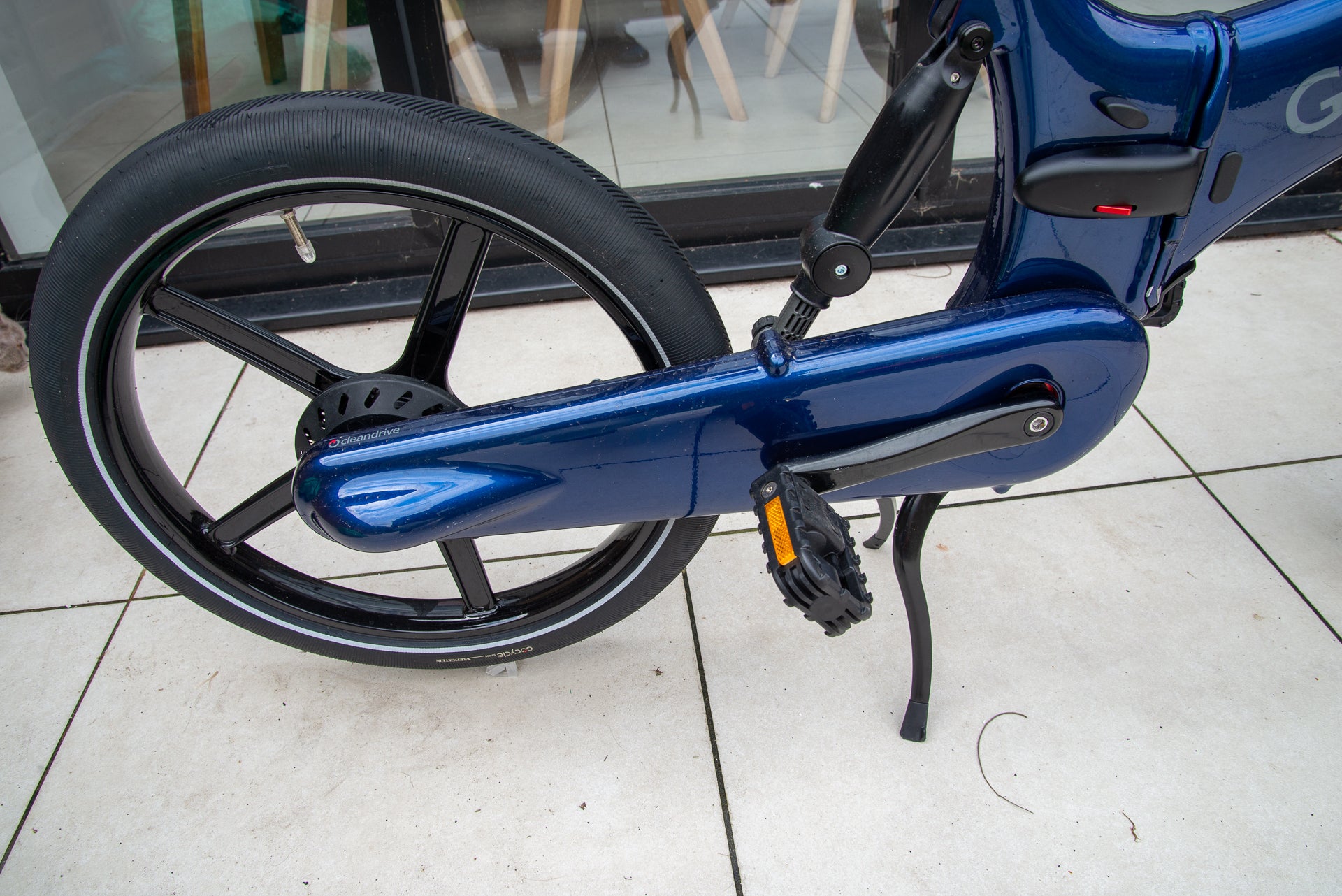 The hidden drive train makes this a clean ride

The only minor disappointment, especially given the high price of the bike, is that you don’t get mudguards as standard and have to pay extra for them.

Although the GoCycle GS can be folded down if you remove the wheels, the GX has been designed to fold quickly, much like a Dahon or Brompton. With the stand down, the bike folds in half, and handlebars fold over to sit next to the front wheel, held in place with a rubber clip. The pedals then fold down to keep them out of the way. With a bit of practice, you can fold or unfold within 20 seconds. 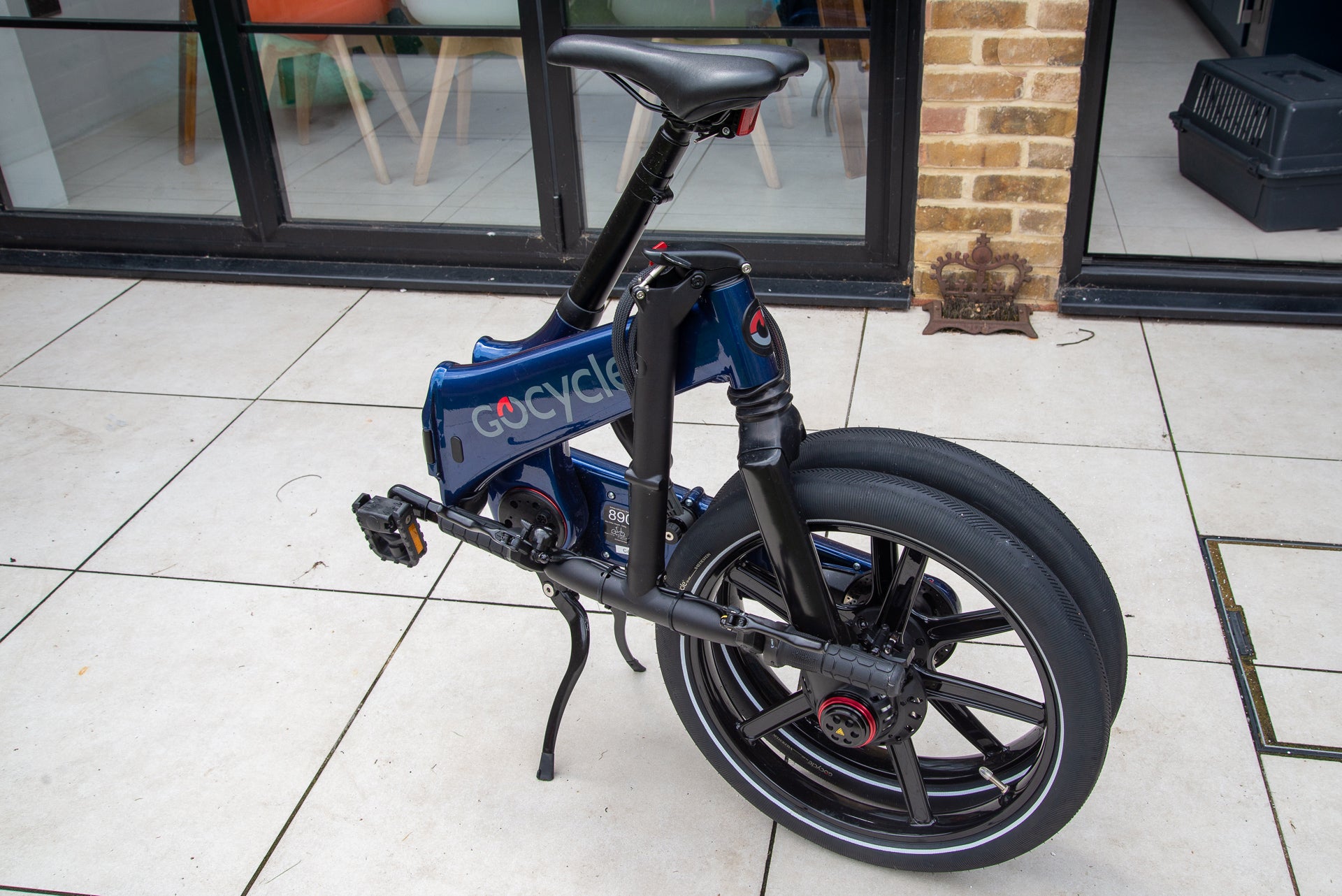 Folded down, the bike is very small

Once folded, the seat remains standing up, but you can use this as a handle, tilting the bike back to push it around. You’ll want to do this, as the bike weighs a hefty 17.8kg. You can lug it up some stairs but the GX isn’t particularly easy to carry around, so wheeling it around is the preferable option. 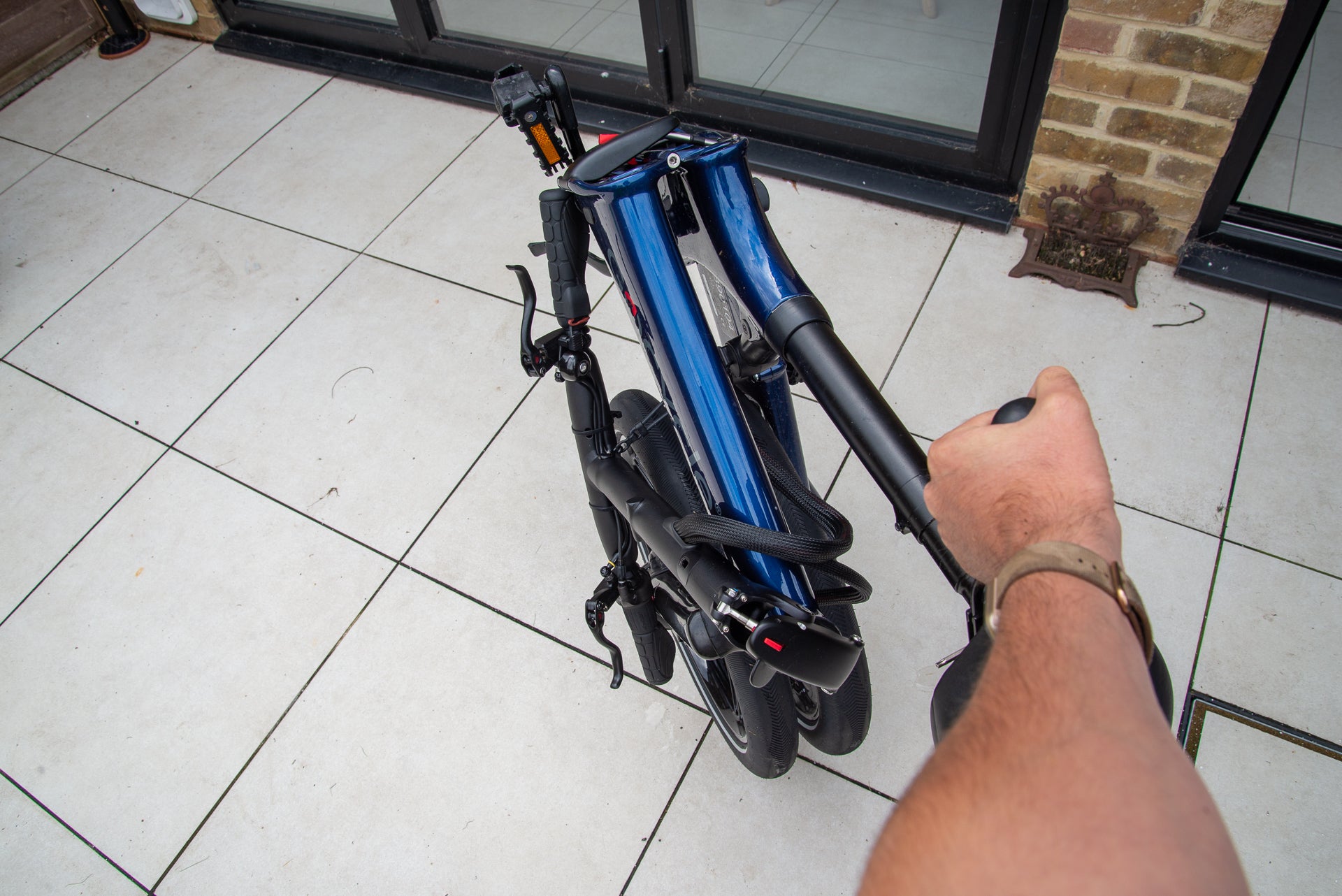 It’s heavy, but the fact that you can wheel the bike around makes it easy to move

The seat can come off and you can store it between the two halves of the folded frame if you need to get the bike down a bit smaller– say, to stash it in a car boot.

Related: Ebike vs Road bike: Should you go electric?

GoCycle GX – With its large wheels and chunky tires, it’s more than just a commuter bike

GoCycle has fitted the GX with all-weather 20 x 2.25in tyres. These chunky tyres give a smooth ride and make the bike more than just a bike for riding those last few streets to the office. In fact, as much as with the other models in the range, the GX is suitable for cycling where you want it. The suspension helps smooth out the road, too. 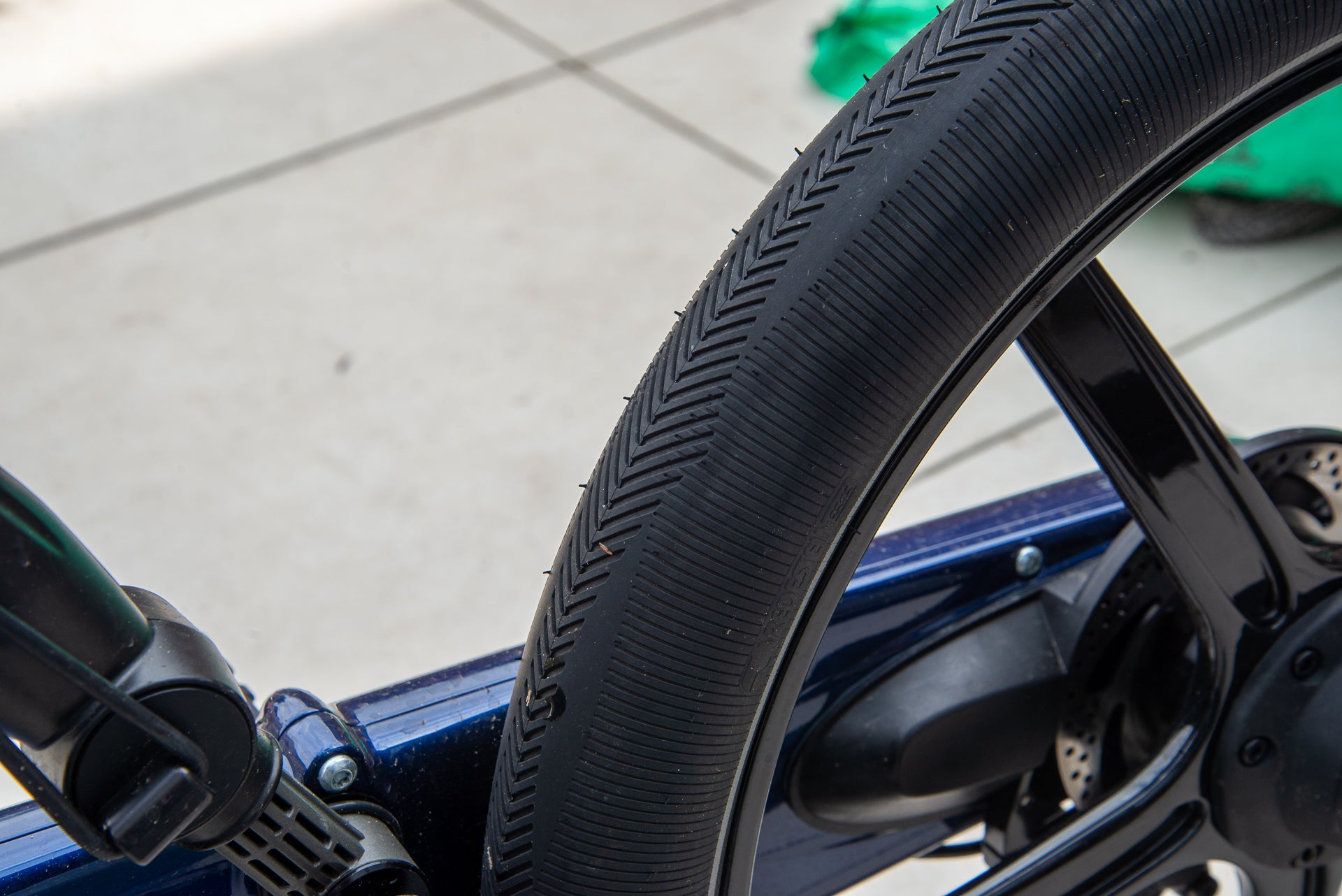 It’s the electric drive that makes the GoCycle GX a real pleasure to ride. As with the GS, the GX has the same 500W motor with traction control, although in the EU it’s limited to 250W. Although the bike is capable of 25mph, EU rules limit it to 15.5mph.

During the initial setup, you have to select where you’re located, with the smartphone app uploading the matching firmware to the bike. This part of the app is rather horrible: it looks and feels like the developers wrote some basic test software and forgot to put a more polished front end on it.

Fortunately, the setup needs to be done only once, after which you get a smarter app interface, giving you control over the ride mode. The mode defines when the motor kicks in to assist, using the pedal’s torque sensor.

City mode is the default, requiring little effort to start the motor, which continues powering the bike until it hits the maximum speed. Eco mode is similar, but requires more pedal effort. Then there’s an on-demand mode, where you have to press the red button on the handlebars to start the motor (this button works in any mode to give you a boost when you need it). Finally, there’s a custom mode that lets you configure the bike the way you want it. For most people, City mode will do the job. 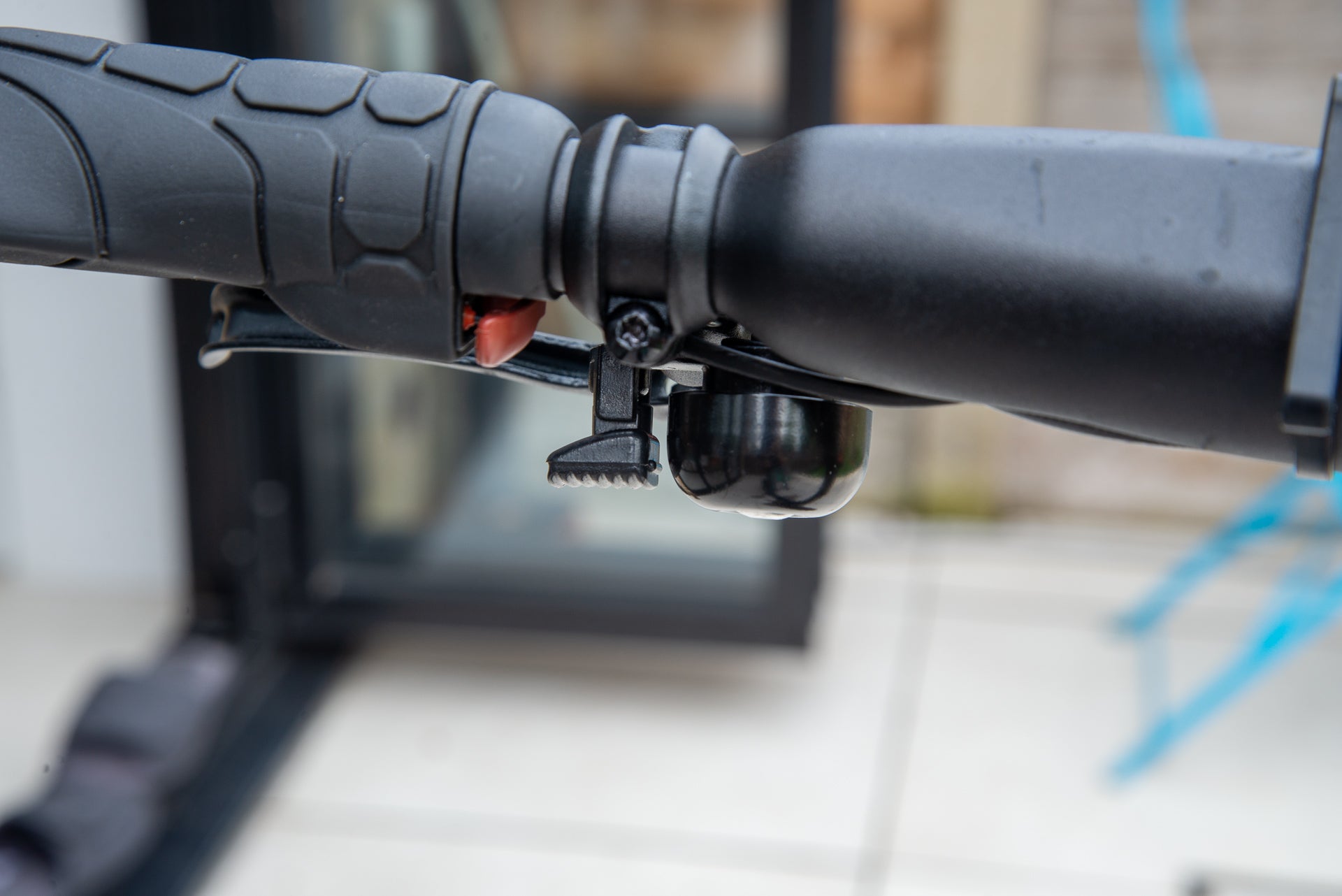 The boost button kicks the motor into action on demand

It has to be said that riding the GoCycle GX is incredible. Thanks to that torque sensor, the motor kicks in when you’re generating enough power, seamlessly pushing you forward. On the flat, you accelerate quickly, easily keeping up with cars on the road and getting up to speed. On hills, you just pedal away and the motor does the rest for you, making it easy to climb the steepest of inclines without having to put in any real effort.

On my test route, involving a couple of steep hills, the power of GoCycle GX meant that I completed the route faster than in a car, able to move safely through standing traffic and pulling off quickly from the lights.

There are three gears to choose from, which you select by twisting the right handle. The shift is so smooth that you can’t even feel it, effortlessly moving up or down through the gears. If there’s one minor complaint it’s that the top gear isn’t quite fast enough. With the motor in action, it’s easy to get up to 15.5mph, but a higher gear would let you push the bike more easily to faster speeds; instead, I felt as though I’d hit the limit of the bike. 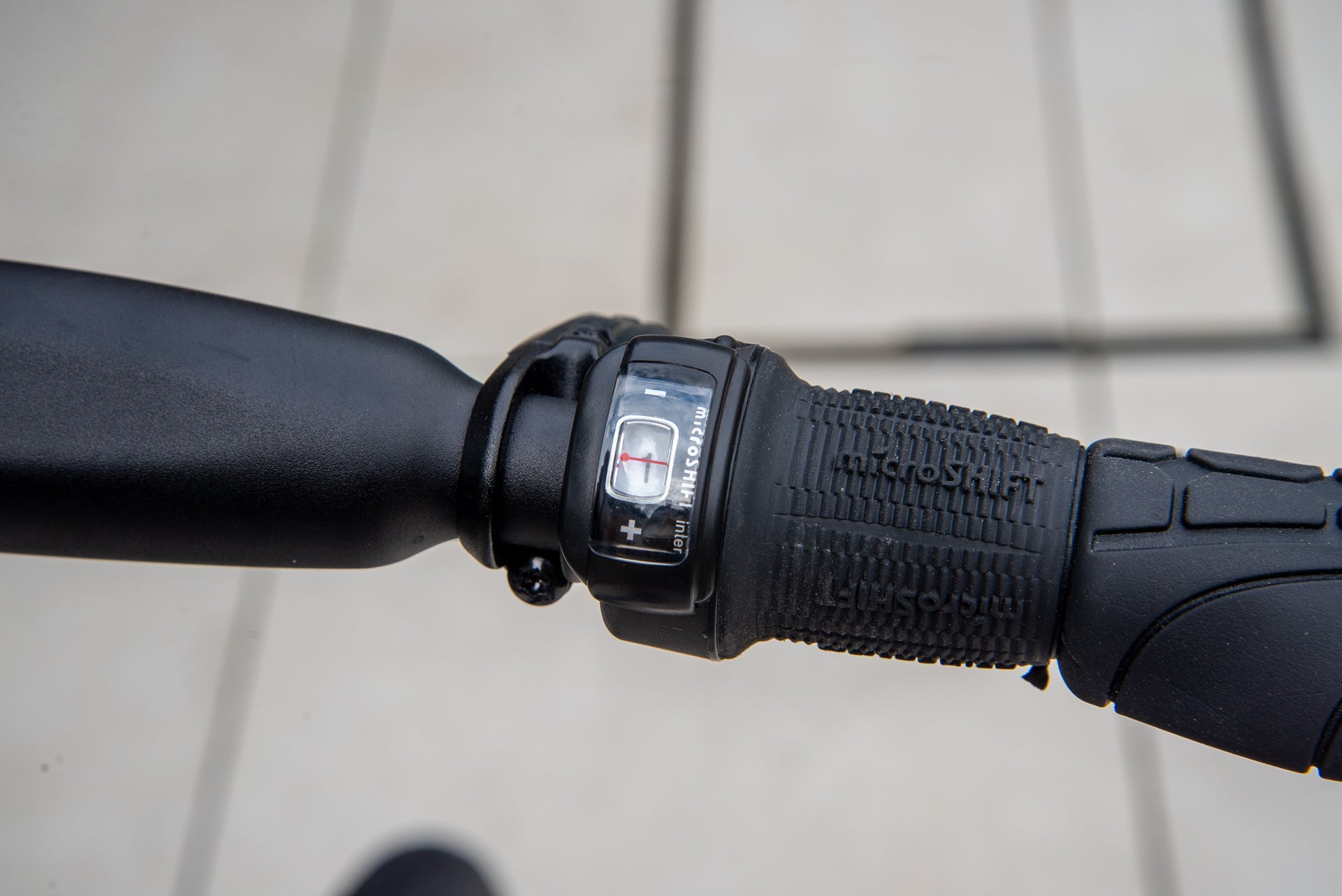 The gear shift is so smooth

If you have the app open when riding, with your phone in the smartphone mount, you can see your current speed, distance, charge and gear. Plus, you can switch cycling mode on the fly. Alternatively, you can use any other app on your phone, say opening up Google Maps for directions. 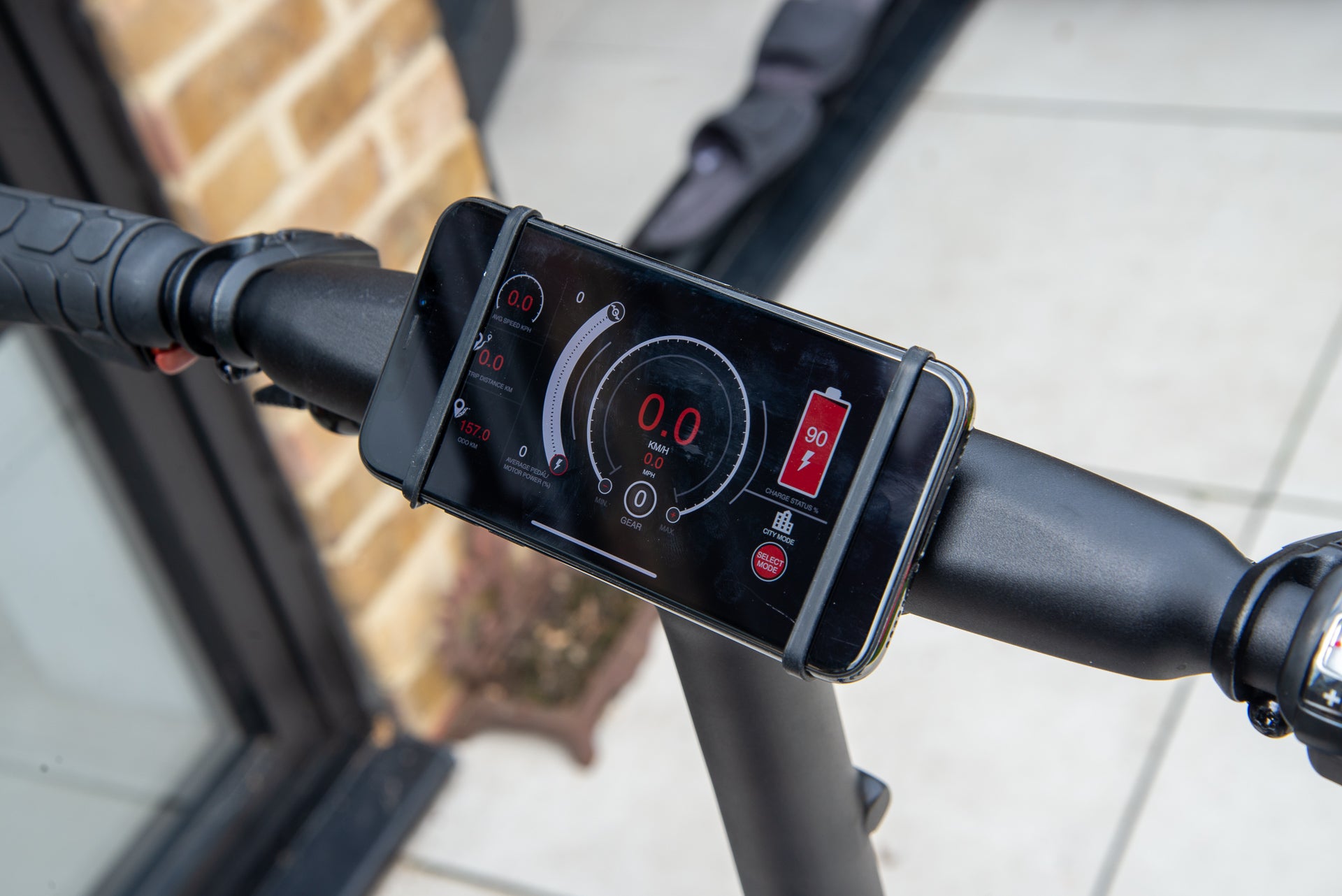 The battery gives you a range of up to 40 miles, depending on how much work the motor has to do, and how much you tap the boost button. Based on my rides, 40 miles is certainly achievable, but with this kind of battery life, it’s safe to say that with an average commute, you should only need to charge the bike once or twice.

You can charge the battery while it’s inserted into the bike, but you can remove it and charge it separately instead, if you prefer or don’t have bike storage with power in it. 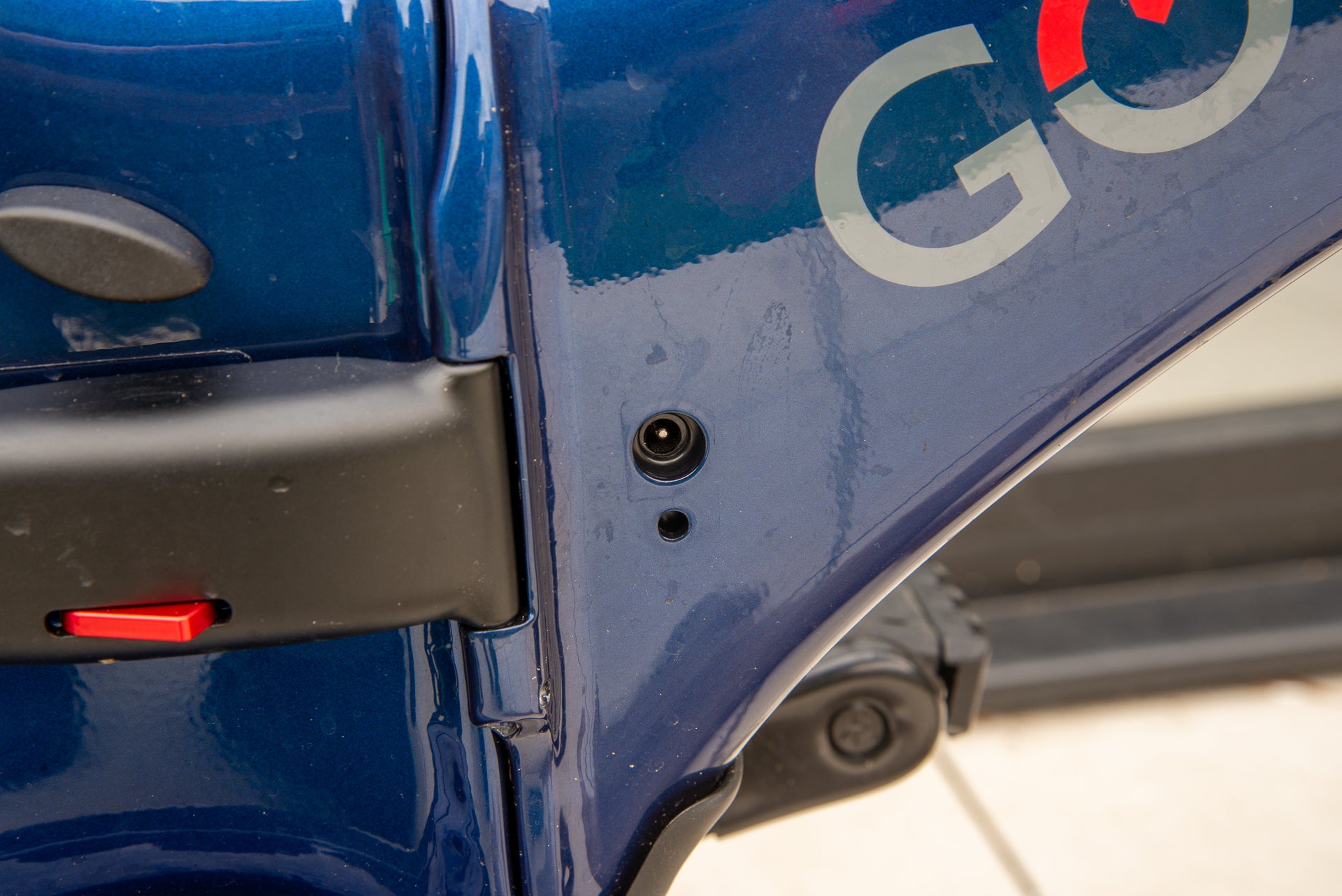 You get a very basic battery meter on the handlebars, with five LEDs counting down showing you the charge level. Still, it’s enough to warn you when you’re getting low and might need to put the bike on charge. 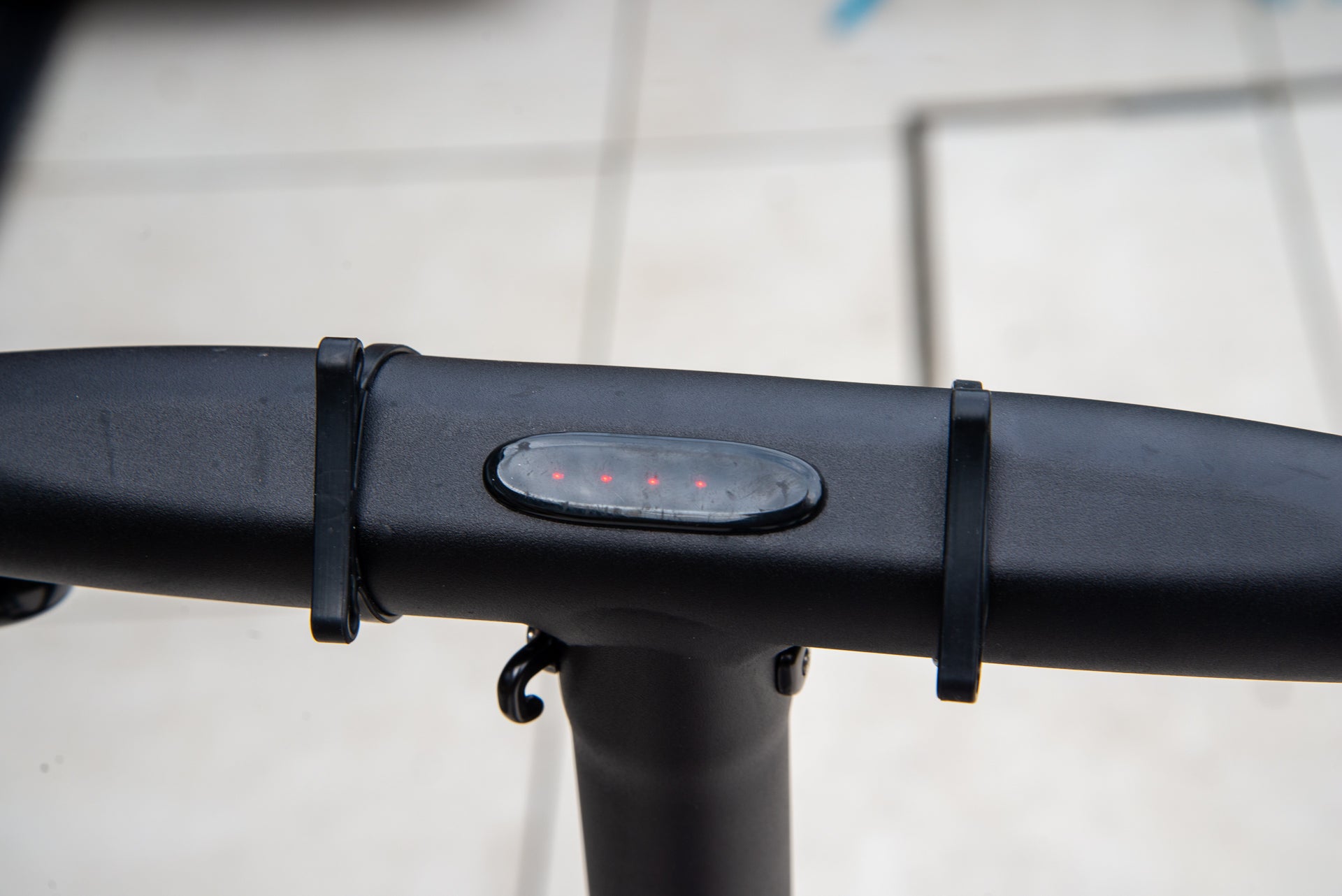 Should I buy the GoCycle GX?

At £2899 the GoCycle GX is an expensive purchase. It’s even more expensive than the GoCycle GS, which offers the same performance. What you’re paying for here is the smarter, easy-fold design, which becomes essential if you intend to take your bike on public transport. If you don’t, you may as well save the cash and go for the GS instead.

Aside from a couple of small complaints (a rather basic app and the lack of a faster gear), the GoCycle GX is an amazing accomplishment. With its large, wide tyres, the GX is comfortable to ride on any road surface. But it’s the motor that sets it apart from the competition, smoothly kicking in to whisk you off at speed or to make a mockery of hills.

As the ride is so good, I found that the GoCycle GX was a bike that I wanted to ride everywhere, turning journeys from a grind into an adventure. So, yes, this bike is expensive, but as you speed off with a smile on your face, you won’t regret spending the money.