When Alan Turing was laying down the laws of computer science that, decades later, would go on to be the basis of pretty much every PC, Mac and smartphone we all now use daily, it’s unlikely he envisioned his genius would aid the development of something like Goat Simulator.

And when we say ‘something’, we haven’t plumped for that word out of laziness or an extended New Year’s Eve induced hangover: it’s genuinely hard to define just what Goat Simulator is.

Bizarrely, much like A Sailor’s Dream before it – though for entirely different reasons – Coffee Stain Studios’ cult smash raises the age old question of just what a game is in the first place. 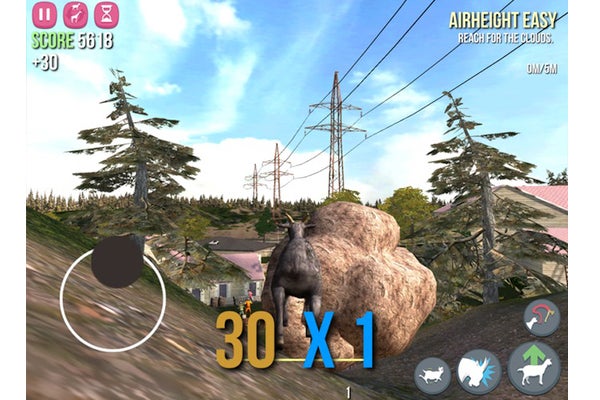 If we’re going to be liberal enough to pin Goat Simulator down as a game, however, its closest cousin is arguably Grand Theft Auto. Strip out the missions and replace the guns, gangsters and prostitutes with a series of goats, and you’ve pretty much summarised what’s on offer here in a nutshell. What Coffee Stain Studios has produced is an open world game that positively revels in its own defects – and that, if nothing else, is what sets Goat Simulator apart from the scores of other games on the App Store.

While thousands of developers across the globe regularly pull their hair out whenever a bug is reported, Coffee Stain Studios wants you to celebrate such faults – it wants you to find them, exploit them, and then play on to find even more. 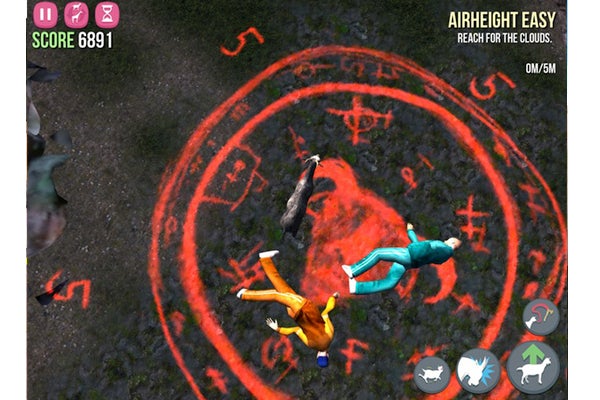 All such bugs take place in what is actually a stripped back set up: You take charge of a goat and control his movements around a fairly generic and nondescript American town full of roads, rockies and rather dense inhabitants. At your disposal is the ability to run, jump, ram, lick (with your especially long tongue) and, amusingly, fall to the floor and flop around as if having some kind of attack. Just how, when and arguably why you use these abilities is up to you.

And, aside from the odd prompt as to things you can get up to – the game’s tutorial like reward system scoring points for everything from jumping to needlessly ramming over the town’s inhabitants – you’re left to do as you please. Fancy charging into a group of cars, causing them to explode and residents to run off in panic, often sprinting directly into level architecture and rendering themselves completely paralysed? Go for it. Want to attach residents to your tongue, dragging them to a sacrificial spot up in the hills for no reason whatsoever? Have a ball. Just want to cause a whole heap of carnage for the fun of it? That’s basically the aim. 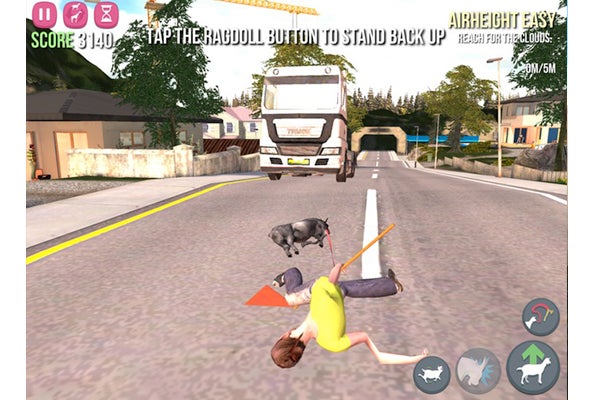 In fact, you could say this is where Goat Simulator is just a little bit genius. Knowing that huge numbers of gamers take on sandbox games not to complete linear missions but, rather, to mess around with the world on offer and see if they can break it, developer Coffee Stain Studios has delivered a world without real goals that’s already utterly broken. It’s like the gaming equivalent of a comedy roast – there are so many things left intentionally botched within play that you can attack Goat Simulator from any angle and almost certainly score a hit.

But like any joke, once you’ve heard it a few times, the humour tends to run thin. After three or four extended play sessions on Goat Simulator, it remains to be seen just what play has to offer. With no real set structure or even goals beyond exploration, once you’ve had a wander, attached a few folk to your tongue, triggered a series of horrible deaths in ever inventive ways and randomly dropped to the floor for a quick spasm or two, it’s hard to know why you’d start Goat Simulator up again. 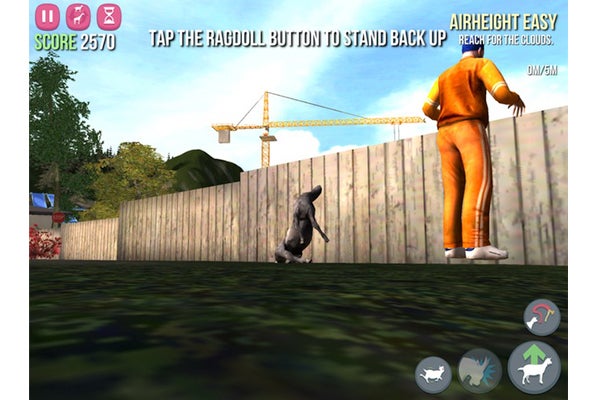 So, how do you rate a game that’s intentionally broken? A solid, universal score isn’t really possible. Instead, it’s best to break down Goat Simulator into two halves; while the joke is fresh, the fun is bountiful, and you could easily peg play as high as an eight out of ten, but as soon as it starts to wear thin, there’s very little reason to make a return trip, meaning you could easily knock two or more points of that score.

Essentially, Goat Simulator has the characteristics of an internet meme – of the time, perfect to share with friends and highly amusing at first, but much like yesterday’s newspaper, its shelf life is extremely limited, and it’s unlikely Coffee Stain Studios’ latest will make all too much more of an impact as 2015 rolls by.

Verdict
An intentionally broken game, Goat Simulator’s hamstrung sandbox is designed to titillate and amuse, serving up bugs and faults like candy. All too soon, however, the laughs dry up, and what you’re left with feels like yesterdays news, with all its tricks let out of the box and with very little left to take its place.