You know how it is when you’re expecting one thing and you get something else? Like when you pick a Revel out of the packet expecting the coffee creme and get that nasty orange one instead (you’re mad Stu, Orange is the best Revel – ed.). Sometimes it’s a pleasant surprise, sometimes it’s not, but it’s always a bit of a surprise. Well, Go! Go! Break Steady left me feeling a bit like that at first. From press releases and the usual pre-launch bumf I had the game pegged as a cool rhythm action game with an eighties breakdancing flavour; a kind of mix of Parappa the Rapper, Elite Beat Agents and Breakdance 2: Electric Boogaloo. 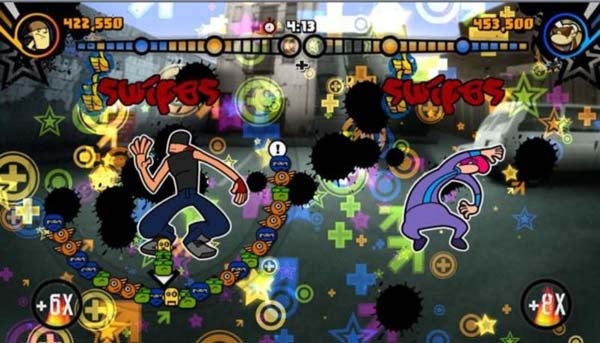 As one who lived with this stuff back in the day – I still remember my older brother practicing caterpillers, windmills and headspins on the living-room carpet before a big face off at the legendary local Scout’s disco – I was looking for a mix of groovy styles, casual charm and warm nostalgia. I wasn’t expecting anything brilliant, just something fun to pass a few hours. But there’s more to Go! Go! Break Steady than it seems. I’m not sure even Ozone and Turbo would have been able to make head or tail of this one. 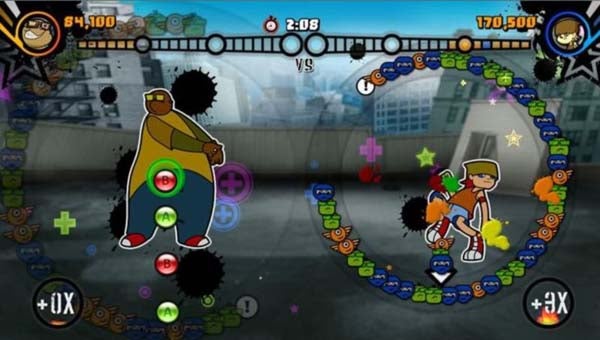 Here’s how it works. Your breakdance crew (and it’s a pretty motley one) is entering a city-wide championship. In each stage they have to battle against a DJ, spinning out some mean tracks on the wheels of steel – as I think the young people used to say – and that means laying down some cool moves of their own. Basically, as the music plays, a sequence of colour-coded notes streams towards the circle in the middle of the screen. As you might expect, your task is to press the appropriately coloured button when the note is in the circle, which keeps your hero or heroine jiggling or spinning along to the beat in a way that my brother would have been proud of. 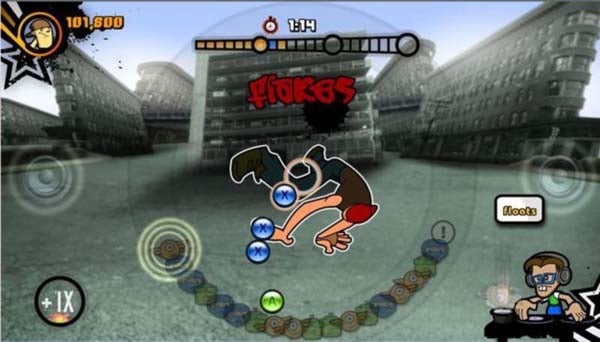 Normally in a game of this type, the gameplay begins and ends there. The notes get faster and the sequences get more challenging as you move from track to track, but that’s about it. Not so with Go! Go! Break Steady. As your guy or girl dances in the middle of the screen, they’re stealthily being surrounded by nasty little beings known as ‘beatniks.’ If the beatniks encircle you completely at any point, it’s game over. If there are still any in the circle around you at the end of the song, it’s game over. Only if you can get rid of all of them before the music fades will you win and move on to the next section. So how do you do that? Well, after you complete a sequence of notes you can fire a beatnik of your own into the circle. If he hooks up with two or more beatniks of the same colour, they disappear. At this point, the beatniks either side fall in to the fill the gap, and should three or more of the same colour collide they’ll be vaporised as well. 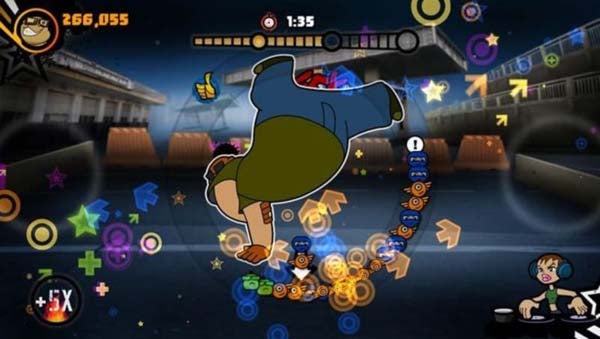 In other words, this is part rhythm action game and part Zuma-style puzzler, though it’s not so much that the two have been mixed together as that you switch between the two styles. This is where things get tricky, as switching from note matching to beatnik chaining takes more than a little getting used to. Most straight rhythm action games are pretty accessible in the early stages, but Go! Go! Break Steady takes time to settle into. For a while you might struggle to get through even the first track. Then you find yourself getting into the zone as far as the note matching goes, and find you can concentrate more on getting three beatniks together or – better still – setting up potential chains of collisions. After a time it all comes together. 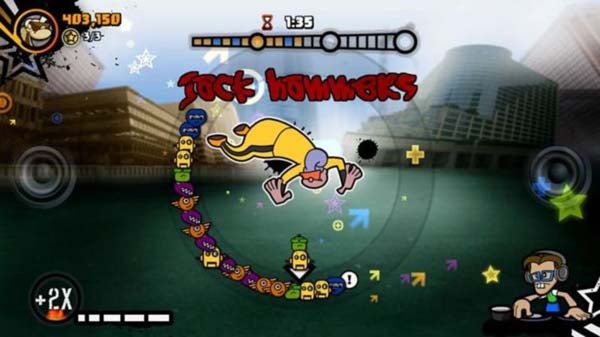 All the same, you can’t help noticing that the rhythm action element isn’t all that strong. True, the music – an excellent range of hip-hop, big beat and funk – and the dancing take centre stage, but the actual sequence and pacing of notes doesn’t always seem directly related to it. One of the great things about the rhythm action game, from Parappa the Rapper to Amplitude to Elite Beat Agents to Guitar Hero III, is that the music and your interactions seem to merge together as you go on, so that you can’t imagine the game beats without the audio beats, and visa versa. That rarely happens in Go! Go! Break Steady. In a lot of cases, the music and the gameplay seem strangely divorced. 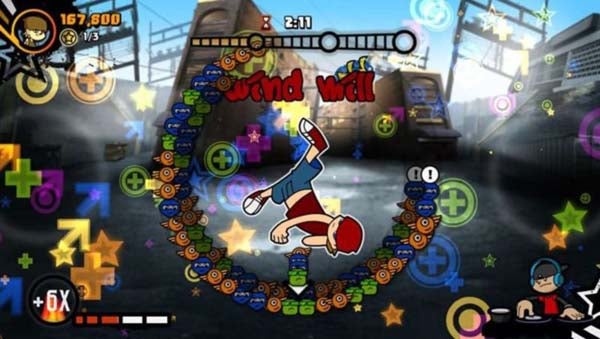 This isn’t a disaster. The note matching and puzzle elements both work well, and the game is quite addictive. The main single-player mode features six characters, each with five tracks to get through, and as you move through characters, scenarios and difficulty levels the game throws in some tricky sequences and some nasty ‘chords’ (where you need to press two buttons simultaneously) and trigger or D-pad buttons. There’s not an awful lot of variety to the gameplay, but there is a sense of progression and a meaty challenge. Plus, when the main competition is over, there’s still an endurance mode (survive for as long as you can before the beatniks get you) and multiplayer modes, though sadly a lack of any games running prevented me from checking these out. 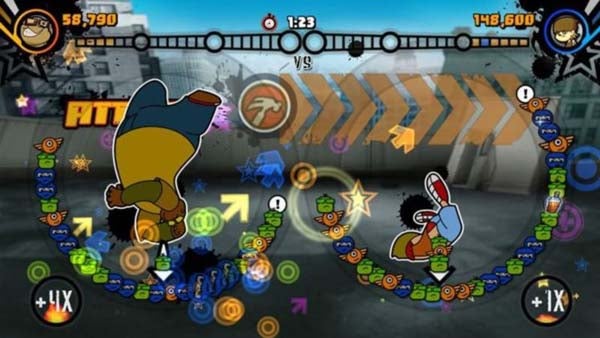 The visuals, meanwhile, do a great job of turning some not really all that cool when you think about it gameplay concepts into something fun, funky and appealing. The backgrounds are simple, but the dancers are full of character and well animated, and even the DJs have a bit of personality. As with the best Flash games (which Go! Go! Break Steady sometimes resembles) it’s a fine example of how some quality illustration and visual nouse can make up for a lack of technical wizardry.


Go! Go! Break Steady is an enjoyable Live Arcade title and a refreshing change from the usual diet of retro shooters and puzzle games on the service. Microsoft often likes to waffle on about how its casual games can appeal to a wider audience outside the 360’s hardcore shooter, RPG and racing game-obsessed fanbase, and this game seems ideal for that and may go down well with the post-pub gaming crowd. 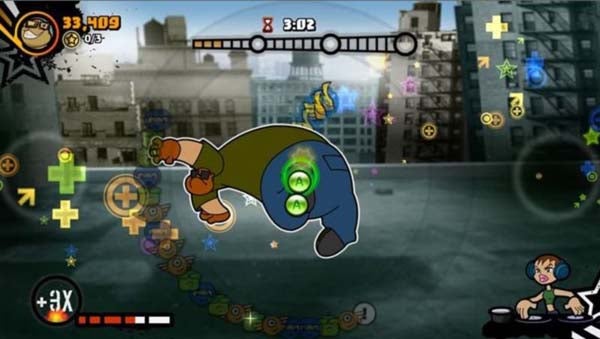 All the same, it still feels rather slight and while we can expect some song DLC to extend its lifespan, I can’t see that helping expand the game’s limited long-term appeal that much. After all, the music isn’t really the point as it is with, say, Guitar Hero anyway. Given the low price, you could do much worse than splash out on Go! Go! Break Steady and enjoy an evening or two of entertainment with your friends, but it’s not quite an essential Arcade hit.


A quirky and engaging mix of rhythm action and puzzle gameplay with some nice stylised graphics – it’s just a little too slight to be a must-have Arcade download.