What is the Gioteck HC-4?

There are lots of premium gaming headsets on the market, with options such as surround sound, noise cancellation and wireless connectivity demanding a premium price. However, most gamers don’t really need such features – they’d be much better off with a basic headset, but one that drastically improves on the headsets that often come with their consoles.

This is where the Gioteck HC-4 comes in. At £29.99, it’s significantly cheaper than most other gaming headsets such as the Turtle Beach Ear Force P12 (£44.99), although it’s not quite as cheap as the Tritton Kama (£24.99). Like those headsets, it’s targeted at PS4 users, but it works with anything that has a 3.5mm audio input, such as mobiles, tablets, laptops and portable gaming devices.

The HC-4 is distinguished by its built-in rechargeable battery, which can optionally be used to amplify the volume of the headset. It means that the headset can go really loud, so much so that you don’t really miss having active noise cancellation. It charges using the included micro-USB cable, but if the battery runs out, you can still keep listening, just at lower volumes.

What’s more noteworthy, though, is the overall quality of the HC-4. Sure, it’s pretty basic when it comes to features, and it’s not as comfortable as other headsets made from premium materials such as leatherette. However, it’s solidly built, the speakers and microphone are good, and it works with pretty much every device on the market. If you’re looking to get into the world of gaming headsets, the HC-4 is a great place to start. 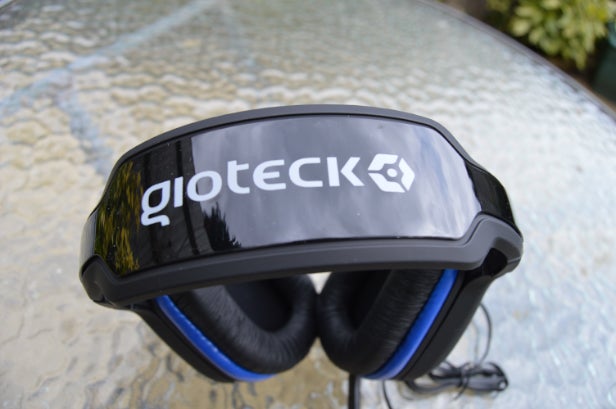 Gioteck has a lot of gaming accessories, including stands, controllers, cables and headsets. It tends to target the value end of the market, with products that often undercut official offerings (such as PlayStation controllers, for example). The HC-4 is no different – at £29.99, it’s one of the cheapest gaming headsets on the market.

The HC-4 is a relatively simple headset, with only one cable leading from the left earcup to whatever device you want to connect to. This 3.5mm adaptor is used to transmit both audio and microphone signals. The HC-4’s box clearly seems to be pitching the headset to PS4 owners (something the blue colour scheme also reinforces), but it will work with anything that has a headphone adaptor, such as a computer, tablet, mobile phone or portable games console. It will also work with the Xbox One, although you need to buy a separate adapter.

Gioteck’s headset may be cheap, but it certainly doesn’t look it. It’s well constructed; solid enough to withstand both being put in a backpack and dropped on a wooden floor. The padding around the ears and headband isn’t as soft as the leatherette finishes on more premium headsets, but it’s still soft and comfortable against the skin for long periods. It’s also a nice weight at 309g; not so heavy it weighs your head down during long gaming periods, and not so light it feels flimsy. 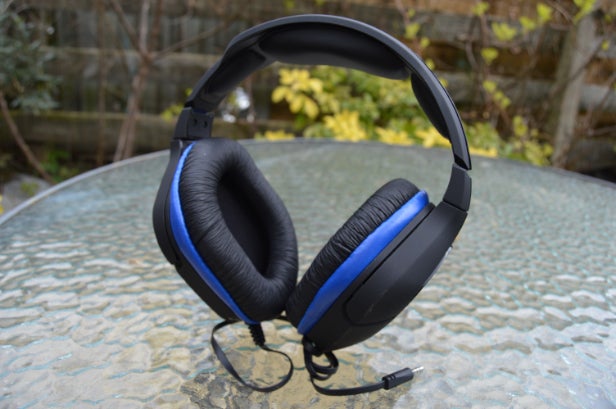 The HC-4 is also relatively stylish, at least as far as gaming headsets go. The blue-and-black colour scheme is relatively cool, and the subtle Gioteck logos on the ear cups aren’t too obnoxious. The “Gioteck” brand name written across the headband is the only thing that spoils the relatively understated design.

The main feature that will stop you wearing the HC-4 in public is that the microphone isn’t detachable, although it does move into a horizontal position that makes it less protrudingly obvious. The short 60cm headphone cable is also an annoyance for those who want to take the HC-4 on the move, as that’s only just long enough from your head to your trouser pocket.

The HC-4 has four buttons on the left earcup which are used when the headset is turned on and drawing power from the batteries. One button turns the headset on and off, two buttons shift the volume up and down, and a final button turns the mic on and off. The mic button performs different functions depending on what system you’re using; on our Macbook, it paused and unpaused music, which was quite useful. These buttons are large enough for your hand to find without needing to take the headset off, but not so big that you press them accidentally.

The only other thing included in the HC-4 package is a micro-USB cable, which is used to recharge the headset’s internal battery. This battery amplifies the sound from the headset, although it’s not required for the headset to work. It’s great that Gioteck included the micro-USB cable in the box, but as it’s the same cable used to charge PS4 controllers, chances are you already have one connected to your console. 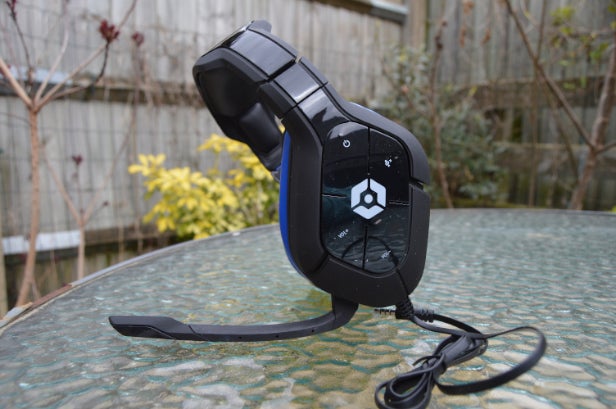 The Gioteck HC-4 is a simple stereo headset – there are no bells and whistles when it comes to surround sound or noise cancellation. To be honest, that’s probably a good thing for most people; we love the Turtle Beach Elite 800 headset, but all of its various presets and options can actually be an annoyance.

You shouldn’t buy the HC-4 expecting an sound as subtle and detailed as headsets that cost twice this price, but for the money, they put in an excellent performance. The 40mm drivers are more than up to producing deep bass for action games, while ample treble performance means that voices and musical instruments also remain clear. If you play Call of Duty: Advanced Warfare, for example, then the HC-4’s work great.

The HC-4s really excel in how loud they go. We’ve often been disappointed at just how weak a lot of gaming headsets are, especially from Turtle Beach; they go loud, but not really loud. With the battery-enhanced amplifier engaged, the HC-4s go so loud that you’ll do your ears some damage and annoy anyone else who happens to be in the vicinity. It’s important to note that the HC-4 isn’t a noise-cancelling headset, but if you’re eyeing up a pair of headphones to take with you on a flight, then they go loud enough to block out most ambient sound. And if the battery runs out, you don’t need to recharge the battery immediately, as the HC-4 headset will work passively, just at lower volumes. In our tests, the battery lasted just under 8 hours from a full charge. 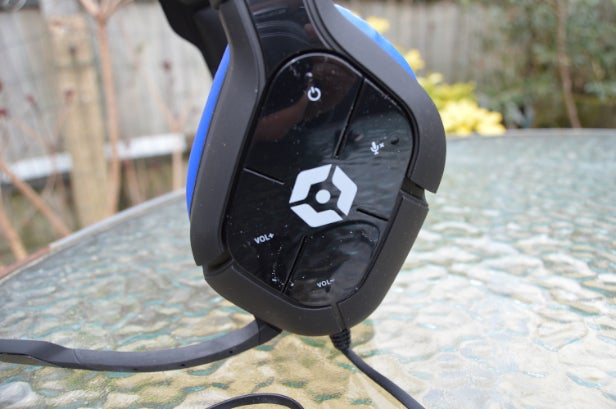 The microphone on the HC-4 is well designed; the arm pivots about 90 degrees around the left earcup, which allows you to fold it upwards when not in use. The arm is also relatively rigid, so you can bend it towards or away from your mouth depending on how loud your voice is. It’s just a shame that this component isn’t removable, but that’s too much to expect from a headset at this price.

Voice chat sounded good, and other players said they could hear us clearly in online games. There aren’t any advanced mic features, such as intelligent chat boost to increase the voice volume when in-game sounds are too loud, but again, most players don’t really need this feature. At this price, the main thing to note is how much better the HC-4 is for communicating with other players online when compared to the headset that comes bundled with the PS4. 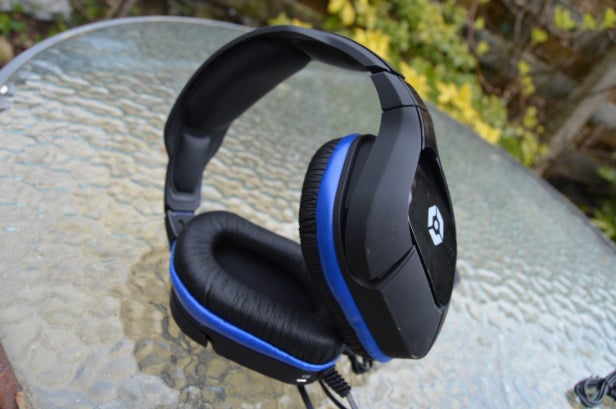 Should I buy the Gioteck HC-4?

If you’re just using the default headset that came with your games console, then it’s well worth spending £30 on the HC-4 for the quality jump it offers. It’s a comfortable, well-designed headset that noticeably improves the audio and voice chat experience when playing your favourite online games.

Audio quality is impressive for a headset that’s so cheap, in particular in how loud it goes once amplification is engaged. It’s slightly annoying that you need to recharge it for this reason, but as the headset still works when the battery is dead, there’s little reason to complain.

The Gioteck HC-4 is cheap and cheerful, but it’s a well-made, sounds great and works with most gaming platforms, which makes it a bargain for under £30.