Gigabyte Sabre: An opening look at the world’s first Intel Core i7+ laptop

Gigabyte’s new Sabre 15 and Sabre 17 are two of the latest affordable big-screen laptops to come out of Computex 2018. At first glance there’s not much differentiating them from rivals such as the MSI GF63, which has a fairly similar design and feature set.

However, under the hood these two laptops have one unique feature: their use of Intel’s new Core i7+ CPU.

The CPU adds support for Intel’s Optane storage technology, which claims to let HDDs offer gamers SSD-level speeds. If it works like Intel claims, this could make the Sabres two of the best value big-screen gaming laptops to arrive this year. 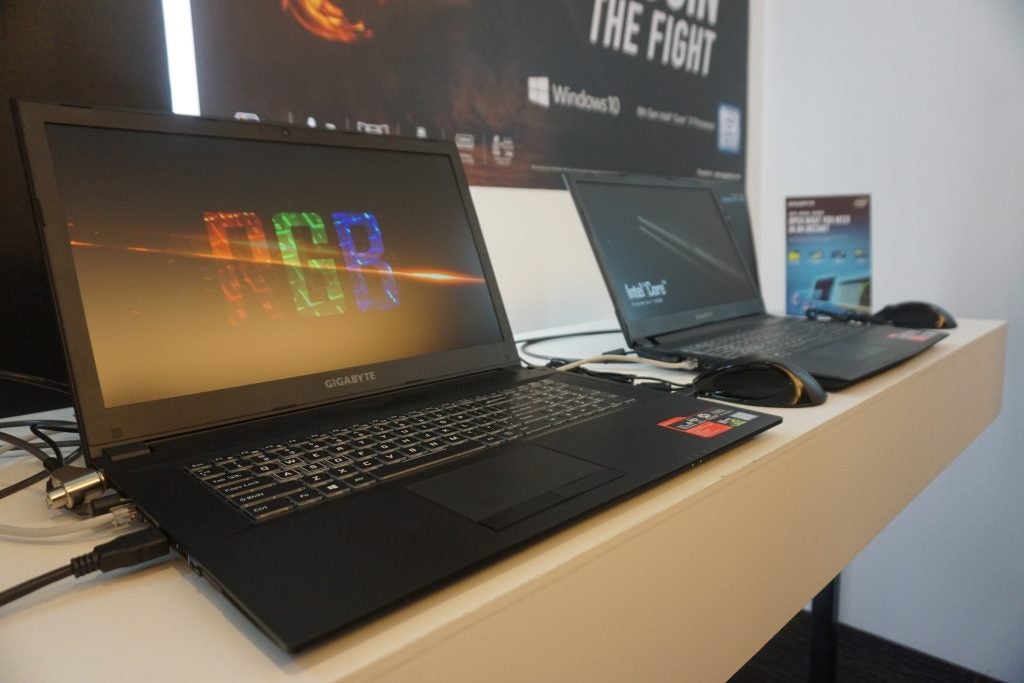 Visually, the Sabres look fairly similar to past Gigabyte laptops. The two have a black plastic chassis that, outside of a contoured line and Gigabyte logo on their back, are pleasingly free of any design flourishes. Some flashy gamers may bemoan the lack of any RGB lighting on the laptops’ main body, but I remain a big fan of Gigabyte’s understated approach. Seriously, I don’t need a flashing dragon logo advertising to the world the fact I’m carrying an expensive bit of kit.

My only quibble with the design is that, like other Gigabyte laptops I’ve tested, the plastic doesn’t feel terribly robust. Build quality generally feels fine, but the hinge and main body both offer a minor flex when met with moderate pressure. I would trust either Sabre to survive a semi-serious fall or crash unscathed. 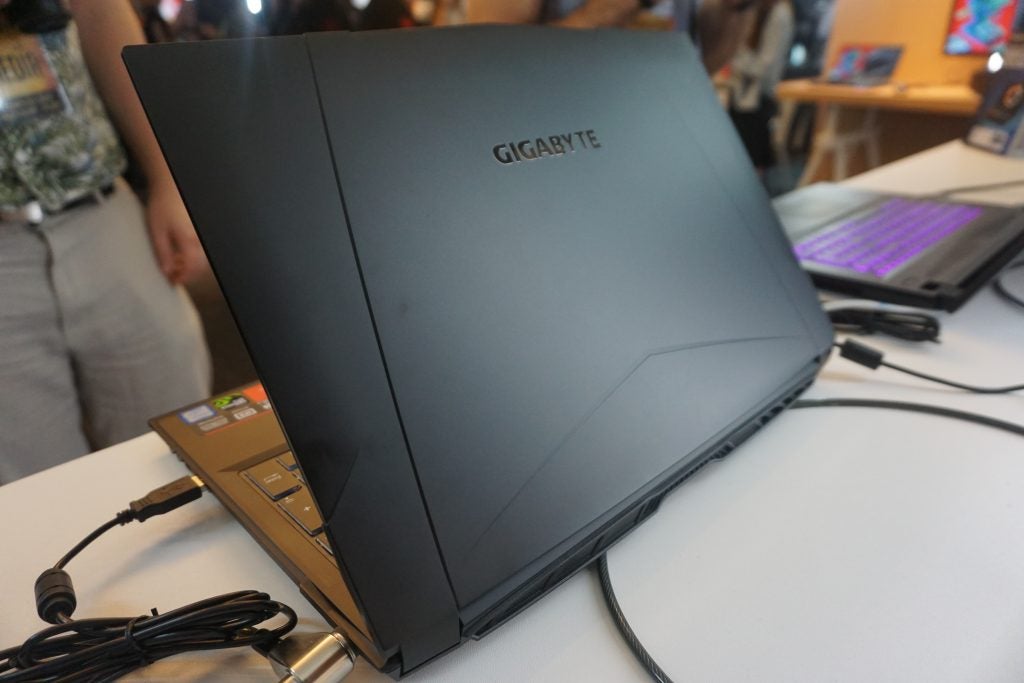 Fortunately, outside of this the laptops tick nearly all the right connectivity and design boxes expected of a gaming laptop. The USB 3.1, HDMI and mDP ports lining their sides will meet most gamers’ needs, and mean its quick and easy to connect them to a gaming keyboard, mouse and display without investing in a USB hub.

Both laptops’ keyboards are also pretty impressive when compared to competing mid-range gaming notebooks. The switches feel pretty similar to the ones found on Gigabyte’s more premium Aorus X5, which is no bad thing. Though they aren’t mechanical and don’t have the amazing Maglev tech seen on Dell’s XPS line, the keys have a solid 2mm travel and pleasing click action. The keys are also nicely spaced out and in general feel more than good enough to game on.

Like the X5, the keyboard also features customisable RGB lighting, which will be useful for players that like to map games’ control schemes. The only downside is that, unlike more expensive gaming notebooks, neither laptop has programmable macro keys. 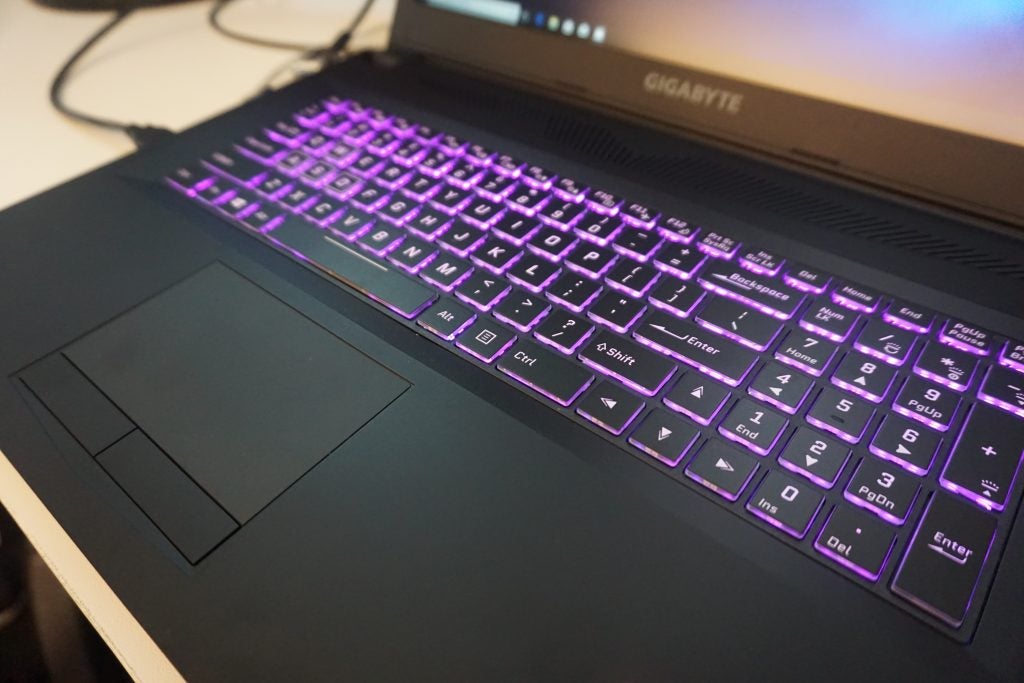 Under the hood, things get a little more interesting. The Sabre 15 and Sabre 17 will both come with Intel i7+ CPUs. These CPUs don’t offer superior clock speeds to their non-plus rivals; instead they add support for Intel’s Optane storage technology.

Optane was unveiled by Intel at CES. It aims to boost HDD data speeds and according to Intel will let them offer SSD-like responsiveness. Specifically, Intel claims the tech will offer 3.9 times faster data transfer speeds on desktop and 4.7 times faster speeds on notebooks.

If true, this will let users get the speed of SSDs and affordable storage capacity of HDDs in one neat package.

It’s because of this that Gigabyte has loaded every version of the Sabre with a 1TB HDD and capped the SSD size to 256GB – though there are apparently spare M.2 and SSD slots under the hood if you want to manually add more SSD storage. 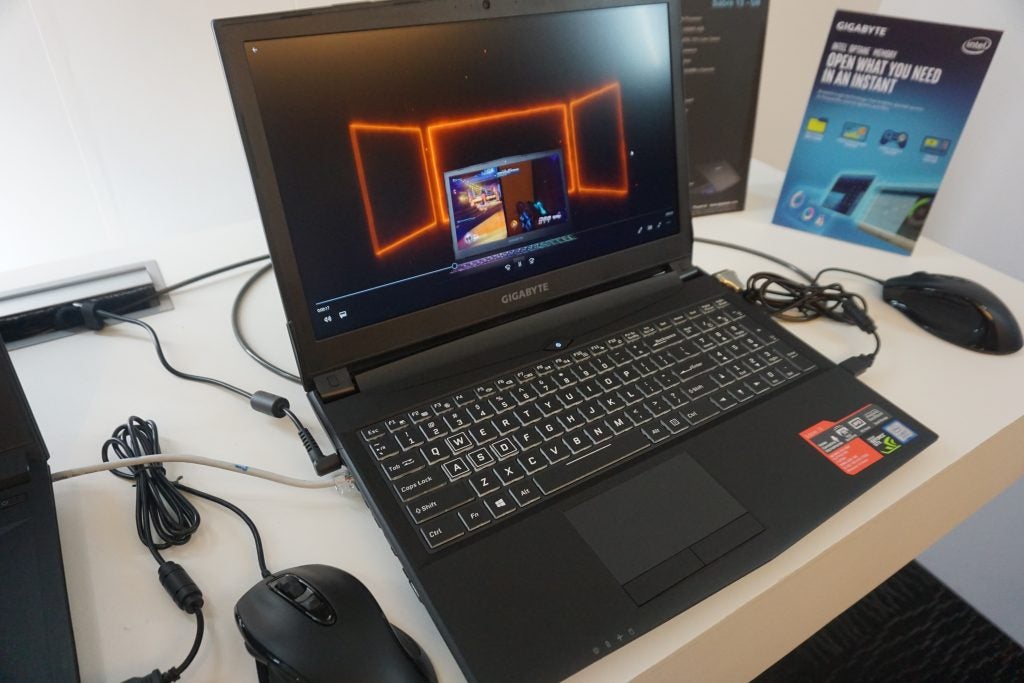 I didn’t get a chance to run any benchmarks or check how games ran booting from the HDD, but if the tech works as well as Intel claims, this could make the Sabre line fantastic value for money.

The two laptops screens are also pretty darned impressive. Both the 17.3-inch and 15.6-inch versions run using FHD, IPS panels that run at 120Hz. The increased refresh rate is a key feature missing from many other equivalently specced laptops and mean both should be noticeably more responsive while gaming.

The only downside is that in the UK, buyers will only be able to pick between GTX 1050 and GTX 1050 Ti GPUs. This will limit how effectively they can play demanding triple-A games with their graphics maxed, even in 1080p. This will be especially true if you opt for the lower 8GB RAM option.

Despite having a wealth of customisation options internationally, Gigabyte only plans to sell four versions of the Sabre in the UK. You can see the exact configuration and price for each below.

Neither Sabre laptop has a UK release date, though a spokesperson said they expect the 15 and 17 to go on sale “in the near future”.

The Sabre 15 and Sabre 17 don’t have the killer specs of competing, more expensive gaming notebooks, but they have a lot of potential. If Intel’s Optane storage tech works as hoped, they could be fantastic value for money.