The GTX 1070 is exceptionally quick. Its 1080p averages of 77fps and 112fps in Tomb Raider and Middle-earth: Shadow of Mordor are smoothly playable, and that latter score is a few frames quicker than the Aorus.

The Gigabyte didn’t struggle at 2560 x 1440, either. It ran Tomb Raider at 58fps and Mordor at 92fps, with the Middle-earth: Shadow of Mordor result matching the Aorus. It handled GTA V’s Very High settings at a solid 60fps, too.

The GTX 1070 even ran some games at 3840 x 2160. Its 51fps score in Middle-earth: Shadow of Mordor is one frame faster than the Aorus, which indicates that it will play many games at this demanding pixel count.

However, the P57X has limits – the toughest titles won’t run smoothly at 4K. The GTA V 4K benchmark delivered a solid 45fps average, but its sub-30fps minimum means that the game will stutter occasionally. Tomb Raider struggled, with a reasonable 36fps average hindered by a 15fps minimum. Turning down graphics settings will improve those minimums, but that temporary fix will have less impact as games improve. 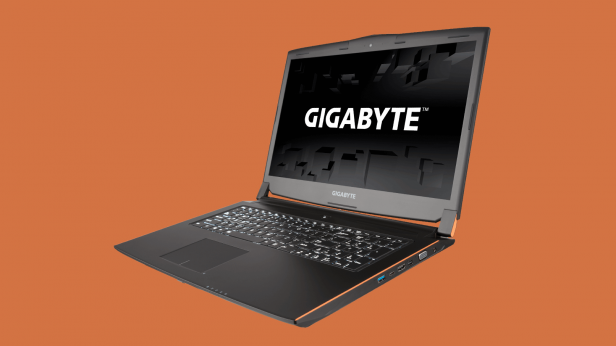 This issue would have been present on the Aorus X7 v6 if it had a 4K screen – and it will occur on any other GTX 1070 notebook. To get around it you’ll need a GTX 1080, and that means spending around £2500 on a machine such as the Scan 3XS LG17 Carbon Extreme.

That will translate to a couple of frames, but not enough to transform any gaming experience.

There isn’t much to choose between the P57X and the Aorus, with both performing well and gaining a small overclocked boost. The GTX 1070 will play anything at sub-4K resolutions and on VR headsets, but it won’t handle 3840 x 2160 consistently.

There isn’t much to choose in the CPU department – no surprise, considering the similarities between Skylake and Kaby Lake. The P57X’s Geekbench scores of 4044 and 14,562 are within 23 points of the Aorus. Expect both machines to handle most CPU-intensive applications – only the toughest work tools will prove challenging.

The P57X has Quiet, Normal and Performance fan modes alongside its levels of GPU overclocking, with the Gaming option chosen by default. At default settings the P57X is cool and quiet; during games there’s a modest whirr that increased only a little when I ran the CPU at 100%.

That noise dropped in the Normal fan mode, and became near-silent with the Quiet option selected. That’s good for working or watching movies, but poor for gaming – it throttles CPU and GPU clock speeds to halve frame rates.

There’s no real performance difference between the Normal and Performance modes, and temperatures remained decent: the CPU and GPU settled at 85oC and 76oC in Performance mode, with those increasing by a couple of degrees in normal mode.

The P57X is cooler and quieter than the Aorus, and only a little heat made its way to the keyboard and the base – another area where the slimmer Aorus faltered, with a base panel that was too hot to touch. 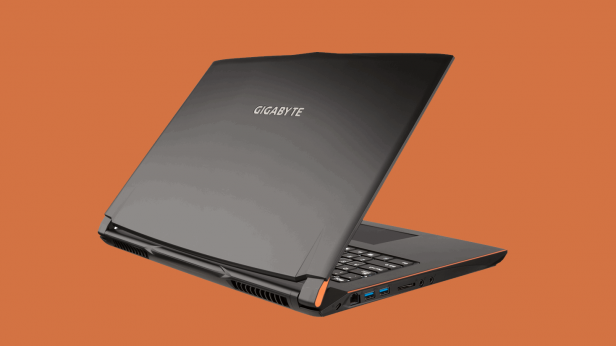 The 4K IPS panel delivers fantastic sharpness and a matte coating that bodes well for gaming and movies, but it doesn’t have any syncing – something the Aorus offered with 120Hz Nvidia G-Sync. That means the Aorus will deliver smoother gameplay.

The Gigabyte’s panel proved bright and breezy in benchmarks, but it isn’t without problems.

Its peak brightness level of 428 nits is huge, and too bright for anyone to use sensibly, and that means the black level of 0.65 nits is also high. The contrast ratio of 629:1 is mediocre, and similar to the Aorus. That creates a lack of depth across the entire spectrum, and underwhelming black tones – some shades might look more grey.

That’s not the only area where the two panels are similar. The P57X’s colour temperature of 7218K isn’t far from the Aorus, and that’s a tad cool. The average Delta E (where a smaller number means better accuracy) of 3.79 is middling, too.

At its default settings the P57X is bright, but it lacks depth. Thankfully, there are ways to rectify this. The Native Colour mode improves the Delta E to 0.52, while leaving every other result the same. I prefer dialling back the brightness to around 150 nits, which improved the contrast to 833:1 and the Delta E to 0.57.

The P57X’s sRGB gamut coverage of 100% is flawless, and better than the 81% of the Aorus – and its uniformity is better, too, with a brightness swing of around 13%, which isn’t noticable.

Complaints are minor. The backlight leak in the bottom left won’t be obvious unless that area of the panel is dark, and the viewing angles are fine but not spectacular.

For the most part, the P57X’s panel is better than the Aorus’ screen: it has a higher resolution and, once that brightness is toned down, its colours and contrast are superior. I’d only opt for the Aorus if  G-Sync is a key factor.

The 2W speakers are fine, too, with a clear mid-range and a top-end that just avoids sounding tinny. The speakers offer ample volume and no distortion, so they’re good for both gaming and movies.

The Aorus goes one better, however. Its inclusion of a subwoofer results in more prominent bass, and the dedicated audio software can make fine adjustments.

Used as our main laptop for the review period
Tested for at least a week
Used consistent benchmarks for fair comparisons with other laptops
Reviewed using respected industry benchmarks and real world use
Previous
Gigabyte P57X v7-CF1 Review Next
Keyboard, Trackpad, Battery and Verdict Review