It’s easy to think of gaming laptops as ostentatious machines that prize looks above everything else – but this isn’t the case here. The Gigabyte P57X is far more subtle than many of its gaming rivals.

However, its understated looks hide a potent specification – one that will see you having to fork out a whopping £2199.

At the heart of this machine is Nvidia’s GTX 1070 GPU. It’s one of the firm’s new Pascal-powered parts, which means huge efficiency and performance. The mobile GTX 1070 has 2048 stream processors and a 1442MHz core clock, with a 1645MHz Boost peak and 8GB of memory. That’s more stream processors than the desktop card and a slightly lower speed, which means this mobile variant will achieve parity with the full-fat version.

That’s not all. Gigabyte has enhanced the GTX 1070 with five tiers of overclocking, with the top option improving the speed by around 10%. There are granular fan controls, too. 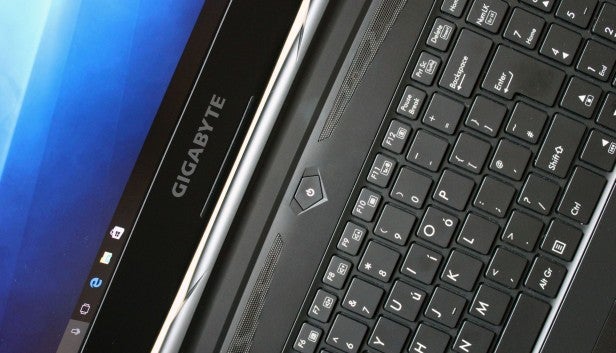 The Gigabyte’s nearest competitor is the Aorus X7 V6, which is Gigabyte’s high-end gaming brand. That machine also had a GTX 1070 core, yet avoided 4K, instead opting for a sensible 2560 x 1440 panel.

The GPU is paired with an Intel Core i7-7700HQ processor. It’s a new Kaby Lake chip, which means minor improvements in several categories versus sixth-gen kit. It has four Hyper-Threaded cores clocked to 2.8GHz and a Turbo peak of 3.8GHz, which means it will compete well with the Aorus – that machine had an i7-6820HK that ran at an overclocked 4GHz. The P57X offers no CPU overclocking.

The P57X here is of the priciest specification, which means a 256GB Samsung SM961 SSD and 32GB of DDR4 memory – four times as much as the Aorus. That’s good on paper, although that much memory has a negligible impact on games performance and will really only help if you start delving into ultra-high-resolution video editing and 3D work.

If this specification proves too costly, the Gigabyte is available as the tweaked P57X v7-CF2, which has a 1080p display and 16GB of memory for £1899.

Design-wise, this machine looks more home or business laptop than a top-tier gaming portable. The P57X is made from matte finished metal, with a modest speaker grille, small logos and white lighting – no sign of RGB here. In fact, the only colour you’ll see is in the form of some orange strips down the sides of the keyboard, alongside small accents on the hinges.

Build quality is reasonable, too. There’s slight give in the wrist-rest and base, and the screen is the only weak point; its slightly flexible metal is not a terminal problem. It’s just as sturdy as the Aorus, and the 3kg Gigabyte does this while being 200g lighter than its stablemate. 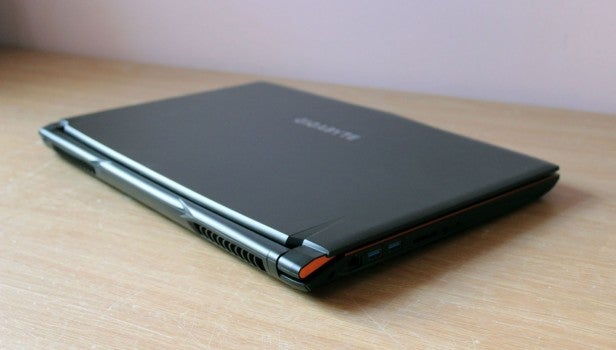 The base panel pops away once a dozen screws have been removed, and it’s easy to access the memory and storage. It’s simpler to get inside this machine than the Aorus. That machine had two spare memory slots and a vacant M.2 connector; the P57X has no upgrade space.

The P57X does have a swappable bay that can be used for an extra hard disk or an optical drive – in this sample it contains a DVD writer. It’s also fully kitted out with ports, including USB 3.1 and HDMI 2.0.