What is the Gigabyte P55W?

Gigabyte may be best known for desktop components such as graphics cards and motherboards, but the Taiwanese firm has a strong focus on mobile computing as well, most particularly with gaming laptops.

With a 15.6-inch 1080p IPS display, Core i7 5700HQ processor and GeForce GTX 970M, the P55W fits into the middle of a range that includes 17-inch and 14-inch models. Configurations include Nvidia’s GeForce GTX 965M, a mid-range mobile graphics processor, and models that have a more high-end GeForce GTX 980M.

The configuration sent to me had a quoted price of £1,100 including VAT. While hardly pocket change, it isn’t a bad price for a gaming laptop that offers good performance. 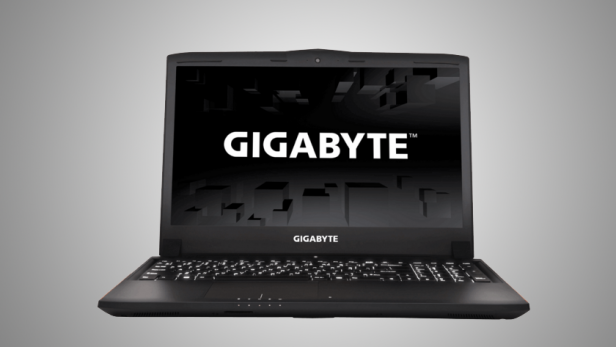 When buying a gaming laptop from a firm such as Alienware, much of the premium you pay can be apportioned to the great-looking design, with items such as custom LEDs that really show off the machine. At first glance of the Gigabyte P55W, you’ll see none of these flashy additions.

Although it isn’t the most exciting-looking machine, it’s still reasonably stylish. The chassis and lid are made of a smooth black plastic, with red stripes visible on each side. Subtle curves and angles can be seen all round the chassis, and at the rear of the machine there’s a slight gradation. The lip extending over the side of the lid is similarly angled, and completing a design that works rather well.

While it’s unrealistic to expect a gaming laptop to be as thin as an Ultrabook, the P55W isn’t particularly heavy or bulky, weighing just 2.7kg. 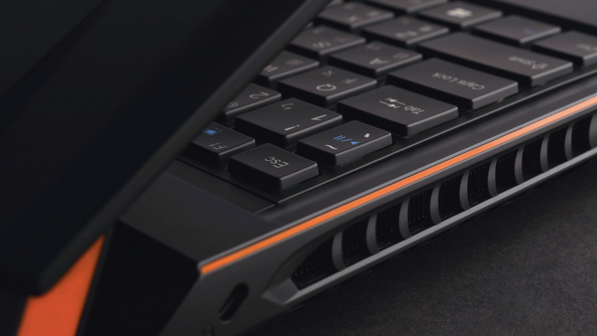 There’s a fan exhaust port on the left-hand side, with a Kensington lock sitting next to it. Five status LEDs can be found below the rather generic trackpad. There’s a power button right in the middle of the rear section, positioned just behind the chiclet-style keyboard, and a fairly generous offering of four USB 3 ports. HDMI and VGA video outputs are present too, plus there’s a built-in Ethernet port, DVD writer and 3.5mm audio in and out.

Hiding on the underside of the P55W is an SD card slot. So well hidden, in fact, I almost missed it. And just below the trackpad are some small white status indicator LEDs, showing various aspects of the system such as Bluetooth, disk access and battery.

At the heart of the Gigabyte P55W is a quad-core Intel Core i7-5700HQ processor, with a standard clock speed of 2.7GHz. This jumps up to a rather tasty 3.5GHz in Turbo mode, however, which is fast enough to deliver superb gaming performance.

And with 3GB of GDDR5 video memory, a GeForce GTX 970M is towards the high-end of gaming graphics cards, second only to the more powerful GTX 980M, so along with the included 8GB of DDR3 memory, this a good specification for a gaming laptop.

Unlike some gaming systems, Gigabyte has avoided an expensive high-DPI display, instead opting for a more straightforward 1080p screen. For gaming, laptop components seldom offer the performance required for 4K or similarly high resolutions, so it’s a perfectly reasonable design choice. 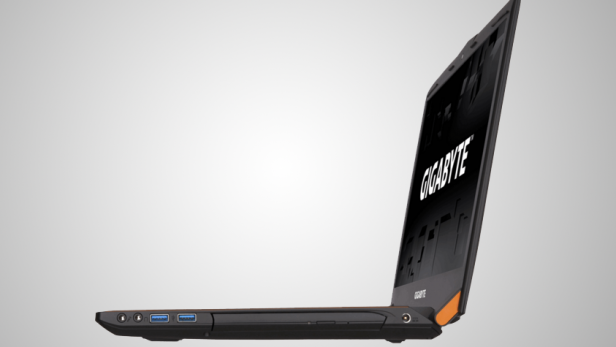 The decision to include an IPS panel also means that viewing angles are better than those you’ll find on a more traditional display based on older TN technology. Pictures look great in games, although it isn’t the brightest display I’ve come across.

As with most laptops, there are a number of storage configurations on offer. This sample unit included a 128GB LiteOn SSD and a 1TB hard disk, which is just about fine for pure gaming use, as long as all games are kept on the hard disk. You can upgrade to a 512GB SSD and 2TB hard disk if desired.

Note that the 8GB of memory occupies only one of the two SODIMM slots, so you can boost this to 16GB by purchasing a second 8GB stick. However, there’s no easy way to slot it in; you’ll need to undo the screws at the bottom of the device and remove the lower part of the chassis to get it in.

The GTX 970M is no slouch in games, and with a 3.5GHz processor behind it, I expected some great mobile gaming performance from the P55W.

And that’s exactly what it delivered. In Tomb Raider, at Ultimate detail settings at 1080p resolution, the P55W managed an average frame rate of 58fps and a minimum frame rate that never went below 30fps, ensuring smooth gameplay at all times. This is a great result that even some mid-range desktops struggle to deliver at this detail setting.

Likewise, in BioShock Infinite – with all the detail settings set to Maximum at 1080p – I saw an average frame rate of 69fps, which is another good result.

Grand Theft Auto V managed a perfectly playable 60fps average with Medium detail settings, using 2.5GB of the graphics card’s 3GB of memory. Advanced graphics settings such as long shadows and extended distance scaling were left off, but the game still looked superb even without this extra detail. 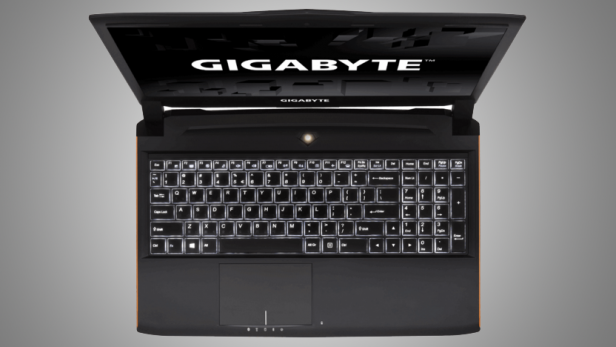 The exhaust fan on the left-hand side works notably hard during gaming sessions, spitting out plenty of warm air. The noise is noticeable, but perfectly acceptable when compared with many gaming notebooks – it’s a notable hum rather than a loud whoosh. The P55W definitely isn’t anywhere close to being the loudest gaming laptop I’ve tested. When idle, the P55W is effectively silent, and upon exiting a game it returns to silence almost immediately.

The fan sometimes spins slightly when playing 1080p H.264 video, but thankfully it’s a lot quieter than when gaming – and it doesn’t always kick in.

When watching 1080p video, the battery lasted for 3hrs 45mins – which will see the P55W make it through the entire length of movies. While this isn’t the best result I’ve seen, when you consider that the majority of gaming laptops become useless within an hour disconnected from a power supply, this isn’t a terrible result. 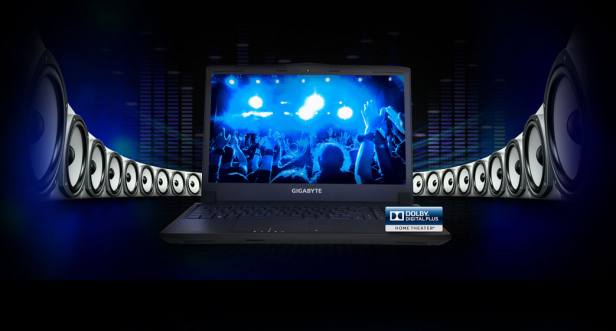 Should I buy the Gigabyte P55W?

The Gigabyte P55W might not look like a killer gaming laptop on the outside, but on the inside it has all the right ingredients to deliver some great performance. It will play games with ease, it offers reasonable battery life – and size-wise it’s a more practical proposition than more monstrous gaming units, like the MSI GT72S Dragon Edition. While the design may be a bit stark and not terribly exciting,the P55W is far from unattractive.

Add to this a decent screen and keyboard, and it’s difficult to find a major flaw in the Gigabyte P55W. Given that it’s relatively good value for money too, this gaming laptop is definitely one that should make your shortlist.

The Gigabyte P55W is solid gaming laptop that offers superb performance for an attractive price.