What is the Gigabyte P37X?

The P37X is being marketed as one of Gigabyte’s thinnest and most powerful gaming notebooks to date, and features some top-end specs to back up this claim. It’s loaded with 8GB of VRAM, an Nvidia GeForce GTX 980M GPU and an Intel Core i7-4727HQ processor.

The Gigabyte P37X generally lives up to its specifications and offers blistering gaming performance, but its perks come with a hefty £1999 price tag.

The Gigabyte P37X has a pleasingly understated design. Its completely functional black frame is, thankfully, free of the gimmicky red plastic trimming and needless LED lights seen on many competing Asus and Alienware laptops.

The P37X is still far from travel friendly, though, with its 2.7kg weight making it too heavy to comfortably lug around in a satchel for prolonged periods.

Though, if you’re just planning to carry it to a friend’s LAN party every now and then, or take it on holiday with you, it’s one of the better gaming laptop options. 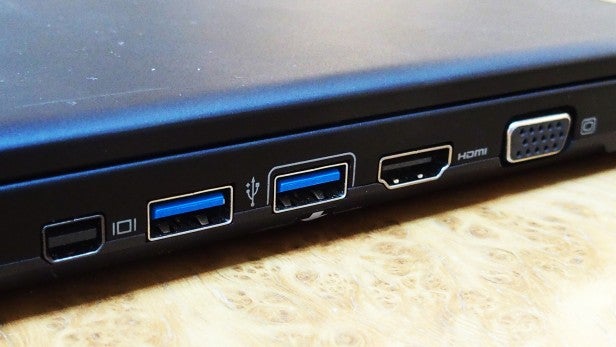 Gigabyte’s managed to load the P37X with an impressive array of ports that will meet most gamers’ needs. Along its right and left sides the P37X houses two USB 3.0 ports, two USB 2.0 ports, an HDMI input, D-sub, RJ45, mic in, headphones out, SD card slot, DC power, and a Mini DisplayPort.

The P37X has also been designed to be an outright beast when it comes to storage. The model I reviewed came with a 1TB hard disk and an optical drive in place. Those who want more can swap out the optical drive for a 2.5-inch HDD/SDD.

If you pop off the P37X’s back there’s space inside for two mSATA drives to further bolster its storage. The configuration means, if you wanted to, you could have up to 5TB of space on the P37X – which is pretty damned impressive.

I’m a little less enamoured about the Gigabyte P37X’s keyboard and trackpad. The keyboard on paper looks great. It’s backlit, has a full numberpad and six customisable macro keys along its left side.

These should make it ideal for people who play games such as League of Legends, World of Warcraft or Call of Duty competitively online. But the keys are too squished together and the entire keyboard feels too small.

Trying to play a bit of old school Diablo III, I found myself regularly hitting the wrong key. Eventually I was so fed up with the keyboard I ended up plugging in an Xbox One controller to finish the level.

Yes, I was so annoyed I actually forwent the precision and customisability of a gaming mouse and physical keyboard – it was that frustrating. 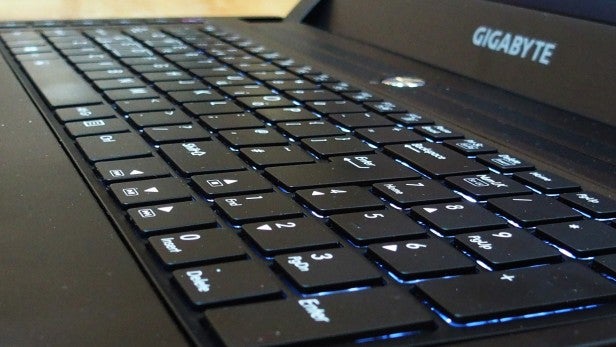 With time I got more used to the keyboard’s size. But with it taking up less than half the space it could have on the Gigabyte’s surface, it feels like a serious design flaw that could easily have been avoided.

The issue is especially annoying when the keyboards on cheaper £1,000 gaming laptops, such as the MSI GE62, offer a noticeably nicer gaming experience.

The trackpad suffers from the same issue and feels too small and fiddly to use. This is slightly more forgivable considering most people will plug in a gaming mouse, but it’s still a slight annoyance.

Some gaming snobs may turn their nose up at the specifications, feeling in this price point it should have a 4K display, but in general I was seriously impressed with it. Icons are more than sharp enough and the P37X has the best viewing angles I’ve seen on a gaming laptop.

Colour balance levels are also great and the screen is nicely unsaturated. Whites appear clean, and blacks, while not the deepest I’ve seen, are good enough. I also didn’t notice any significant backlight bleeding during my two-plus weeks with the Gigabyte P37X. All in all it’s more than good enough for gaming.

The P37X’s Display Port also lets you connect the laptop to a 4K monitor, so those who want to can get hi-res gaming. I didn’t have a 4K monitor to hand while reviewing the P37X, so sadly didn’t get test how it handled 4K gaming, but I’ll be sure to do so the moment I get the chance.

Used as our main laptop for the review period
Tested for at least a week
Used consistent benchmarks for fair comparisons with other laptops
Reviewed using respected industry benchmarks and real world use
Next
Performance, Battery and Conclusion Review