The 4K screen’s biggest advantage is its sheer pixel density. The 3,840 x 2,160 resolution and 15.6in screen size mean the P35X v6 churns out a density level of 282ppi, which is just outstanding. It’s better than the 15.6-inch Retina MacBook Pro, for instance, and not far behind current-generation smartphones. It’s obviously miles better than the XMG P507, with its 141ppi.

The huge density means games will look sharper on the Gigabyte, and it also bodes well for watching 4K content and editing photos. It does mean that you’ll have to use the Windows scaling settings to make text and icons legible, but that’s fine – those settings are far better then they used to be. 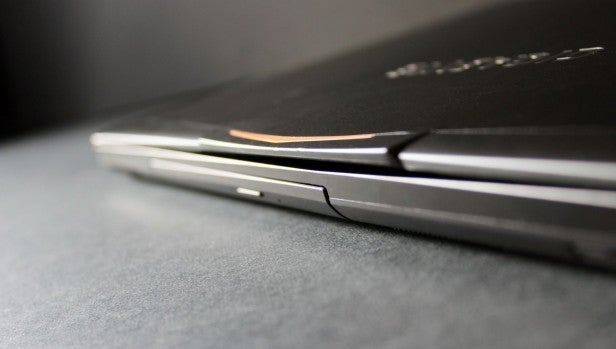 Gigabyte’s screen is better than the XMG in most benchmarks, too. Its contrast ratio of 1,286:1 and black level of 0.22 are higher and deeper than the P507’s figures, and both of those will make a huge difference in games: the better contrast ratio means colours will be more vivid across the entire range, and the deeper black level will create inkier dark shades, which helps in moody-looking titles.

Colours are largely better, too, with both accuracy and colour coverage better on Gigabyte’s chosen panel.

The P35X v6’s colour temperature of 7,414K is a little chillier than the XMG, but not enough to prove distracting during gameplay.

The Gigabyte’s only real issue is its screen uniformity. The top row of the panel gains about 10% more brightness when compared to the middle of the screen, while the bottom row of the screen sees a 13% drop in brightness. That’s a bigger swing than most laptops, and around twice as worse as the XMG.

The change in brightness levels is noticeable on lighter screens, such as Word documents or web pages, which hampers the Gigabyte’s potential for colour-sensitive work. Thankfully, it isn’t as noticeable in games, where scenes generally have more varied colours and fast movement to disguise the panel’s lack of uniformity. 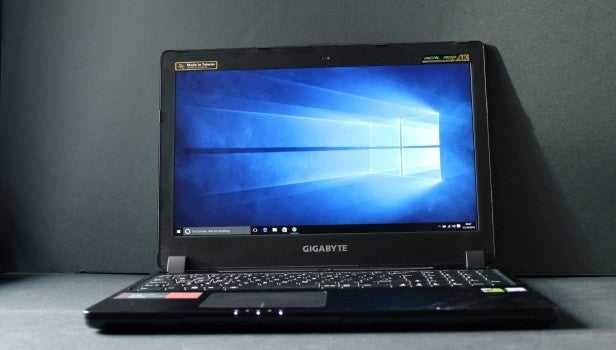 Uniformity aside, though, this is a great screen. The resolution lifts it above the XMG, and it’s better in most benchmarks too – so there’s no question about it being a better option for gaming.

The inclusion of a 4K screen in this £2,100 machine is also impressive when stacked up against the £1,951 XMG – adding a 4K panel to that machine costs £405, and XMG also stipulates that you spend £145 more to upgrade to a better processor before the 4K option is unlocked.

The speakers aren’t as impressive. They’re loud, but that’s their only good quality. The aural range is dominated by high-pitched noises, but they all sound a little muddy – vocals sound as if they’re being sung underwater, or in an echoey room. The emphasis on high-end sounds means treble is underwhelming and a little buried, and there’s no subwoofer inside this machine, so bass is hard to find at all.

I’d always use a headset or a set of cheap external speakers. The lack of mid-range bite also means the P35X falls behind the XMG.

I’m used to seeing chiclet keyboards on slimmer gaming laptops, and the P35X v6 has a reasonable layout: a number pad, full-size Return and Space keys, and highlighted WASD buttons.

Gigabyte’s machine also suffers from the familiar chiclet issues: it’s decent for typing, but not as good for gaming. That’s because it doesn’t have the snap, speed or travel that a traditional laptop keyboard delivers. It’s falls even further behind proper mechanical keyboards. 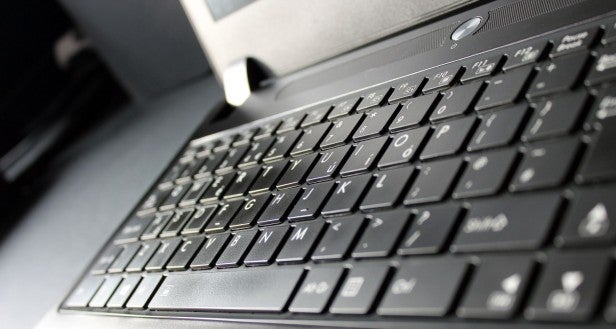 The Gigabyte’s buttons don’t offer much travel, and the base isn’t particularly firm either. It’s acceptable for typing and gaming, but the XMG’s keyboard is a little superior.

The trackpad on the p35X v6 has its issues, too: the buttons barely move at all when they’re clicked, which made me second-guess myself when I was playing games. They’re a long way from the snappy, definite clicks offered by proper gaming mice.