This machine has a 76Wh battery, which instantly lifts it above the XMG P507 – it features only a 60Wh power pack.

The bigger battery and similar specifications means that the Gigabyte handily beat its rival in our standard test. That benchmark sets the screen to 150 nits while running a browsing and video watching and here the Gigabyte lasted for 5hrs 22mins; more than an hour longer than the XMG.

There’s little difference between the two in a proper gaming session, though: the Gigabyte lasted for 1hr 43mins with the screen at full brightness and a game running, which is only about ten minutes more than the XMG. As usual, you won’t be able to go far from a plug if you want to game with either machine. 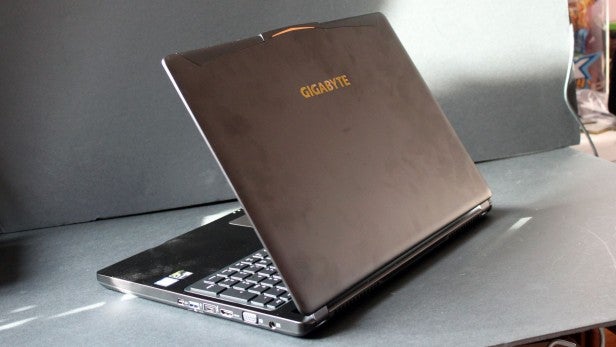 The real test came at 4K – and here the Gigabyte continued to perform well. Its Dirt Rally minimum of 41fps was bolstered with a 49fps average, and it averaged 47fps in Middle-earth: Shadow of Mordor. It even managed Grand Theft Auto V at 56fps.

Those scores see the Gigabyte regularly outpace the XMG. That machine managed 39fps in Middle-earth: Shadow of Mordor and 46fps in GTA V – good, but a step behind the Gigabyte.

Those scores indicate that most modern games will run smoothly at 4K, and they also mean there’s some headroom for tougher games and higher graphics settings. We upped GTA V to its Ultra settings without anti-aliasing and recorded an average of 40fps, and then turned Dirt Rally up and activated anti-aliasing for an average of 31fps.

Not every game will run this smoothly at 4K – there are numerous titles out there that are more demanding than our test games – but our benchmarks bode well. It also means the Gigabyte has enough power to handle VR headsets.

I’ve no qualms about this machine’s application abilities, either. Its Geekbench scores of 3,803 and 13,197 are a little quicker and a little slower respectively than the XMG, perhaps because of that machine’s faster memory. It’s enough oomph to motor through games, work and general computing tasks. 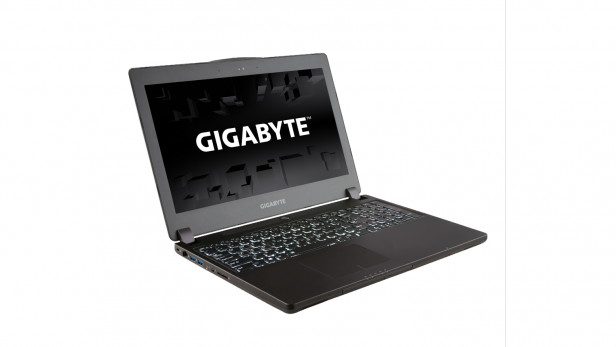 The Gigabyte’s Samsung SSD delivered read and write speeds of 1,846MB/sec and 1,278MB/sec, which are excellent – they mean that this machine will never struggle with game, application or system-loading times.

The P35X v6 falls foul of the usual gaming laptop thermal issues, though. The processor’s top temperature of 98°C is too high, and the GPU peaked at 90°C. Both of those figures are higher than the XMG, and the excessive GPU temperature saw the graphics core throttle to around 1,518MHz, with Pascal unable to run to its full potential.

This isn’t exactly a quiet laptop, with a high-pitched whirr that was louder and more irritating than the XMG, especially when the machine was running more intensive games. The P35X’s base became uncomfortably hot, too – the same issue as the P507 encountered.

Should I Buy the Gigabyte P35X v6?

The P35X v6 is a confounding, inconsistent notebook. There’s plenty to like here, especially when it comes to its performance in the benchmarks: its outpaces the XMG and most other gaming laptops on the market; the processor is fast; and this machine’s battery life also beats the P507.

The Gigabyte’s 4K screen is better than the XMG, too, and I’m particularly impressed that it’s included here when the P35X is barely any pricier than the P507.

On the periphery, though, there are numerous issues. The Gigabyte’s keyboard and speakers are both poor, and the design and build quality is middling.

If you can cope with those issues, perhaps through using external peripherals, this is a great deal: GTX 1070 power and a 4K screen in one of the most chapest (relatively) packages I’ve seen. The P35X v6 isn’t without flaws but it remains a serious contender.

Those who prioritise performance over all else won’t be disappointed by the P35x v6, with the 4K screen an excellent bonus – but it does suffer some niggling issues. Despite these, however, it remains a powerful 4K contender.