Gigabyte doesn’t make the most lavish-looking gaming laptops on the market, and its new P35X v6 continues in this vein, leaving the high-end design behind in favour of the components.

This machine locks and loads one of Nvidia’s fantastic new Pascal-based graphics cores, and it also includes a 4K screen – a welcome inclusion in a 15.6-inch notebook that barely costs more than £2,000.

It’s the successor to the v5, which we reviewed earlier this year, and repeats many of the same problems Trusted found on that machine with physical build issues a particular worry.

Star of the show in the P35X v6 is the GTX 1070, which is one of Nvidia’s best new mobile GPUs. It has the same name as Nvidia’s desktop card, and uses the same Pascal architecture, but the desktop and mobile ranges are still a little different once you drill down into the specifications. 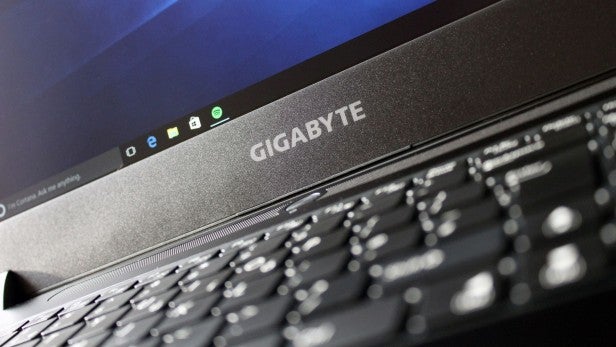 The mobile card has 2,048 stream processors and a 1,645MHz peak speed, which compares well to the 1,920 stream processors and 1,683MHz boost clock of the desktop card – presumably that change has been made to stop temperatures getting quite as high. There’s still 8GB of 8,000MHz GDDR5 memory.

Nvidia’s Pascal generation is the first time I’ve seen mobile GPUs that can match desktop equivalents. The last GTX 1070 machine we saw was the XMG P507, which costs £1,951 – so a little cheaper than the Gigabyte.

The Gigabyte pairs its GTX 1070 with a Core i7-6700HQ processor. It’s the most popular high-end mobile CPU on the market thanks to its four Hyper-Threaded cores and 2.6GHz clock speed. It has enough power to run single-threaded applications, high-end games and demanding multi-tasking, and it’s the same chip as the XMG.

Get beyond those core components and the Gigabyte takes a big leap ahead. The XMG P507 made do with a 1080p screen, but the P35X v6 includes a 4K panel. That means it will be far sharper and more detailed than the XMG’s screen, and the GTX 1070 should run games at this resolution.

The Gigabyte’s screen doesn’t have Nvidia G-Sync, but in my opinion that’s a willing trade-off – games may not look as smooth because frames aren’t synchronised, but you’re getting plenty of extra detail. 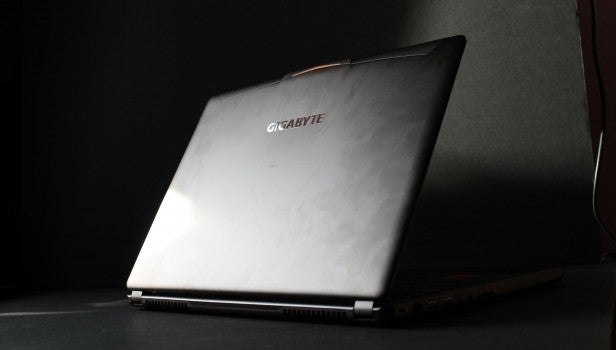 Connectivity is decent: Gigabit Ethernet, dual-band wireless and Bluetooth 4.0 – which is the same as the XMG.

The hardware on the inside of this machine is enticing, but its exterior is more plain. The P35X v6 is made from aluminium and is mostly black – there’s a tiny orange accent on the lid, but that’s it for ornamentation.

There’s a plain Gigabyte logo, round power button and modest speaker grille above the keyboard, and the typing surface has a white backlight with three levels of intensity. Seams are visible between panels of metal throughout, and the screen is bordered with a thick bezel.

It’s hardly a looker, and build quality is similarly middling. There’s obvious movement in the metal used to build the wrist-rest and the screen, although flexing the screen’s rear panel doesn’t disturb the desktop. Even so, I’d carry this laptop in a protective case or sleeve.

The front edge serves up status lights and a Blu-ray drive that sits in a hot-swappable bay – if you like, it can be exchanged for a 2TB hard disk. The Gigabyte’s right- and left-hand edges have USB 3, USB 3.1 and mini-DisplayPort connectors. There’s an SD card slot and, bizarrely, a VGA output. 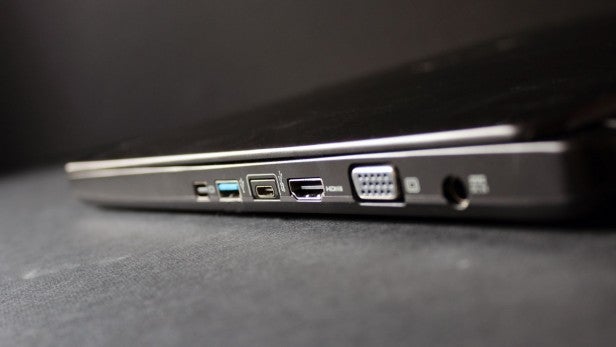 The Gigabyte’s looks and build quality are similar to the understated XMG, but at least the P35X v6 undercuts its rival in the size department. The Gigabyte machine weighs 2.4kg and is an impressive 21mm thick; the chunky XMG weighed 2.94kg and was 32mm across at its thickest point.