Nvidia’s GeForce GTX 980M is a beast. It’s based on the same GM204 core used in the latest range of GeForce desktop cards, and the core boasts 1536 stream processors – more than the chips inside both rival notebooks.

The GTX 980M’s 1038MHz core clock makes this faster than both rivals, and the model used here has a mighty 8GB of GDDR5 memory – more than on offer in either competitor. 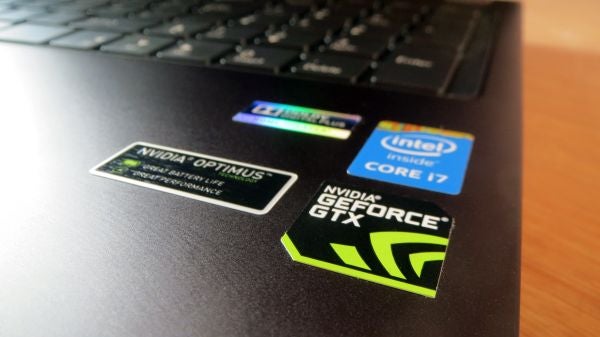 The power of Nvidia’s hardware was demonstrated in our benchmarks. In 3D Mark’s toughest test, Fire Strike, the Gigabyte scored 8260 points: virtually double the 4,326 points scored by the Aorus X3 Plus and the 4392 of the MSI GS60.

That good form continued in Unigine Heaven. Our toughest test runs the benchmark’s Extreme settings at 1080p, and the Gigabyte’s 68fps was more than twice as quick as both rivals.

The Gigabyte’s stellar performance continued in games tests. Its BioShock framerate of 84fps was around thirty frames better both rival machines, and in Battlefield 4 the P35X managed 64fps – almost twice the speed of the competition. In our toughest test, Crysis 3, the Gigabyte averaged 59fps, which was miles ahead of the competition.

The GTX 980M’s extreme power means the Gigabyte is faster than any competitor at 1080p, and its sheer grunt means it’s able to play most games reasonably at the laptop’s native resolution. There’s still a big drop in performance, which limits the appeal of those extra pixels – especially as time goes on and high-end games become more demanding.

The gap was closer in our application benchmarks, as the Gigabyte’s 2.5GHz Core i7-4710HQ processor is similar to the MSI’s chip and is underpowered when compared to the i7-4860HQ inside the Aorus.

The Gigabyte traded blows with its rivals in our storage tests. Its 222GB boot drive is formed by two mSATA SSDs in RAID, and in our sequential read and write tests it scored 819MB/s and 617MB/s. The read speed is less than both competitors, but the Gigabyte’s write pace sits between the slower MSI and quicker Aorus.

ROUND UP: Our Favourite Bluetooth Speakers 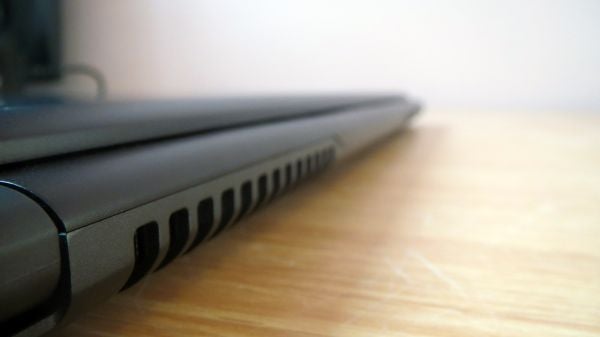 Here’s where the Gigabyte’s slim frame begins to falter. Its fans spun up even when the laptop was running low-intensity tasks or sitting idle and, when gaming, it quickly became louder. It’s enough noise to prove distracting if you’re using the speakers, and flatmates won’t appreciate the constant whirr, either. You’ll only be free from the noise with a headset.

It’s a similar story to the Gigabyte’s rivals, both of which produced a similar racket when playing games. Gigabyte has different fan modes in its software but, no matter which we picked, those fans still made a hefty noise when the system was stress-tested. That – and the P35X’s near-silent operation when the fans aren’t ramped up – is cold comfort.

The Gigabyte’s processor and graphics core reached top temperatures of 92 degrees C and 86 degrees C. They’re high temperatures – the former is especially toasty – and they’re similar to the levels reached by rivals.

Most heat was dissipated through vents at the back of the machine, with a little warming up the centre of the Gigabyte’s underside. It’s warm, but it’s not enough to make using the Gigabyte uncomfortable – more than we could say about the boiling-hot MSI. 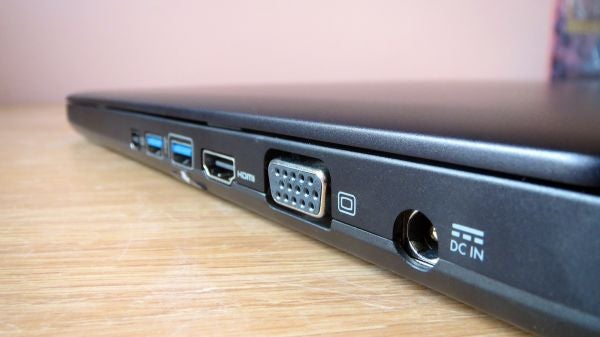 The Gigabyte’s non-removable battery lasted for three hours and 14 minutes in our standard battery benchmark, which lowers the screen to 40% brightness and runs a simulation of web browsing and video-calling. That’s not a great result: less than half an hour better than the MSI, but more than two hours behind the Aorus’ power pack.

With the screen at 100% brightness, High Performance mode engaged and a demanding 3D benchmark looped, the Gigabyte lasted two minutes short of an hour. That’s level with the MSI, but less than a third of the Aorus’ gaming lifespan.

Don’t expect to get much use from this machine away from the mains, and don’t expect much longevity from an emergency charge, either – 30 minutes of charging restored 37% of the battery, which is good for just over an hour in our standard test.

Used as our main laptop for the review period
Tested for at least a week
Used consistent benchmarks for fair comparisons with other laptops
Reviewed using respected industry benchmarks and real world use
Previous
Gigabyte P35X v3 Review Next
Keyboard, Trackpad, Options and Verdict Review