Gaming laptops are in a constant state of one-upmanship: every time a slimmer, lighter or faster notebook blows us away, another machine follows closely with a better specification or more impressive features.

Gigabyte’s P35X v3 is the latest laptop to push the portable boundaries. Its metal frame is one of the slimmest around, but it’s packing Nvidia’s GeForce GTX 980M – Nvidia’s newest and most powerful mobile chipset and plenty more impressive features. If you have the money to spend, it’s definitely worth considering. 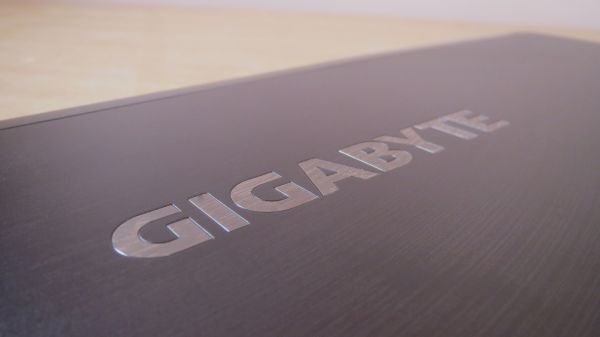 The Gigabyte’s components shout loud, but its exterior is modest. The lid is made from plain metal with a shining Gigabyte logo, and the interior is just as demure – matte, dark and metallic, with little extravagance.

The power button is a neat circular button above the keyboard, and the front edge is decorated with a line of status lights and a button that illuminates a battery indicator. 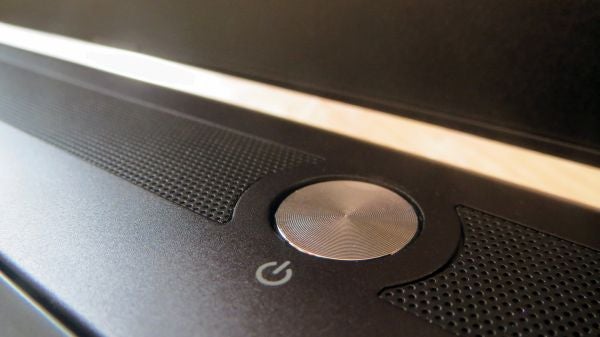 Gigabyte has concentrated on build quality rather than flashy design. It’s a great approach, especially if it results in notebooks like the P35X: the wrist-rest is solid, the base is strong, and the thin screen didn’t flex or distort the desktop. It’s a better bill of health than the creaking Gigabyte Aorus X3 Plus and the MSI GS60 2PE Ghost Pro, which boasted a strong base but weaker screen.

It’s stronger than rivals, but a little heftier. The P35X weighs 2.3kg, which compares badly to the MSI and Aorus – those machines weighed less than 2kg. Gigabyte’s latest laptop is 22mm thick, which is a tad chunkier than the MSI but one millimetre thinner than the Aorus.

That extra padding does allow more versatility. There’s a DVD writer, which is something neither rival offers, and it’s installed in a removable caddy. Slide that out, and it’s possible to install an SSD or 2.5in hard disk in its place.

A small panel on the underside allows access to the memory slots, but they’re both occupied, and the Gigabyte can’t handle more than the 16GB of memory already installed. As far as interior access goes, that’s it.

There are pairs of USB 3 and USB 2 ports, an SD card reader and HDMI, D-SUB and mini-DisplayPort outputs. On the inside there’s dual-band 802.11ac WiFi, Gigabit Ethernet and Bluetooth 4.0 – a standard selection that doesn’t match the Killer-branded Ethernet installed in both alternative machines. 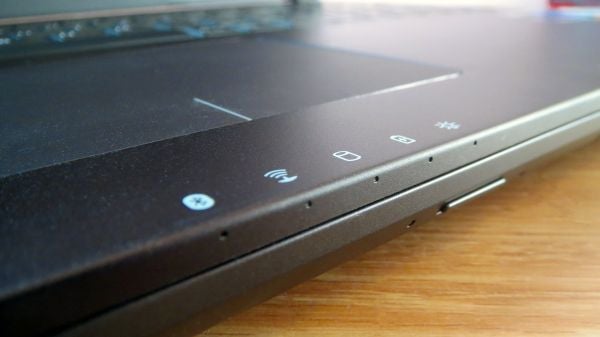 We can see why firms keep deploying such huge resolutions – it does look good on posters, after all – but it has few practical applications. Games run at native resolution will take a big performance hit compared to 1080p, and Windows 8.1’s features need to be upscaled to make them usable – if left untouched, you’ll have to squint. Third-party support for high-resolution displays isn’t there yet, either. Some applications scale smoothly, but others misplace page furniture while some simply stay tiny.

The P35X’s colour temperature of 7363K is too cool, and worse than the 7194K result of the Aorus, and the Gigabyte’s black point of 0.42 nits is the poorest of the three laptops we’ve mentioned here – its black tones aren’t as inky as those on rivals.

The Gigabyte’s 883:1 contrast ratio isn’t as good as the competition, either, and it helped contribute to a lack of definition between darker tones – a problem when so many games rely on dingy, moody scenes. Colours at the top end of the scale aren’t as vibrant, either. Colour accuracy is only middling; the Gigabyte’s average Delta E of 3.66 was beaten by both competitors.

This laptop’s measured brightness of 371 nits is excellent, and it’s the only benchmark where the P35X beats the competition. Both of its rivals have brightness beyond 300 nits. though – when all of these results are ample, the Gigabyte’s best result is almost a moot point.

The Gigabyte has a good screen but, crucially, its key competitors are better.

A sticker on the Gigabyte’s wrist-rest proudly proclaims that Dolby hardware powers the P35X’s pair of 1.5W speakers and single subwoofer. The audio kit is good: the subwoofer pumps up reasonable bass, and the high notes are punchy and full rather than tinny. We’d prefer a tad more bass, but the speakers here are easily the match of the Aorus and MSI hardware.