The new Gigabyte GA-X48-DQ6 has a huge amount in common with the GA-X38T-DQ6 that we reviewed way back in October 2007.


This was our first X38 chipped motherboard and we were impressed by the support for proper CrossFire with 16 lanes of PCI Express for each graphics slot instead of the half-hearted 16 and 4 that you get with the P35 chipset. The other facet of the X38 was its support for Intel’s 45nm Penryn update to Core 2 but of course those features are part of the chipset and don’t reflect on the ability of the motherboard designer.


Gigabyte used the X38 to build an elegant motherboard in the GA-X38T-DQ6 that felt solid and which oozed quality. Most of the features were provided by the chipset although Gigabyte added support for a 1,600MHz front side bus along with 1,600MHz DDR3 memory, where Intel wanted those numbers to top out at 1,333MHz. We made the most of this feature when we reviewed the Core 2 Extreme QX9770 processor which runs on the new 1,600MHz front side bus and the Gigabyte performed admirably. 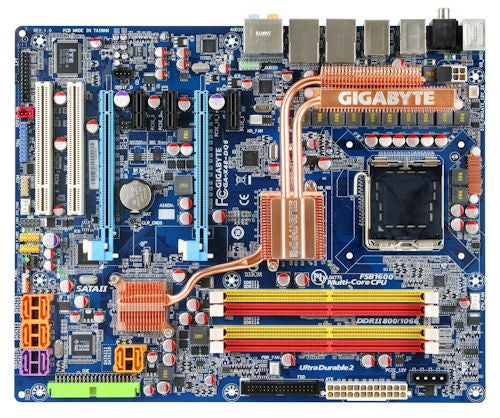 The other aspect of the GA-X38T-DQ6 that caught our attention was the attention to the control of heat. Gigabyte’s DQ6 features high quality capacitors, MOSFETs and chokes which are more efficient than traditional components so they save power and reduce heat output. In addition the passive cooling system on the chipset and power regulation hardware is chunky and substantial yet far less intrusive than the systems used by Asus and MSI and leaves plenty of space for the processor cooler of your choice. Gigabyte even added a heat sink to the back of the board beneath the Southbridge so it could keep the cooler on the topside nice and small so it didn’t get in the way of your graphics cards. We were less impressed by the Crazy Cool heat spreader on the reverse side of the processor socket which works just fine if you employ a standard Intel cooler. We prefer to use a large Zalman cooler which has a back plate that fits under the motherboard so the Crazy Cool was consigned to the box. Gigabyte supplies alternative fixings so you can remove the Crazy Cool so this isn’t by any means a major task, although it is a bit fiddly.


That’s the GA-X38T-DQ6 revisited and almost every word applies to the GA-X48-DQ6. As the name suggests the new model uses the X48 chipset and retains the DQ6 features, and the result is that the two motherboards look almost identical. The X38 is PCB version 1.0 while the X48 is version 1.1 and you have to look carefully to spot that the four-pin Molex power connector next to the main 24-pin block on the X38 has vanished on the X48 model. The retention device for the two graphics cards has also been changed.

Less obviously the X48 uses DDR2 memory instead of the DDR3 support we saw on the X38T-DQ6. On the face of it this is a backwards step as the X38 model supports up to 8GB of DDR3-1600 memory while the X46-DQ6 supports up to 8GB of DDR2-1200. Although 1,200MHz DDR2 sounds significantly slower than 1,600MHz DDR3 there is no apparent impact on performance if you stick with the older technology and it saves you a stack of cash. 2GB of DDR3 costs £140 for good stuff or £200 for excellent stuff yet you can buy 2GB of decent DDR2 for about £80. 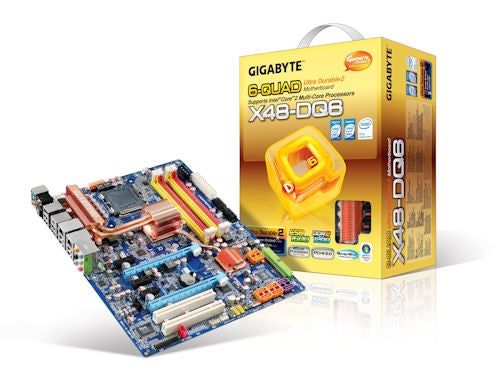 The X38T-DQ6 had happily run the Core 2 Extreme QX9770 on an F5 BIOS and continued to do so when we updated to the latest BIOS F6a for this review. The X48-DQ6 was delivered with BIOS F6a already installed and as this motherboard wasn’t listed on the Gigabyte support website at the time of the review process there was no option of an update. No doubt a BIOS release will fix this glitch in the X48-DQ6 and while it’s hard to get upset when a motherboard won’t run a processor that is only available to reviewers it does make you wonder. For goodness sake the X38T can do it so why can’t the X48?


Both motherboards offered the same extensive overclocking options including the ability to increase the clock multiplier in an increment of half a step and they both overclocked the QX9650 from 3.00GHz to 3.66GHz.


If you already own an X38 motherboard or specifically own the Gigabyte GA-X38T-DQ6 then you won’t be in the market for the GA-X48-DQ6. On the other hand if you’re upgrading from a P35 board or older then we’d strongly advise you to go for the X48 instead of the X38T. Cheaper DDR2 memory is a distinct bonus and it gives you the option of buying 4GB of RAM or more so you can run 64-bit Vista. Buying 4GB of DDR3 will cost you a fortune so the DDR3 option realistically limits you to a 32-bit Operating System.


Let’s gloss over the fact that the X48-DQ6 wouldn’t start with a Core 2 Extreme QX9770 installed. In essence it’s a DDR2 version of the X38T-DQ6 with the same admirable build quality and that makes it a highly desirable motherboard.


Unless otherwise stated the test system is:


Unless otherwise stated the test system is: