From the graphics viewpoint Intel took a step backwards from the 975X chipset when it launched the P35. The 975X only delivered 16 lanes of PCI-E, which was great if you had a single graphics card but less wonderful if you fancied using CrossFire as each graphics slot only got eight lanes of PCI-E. Truth be told we never saw any impact from this ‘limitation’ but it didn’t sound ideal.


The P35 chipset upped the ante and supported 20 lanes of PCI-E but the mains graphics slot got 16 lanes at all times and the other four lanes were used to connect any other PCI Express devices. If your P35 motherboard has dual graphics slots and you plug in a second graphics card it sucks up those four lanes which disables any PCI-E x1 devices that you may be using and also the restricts the bandwidth available to the second graphics card. 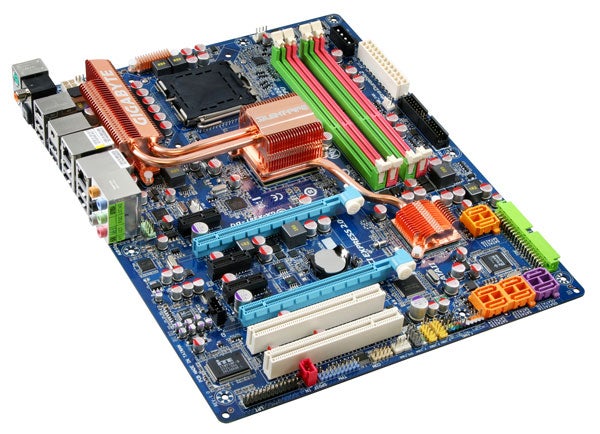 If you run Radeon X1950 XT graphics cards in CrossFire you’d do better to stick with your old 975X motherboard instead of changing to a new P35 but the time for an upgrade may have arrived as we’ve got our hands on the new X38 chipset from Intel.


Gigabyte has come up with two models of X38 that have a great deal in common and which both sell for the same price. The GA-X38-DQ6 supports up to 8GB of DDR2-1066 in four modules, while this full-fat GA-X38T-DQ6 supports DDR3-1600. There’s a gotcha here as the options for memory multipliers will limit you to a maximum speed of 1,333MHz with the current crop of processors unless you are overclocking, but there’s a good reason for this apparent oddity as the GA-X38T-DQ6 supports future 45nm and 1,600MHz FSB processors.


The layout of the board looks very similar to a high-end P35 design and the area around the CPU looks especially tidy as Gigabyte has specified MOSFETs, Ferrite Cored Chokes and solid aluminium capacitors that are efficient and small in size. We swiped this photo from Bit-Tech’s preview of the X38T that illustrates the point.

We nicked the photo because the MOSFETs are covered by part of the extensive passive cooling system which starts at the Southbridge, on to the Northbridge and then to the power regulation hardware and we didn’t fancy removing the tinware. All three passive coolers are bigger than you might expect but the reports are that the X38/ICH9R has a power consumption of 35W when you’re running CrossFire so we’re talking about a serious amount of power and heat for a mere chipset. Intel has fitted the X38 with a proper heat spreader and Gigabyte has installed a heatsink on the back of the board that sprawls from the CPU socket to the Northbridge. 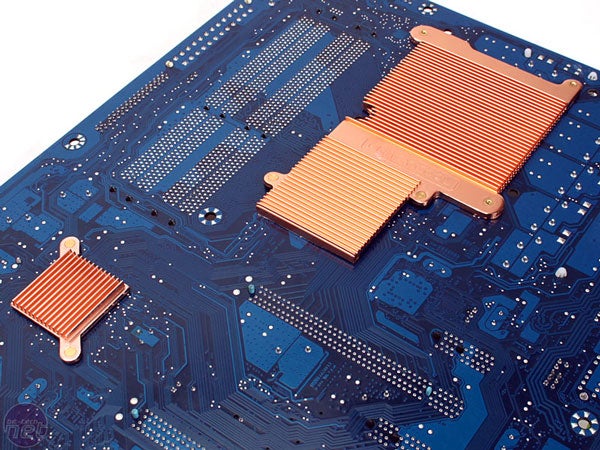 It’s called the Crazy Cool, which is quite nauseating, and you can only leave it installed if you’re using a stock heatsink. As we use a Zalman cooler during our testing which has a backing plate the Crazy Cool was consigned to the box. Gigabyte includes a couple of alternative fixings for use when you remove the cooler which are horribly fiddly to install.

The I/O panel is a work of wonder as you get the full complement of audio connectors, a mini Firewire, six-pin Firewire, dual PCI-E Gigabit LAN and eight USB 2.0 ports. The only legacy ports are a pair of PS/2 for your mouse and keyboard so eight USB ports gives you huge scope for connecting your peripherals and if you have ports mounted on your case there are headers for four more USB ports and one more Firewire.


On the downside there are no activity or power lights on the board so you can’t be sure whether it’s safe to install or remove components, and that’s quite disconcerting.


The layout is good but the top graphics slot blocks the memory latches and you can’t release a double slot graphics card unless you push the ‘wrong’ end of the retention pin. As both graphics slots have equal billing in the BIOS you’re better off installing a single graphics card in the second slot. If you do decide to run CrossFire then you’ll have to face these minor annoyances and will also lose the use of one PCI-E x1 slot and one PCI slot, leaving two PCI-E x1 slots and a single PCI slot available for expansion. 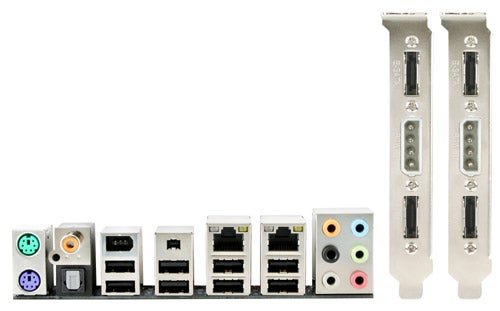 You don’t get any eSATA ports though there are two eSATA brackets that connect to internal SATA ports. Each bracket supports two drives and there are eight SATA ports on the board so that gives you all the storage options you could reasonably want.


Although Gigabyte includes the dual BIOS chips we have come to know and love, it seems that this is not enough so Gigabyte has added a system where you can also update from a BIOS file on a CD or hard drive.


X38 includes some novel features that take the overclocking fight to nVidia. There’s support for XMP (Extreme Memory Profile) which is Intel’s answer to SLI memory and is reserved for use with DDR3 memory. Compatible memory modules contain SPD settings that are triggered when the memory is used with a compatible X38 motherboard. The significant point is that Intel appears to be embracing overclocking for the first time in living memory.


We’re also told that Intel has come up with software named Extreme Tuning Utility as an answer to nTune. Our test motherboard came with the software on a CD-R that appeared to be complete however there was no sign of the utility.


Then there’s the point that the dual graphics slots not only support 16 lanes of PCI-E each but they are compliant with the PCI-E 2.0 standard, which has double the bandwidth of the original PCI-E standard. We clearly had stacks of bandwidth in every part of the system so we lined up some top components for your testing including a Core 2 Extreme QX6850 processor, 2GB of OCZ PC3-1600 memory with the all-important XMP profile, two PowerColor HD Radeon HD 2900 XT graphics cards and a Hitachi 7K1000 hard drive, all running on Windows XP SP2.

We started by running an Asus Blitz Formula P35 board with OCZ PC2-9200 Reaper memory to get some baseline figures and rapidly reached a handful of conclusions. The first is that PCMark05 reports lower graphics performance when you use a pair of HD 2900 XT graphics cards in CrossFire while the 3DMark06 figures head off to the stratosphere. 3DMark06 is correct in this instance and PCMark05 is wrong but more annoyingly than that we also carried out some runs with Bapco’s SYSmark 2007 benchmark and found that it doesn’t think much of CrossFire or overclocking.


The Blitz Formula performed very nicely and we were able to raise the FSB from 1,333MHz to 1,600MHz to give a clock speed of 3.51GHZ, although this meant we had to play with the memory divider and drop the memory speed from 1,067MHz to 975MHz. This raised system performance by eight per cent.


Then we ran the Gigabyte X38T with the OCZ memory and found, unsurprisingly, that performance is identical to the Blitz at standard speeds. Raising the FSB to 1,600MHz made the system unstable so we ended up at a figure of 1,520MHz for both the FSB and OCZ memory and a CPU clock speed of 3.42GHz. The result was slightly higher memory performance than the overclocked Blitz but system performance that was essentially identical.

We backed these tests up by also using some slower Kingston KHX11000, which ran at 1,260MHz instead of the 1,520MHz we saw with the super-fast OCZ. The difference in performance was absolutely negligible, which backs up the findings in our recent DDR2/DDR3 memory round-up.


At this point it occurred to us that the QX6850 might be the culprit as it’s not much of an overclocker so we plugged in a Core 2 Duo E6700 that runs on a slower 1,066MHz FSB. We were able to overclock by 20 per cent to an FSB of 1,280MHz with the DDR3 OCZ memory which was rather disappointing as we’re used to seeing Core 2 Duos that shoot at least 30 percent past their standard clock speeds.


On this showing there is no benefit in running astronomical memory speeds on a Core 2 processor, but we already knew that. The benefits of running CrossFire are already clear provided you can stand the hassle, expense and noise. Let’s face it, if you want a superb experience you run a single GeForce 8800 GTX.


Having said all that it’s very early days for X38 and as we figure out its wiles and ways we may well change our opinion of the new chipset, especially when PCI-E 2.0 graphics cards come to market and 45nm Intel processors hit the streets.


For the time being we’re unconvinced by Intel’s X38 chipset and DDR3 memory but Gigabyte has done a decent job with the GA-X38T-DQ6 and it looks like it could be future-resistant for a year or two which is pretty good going in this game.