The chipset at the heart of the Gigabyte GA-M720-US3 is the Nvidia nForce 720D. It’s a chipset model code that is a bit misleading not least because the final digit is D for Delta rather than a zero. That and the fact the nForce 720D is a single chip and therefore not really a chipset at all.


Although the model code nForce 720D may sound as though it should have a great deal in common with the nForce 720a there are some important differences. For one thing the 720D doesn’t have integrated graphics and for another the AM2+ socket on this Gigabyte also supports the latest AM3 Phenom II processors. AM3 uses one pin less than AM2+ so you can fit an AM3 CPU in a Socket AM2+ board but cannot fit an AM2+ CPU in a new AM3 board. 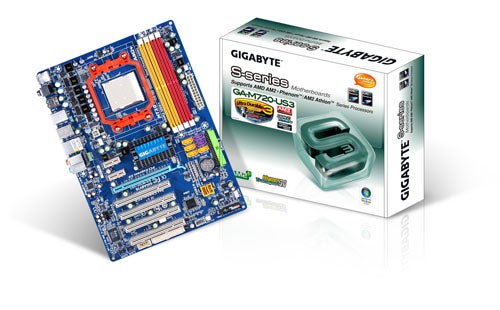 This places the 720D in select company among Nvidia chipsets as there are only three models that support AM3. The nForce 980a SLI supports triple graphics slots, the nForce 740a SLI works with dual graphics cards and this 720D supports a single graphics card.


The Gigabyte GA-M720-US3 supports both AM2+ and AM3 processors which might be seen to pose a problem as the memory controller is in the CPU core rather than the chipset. AM2+ processors support DDR2 while AM3 Phenoms support both DDR2 and DDR3 memory.


Gigabyte has equipped the GA-M720-US3 with four DDR2 slots that support up to 16GB of dual channel 1,200MHz memory which may sound a bit odd. After all, who would want to use a new AM3 CPU with DDR2-1066 memory instead of faster DDR3-1333 which requires less power?


The answer seems to lie with those avid gamers who love AMD processors but who are keen to upgrade from Phenom to Phenom II without dumping the high end DDR2 memory that they have recently bought. 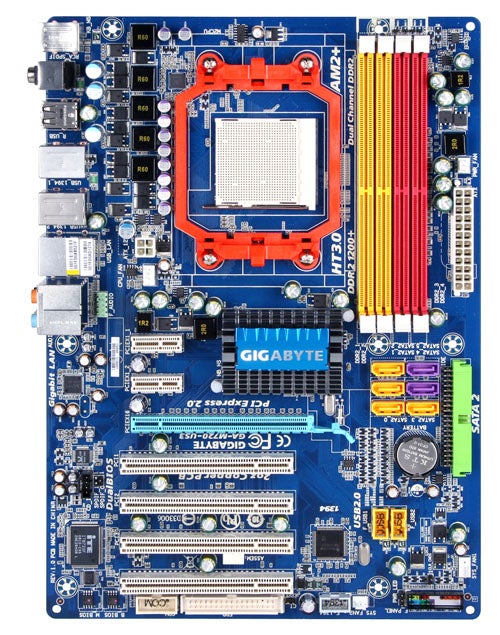 
Fast DDR3 can be relatively expensive but Phenom II works perfectly well with DDR3-1,333MHz which is far cheaper than you probably think. Would you believe £40 for 4GB?

The Gigabyte is an under-sized ATX motherboard that measures 305mm x 215mm and looks similar to a number of budget models from MSI which also uses this form factor.


The nature of the Nvidia chipset means that the ports and connectors are arranged around the centre of the board instead of the usual Southbridge location towards the bottom of the board. This means that the six SATA connectors are placed above the single graphics slot between the passive cooler on the chipset and the laid down IDE connector. It’s a convenient location which is more than we can say about the four-pin ATX-12V connector which is uncomfortably close to the CPU fan connector and the mounting frame for the CPU cooler.

In appearance the Gigabyte is a strange mix of old and new. The I/O panel packs in eight USB 2.0 ports, a Firewire port, a mini Firewire port, Gigabit Ethernet, two PS/2 ports and a full selection of audio connectors. The board supports a PCI Express 2.0 graphics slot and two PCI Express x1 slots along with four PCI slots. It’s been ages since we saw more than two PCI slots on a motherboard and it makes you wonder why Gigabyte didn’t go the whole hog and make the GA-M720-US3 Micro-ATX.


There are two headers at the foot of the board for four more USB ports and a header for a third Firewire port but you don’t get any brackets in the box.


The only negative point that stands out is that the passive cooler on the chipset hits 70 degrees idling in the Windows desktop if you don’t use a case fan and will rise to 80 degrees under load. With a case fan the chipset cooler sits at a steady 35 degrees which seems far more acceptable to us, though certainly a lamentable necessity.


We tested the GA-M720-US3 with our usual Phenom II X4 810 and found that performance was slightly lower than comparable AMD 790FX/GX models, perhaps as a result of the slower DDR2 memory that we were using. Overclocking was also a disappointment as we couldn’t raise the base clock beyond 235MHz which gave a CPU speed of 3.06GHz. This CPU will happily run at 3.4GHz on most motherboards and up to 3.6GHz on a good board so the Gigabyte doesn’t impress in the overclocking stakes. 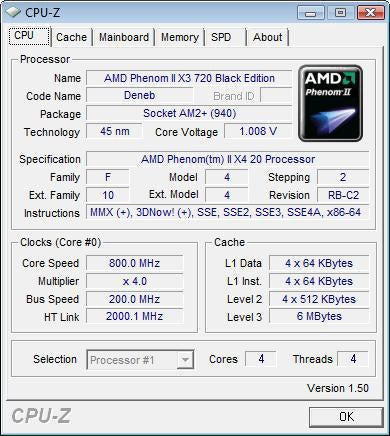 Things took a turn for the better when we switched to the triple core Phenom II X3 720 as the Gigabyte has a trick up its sleeve. In the BIOS you can use a hidden option Ctrl-F1 to enter Advanced Chipset Features and then you can enable Nvidia Core Calibration and turn on the fourth core in this triple core processor. Gigabyte is somewhat coy about this feature as Ctrl-F1 isn’t mentioned on the POST screen and neither does it appear in the manual. We would have been none the wiser if we hadn’t been shown a Gigabyte marketing presentation that explained how to unleash the fourth core.


Presumably Gigabyte is keen to sell the GA-M720-US3 by spreading word of this feature without upsetting AMD too much. The results of enabling the fourth core in the X3 720 are quite intriguing as it has a higher clock speed than the X4 810 so it starts at 2.8GHz and overclocks to 3.29GHz which is pretty impressive when you consider that the Gigabyte costs less than £55 while a Phenom II X3 720 is £40 cheaper than the X4 810.


On the face of it the Gigabyte GA-M720-US3 is unimpressive but once you unlock a triple core X3 720 you’ll see a different side to this motherboard and should be thoroughly impressed by the value that it offers.