When the Gigabyte GA-EP35-DS4 goes on sale next week it’ll sit alongside the GA-P35-DS4 in Gigabyte’s extensive range of P35 chipped motherboards. The difference between the two models is that extra letter E in the model code which stands for Energy.


You might be expecting proud boasts of extra power and performance but Gigabyte’s new range of Dynamic Energy Saver motherboards actually claim that they will save electricity which cuts costs and takes a tiny step towards helping to save the planet.


When Gigabyte sent me a sample of the GA-EP35-DS4 it said that the board would sell at a £5 premium over the regular P35-DS4 but it turns out that this information is slightly inaccurate. If you follow this link, you’ll see that the Dynamic Energy Saver software is available as a free download, provided you have a suitable P35 or X48 motherboard. The GA-EX38-DS4 also qualifies but seems to have been left off the list. 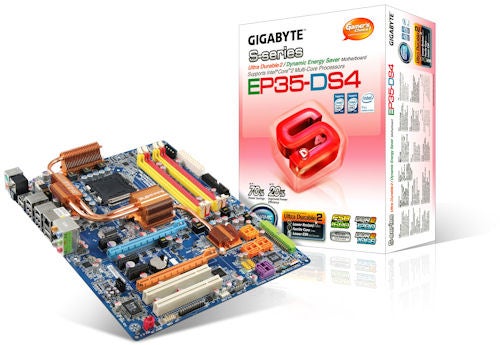 I don’t want to give the game away or anything but the model code on the GA-EP35-DS4 is printed on a sticker that has been carefully overlaid on the original GA-P35-DS4 code.


That’s a good thing to my mind as it means that Gigabyte is offering an intriguing feature to those of its customers who have bought an Intel motherboard in recent months without any nonsense about throwing away hardware that is nearly new.


Let’s take a look at the P35-DS4 before we deal with the power saving feature. It’s a CrossFire-esque P35 model that has a similar list of features to the Abit IP35 Pro that we previously reviewed.

The Gigabyte sports a pair of PCI Express graphics slots but doesn’t fully support CrossFire as the P35 chipset only feeds four lanes of PCIe to the second graphics card severely limiting its bandwidth. The passive cooling system for the chipset and power regulation hardware is extensive but doesn’t go to the lengths of the MSI Circu-Pipe system. During our testing the cooling worked immaculately and remained cool to the touch yet it was so compact that we had no trouble installing a chunky Zalman CPU cooler and GeForce 8800 GT graphics card. The only glitch is that the CPU fan connector is positioned inside the ring of heatpipes so it’s quite fiddly to connect the fan once the cooler is in place. 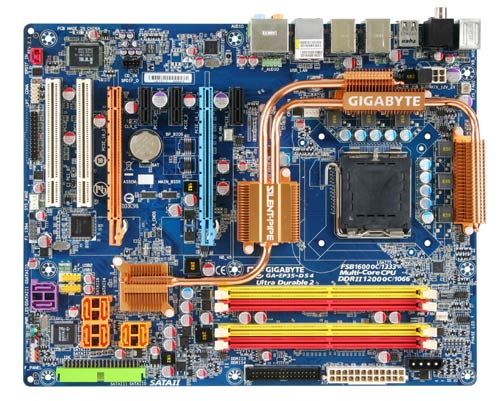 The rest of the layout is reasonable with all of the major components in logical places however the USB headers and front panel connectors seem rather mixed in with the SATA connectors and we would’ve preferred to see them all nearer the boards edge, like on the Asus Striker II Formula. Gigabyte uses its regular SATA controller chip to support an ATA133 connector and it also adds in two more SATA connectors to bring the total to eight which is heaps more than any of us need so it supplies a bracket that transfers two SATA connections to eSATA ports. It would have been neater to have positioned the eSATA ports on the I/O panel but that prime location has been saved for eight USB ports, two Firewire, Gigabit LAN, analogue and digital audio connectors and a pair of PS/2 for your mouse and keyboard. Lovely job.

You might expect that we’d compare the performance of the Gigabyte with the Abit IP35 Pro but we came across an interesting facet of P35 behaviour. We originally reviewed the Abit with a Core 2 Duo E6750 and it behaved as we expected but for the last few reviews we’ve been using a Penryn Core 2 Extreme QX9650 and the Gigabyte ran the new CPU like a champ. We plugged the Abit back together for comparison and performance was about 20 percent lower with the QX9650 than the Gigabyte managed which suggests that Abit BIOS support for 45nm CPUs could do with some work. Instead we pulled some figures from an MSI X38 Diamond review where we used the same CPU, graphics card and hard drive.


There’s a difference as the X38 runs DDR3 memory but the two platforms have performance that is very, very similar. As we were using a Core 2 Extreme processor we were able to raise the clock multiplier instead of cranking up the front side bus and were pleasantly surprised to find the QX9650 was happy to run at 3.67GHz which seems remarkable for a P35 motherboard.

‘So what about the Dynamic Energy Saver software?’ I hear you cry.


Gigabyte calls the utility ‘Dynamic Energy Saver v1.0 Software power by intersil’ which suggests it has been bought in from intersil 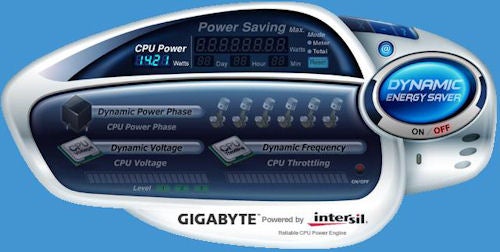 The interface for the software is fairly typical of the sort of overclocking software that comes with many motherboards. The difference here is that the software is used to save power without sacrificing performance. It may not be clear from the screen grabs but the software shows the rotating crankshaft from an eight cylinder engine which revs up as performance increases. Gigabyte mirrors this display with a dozen LEDs on the board that flash dynamically to represent the system load. In the main I hate unnecessary on-board LEDs but this display is rather soothing and has a mesmerising quality. 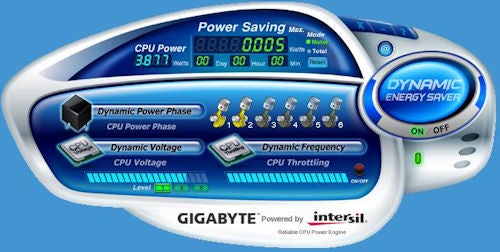 The software drops power consumption from 105W to 100W in Windows and from 185W to 175W when the system is loaded in 3DMark06. That’s a saving of 5W with the system under minimal load rising to 10W under heavy load. Performance is unaffected, although the results in 3DMark06 and PCMark05 may suggest otherwise as there is a margin of error of some two percent.

There’s a third option where you can enable CPU throttling which cuts power consumption even further to 95W in Windows and 140W under load however performance takes a massive dive so this option seems somewhat pointless as you might just as well buy a cheaper, slower processor in the first place.

Gigabyte’s power saving software is a handy bonus but the star of the show is the GA-P35-DS4 motherboard which is the best P35 model that we’ve seen to date.