With the launch of Core 2 Duo, eyes have suddenly turned to the motherboard manufacturers for a decent LGA775 motherboard. If you’re unlucky enough to already be on the LGA775 platform, there is a high chance that your motherboard doesn’t support Core 2 Duo. For others, all it will take is a BIOS update. But, as I mentioned in my Core 2 Duo article, some motherboards are being sold as Conroe compatible, but only with a BIOS update. If you get shipped a motherboard with an old BIOS on it, you probably won’t even be able to POST with a Core 2 Duo inside let alone update the BIOS.


So what’s a guy to do? One option is to take a compatible board that may or may not need a BIOS update and the cheapest Celeron you can find, which is around £30. Use this to update your BIOS, and wait out for Core 2 Duo prices to drop even more. In a few months, the cost of the Celeron would be absorbed in your savings and you’ll have a Core 2 Duo ready motherboard. Then you’re just a £10 eBay bid away from coupling that Celeron with a 915G motherboard and upgrading that aging backup machine.


If you’re not the type of person that likes to hunt around to find out which boards are compatible, then getting a 965 chipset motherboard is the obvious answer as every board will be compatible thanks to its almost simultaneous launch. With that in mind, we take a look at the Gigabyte GA-965P-DQ6 motherboard, to see how the 965 chipset performs and how well Gigabyte has implemented it. 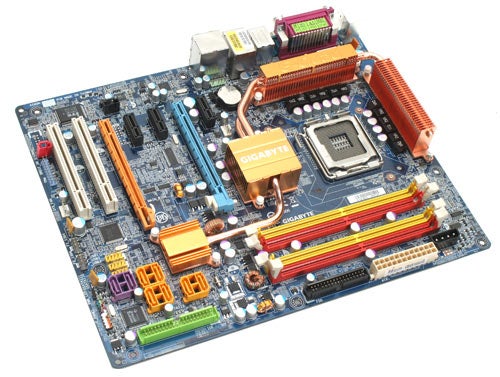 The 965 chipset is aimed at the mainstream, with 975X maintaining its lead – mainly due to its support for CrossFire. The 965 chipset has several tweaks in the memory performance, so it will be interesting to see how it improves performance. We also see the inclusion of the new ICH8 south bridge.


Despite the mainstream status of the 965 chipset, Gigabyte has decided to build a pretty top-end board around it. Although they have three different models at varying price points, this gives an example of the best case scenario.


Naturally, being LGA775 it supports all current processors and is apparently ready for the new “Kentsfield” Quad Core processor that will be launched later in the year.


Both the north and south bridge are cooled by a silent heat-pipe system. Although it will cool passively to an extent, it relies on air coming from the CPU fan to cool it down. With ICH8 we see the introduction of a more sophisticated temperature measurement and fan controlling system, so even our high-end X6800 was running with a fan barely spinning and sometimes not spinning at all. So you’ll want to make sure you have a nearby case fan to keep the air moving. Ours was tested in an open test-bed, but we didn’t have any over-heating issues. 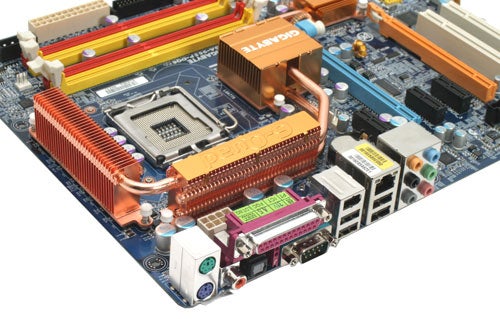 There is no doubt that Intel’s new Quiet System Technology is much better than the system used on the 975X motherboards. However, the sacrifice of using ICH8 is that there is no native IDE support. Gigabyte has solved this issue with a secondary chip on board, adding in another two SATA and a single IDE channel. That’s a total of eight SATA ports.

Networking is provided a single Marvell powered Gigabit port. Audio is provided by Realtek with the ALC888 chip. This is 8-channel HD audio, with all the necessary analogue outputs as well as optical and coaxial S/PDIF.


On the back panel there are four USB 2.0 ports and a single FireWire port. Although there are another two FireWire headers and three USB headers on the motherboard, there is nothing provided to take advantage of this. Although most cases will have an extra two USB ports on the front, it would have been nice to have some blanking plate adapters as well. 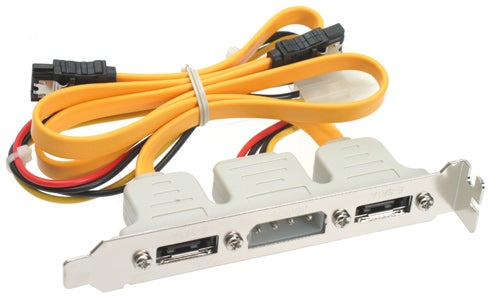 Making up for this exclusion are two blanking plates, each with two external SATA (eSATA) connections on them. Unlike most implementations of this I’ve seen, it also comes with a cable that supplies power externally too. Until we see every motherboard with eSATA connections, this will have limited use and the hard drive won’t be as portable as you might want. I think a USB or FireWire enclosure makes a lot more sense as the drive will be protected somewhat and it will be compatible with almost any computer.


There is a single x16 PCI Express graphics slot, and a x4 slot that initially looks the same. It is worth noting that this won’t support CrossFire. There are three x1 PCI Express slots and two PCI slots.


Naturally, this board is aimed at overclocking and the board offers quite a few features. You can fully manipulate the FSB, PCI-E Frequency and CPU Multiplier. We had trouble increasing the multiplier on our X6800 but this is apparently being fixed in a new BIOS release (allegedly Intel changed the multiplier specification at the last minute). By pressing CTRL+F1, it opens up the options a little so that you can adjust memory timings.


That’s most of the important settings covered really, so kudos to Gigabyte. However, I had a lot of trouble overclocking this motherboard. Simply adjusting the voltage was enough for the system to just keep rebooting and never posting. At other times, I was stable running our benchmarks at 400MHz (compared to the default 266MHz) front side bus. Later though, the board again wouldn’t post.


This demonstrates that the the board is capable, but it’s a little buggy right now. I tried two BIOS updates, and then later discovered that I have an early board revision. I’m going to give Gigabyte the benefit of the doubt and put my issues down to this. 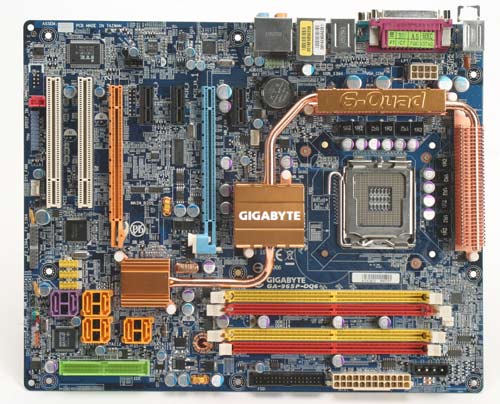 We tested this board using the same benchmark routine as used in our Core 2 Duo article. For more information on this, view this page. Obviously the system was kept the same as our reference X6800 setup, using 2GB of Corsair memory running at 4-4-4-12 and 800MHz and the same Seagate Barracuda hard drive.


So how did 965 compare to 975X? Surprisingly, almost identically. Most tests were within a few seconds of each other. Although generally our tests are pretty much dead on each time we run them, this is close enough to be attributed to variance in results. The only real test that showed an improvement was VirtualDub and all VirtualDub related multi-tasking tests, where there was a 10 second (1 per cent) improvement in performance.


So all in all, the 965 chipset is a good choice if you don’t want to go down the CrossFire route and you’ll definitely get a board capable of running Core 2 Duo.


What about this particular Gigabyte board? Well, as it stands, overclocking is only a maybe and it seems a little expensive at £143.94. For this sort of money, you could buy a compatible 975X motherboard and give yourself the option of running CrossFire at a later date. 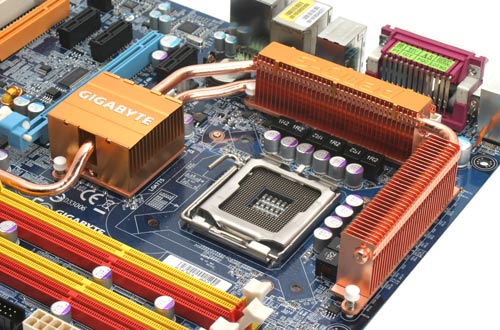 
If you want a hassle free, well-featured Core 2 Duo ready motherboard, this is a good choice. But if you are willing to look around and see how other people have gotten on, there are several bargains to be had in the 975X segment.