It’s finally arrived, the first retail nVidia nForce4 SLi for Intel motherboard. Ok, ok, I’ve calmed down now, after all it’s just another motherboard chipset, or is it? Considering that this is nVidia’s first attempt at creating a chipset for Intel processors it’s no mean feat to bring out an SLi solution at the same time. There are some obvious reasons why nVidia has gone down this route with the main one being that Intel doesn’t have a consumer level SLi capable motherboard at the moment.


Of course I imagine that Intel isn’t too happy about more competition in the chipset market, regardless of whether it’s a solution that Intel doesn’t offer itself. There are some rumours about Intel launching its own SLi compatible solution shortly, but so far it is only a rumour. 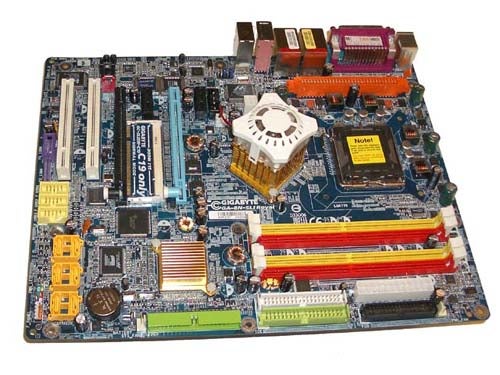 However, the nForce 4 SLi Intel Edition chipset is still an unproven platform and the new Gigabyte GA-8N-SLi Royal is the first production board available for review. But if this first board is anything to go by, Intel will be looking at some stiff competition in the motherboard chipset market for its own CPUs.


One of the most interesting features of the nForce 4 SLi Intel Edition is that it has native support for 667MHz DDR2 memory. This is not yet a ratified standard, but Corsair is already offering memory which will run at this speed and faster. The new Twin2X CM2X512A-5400UL modules we were sent to test the GA-8N-SLi Royal with worked flawlessly at 667MHz on a 1066MHz bus with a 3.73GHz Pentium 4 Extreme Edition CPU.


nVidia might be one step ahead of Intel when it comes to memory speeds at the moment, but I doubt it will take to long before 667MHz DDR2 memory becomes the norm. But nVidia seems to have anticipated this and the new DualDDR2 memory controller has an independent bus for each memory module. This should allow for better performance when compared to competing chipsets that share the same bus for each pair of installed modules. 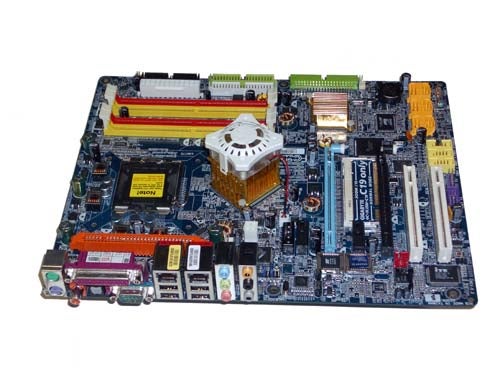 Add to this nVidia’s QuickSync and DASP 3.0 technology and you’ve got most of the features from the nForce 2 chipset integrated into the new nForce 4 SLi Intel Edition core logic. QuickSync allows for better performance with asynchronous memory whereas DASP 3.0 is a high performance memory pre-fetch core-logic. This should give the CPU quicker access to data it needs by predetermining what the CPU will need next. This is all fairly complex and there’s no easy way to explain how it all works, but it should all count towards better memory performance and lower latency times.


Another advantage is support for dual channel asymmetric DIMM population. What this means is that you get dual channel memory performance even if you use three modules. This is a unique feature to the nForce 4 SLi Intel Edition chipset, although very little stays unique for long in this industry.

To my knowledge this is also the first Intel CPU solution to use HyperTransport as the chipset interconnect. However, this is a slower 800MHz 8-bit solution rather than the 1GHz 16-bit version found on current AMD platforms. It should provide plenty of bandwidth for PCI Express devices, which is important when you start sharing the PCI Express bus between devices like Gigabit Ethernet adapters and HDTV-tuner cards, both of which require a lot of bandwidth.


It’s good to see that nVidia decided to go for two IDE controllers, rather than the single one that Intel offers on its current chipsets. This means that you can still use four IDE devices, as well as a further four SATA devices. A new feature for the nForce 4 SLi Intel Edition is RAID 5. This allows you to run a RAID using three hard drives, two are striped for performance and the third disk is the parity volume. The parity disk keeps track of the data on both of the other two disks and if one fails the parity disk is used to rebuild the array together with the remaining working disk. 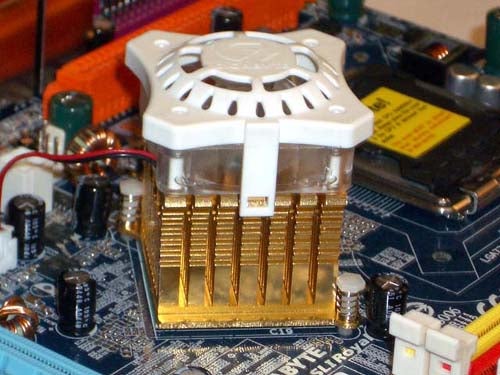 One of the best features on this motherboard is also one of the most simple. Gigabyte has used a new type of SATA cable that locks to the motherboard connectors as well as newer SATA hard drives. This means that there’s less chance of the cables falling out during transit – there are also plastic surrounds for each port on the motherboard, making them slightly more sturdy.


The remaining features have been carried over from the nForce 4 SLi chipset for AMD, with commendable assets such as the Gigabit Ethernet controller with the ActiveArmor firewall making a welcome appearance.


Of course Gigabyte has added plenty of features to the already long list. A Promise RAID controller with support for a further two IDE and SATA drives has been fitted alongside a FireWire 1394b controller for high-speed 800Mbit/sec FireWire devices. A second Gigabit Ethernet controller is also part of the package as well as 7.1-channel AC97 sound. This is one of the low points of the board, as the new Intel HD compatible audio solutions offer much better audio quality.


Gigabyte has also included its signature DualBIOS and U-PLUS D.P.S power module. Unfortunately, the latter doesn’t fit that well on the GA-8N-SLi Royal due to the design of the heatpipe cooler. It gets too close to the chipset and with a larger CPU cooler it won’t fit in its slot. The main chipset heatsink comes with an optional fan. 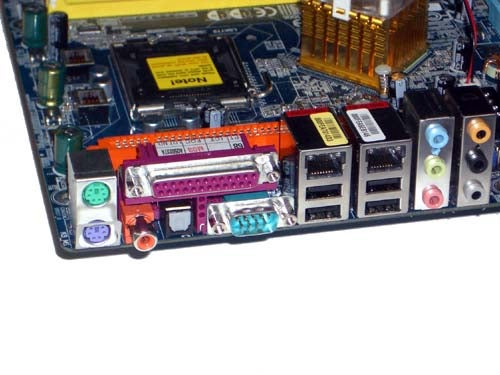 The final part of the package is a small USB Bluetooth dongle. Although our early sample didn’t ship with one of these dongles, another Gigabyte board that I had in the labs did come with one. It’s using the same software as the MSI Star Hub and offers similar Bluetooth functionality.


The I/O panel consists of two PS/2 ports, single parallel and serial ports, optical and coaxial S/PDIF outputs, four USB 2.0 ports, two Ethernet ports and six audio connectors. Two brackets are supplied in the box, one with two USB 2.0 ports and the other with a further two USB 2.0 ports and a FireWire 1394a and 1394b connector. You also get six SATA cables and a retention mechanism for the SLi bridge connector.

The board layout is very cluttered, mainly due to all the features that Gigabyte has tried to squeeze in. The four pin CPU fan connector as well as the 12V power connector are located in a very awkward place, especially if you use the U-PLUS D.P.S module. Expandability is also limited with two PCI slots and one usuable x1 PCI Express slot if you’re running an SLi setup. There are two spare fan connectors, but both of these are located towards the front of the board, so neither can be used with a rear mounted case fan.


The GA-8N-SLi Royal sample that Gigabyte sent is revision 0.2 so it’s not a retail ready product and I had some major stability issues while testing. Far Cry would crash out in the early stages of our benchmarking demo and SYSMark 2004 behaved in a very peculiar way – so we couldn’t get results from either. Gigabyte seemed unable to figure out the fault as I received no reply to my emails with regards to these issues. 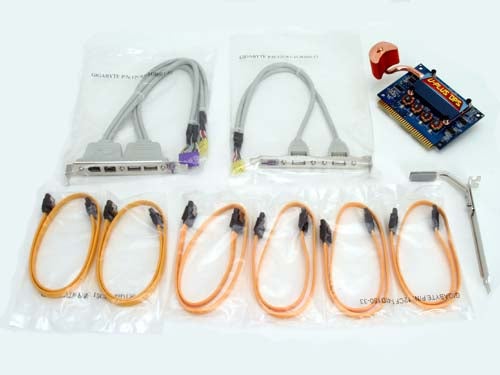 Nonetheless, after a couple of days of cursing and several reboots I managed to get most of our 3D benchmarks to behave in a reasonable way and I even managed to get some PCMark 2004 numbers out of the board. nVidia kindly lent us a couple of GeForce 6800GT graphics cards to test with and the numbers are pretty impressive. Although I don’t want to draw too many conclusions until I get a final production board, I think a few gamers might be persuaded to move back to an Intel CPU in combination with the new nForce 4 SLi Intel Edition chipset.


Moving on to Half-Life 2 I got over 90fps no matter what the settings were changed to at 1,024 x 768 – basically this indicates that the CPU is the limiting factor, with the graphics cards not being used to their full potential. Similarly at 1,600 x 1,200 there was little change in performance, although for some odd reason the results were slower using 4x FSAA than with 4x FSAA and 4x AF.


3DMark 03 is getting old now, so a score of 20,903 is high, but somewhat moot. That said, the 3DMark 05 score of 8463 is quite impressive. The PCMark 2004 scores are the only system level benchmarks that I managed to run due to the stability issues, but the memory score here is very healthy at 6380, beating the 925XE chipset by 110 points using the same CPU. I haven’t tested the new Intel 955X chipset yet so I can’t make a comparison here, but it seems like nVidia has created a very fast platform. 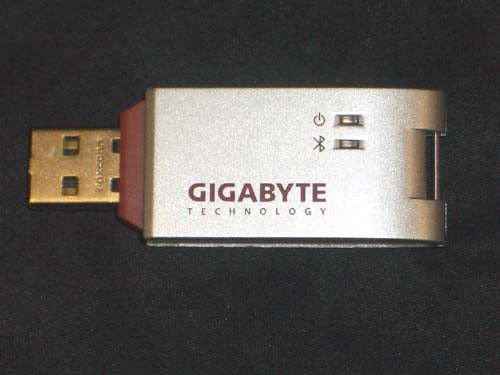 This is a product that’s quite hard to sum up – on one hand we have what looks to be the best performing chipset for Intel processors, while on the other hand the stability issues of the Gigabyte board were a letdown. To be fair though, this is often the case with pre-production motherboards and I would hope that the full retail products will have these issues ironed out.


Feature wise the GA-8N-SLi Royal is up there with the top of the range boards on the market and this is exactly were Gigabyte is pitching it.


The GA-8N-SLi Royal is fairly expensive at £159.80 when compared to most of the AMD nForce 4 SLi boards, but this is the first of its breed and Intel platforms tend to be more pricey than AMD ones anyway.


Our sample of the Gigabyte GA-8N-SLi Royal might not be quite retail ready, but it put in some impressive benchmark numbers in the tests that I managed to run. The board also has a wide range of features apart from the SLi core – just make sure you need the complete feature set before putting down a wad of cash.


We’ve been contacted by Gigabyte with regards to the U-PLUS D.P.S power module and the poor fitting of it. As this was a pre-production board, the module supplied will not be the same as the one that will ship with final production boards. A module will be designed specifically for the GA-8N-SLi Royal which won’t cause any installation problems.