Gigabyte has deployed the GK104 version of the GTX 860M core, which means that the two cards inside this system are based on the desktop GTX 680 card – a powerful chip, but one that was released back in 2012.

Nevertheless, the pair of cores inside the Gigabyte deliver enviable power. Combined, the cores have 2,304 stream processors clocked to a minimum of 797MHz, and there’s 8GB of GDDR5 divided across the two chips – the same amount of memory that’s included in the Xbox One and PS4.

Gigabyte’s SLI configuration is designed to take on the GTX 880M found in the Alienware, and the Aorus proved a formidable foe. We loaded Battlefield 4 and Bioshock Infinite at their highest settings, and the Aorus hit 44fps and 62fps – the equal of the Alienware’s card. In Crysis 3 the Gigabyte’s 48fps score was five frames faster, but in Batman the Aorus could only manage 51fps: still playable, but a long way behind the GTX 880M’s 98fps. It’s the sort of score we’d expect from a single GTX 860M, and assume it’s one of the vagaries of dual-graphics setups. 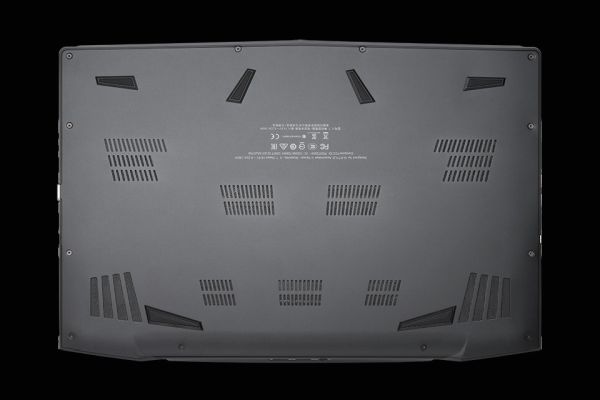 There’s no doubting the Gigabyte’s power in theoretical benchmarks, either. The Gigabyte’s score of 4,606 in the demanding 3D Mark Fire Strike test sits between the Alienware and MSI machines. That pattern was repeated in Unigine Heaven’s tough Extreme test when run at 1080p: the Gigabyte’s 26.9fps is less than half a frame behind the Alienware.

Our Aorus sample includes a 2.5GHz Core i7-4710HQ processor and 16GB of RAM. It’s a potent combination that scored 6,254 in PC Mark 7 and 13,009 in GeekBench 3 – both figures that easily outpace the Alienware and MSI systems. Gigabyte has given this machine a bump for retail, too, by upgrading to an i7-4860HQ, so you’ll get a little extra performance – the new chip is clocked to a lower 2.4GHz, but its 3.6GHz Turbo Boost peak is 100MHz higher than what the i7-4710HQ can manage. 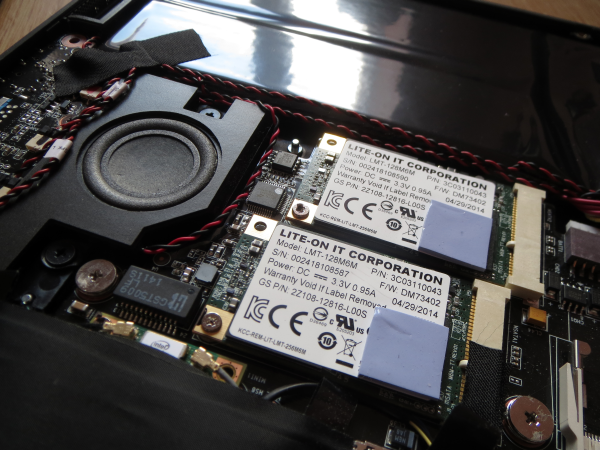 The Aorus has stonking storage. Gigabyte has deployed three LiteON mSATA SSDs, each with a 128GB capacity, in RAID 0 – a striped array that concentrates on performance. That means absurd sequential read and write scores of 1,327MB/s and 895MB/s, which is several times the speed from the single SSD in the Alienware. The RAID array returns 342GB of formatted space, and it’s paired with a 1TB hard disk (a third of which you’ll probabaly want to use to backup the data on those SSDs).

This is the first gaming laptop we’ve seen recently to make a concerted effort at controlling fan noise thanks to a trio of fan modes: Auto, Stealth and Turbo. They’re chosen in the Command & Control software, which otherwise houses many options found elsewhere in Windows.

We stress-tested the Aorus in its Auto mode and the fan quickly spun up to an irritating, high-pitched whine that equalled the volume of the Alienware system. Switching to Stealth mode made little difference to the X7’s audio output, and turning on Turbo mode increased the noise dramatically with little impact on temperature. 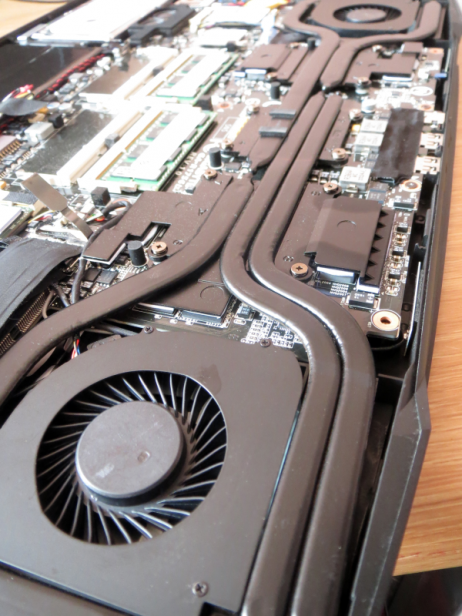 There was a little leeway when we ran a gaming benchmark. Here, Stealth mode saw the fans quiet down to modest-but-audible levels. Auto and Turbo modes retained the noise levels we saw during the stress-test. The bottom line remains the same as with other gaming laptops: if you’re playing demanding gaming titles, you’re going to want a headset.

Throughout these tests, the Aorus stayed disappointingly hot. The processor was the main culprit, hitting a toasty peak of 97°C, and the two graphics card topped out at 81°C each. That’s a lot of heat for the Gigabyte to dissipate, and not all of the hot air was exhausted from the back of the machine. The underside and keyboard warmed up, and the metal above the keyboard became too hot to touch. It’s a poorer result than the Gigabyte’s rivals, which used their larger cases to great effect.

Gigabyte has crammed a 73Wh battery into the Aorus, but it’s not capable of keeping the high-end components active for long away from the mains.

Our standard benchmark consists of a web browsing and video chat simulation with the screen at 40% brightness, and in this test the Gigabyte lasted for just over two and a half hours. It’s not a particularly good result: thirty minutes less than the MSI managed, and just half the lifespan of the Alienware.

The Gigabyte’s gaming performance was even worse. In a gaming benchmark with High Performance mode engaged and the screen at 100% brightness, the Aorus lasted for just under 90 minutes. It’s a better result than the Alienware, but it’s still not satisfactory – make sure you’re near a plug socket when gaming.

Used as our main laptop for the review period
Tested for at least a week
Used consistent benchmarks for fair comparisons with other laptops
Reviewed using respected industry benchmarks and real world use
Previous
Gigabyte Aorus X7 v2 Review Next
Keyboard, Trackpad and Verdict Review