What is the Gigabyte Aorus X5?

The Aorus X5 may be the smallest of Gigabyte’s new super-powered flagship gaming laptops, yet that certainly doesn’t mean it suffers in the specs department. This 15.6-inch speed demon boasts an overclocked Core i7 8850H chipset and GTX 1070 graphics, so you can blaze through the latest games at a silky-smooth frame rate.

Despite being the most compact 8th-generation Aorus, however, the X5 isn’t exactly slim and light. This 2.5kg beast rocks a chunky chassis that typically resembles a miniature alien spacecraft.

If you want a portable gaming laptop to take on the road every day, check out Gigabyte’s Aero 14. However, if performance is your priority – and your rig will spend most of its time sat at a desk – then a model from the Aorus family will suit you down to the ground.

Of course, at 2.5kg the Aorus X5 isn’t obscenely huge or heavy. It’s significantly more portable than its bigger siblings, the X7 and X9 – although don’t let that 15.6-inch display size fool you. The screen is surrounded by some chunky bezels, giving a form factor closer to a 17-inch machine. 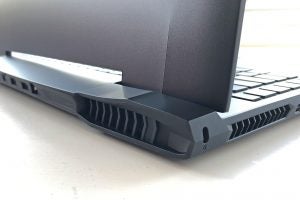 A quick glance is more than enough to confirm that this is a gaming laptop. The Aorus’ black lid sports an angular finish, peaking in the centre, while the rear end houses two enormous vents to expel all of that hot air. Not to mention the hawk designs that adorn the lid, the funky power button and the touchpad. The word ‘subtle’ certainly doesn’t apply here.

I did notice occasional hints of flex in the chassis, despite the generally solid construction. Push around the seams beneath the laptop and you’ll see some serious movement, for instance. Thankfully, it’s nothing too troublesome. The lid does a good job of protecting that display, proving quite rigid even towards the centre.

As you’d probably expect from a gaming laptop, there are ports-a-plenty along those edges. The left side offers two Type-C USB connections alongside a mini-DisplayPort, while the right edge serves up two USB 3.0 ports, an HDMI connection and an SD card reader.

Around the back you’ll find even more ports. Another two USB 3.0 connections mean you’re sorted for peripherals, while an Ethernet port can be used for nippy networking. 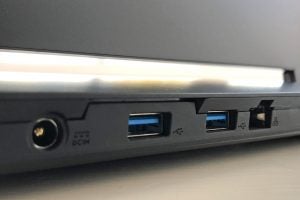 One of the most important features for any gaming laptop keyboard is the number of keys on offer. You’ll need loads if you’re into complex strategy titles and the like, and the Aorus X5 certainly doesn’t disappoint in this regard.

That sizeable chassis packs in all of the standard laptop keys, as well as a full numeric keypad and a column of programmable shortcut keys. These are all well sized, making them relatively easy to find without looking.

For example, the Enter key is afforded two rows to breathe, while the cursor keys aren’t cramped either. The shortcut keys, standard board and numeric keypad all run together, however, with no spacing between them. This takes a little getting used to when you start off touch-typing with the Aorus X5.

I also found that my key pushes occasionally registered twice by accident. This wasn’t a regular issue, although it happened enough to make it worth a mention. 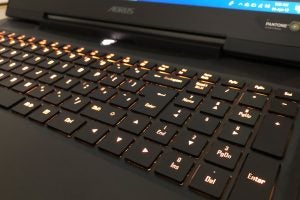 Using the Aorus Fusion app you can set up a number of profiles to suit different apps and games, complete with their own colour schemes and shortcuts. The backlighting can be controlled, with a choice of seven hues and several grades of brightness. You can also quickly cycle between three lighting settings using the spacebar and function key.

If you’re so inclined, you can also set the keyboard to light up like a Disneyland fireworks show. This feature certainly impressed my two-year-old daughter, although I’m not sure anyone else would particularly enjoy the dazzling display.

Beneath the board lies the Aorus’ touchpad, which isn’t quite as spacious as I’d expected. There are no dedicated mouse buttons, so you’ll need to push the left and right corners of the pad to simulate clicks. Thankfully, this doesn’t send the cursor skimming across the screen at the same time.

Unfortunately, the touchpad’s sensitivity was all over the place. In some apps, such as the Edge browser, two-fingered swiping to scroll resulted in barely any movement. At the same time, an identical swipe in Spotify skimmed through about two dozen albums at once. Soon after I simply gave up and plugged in a mouse. 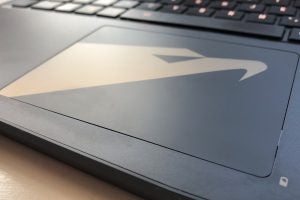 This laptop packs some real graphical punch, with an Nvidia GTX 1070 card stuffed away inside. And the Aorus X5’s 15.6-inch IPS display does the output justice, producing quite crisp and good-looking images.

Nvidia G-Sync technology is supported, so you’ll enjoy buttery-smooth visuals when playing the latest games. Seeing how the GTX 1070 isn’t as well suited to 4K output as the 1080, I’m not too distraught at the lack of Ultra HD support. Full HD images are still perfectly crisp on this size of display, even with your nose pressed up to the panel. It’s a shame that the lighter Aero 14 model offers a sharper 2560 x 1440 pixel resolution, though; and I do wonder why the Aorus tops out at 1920 x 1080.

Boost up the brightness and you’ll have no trouble seeing in strong daylight. This is helped by the matte finish, which limits the reflections beamed back at your face.

In its default state, the Aorus’ display produces reasonably accurate colours. Our tests revealed that 96% of the sRGB range was covered, in case you need to edit some photos in your downtime. However, just 75% of the Adobe RGB range was also reproduced, which matches many other gaming laptops. 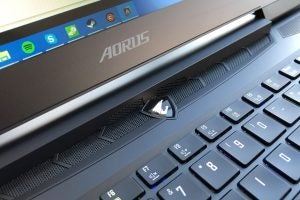 Gigabyte’s Command and Control software allows you to play around with the gamma levels and colour temperature, while Nvidia’s own control panel also offers in-depth customisation.

Above the X5’s keyboard you’ll find stereo speakers, which pump out a reasonably powerful sound. At top volume this isn’t quite as ear-piercing as expected, although neither is it tinny or distorted. The speakers work just fine for enjoying gaming on the go, although we’d recommend some proper headphones if you want dedicated surround sound feedback or to enjoy some tunes.

Dolby Atmos surround sound is supported, so you can enjoy a more immersive experience with supported content. Again, you’ll really want to use some proper headphones to get the most from this feature. 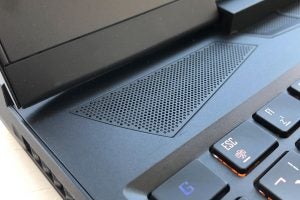 Where the Aorus X5 really excels is in the performance department. Packed inside is Intel’s Core i7 8850H chipset, running at 2.6GHz standard or 4.3GHz overclocked. That’s backed by a mighty 16GB of DDR4 SDRAM, so you already know you’re going to get some strong frame rates from demanding titles.

Sure enough, our gaming sessions were perfectly satisfying. Rise of the Tomb Raider hit an impressive 112fps for instance, even on maximum settings. We can’t see this machine struggling with any new games for quite some time.

That said, I did experience some glitches when using the Aorus X5 for everyday tasks. Standard apps occasionally crashed or stammered, and it was impossible to determine whether this was a laptop issue or simply Windows being Windows.

I also ran the standard Geekbench, PCMark and 3DMark benchmark tests, which spat out the following impressive results:

These Geekbench scores beat even the mighty Asus ROG G703, which uses Intel’s Core i7-7820HK platform, as well as the Acer Predator 17.

Of course, if you’re looking to hook up your gaming machine to a 4K monitor for some seriously outstanding visuals, the GTX 1070 card isn’t going to cut it. You’re better off looking at the Aorus X7 or X9 instead, which rock the beefy GTX 1080 GPUs. Alternatively, the ROG G703 and Predator 17 also offer a 1080 configuration.

When you’re hammering the Aorus X5 with demanding games, the bottom of the laptop can get rather toasty. Thankfully, the cooling system does a pretty good job of dissipating that heat, so I didn’t see any issues related to temperature.

However, those whirring fans soon approach jumbo-jet levels of loudness under strain, so you’ll want to crank up the game volume to cover it up. Alternatively, you can swap between different cooling modes in the Command and Control app. I’d recommend using the ‘Quiet’ setting when you’re not gaming.

The 1.5GB solid-state drive is suitably nippy too. Our tests revealed read speeds of 2552.9Mb/sec, while the write speeds were 1308.6MB/sec. You won’t be hanging around long while games load, in other words.

No-one buys a gaming laptop expecting all-day battery life – and, sure enough, this Aorus has a rather short lifespan without the power cable.

If you use the laptop for typical everyday tasks such as web browsing and media streaming, you can expect around four hours of play time. The standard Trusted Reviews PowerMark test gave a result of 5hrs 30mins. However, stick on a demanding game and that battery life drops to 1hr 30mins on average.

Why buy the Gigabyte Aorus X5?

As far as performance is concerned, the Aorus X5 is a king among gaming laptops. The premium specs mean you’ll be playing the latest titles with maximum settings for some time to come, with nary a thought for upgrades.

Of course, despite being the most compact 8th-gen Aorus machine, it isn’t quite as portable as I’d hoped. And if you’re hell bent on 4K visuals, you’ll need to upgrade to one of the X5’s bigger siblings rocking a GTX 1080.

Performance that packs a punch and all of the gaming features that you’d expect make for a satisfying – if not quite portable – entertainment machine.