There’s no denying that the Aorus’ 3,200 x 1,800 screen is sharp. The 13.9in diagonal and high pixel count means a density measurement of 264ppi, which is more akin to smartphones than laptops. The MSI managed only 141ppi, and the X5 sat at 212ppi.

The advantages are clear: text and graphics look incredibly crisp, with individual pixels practically invisible, even under close inspection. High-resolution images look stunning, and there’s an undeniable amount of screen real-estate – more than on the 1,920×1,080 MSI and the 2,880 x 1,620 Gigabyte Aorus X5. 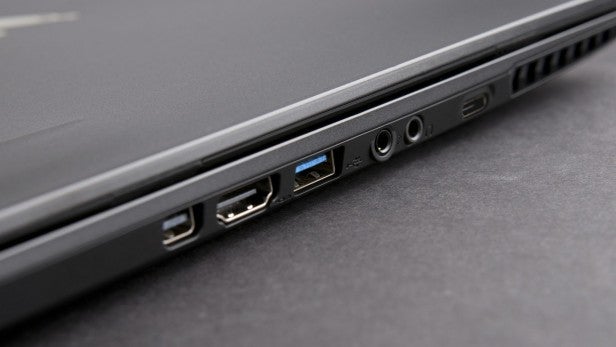 That’s all well and good, but I soon discovered some issues. While the screen is pin-sharp when handling properly optimised text and images, it doesn’t offer such performance immediately: until Windows’ own scaling settings are used, the OS is so small it’s barely legible.

Those scaling options sometimes don’t play nicely with third-party applications, either. On occasion, Windows ramps up the size of text and icons until they’re blurry, and other apps deal with the resolution by keeping everything tiny. Other apps are unusable, with buttons and texts melding into one.

That makes the Aorus’ screen inconsistent, and that’s before I’d even loaded any games. The high resolution means the GTX 970M will have to render 5.7m pixels in order to play games at native resolution – more than twice as many as the 2.07m pixels that form Full HD screens. That’s going to tax the GTX 970M, so games won’t be playable without compromising quality.

I’ve reviewed many gaming laptops that have gone beyond 1080p, but they’ve faded away over the past year or so – and with good reason. The X3 is a bit of a throwback, with an attention-grabbing resolution that won’t work well in the real world. It’s great for the spec sheet, but in reality it’s just an extra cost that doesn’t provide enough of a benefit. You’ll see why from my performance benchmarks on the next page. 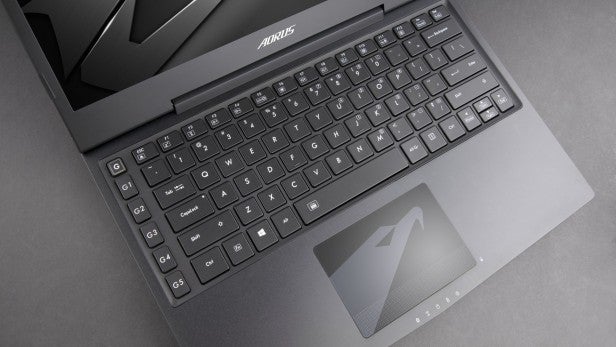 Resolution issues aside, the Aorus offers reasonable quality. Its colour temperature of 6,740K is close to the 6,500K ideal, and the sRGB gamut coverage level of 96.2% is excellent and, crucially, a long way ahead of the MSI GS60 6QE Ghost Pro. The Aorus delivered an average Delta E of 2.98, which is also better than its rival.

Almost all of the sRGB gamut will be displayed accurately, and the screen maintains good uniformity, while colours remain accurate and viewing angles nice and wide.

It’s a close-run thing when it comes to screen quality, with the Aorus X3 and MSI GS60 trading blows – but there’s no such competition in the audio department.

The X3’s pair of 2W speakers are disappointing. There’s barely any bass, and the top-end is typically tinny for a laptop. The mid-range is good, but its clear output is hindered by a lack of nuance. There isn’t any software to tweak the audio, and the X3’s peak volume isn’t that loud. A headset is recommended.

The keyboard is disappointing, despite the inclusion of a few neat features. It’s backlit, and is supplied with five macro keys – with different profiles that result in 25 unique combinations.

Problems arose before I’d begun to type, however. There’s no room for a number pad, and the Function keys are small. The cursor keys are shoved into a corner, and the up and down buttons are tiny.

The buttons are light and lack travel, and the flexible base means the typing action feels indistinct. Typing is quick, but the Aorus mimics the delicate action of a MacBook Pro, rather than the solid, firm action seen on the best gaming laptops. The X3’s keys just aren’t great for gaming and they’re a long way from the MSI, which was far better thanks to its SteelSeries-designed unit.

The trackpad has its problems, too. The surface is smooth, but the buttons are too soft – they don’t do enough to mimic the rapid, shallow clicks of the best gaming mice. It’s fine for general use, but this trackpad is only going to disappoint when gaming.

Used as our main laptop for the review period
Tested for at least a week
Used consistent benchmarks for fair comparisons with other laptops
Reviewed using respected industry benchmarks and real world use
Previous
Gigabyte Aorus X3 Plus v5 Review Next
Battery Life, Performance & Verdict Review