What is the Gigabyte Aorus X3 Plus v5?

Gigabyte says that this laptop is “the world’s most powerful 13.9in laptop”, which is a grand claim. Although, when you consider how few 13.9in laptops there are on the market and the fact that the Aorus X3 Plus v5 has top-end kit from both Nvidia and Intel under the hood, it doesn’t seem quite so far-fetched.

The Aorus also features a high-resolution screen, and an M.2 SSD. So far, so good. The downside? The entire package costs a daunting £1,900.

The Aorus is clad in matte-black aluminium with a few smart accents. The lid has a small ridged section and a smart Aorus logo, and that same logo sits on the trackpad. The system is similarly modest on the inside: an Aorus logo beneath the screen and a couple of stickers complete the look.

The thicker rear is home to two large, angled vents; speaker grilles sit at the front of the machine. The power button sits on the right-hand edge, which means it shares space with three USB 3.0 connectors, a USB 3.1 port, an SD card reader and HDMI and DisplayPort outputs.

The X3’s 13.9in screen means the machine has a compact footprint that’s just 300mm wide. I expected the Aorus to undercut competitors in both thickness and weight, too, but this isn’t the case. This is a disappointment, given that this machine’s rivals are 15.6in notebooks. 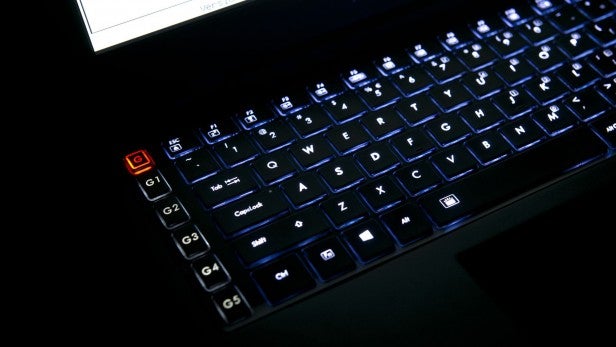 The Aorus is 23mm thick and tips the scales at 1.8kg. That’s the same thickness as its stablemate Gigabyte Aorus X5, which weighs 2.5kg. The MSI GS60 6QE Ghost Pro is slimmer than the X3 thanks to a 20mm body, and it weighs 2kg – only 200g more than the X3. This is a noticable amount more, but it’s not quite the huge leap I was hoping for.

The X3 isn’t especially slim or light and doesn’t benefit from brilliant build quality either. Pressing the metal around the trackpad sees the material creak and move, and this weakness carries through to the keyboard. The thin screen flexes, and pressing the rear of the panel causes the desktop to fluctuate – I’d buy a protective case for this machine before I even considered chucking it into a bag.

At least the base panel is sturdier and its internals are accessible. Torx screws hold the panel in place, but remove those screws and the aluminium eases free. The memory, SSD, cooling gear and Wi-Fi card are all accessible, and there’s a spare M.2 socket. In this regard, the Aorus offers greater accessibility than the MSI GS60.

The X3’s core components are powerful and typical gaming laptop fare. The GTX 970M is one of Nvidia’s best mobile chips thanks to 1,280 stream processors and a 924MHz core clock, and Gigabyte has installed the beefier version with 6GB of GDDR5 memory.

The Nvidia GPU sits alongside an Intel Core i7-6700HQ, which has four Hyper-Threaded cores at 2.6GHz with a Turbo Boost peak of 3.5GHz. It’s accompanied by 16GB of 2,133MHz DDR4 memory.

Storage comes from a 512GB Samsung SM951 SSD, and networking is provided by game-friendly Killer Ethernet and dual-band 802.11ac wireless. 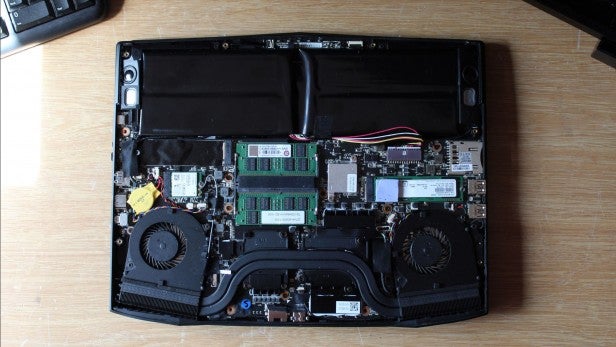 It’s a decent gaming specification, but I’m not convinced that it’s worth £1,900. The MSI GS60 replicates much of the X3’s specification in a slightly larger chassis for hundreds of pounds less, while the Aorus X5 – which also costs £1,900 – features two GTX 965M GPUs and G-Sync technology.

It’s not like there’s a huge amount of software to sweeten the deal, either. Gigabyte includes apps for Twitch streaming and a tool to program the five macro keys, and its Command and Control tool has component workloads and temperatures alongside power scheme adjustment.