What is the Gigabyte Aorus GA-Z270X-Gaming 5?

This mid-priced motherboard is designed for gaming, so it’s no surprise that the box comes with Aorus branding. That’s the name used by Gigabyte for its high-performance products, and it carries a certain weight of expectation in terms of features and benchmarks.

Related: Everything you need to know about Intel Kaby Lake

For starters, this board is littered with lights. There are RGB LEDs between its four DIMM slots and around the CPU socket, a couple beneath the southbridge heatsink and even more around the PCI connectors. The most extravagant lie on the right-hand side of the board, where they illuminate a sharp, geometric pattern.

As usual, the lights can be adjusted to use certain patterns, and millions of different colours. It’s also possible to use the lights to indicate CPU temperature, and there’s a single connector for synchronising an external light-strip. All of this is managed, as usual, from an app within Windows. 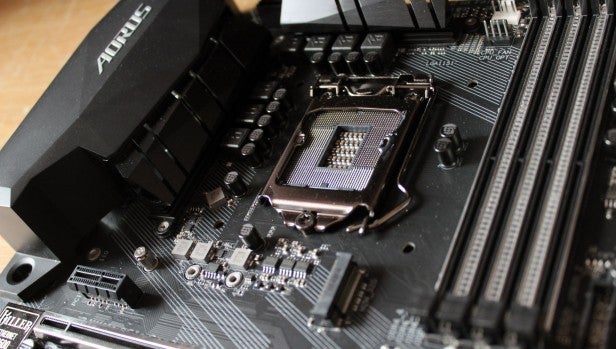 Elsewhere, the design is a mix of monochrome. The rear IO and audio circuit is covered by a large, eye-catching white shield, while the southbridge has a chunk of black metal with a metallic Aorus logo on top. This board can’t match the huge, metal design of the top Asus models, but it remains one of the loudest on the market.

It also has a good practical specification. It’s got quality SoundBlaster audio and Killer Ethernet, which is optimised for gaming – and its DDR4 tops out at 4133MHz, so it’ll support virtually anything on the market. There are the usual two M.2 sockets alongside six SATA ports, a future-proofed U.2 connector and three SATA Express ports. Not all of these can be used at the same time because of the limited storage bandwidth available, but there’s still an enviable amount of versatility. 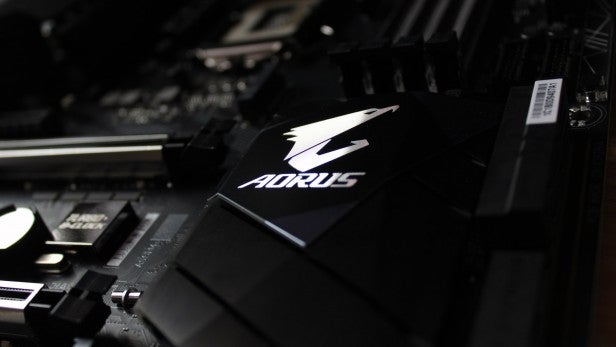 This board is one of few that still supports four Nvidia and AMD GPUs – having that much power is a luxury few really need these days – and the two main PCI-Express slots are joined by a third PCI-Express x16 slot running at 4x, and three PCI-Express x1 connectors. That’s a generous amount of expansion room – you’ll only be limited by the size of your cards, really.

There’s a POST display and OC and ECO mode buttons, but no power and reset switches – still, though, that should entice tweakers.

The amount of stuff included on this board means the layout can be a bit mixed. The five fan headers are well-placed and can be easily managed from Gigabyte’s clear Smart Fan software, but the bottom PCI slot is very close to the row of headers at the base of the board. I’m also a little concerned that the top M.2 connector is extremely close to the CPU socket., which could be a problem with large cooling fans. 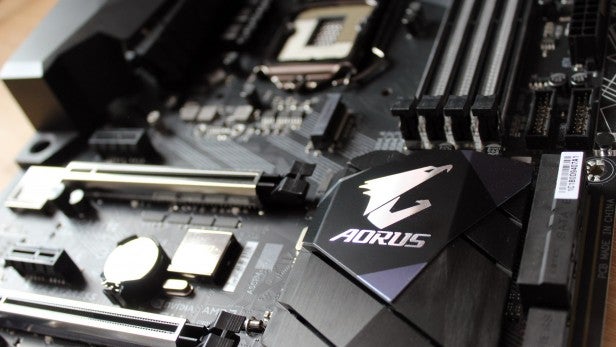 There’s also no Wi-Fi connectivity, and the backplate feels a little bare – there are the usual four USB 3.1 ports alongside Type-A and Type-C connectors, but no extra buttons.

These are minor concerns, though, and they’ll only come into play if you have very specific hardware inside your rig – so most people won’t even notice.

This board’s concentration on gaming means that it performed well in the 3D Mark Fire Strike benchmark. Its score of 6827 is towards the top of the table when it comes to Intel motherboards, and it’s only 17 points behind the top-scoring product – and that kind of slim margin won’t be noticeable in games.

The Aorus was more ordinary in other tests. Its multi-core Geekbench 4 score of 19,988 is good, but its 5761 result in the single-core test is middling – and its CrystalDiskMark results of 505MB/s and 496MB/s are similarly underwhelming.

It’s a power-hungry slab of PCB, too. Its idle power requirement of 56W is the highest I’ve measured from this recent crop of Intel boards, and its peak of 102W is also on the high side.

Should I Buy the Gigabyte Aorus GA-Z270X-Gaming 5?

The Gigabyte matched other gaming motherboards in the Fire Strike benchmark, and it bolstered that solid performance with a solid range of features. It beats most other boards for multi-GPU support, and it gets the basics right elsewhere, with good audio and networking options alongside plenty of ports and RGB LEDs.

It doesn’t have power or reset buttons and the layout can be a little cramped, but these are the only minor concerns.

The £163/$209 price means this board undercuts many other gaming products will still offering good performance and plenty of useful features – without some of the gimmicks that can be found elsewhere. It’s an excellent choice for any kind of gaming machine.

Gigabyte’s Aorus-branded board has a bevy of high-end features that will appeal especially to gamers, and its benchmark results indicate that this is where it’s strongest when it comes to performance. The £163 price plants it firmly in the mid-range, too, so it’s an excellent choice for all sorts of full-size gaming rigs.