The Gigabyte Aorus 15G is an expensive gaming laptop, featuring a powerful performance, high refresh rate and a mechanical keyboard to please the hardcore gaming crowd. On the flip side, the lack of 4K support means you’ll be stuck with a rather outdated resolution moving forward without a secondary display, but I personally found the excellent 240Hz display to be a worthwhile compromise in the end as someone with a love for high-performance over picture quality.

The Gigabyte Aorus 15G is a powerful laptop that excels at Full HD gaming with superb specs and a high refresh rate. It’s the mechanical keyboard that stands out most however, with the Aorus 15G being one of the few portables of this size to feature one.

Its relatively chunky design is rather pedestrian and certainly not the most attractive, but the Intel 10th Gen and Nvidia RTX innards of this beast make it a very tempting proposition for ‘hardcore’ gamers. With such a wonderful performance across the majority of games on maximum settings, gaming in Full HD rarely looks better.

A few small design issues aside, this is a great gaming laptop worth considering for those willing to break the bank, or simply prefer something more convenient compared to your average gaming rig. You’ll just need to handle a few strange choices with the Aorus 15G, which is a bitter pill to swallow given the £1700 starting price.

The Aorus 15G isn’t exactly a looker. Its chassis is dominated by a bland grey colour scheme and the RGB lighting across its mechanical keyboard is subtle enough that it doesn’t really have a massive impact on the overall visual identity. But the majority of its materials are undeniably premium.

The vents are spacious, while the back is decorated by a gorgeous fluorescent logo that shines once the laptop is opened up. It’s clear the ventilation placement is going for some form of aesthetic, perhaps akin to an old school motorsport engine, but to me it just seems a little gaudy compared to other, more picturesque gaming laptops on the market. 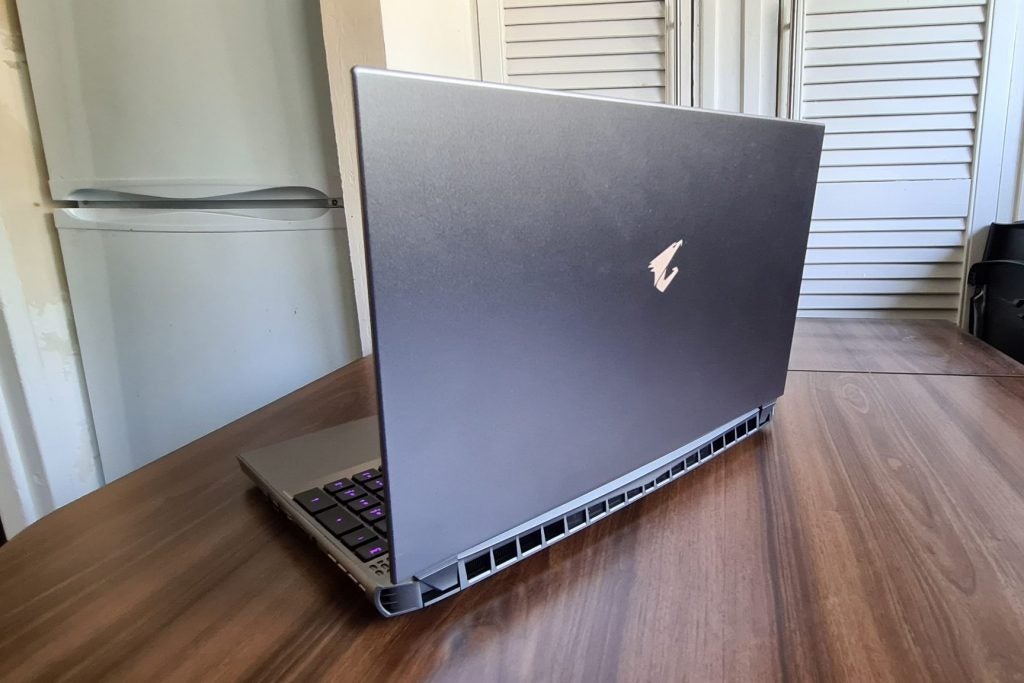 Those hoping for a more catching aesthetic for their gaming station will be disappointed here, but I’d prefer a laptop which prioritises power and portability over a striking design, which is exactly what the Aorus 15G delivers in spades. Across the laptop you’ll find 3x USB 3.0 ports, 1 HDMI port, 1 USB-C, a mini-display port and even an SD card reader for those who might want to import documents from a phone, camera or tablet.

Finally, you’ll find a headphone jack and ethernet cable, closing off a rather complete selection of ports. Unfortunately, there’s no standard display port, so you’ll likely need a converter for using select VR headsets such as the Oculus Rift S. Beyond this, I’ve honestly got no complaints, and was pleased with the generosity provided by the Aorus 15G when it came for ports to accommodate all of my needs both professional or otherwise. 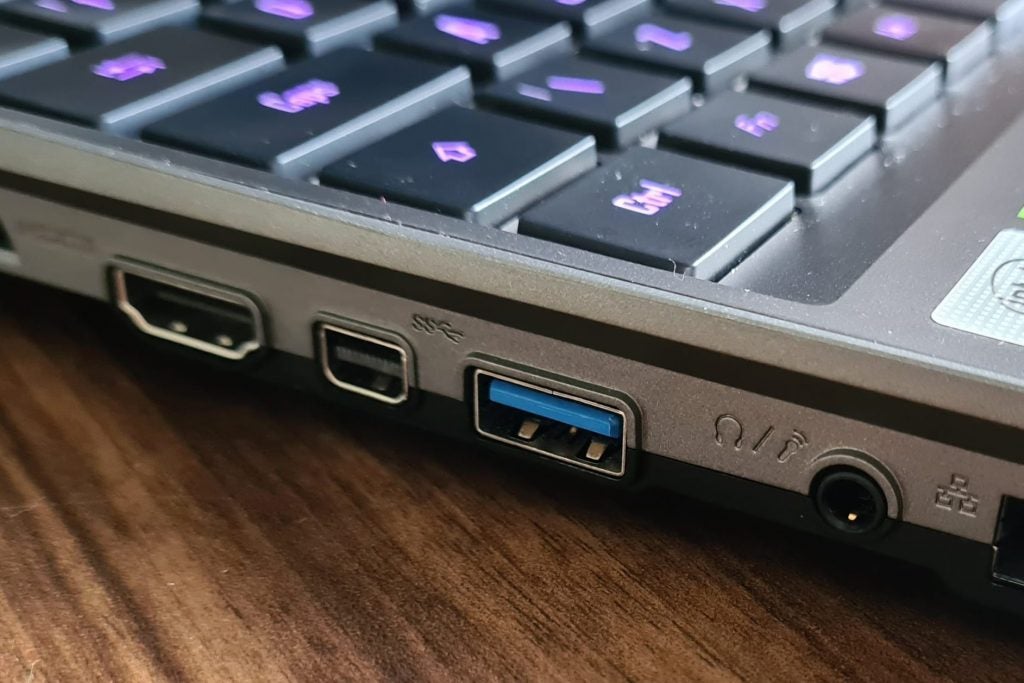 You can find a webcam located directly underneath the screen, hidden by a small plastic window which reveals a small, unassuming hole I wouldn’t blame you for missing altogether.

It’s a passable webcam at best, which might explain why it’s so inconspicuous amidst the overall design. I’d use this for basic video calls and not much else, since it doesn’t possess the level of visual clarity required for professional streamers and conferences. 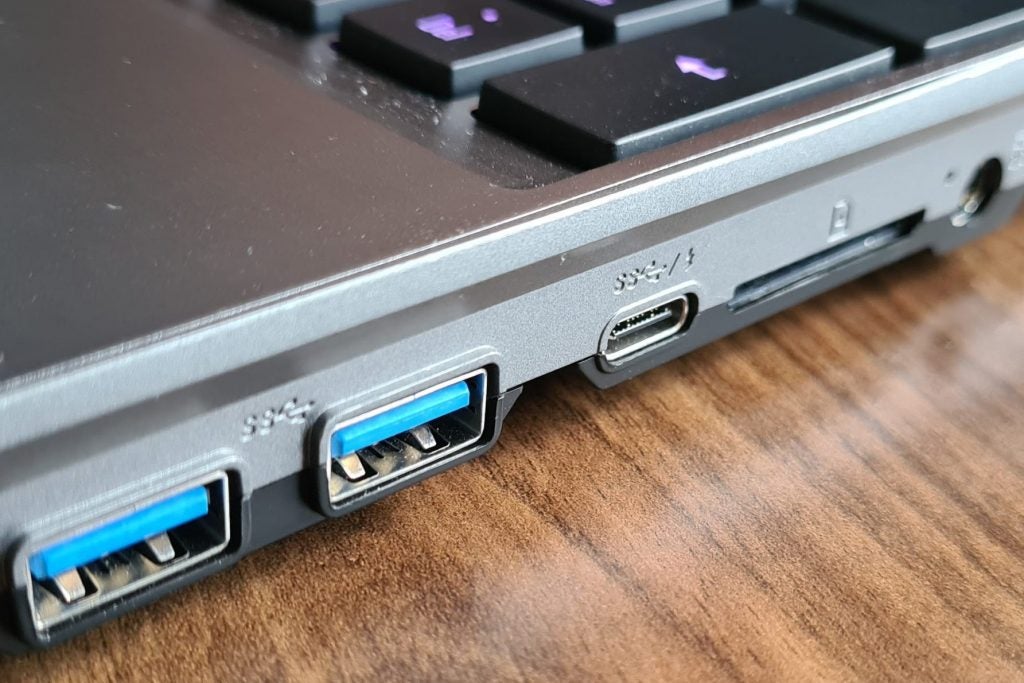 While I’ll explore the display  in greater detail later on in this review, I do want to touch upon the surprisingly flimsy build quality of the panel itself. It feels fragile, and expresses a noticeable wobble if the laptop itself isn’t secured on a table or similarly level surface. I also noticed visual artefacts on the screen itself when titling it backwards and forwards.

It’s a small blemish that doesn’t impact the overall experience, but considering the asking price, I’d expect such flaws to be minimal or entirely nonexistent. Meanwhile, this aluminium monster weighs in at 2.2kg, so it’s a beefy bit of equipment, but not something you can’t pop in a backpack or messenger pack for university or office use.

The Aorus 15G packs a surprise in the form of an excellent mechanical keyboard, which you usually don’t find in laptops this small. The mechanical keys are great for extended sessions of gaming, writing and editing. This is largely thanks to switches from Japanese company Omron who have provided the keyboard with a loud, satisfying click akin to dedicated gaming keyboards you’d buy from major outlets such as Razer and Logitech.

I immediately noticed that these keys are raised up incredibly high, allowing for precise execution and an extra sense of tactile depth. With 2.3mm of travel, I found typing to be fast and accurate once I’d accustomed myself to the layout. You’ll also notice the Aorus 15G supports the full suite of F1 through F12 keys alongside a number pad, which are oftentimes shortened with laptops. 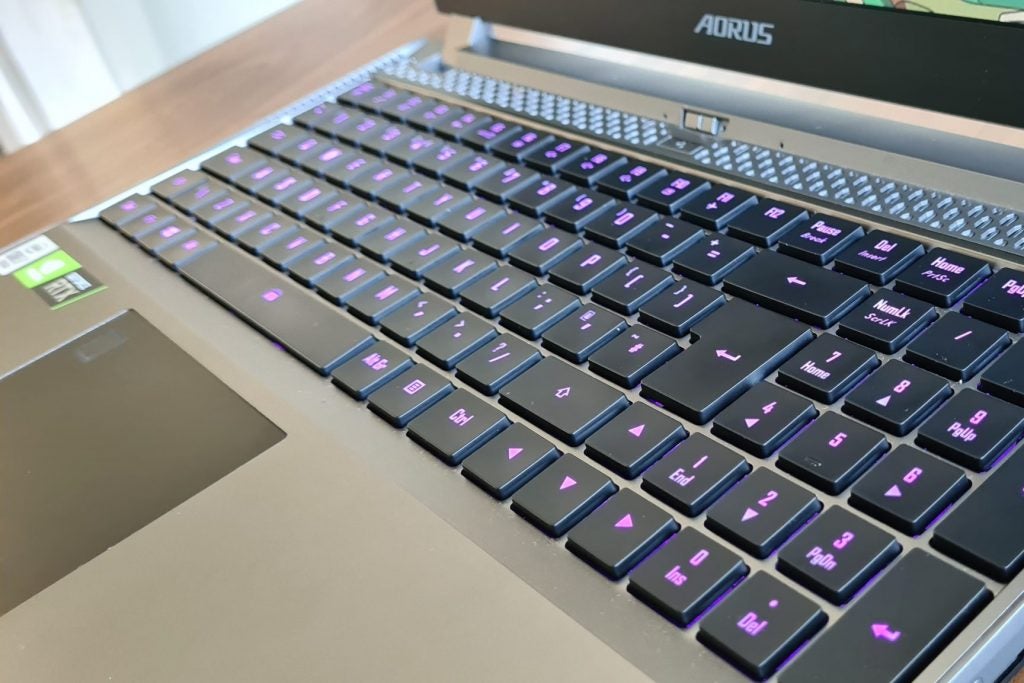 While the chassis is lacking in RGB lighting, this is remedied somewhat with the keyboard. You can outfit each and every key with an assortment of gorgeous lights with the Aorus Command Centre. This piece of software comes pre-installed, and you can assign a specific colour to the keyboard alongside animations that let them breath, pulse or remain entirely static. It’s a cool bonus, and improves upon the stale yet competent aluminium design.

The trackpad is perfectly fine, although I find it to be finicky when wanting to highlight text and perform other specific tasks, and you’ll definitely want to attach a more capable mouse for certain games. I did enjoy the fingerprint scanner, which can be used to sign into the laptop without a pin or password. I doubt everyone will bother using it, but having it there is a cool addition nonetheless, and considerably more secure.

There’s no 4K model of the Aorus 15G, but this is very much a laptop aimed at those who prioritise performance, with the very impressive Full HD 15.6-inch screen sporting a 240Hz refresh rate and all the technological innards to ensure the majority of games will take advantage of this milestone. If you’re after rock solid frame rates for competitive gaming, this Gigabyte laptop fits the bill. 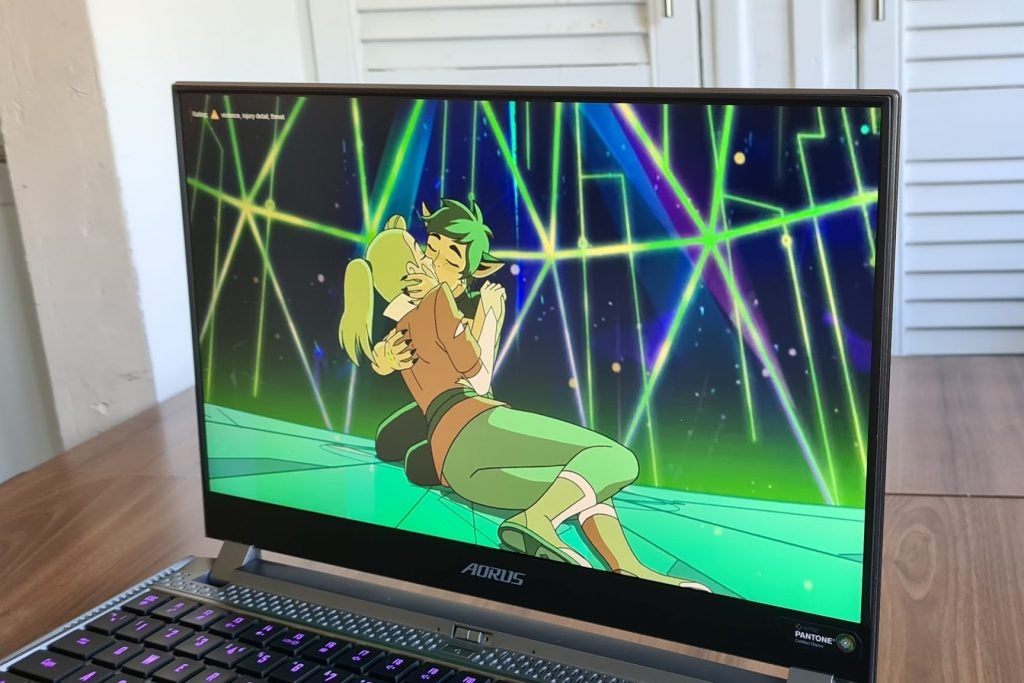 Even when playing relatively demanding games such as Death Stranding and Shadow of the Tomb Raider, it provided a punchy and colourful picture I’d honestly struggle to level any serious complaints at. I’d argue such a small design lacks the real estate to truly take advantage of 4K anyway, so I’d much rather the increased headroom for performance at 1080p, which the Aorus 15G delivers with no problem at all.

Some colours can appear notably warm and over saturated at times, but the overall colour presentation is nothing to be sniffed at. This is a lovely panel, and the slender bezel surrounding the display means it both looks and feels premium as a result. This makes the unusual build quality issues I mentioned earlier all the more jarring, although it’s far from a deal breaker.

The Aorus 15G is available in two distinct configurations, both of which are extremely powerful in the modern computing landscape. The one I’m reviewing has an RTX 2070 Super alongside an Intel i7-10875H. Such high-end specifications are more than powerful enough for Full HD gaming, but if you’re willing to pay a little extra you can upgrade to a 2080 Super and Intel i9 processor combo.

There’s further skews out there, although given the 1080p display, anything above the 2070 Super might be considered overkill. Prices begin at £1699 and plateau at £2899, with my review model costing a modest £2000. For the most part, you’re getting what you pay for, with the Aorus 15G blasting through the majority of benchmarks and standing proudly alongside the competition.

However, as the benchmark results show, the Aorus 15G isn’t that much more powerful than rivals such as the HP Omen 15 (2020) and Asus ROG Zephyrus G14, despite costing a few hundred quid more. You are of course getting a mechanical keyboard as an added bonus to justify the price jump.

Given the 1080p resolution, the RTX 2070 Super was able to handle all of the games I threw at it on maximum settings, and this included modern releases such as Half-Life: Alyx and Death Stranding with DLSS 2.0 enabled. This is a machine that should easily stand the test of time leading into the next-generation of games, and shouldn’t struggle with bigger hitters like Cyberpunk 2077.

Catch a glimpse at our performance benchmarks below, all of which were recorded at maximum settings. The Aorus 15G swept through all of the benchmarks with ease. It’s also capable of maintaining a number of applications and tasks outside of playing games at any given time. So, if you’re looking for a machine powerful enough to manage multitasking, this is one that passes most tests with flying colours.

The chassis does become warm during extended play sessions and the fans are rather loud, but the temperature never exceeds an unmanageable amount. If you’ve used similar laptops or even a current-gen console, the situation here is rather similar.

As for the drive, the Aorus 15G has a 512GB SSD which is supremely fast with read and write speeds of 3347.52MB/s and 2924.88MB/s respectively. Games and applications are a breeze to launch, and installing them is equally speedy. Unfortunately, the drive fills up quickly if you’re hoping to store more than a handful of games alongside photos, videos and other programmes. It’s a real shame you don’t get 1TB storage considering the high price.

Gaming laptops have never been hailed for their battery life, often requiring a constant charge if you’re hoping to establish it as your primary machine. While it isn’t extraordinary by any means, my testing saw the Aorus 15G emerge with a battery life of 4 hours and 27 minutes using a PC Mark 10 benchmark.

This was while performing a number of high-energy tasks inside a typical work environment, so I expect the average charge will be somewhat diminished when playing demanding games, so you’ll likely want to keep the charger nearby.

But like many gaming laptops, the Aorus 15G isn’t seen as a predominantly portable machine, it’s a main driver, whether you’re playing on the unit itself or hooking it up to a larger display. In this context, and in comparison to other machines on the market, such battery life is pretty decent. 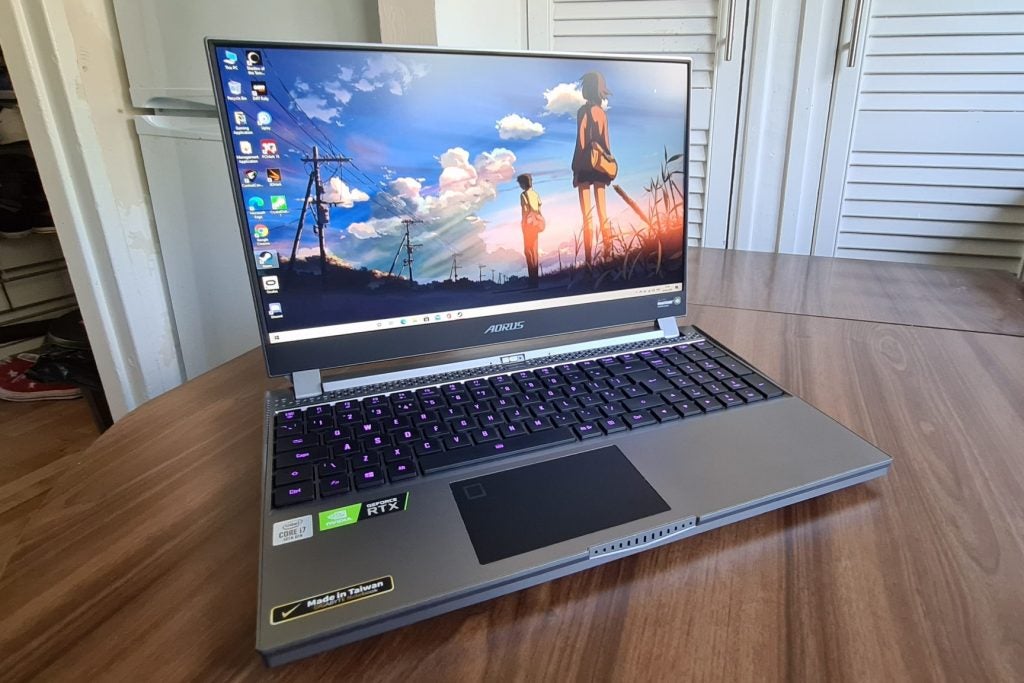 Should you buy the Gigabyte Aorus 15G?

The Gigabyte Aorus 15G is an expensive gaming laptop, possessing a number of skews which accommodate both casual consumers and hardcore gamers hoping for a device which will see them through the next several years of big gaming releases. In that regard, those with deep pockets won’t be disappointed.

Not only does this laptop offer one of the best Full HD performances around, but also features a superb mechanical keyboard which is rare for a portable this small. This feature comes at a cost though, making the Aorus 15G a few hundred quid more expensive than the HP Omen 15 (2020) and ROG Zephyrus G14.

The lack of 4K support also means you’ll be stuck with a rather outdated resolution moving forward without a secondary display, but the excellent 240Hz display is a worthwhile compromise for those who prioritise high-performance over image quality.

Combine this with a solid (albeit hefty) aluminium chassis and you’ve got a compelling gaming laptop well worth considering. My only major complaint is the flimsy display, which is a glaring issue that left me paranoid I was going to damage the Aorus 15GB by accident.