The Gigabyte Aero 17 HDR tries to be all things to all people. It promises the CPU power to sate content creators alongside the graphical grunt to slice through the latest games.

On paper, it certainly has the ability: this is the first laptop I’ve seen to combine an Intel 10th-Gen CPU with an RTX 2070 Super graphics core.

The Gigabyte Aero 17 HDR is made from a dark, matte aluminium, with a smart triangle-patterned grille above the keyboard and neat air vents around most of its sides. It’s subdued and professional; it’s only on the keyboard that you’ll find any RGB LEDs.

No matter how smart it looks, however, issues remain. Build quality, for one: there’s too much movement in the wrist-rest, and there’s a little desktop distortion when the rear of the screen is pressed. The Aero isn’t weak, but a protective sleeve would be a wise investment.

In addition, the machine’s edges are a little sharp, and the visible seams around the body are unattractive. 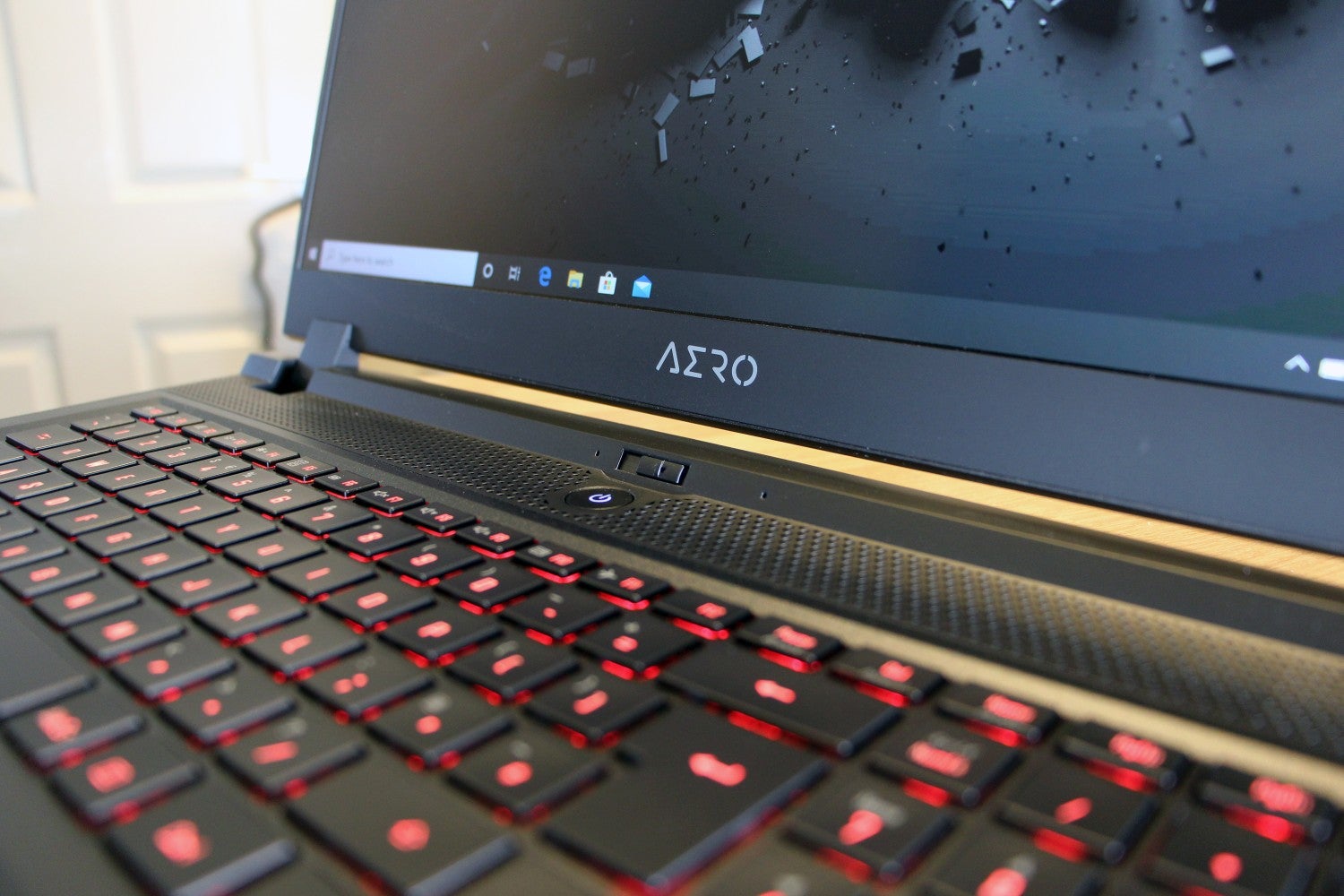 However, the Aero’s 2.5kg weight and 21.4mm thickness are impressive for a 17.3in machine. Connectivity is decent too: the machine comes with three USB 3.2 ports, a Thunderbolt/USB Type-C connection and both HDMI and mini-DisplayPort alongside audio jacks and a card reader.

The laptop has a webcam, although I’m disappointed that the camera has been positioned below the screen – it’s only good for seeing up people’s noses.

On the inside,  the Aero has dual-band Wi-Fi 6 and Gigabit Ethernet, both provided by gaming brand Killer.

An IR-capable webcam and 2.5Gbps Ethernet would have been welcome, alongside more than one Thunderbolt port. 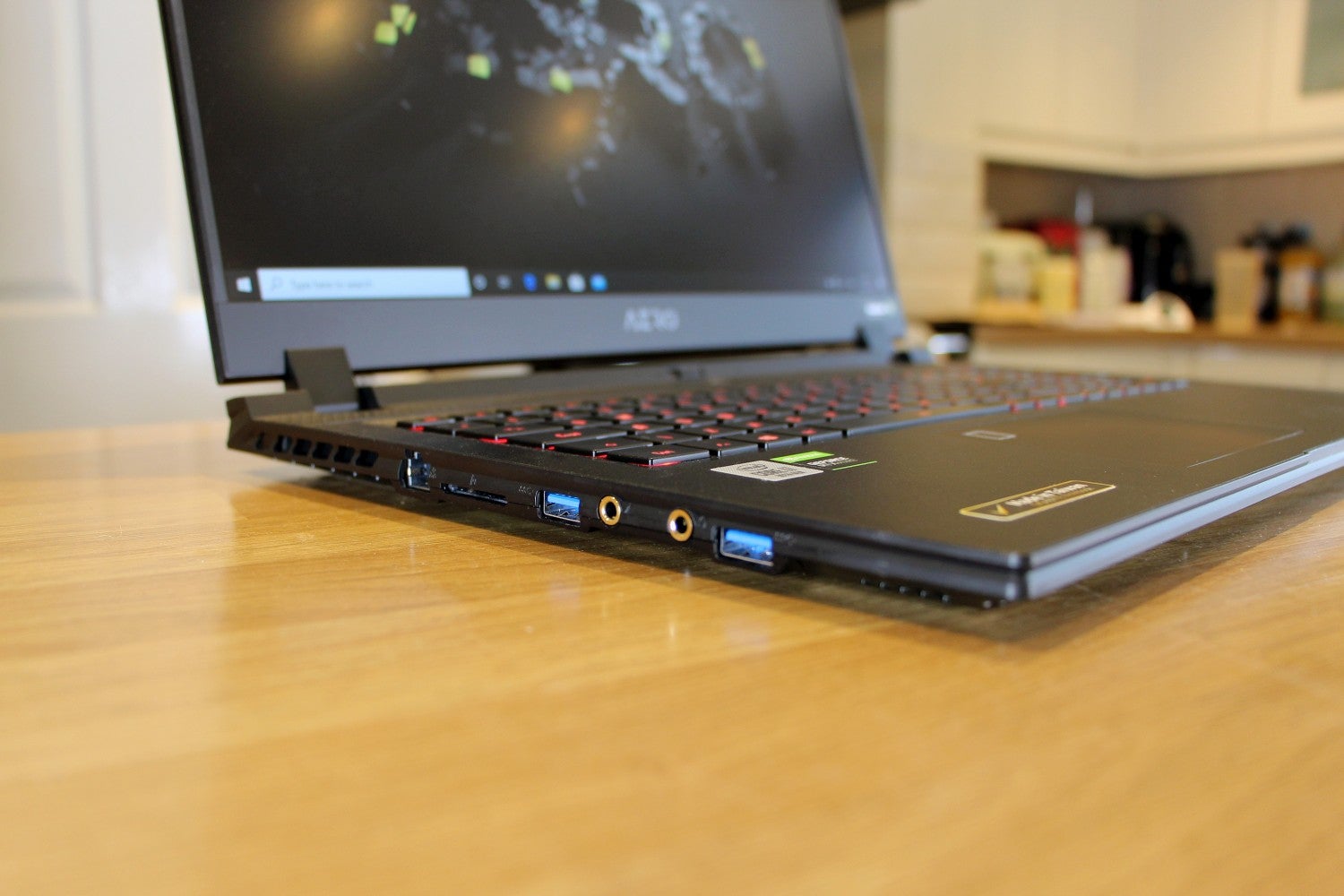 Despite this, the Aero is still better than rivals: the Razer Blade 15 Studio Edition offers similar external connectivity but no Wi-Fi 6; the MacBook Pro 16 features Thunderbolt ports but not much else.

Those rivals systems are better in other areas, though: both are more compact, slimmer, lighter and better looking.

The Aero’s keyboard benefits from a good layout: it has large keys, a full-sized numberpad and numerous function row options.

It offers decent quality levels too. The keys are quiet, consistent and comfortable, presenting reasonable travel; a soft, fast typing action makes it easy to type for hours. 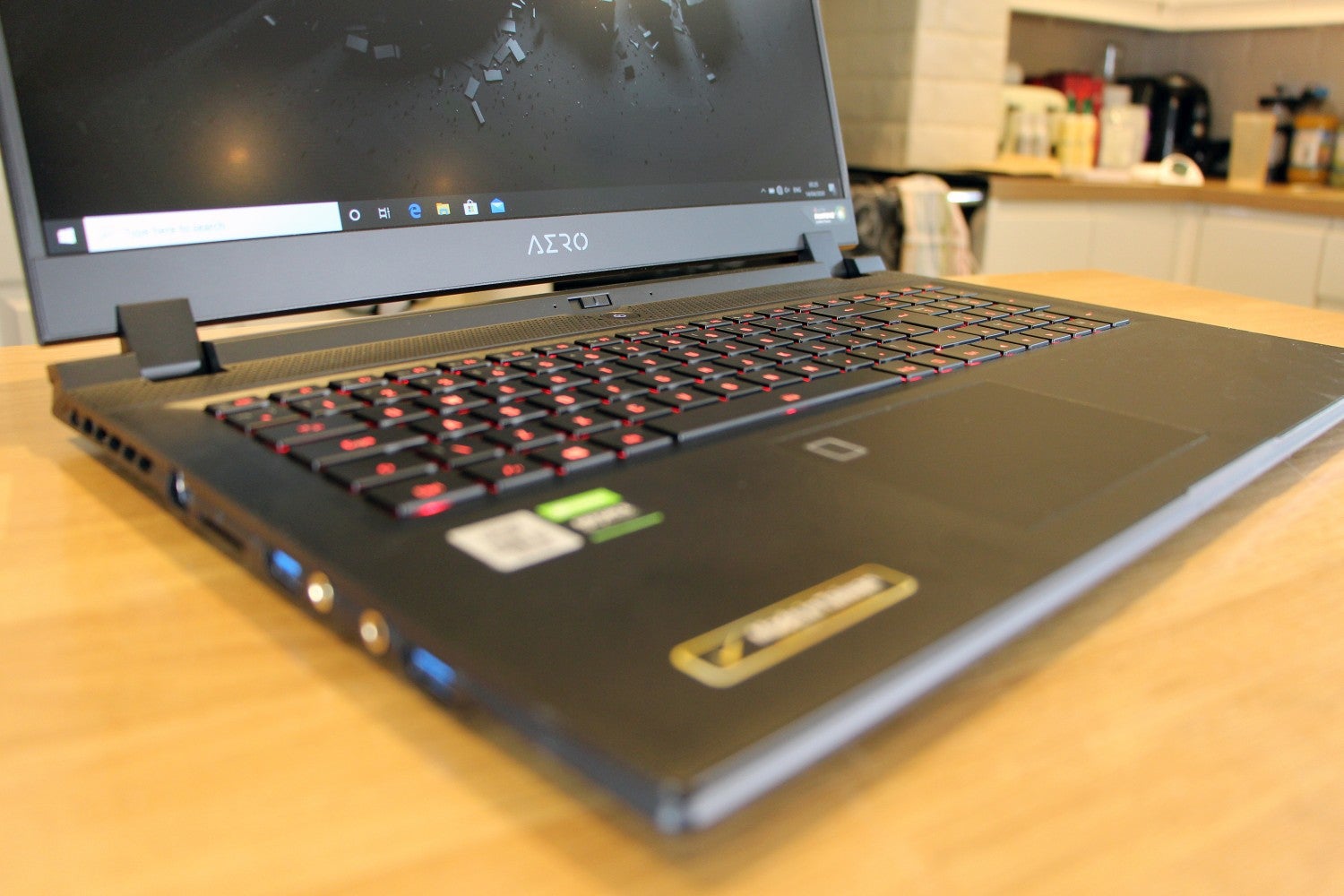 The only slight keyboard issue is subjective: many people will prefer crisper, more tactile keys.

The trackpad is good, with a smooth, accurate surface with a built-in fingerprint reader. The buttons are decent: crisp, and easily good enough for fast-paced work.

The 17.3-inch panel provides a generous space for working, whether you’re wanting to see crisp detail, watch 4K media or use several tools simultaneously. The screen is calibrated and certified by X-Rite Pantone.

Those figures mean that the Aero is capable of producing accurate colours in the sRGB and Adobe RGB gamuts. As such, you can work confidently in either space. That DCI-P3 figure is good enough for HDR work too. 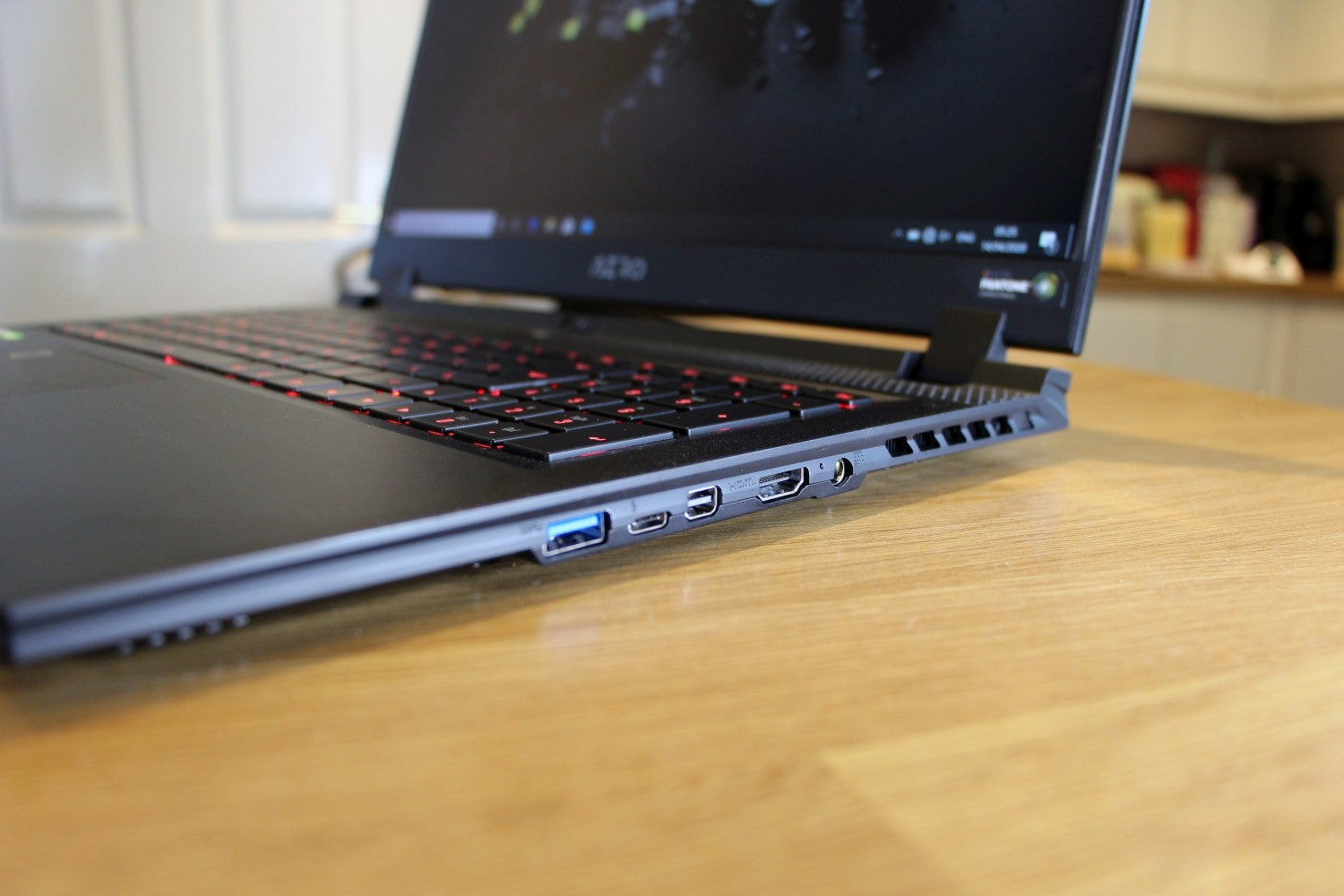 The Aero’s colour temperature of 6117K is slightly wayward, but this isn’t a significant concern.

The brightness level of 541 nits is considerable, and the black measurement of 0.39 nits is decent. The resulting contrast ratio of 1387:1 is superb – it creates huge vibrancy and bold colours. It’s just a shame the black level isn’t better; it would have meant more depth.

Uniformity across the panel is excellent: the brightness only deviated by a maximum of 7%, which is twice as good as most laptops.

For work this screen is exceptional, but it’s only mediocre in other scenarios. The panel adheres to DisplayHDR 400 and it’s bright enough, but the black level and contrast ratio aren’t good enough to deliver more than a minor boost to HDR content. However, this is true of all HDR-capable laptops right now, and the Aero is better than most. 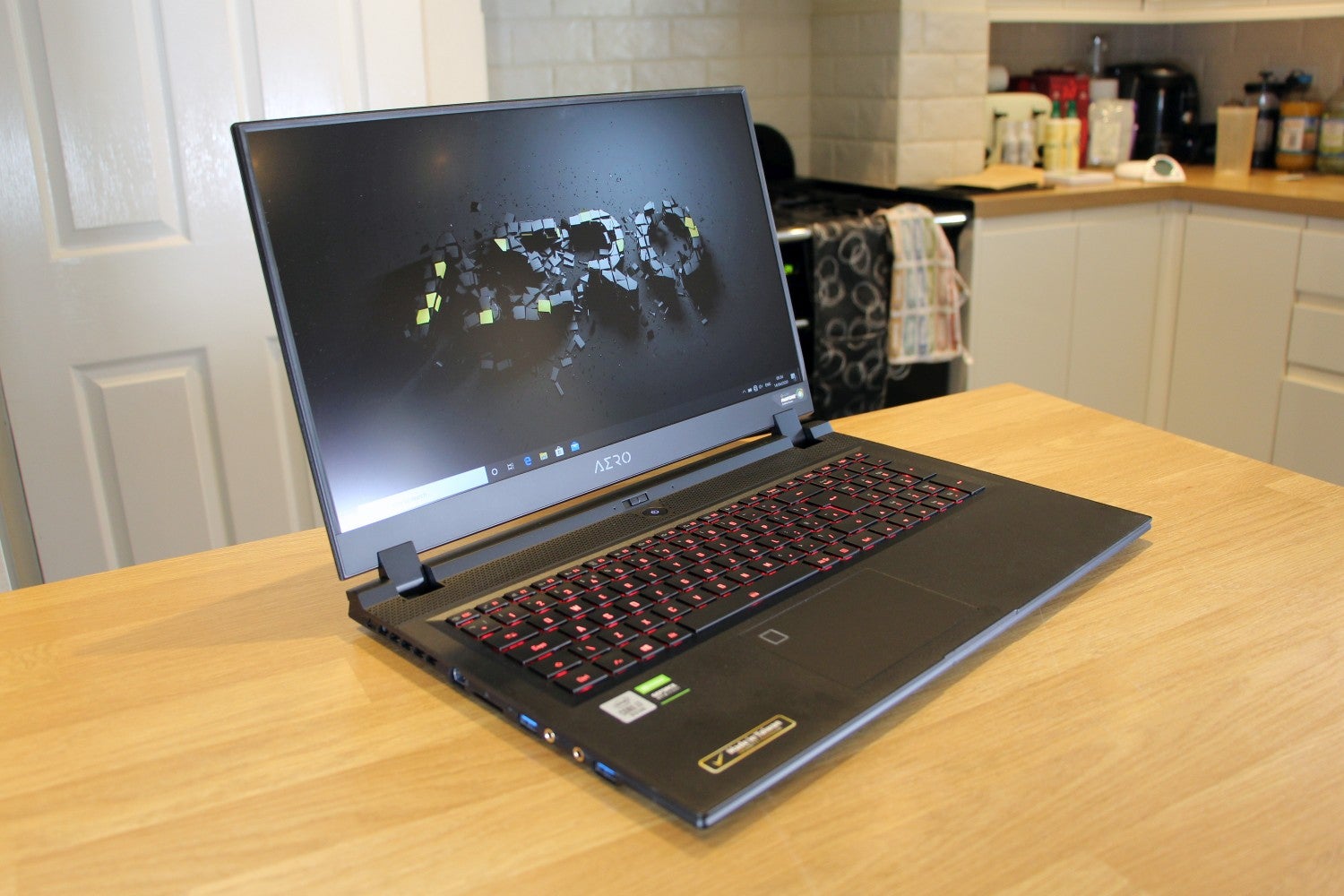 This screen is only good enough for certain gaming genres: the 60Hz refresh rate and lack of syncing are fine for most situations, but fast-paced titles or eSports games require more speed.

The speakers are loud and offer reasonable clarity, but they’re tinny and lack bass. They’re serviceable, but nothing more.

The Intel Core i7-10875H uses the new Comet Lake architecture. This chip is a replacement for the i7-9750H, which has been at the heart of the majority of work and gaming laptops over the past year, including the Razer and MacBook.

Those specifications also compare well to the new AMD Ryzen 9 4900HS – a CPU that also has eight cores, but its clock speeds sit at 2.9GHz and 4.2GHz.

I have no complaints about the new silicon. In Geekbench 5’s single- and multi-core tests, the Aero scored 1337 and 7100 points – comfortably ahead of the 9th-Gen CPU. In PCMark 10, the Gigabyte scored 5365 points; this is slightly behind the AMD part and around 1000 points better than the outgoing Intel chip.

The new, fast CPU is joined by a Samsung SSD capable of delivering read and write speeds of 3513MB/s and 2987MB/s – which is an exceptional pace. The specification is rounded off by a solid 16GB of memory.

This CPU will blast through any work task, from tough content creation to tricky database and CAD tasks. It’s far better than its predecessor, matches the AMD part, and will handle any app short of workstation-level software.

Any graphical work task will be swatted aside by this GPU. When it comes to gaming, you can run any game at 1080p – even at Ultra settings, its frame rates regularly topped 100fps. This panel will run mainstream games at 4K, although you’ll have to dial back graphics settings to achieve totally smooth performance in the toughest titles.

Don’t assume this is the best GPU you can get for this money, however. For this cash, or only a little more, you can find laptops with a full-power RTX 2080 Super.

When it comes to thermal performance, the Aero is mixed. On the inside, temperatures were fine: the CPU and GPU peaked at 88ºC and 73ºC. The speeds on offer were good – even when running hard benchmarks, the CPU peaked at 4.9GHz, so it virtually matches its theoretical peak speed. 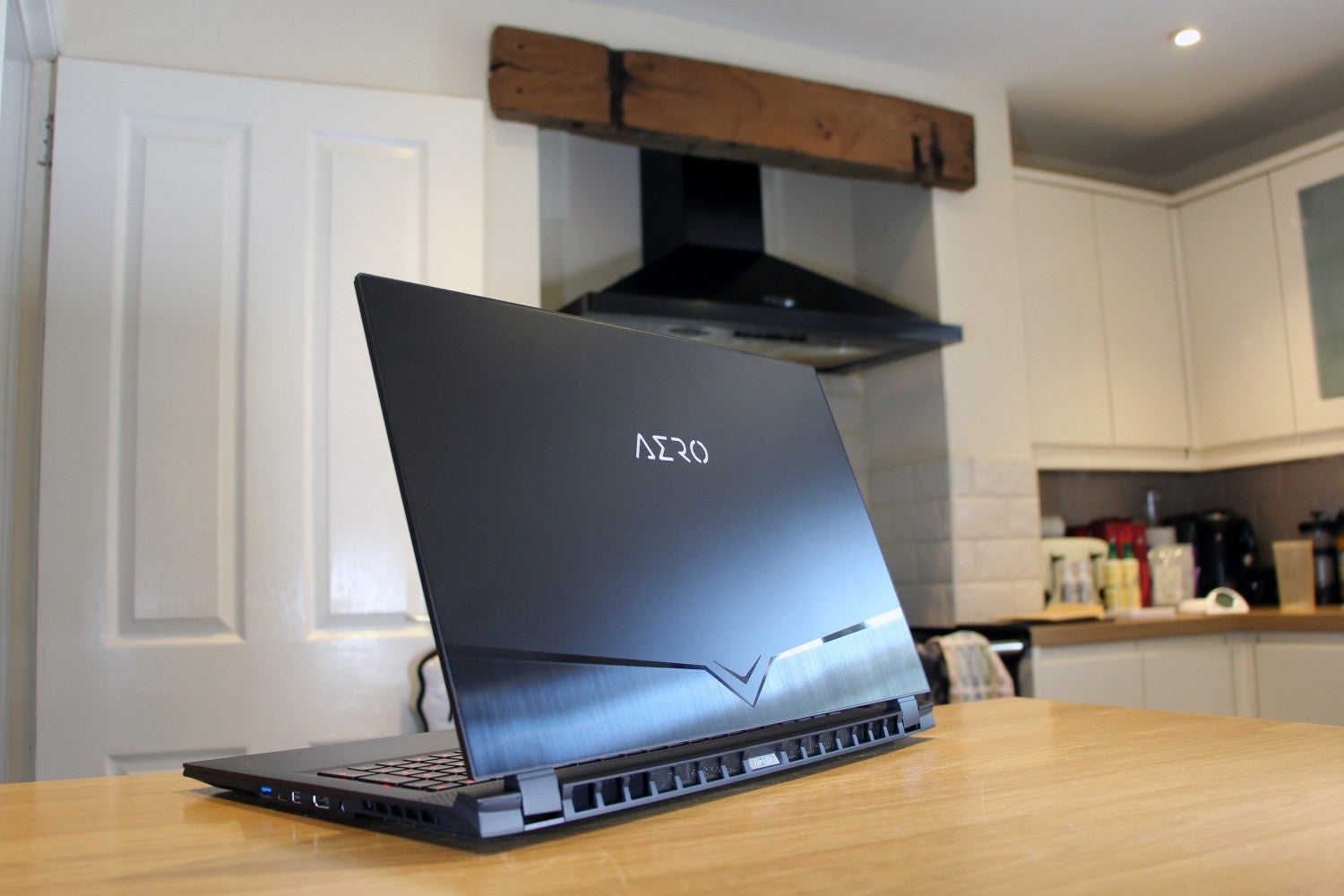 However, during benchmarks the area above the keyboard became very hot and the base panel, too, was toasty.

If you’re running mainstream gaming or work tasks on a laptop of this size then you’re likely sitting at a desk – so the external temperatures are unlikely to be an issue. However, they’re still worth remembering if you’re really going to push the hardware.

The Gigabyte Aero 17 noise levels are fine; they’re consistent, no worse than rivals and relatively easy to mask with a headset.

However, the Aero’s battery life is only average. With the 4K display at full brightness the laptop lasted for one minute shy of four hours in our standard test. That figure improved to just over seven hours with the display’s brightness reduced to 50% – which is still bright enough for most work purposes. If you really push the hardware then expect to lose an hour from both of those results.

Such times are awful; they’re better than any high-end gaming laptop, and good enough to handle a commute or half a day away from the mains. However, the Razer and MacBook are better.

Should you buy the Gigabyte Aero 17 HDR?

The new Intel 10th-Gen CPU that features in the Gigabyte Aero 17 HDR is sensationally quick, delivering a solid improvement over its predecessor and AMD’s latest arrival. The GPU will handle almost anything here, and the rest of the laptop’s specification is excellent too.

The screen is fantastic for work, and elsewhere the Aero offers good ergonomics and connectivity. Its form also impresses, with a svelte build that isn’t weighty.

There are downsides, however. Battery life is fine, but bettered by rivals that are also smaller, slimmer and more stylish. The 60Hz screen isn’t great for gaming or for HDR-based work. If you want graphics power, it’s also possible to find greater GPU grunt at similar prices elsewhere.

As such, the Aero doesn’t quite sate every scenario – and it’s hardly cheap. Nevertheless, the Gigabyte Aero 17 HDR offers exceptional power and design for work tasks. If you need a high-end, big-screen productivity portable then this is a fantastic option.