Equipped with a quad-core Intel Core i7-6700HQ from the Skylake generation, in the processing department this is a powerful piece of kit.

The 6700HQ comes with Hyper-Threading, which allows processor-intensive applications to make better use of the four cores, effectively turning them into eight threads. This helps in tasks such as video rendering and photo processing, as does the generous 16GB of 2,133MHz RAM (upgradable up to 32GB).

This performance shone through in the Geekbench 4 benchmark, in which the Aero 14 scored 4,229 and 12,903 in the single-core and multi-core tests respectively.

Despite having the same processor as the 15-inch MacBook Pro and the Skylake-powered Razer Blade, the Aero beat both of them by a narrow margin.

This model gets a blazing fast 512GB PCIe SSD that topped out at 1,790MB/s read speeds in the CrystalDiskMark benchmark. A mix of capacity and speed makes this the ideal storage drive for this laptop. 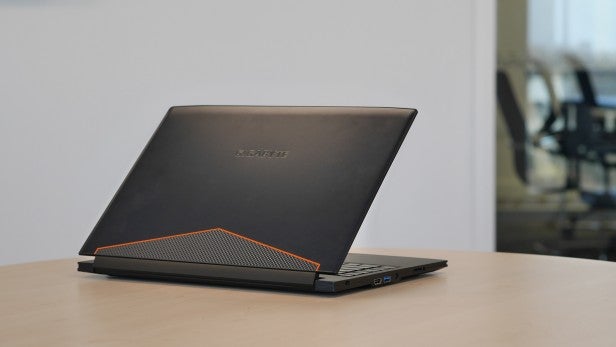 The Nvidia GeForce GTX 1060 graphics card on board the Aero is close to identical to its desktop sibling, and performs similarly as well. Loaded with 6GB of GDDR5 memory, this chip is capable of powering the latest games at Full HD resolution at High settings without breaking too much of a sweat.

The Aero 14 put in a similar performance to the Razer Blade, beating it in the Rise of the Tomb Raider benchmark with an average frame rate of 68.9fps at the highest graphical settings with FXAA switched on, and it managed 90.8fps in Middle-earth: Shadow of Mordor. Whether you want to up the resolution to the screen’s native 1440p will be down to personal taste, but I found the extra performance from Full HD was worth it over the slightly higher fidelity but lower frame rates of a higher resolution.

That’s the long way of saying that this is a powerful machine, especially considering its sub-2kg weight. You’ll get similar performance from other compact gaming machines such as the MSI GS43 VR, which weighs in at just 1.6kg, but that machine is hot, loud and has a smaller battery.

As you’d expect, the only area of potential complaint for some people will be fan noise. At full pelt the fans are pretty loud, although not as bad as some high-spec, thin and light Aorus machines. The Aero 14 is about equal with the Razer Blade in this respect, and the speakers are more than loud enough to drown it out.

There’s a very slight whine when idling, but it’s audible only in a dead silent room. The fans don’t kick up any fuss until you push the PC hard, which is great news. 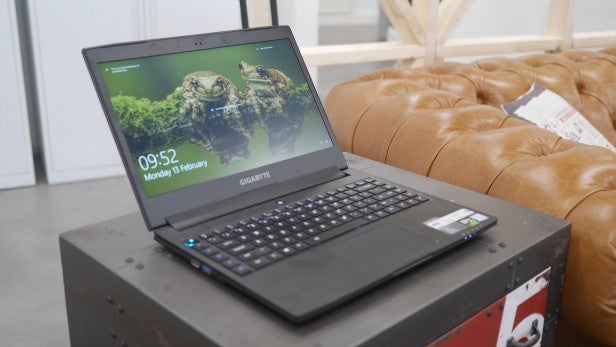 Heat-wise, the bottom of the Aero does become fairly toasty when gaming, which isn’t surprising. I’d suggest gaming with it on some sort of lap tray to help with airflow – and to keep your knees cool.

I measured peak CPU temperatures during the Tomb Raider benchmark at 80°C and GPU temperatures of 74°C. These are within safe limits, although my testing was conducted in a room with an ambient temperature of around 18oC; warmer homes will see higher internal temperatures, especially during long gaming sessions where the CPU and GPU actually affect room temperature.

The Aero 14 is now available with the latest 7th-gen “Kaby Lake” processors and slightly faster 2,400MHz memory for around £100 more. While I haven’t tested this model, Kaby Lake will generally offer higher clock speeds and the faster memory will also help things along. As I haven’t seen one, I can’t say how, if at all, this more powerful processor will affect fan noise.

The ace up the Aero 14’s sleeve is battery life. Despite being relatively thin, light and monstrously powerful, Gigabyte has packed a huge 94Wh battery into the chassis. It’s very much a brute-force way of solving battery life problems – but it has absolutely worked. 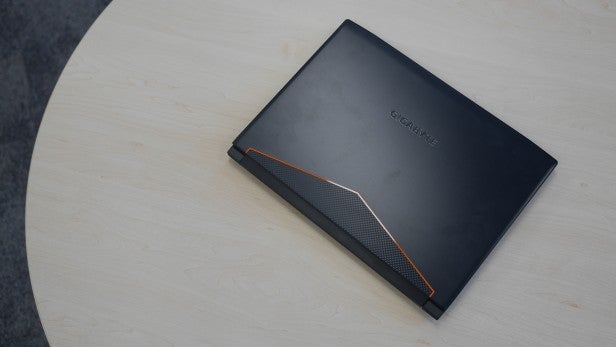 The laptop managed 8hrs 20mins in our very light Powermark battery benchmark, and in regular use I found I could get between six and seven hours.

An hour of Netflix viewing consumed 14% of its capacity, pointing to a little over seven hours of non-stop streaming. If you edit photos and videos on this device, expect substantially less; and you’ll manage a couple of hours of gaming away from a wall socket.

Should I buy the Gigabyte Aero 14?

The Gigabyte Aero 14 is a seriously impressive piece of kit. It lacks the premium build of some of its rivals – including the MSI GS43 VR and Razer Blade – but it makes up for that with great performance, an excellent screen and class-leading battery life. All in a package that weighs less than 2kg.

Related: Best Laptops For All Budgets

For many gamers, the Aero is the ultimate on-the-go laptop. There’s very little not to like considering the price; it’s well worth your cash.

A thin and light gaming laptop that doesn’t cost the earth – that’s worth celebrating.