The Gigabyte AB350-Gaming offers decent gaming performance, but it's underwhelming in all other areas. Only worth a look if you're building a gaming system on a tight budget.

What is the Gigabyte AB350-Gaming?

The Gigabyte AB350-Gaming is the second-cheapest board in our recent AMD AM4 motherboard test group, and its £83 price means it’s only £8 pricier than the MSI B350 PC Mate.

That puts these two budget boards on a collision course. The Gigabyte product takes aim at gaming, while its rival MSI is an all-rounder – but can either succeed on such a tiny budget? 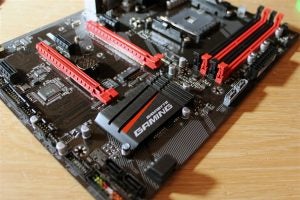 The Gigabyte’s specification is understandably cut back, but the hardware on offer here is still good enough to build a powerful mainstream rig for work or play.

Alongside the Ryzen 2-ready AM4 socket, you get four memory slots that can handle 64GB of DDR4 clocked to 3200MHz. That memory speed is slower than every other mainstream board – they tend to run at 3466MHz or 3600MHz on the AMD side of the fence – but it’s still entirely adequate for mainstream machines where RAM never tends to go above that pace.

The Gigabyte supports AMD CrossFire rather than Nvidia SLI, but its dual-graphics abilities are a moot point: the top PCI-E x16 slot runs at its full speed, but the second slot runs at just x4 speed, which isn’t fast enough to support a second graphics card.

Still, that second PCI-E x16 slot does have the bandwidth for other expansion cards, and the Gigabyte does serve up a trio of PCI-E x16 sockets for other hardware additions.

The Gigabyte’s sole M.2 connector offers up the full bandwidth of its NVMe connection – so no M.2 SSDs will be bottlenecked – and the Gigabyte has six SATA ports, although only two of them are handily installed perpendicular to the board. 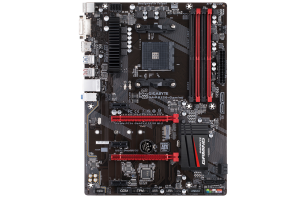 The MSI B350 PC Mate offers similar memory support and it has one full-speed M.2 connector. However, it’s also similarly hampered by a second PCI-E slot that only runs at x4 speed.

Elsewhere, the B350 doesn’t support AMD StoreMI – a smart SSD caching technology. However, most people won’t be using that feature; and in every other respect the two chipsets are identical.

The rest of the Gigabyte’s specification is fine, but basic. There’s only one internal USB 3.1 connector, and there are only four fan connectors rather than the five or six included on pricier products.

There’s basic Gigabit Ethernet, and a Realtek ALC887 audio chipset, which is fine for most tasks, but a step behind the ALC1220 or S1220 included on more expensive motherboards. MSI’s board goes one step better, at least, with Realtek ALC892.

At the rear you get six USB 3.1 connectors, but no Type-C, something that the cheaper MSI board does include. The Gigabyte only has three audio jacks, which is half as many as its rival, and no I/O shroud either.

The Gigabyte isn’t exactly an eye-catching board, but this isn’t really a consideration at this price. There’s no lighting here, and the two heatsinks are modest, with small metal slats and minimal aesthetic design. A red and black theme is used across the board.

Gigabyte’s budget board is geared up for gaming, so it’s no surprise that this is where its performance excelled.

Its 3DMark: Time Spy and Fire Strike results of 4121 and 10,929 are mid-table in the wider context of this AMD AM4 group, but both are better than the MSI B350 PC Mate – that board had some of the worst gaming results on test.

The Gigabyte’s Middle-earth: Shadow of Mordor minimum and average results of 63.49fps and 92.41fps are both mid-table, but both improve upon the MSI. Gigabyte’s board also beat its rival in Rise of the Tomb Raider.

Its graphical abilities were also highlighted by the Cinebench OpenGL benchmark; the result of 138.92fps was actually the best in the entire group.

Those good gaming results are hindered by disappointing application speeds. The Gigabyte’s Cinebench CPU score of 1335cb is the poorest here, and its Geekbench single- and multi-core results of 4721 and 21,285 are similarly slow. The MSI board is a little faster. Gigabyte’s board also came bottom of the results tables in the Sandra processor arithmetic benchmark.

The Gigabyte’s NVMe speed results were the worst in the test when it came to both speed and consistently, and it proved just mediocre in memory and SATA benchmarks.

It is, at least, a frugal product. Its 60W idle power draw is only one watt more than the MSI required, and its 112W peak requirement is among the best here. 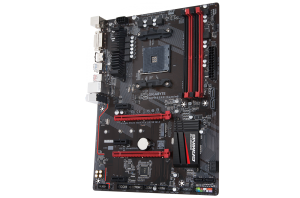 Why buy the Gigabyte AB350-Gaming?

The Gigabyte AB350-Gaming proved a decent performer in gaming benchmarks, but that’s where this board’s strengths lie – in application tests, it was disappointingly slow.

The specification is understandably restrictive too. Realistically, dual graphics aren’t an option here, and the lack of high-end cooling and enthusiast features rules out serious overclocking. You only get one M.2 slot, basic audio and networking and no USB Type-C.

Gigabyte’s board is definitely a better gaming option than the comparatively priced MSI, but the relative lack of speed and the basic feature set mean that the AB350-Gaming is only worthwhile if you’re building a budget machine.

The affordable Gigabyte board offers solid performance in gaming tests, and it has a specification that can handle modest, single-GPU system builds. However, its application, memory and storage performance is underwhelming. It’s only worth buying if you’re building a gaming system on a very tight budget.