Yesterday we looked at a high end case from SilverStone and today we’re looking at one from Gigabyte. At first it might seem strange that a company associated with components would bring out a range of cases. But actually it makes a lot of sense for the company that manufactures components to also make the thing that you put them in. Besides, competitors such as AOpen have done well selling cases for some time, while Asus also recently added cases to its line-up, so Gigabyte probably thought that it was about time it did so too.

Very much geared towards the high-end of the market this case is mostly constructed out of aluminium, although Gigabyte also has a version made of mild steel. The GZ-FSCA1-AN on review here is the first sample to arrive in the UK and as such is not a full production model. The 3D Aurora cases will be available in silver or black and all models will have an aluminium front bezel. It’s not tiny, and measures 205 x 510 x 430 mm (W x H x D) but a roomy case is good news for the upgrader.


Rather than going for a brushed aluminium look, Gigabyte has powder coated the case. This has its ups and downs. It doesn’t look quite as good as brushed aluminium, but it does add some scratch resistance. Some parts of the case are made of plastic; the most noticeable part being when you open the aluminium door. Again this has pros and cons. The downside is that plastic isn’t as durable nor as aesthetically pleasing as aluminium. However, it is easier to find drives of a matching colour. 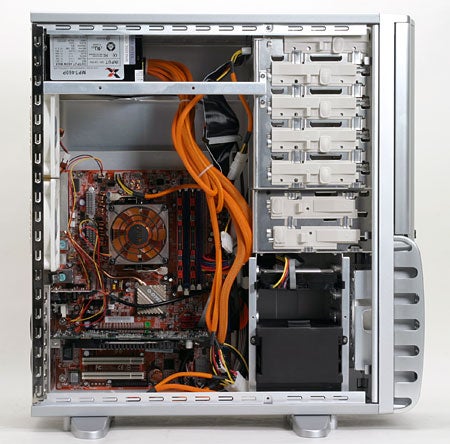 The left side has a vent cut out in it, although there are no fans fitted to it or any kind of tubing to fit over the CPU cooler. There is also a handle that’s used for opening the side of the case and a lock. Three thumb screws are also supplied to further secure the side. Oddly enough the rear of the case is mate from soft steel. I’m quite a fan of this, since aluminium is not a good material to put screws through and it’s also easier to fit the rear I/O shield due to the stiffer material.


None of this makes the case special per se. After all, there are many aluminium cases like this around. What makes this case special is when you open it up. The first thing you notice is that there’s plenty of open space inside the case, which makes it very easy to fit all the components inside it.

The next thing you notice are the dual 120mm rear case fans – a first as far as I know. A front 120mm fan has also been fitted to cool the hard drive bays. All the fans have built in blue LEDs that match the blue lit front of the case, but more on that later. If you worry about sonics you’ll be happy to know that all of the fans are very low speed – a mere 1,000rpm – and produce a minimal amount of noise.


The motherboard is installed using standard copper standoffs which are screwed into the aluminium back plate – not ideal in my opinion, but as long as you don’t change them around this should be fine. I’m slightly disappointed with the amount of screws that comes with the case as there are only nine standoffs and nine screws for mounting the motherboard, which isn’t enough for some boards if you’re going to use all the holes. 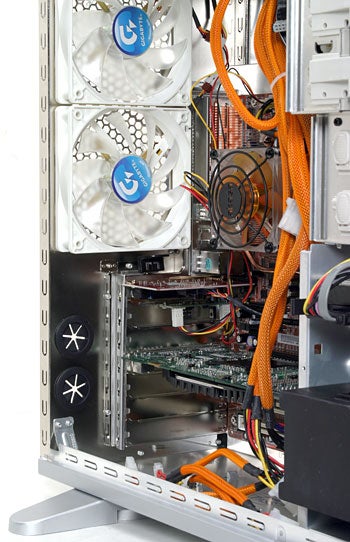 However, I do have to give Gigabyte praise for the pre-routed cables to all of the fans as well as all of the front connectors, which is the best I have seen in a case that is not part of a barebone system. There is even a special adaptor supplied for two different types of onboard FireWire connectors, albeit one of them is specifically for Gigabyte motherboards.


You don’t have to bring out the screw driver to fit any cards either, as they’re all locked in place by a single mechanism. The good news is that you can still use screws if you’d want to, which can come in handy if you have a card that takes up to two slots, since the locking mechanism doesn’t work that well with those types of cards. 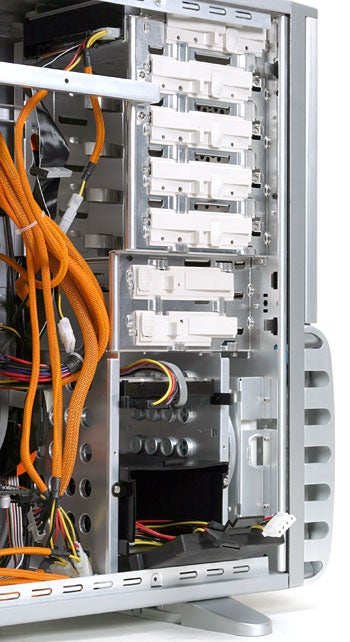 All of the case accessories come in a small plastic box which is screwed in to the 3.5in hard drive bays. This is a good place for them as you won’t lose them and you know were they are. Well, as long as you don’t install more than two hard drives that is, since the plastic box takes up three of the five 3.5in drive bays. A set of screw-less drive rails are provided for installing hard drives. However, it can be slightly awkward to get the drive rails to lock in place and you have to use a fair amount of force to push them all the way in.


There are also two front accessible 3.5in drive bays and five 5.25in drive bays, all screw-less. In contrast to the hard drive mounts, all of the front accessible drives are easy to install. Take out the front blanking plate, slide in the drive, push the latch inside the case forward to lock the drive in place and finally push the lock button downward and it’s all done.

Fitting a PSU takes a little bit more work, as this has to be fitted up and over two supports. However, if you’re using a very big PSU the left support bar can be removed to aid the installation. There’s plenty of space inside the case and this makes it a good solution for fitting a watercooling kit. Indeed, Gigabyte now makes watercooling kits itself.


On the bottom left hand side corner in the back of the case are two rubberised hose pass-through holes that should fit most watercooling kits. Of course Gigabyte is promoting its own 3D Galaxy products as the ideal solution to be used with the 3D Aurora. 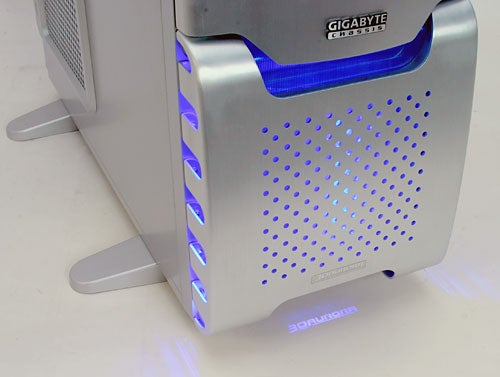 As I mentioned earlier the front of the case is lit up by blue LEDs, but Gigabyte has one again taken things one step further. A small removable plastic panel is fitted to the bottom of the front of the case and the one that comes pre-fitted actually projects the 3D Aurora logo onto your desk or your floor. If this is not to your taste however, then you can download a free application from Gigabyte’s website that enables you to make your own designs. Print them out on a laser printer and use with the blank cover that’s supplied and you can project your own designs.


On the right hand side of the front of the case is a lock that prevents access to the front drives as well as a single FireWire port, two USB 2.0 ports and a headphone and microphone socket. This is also where the power and hard drive activity LEDs have been hidden away. The bottom of the case has four fold-out feet which adds extra stability to the case. 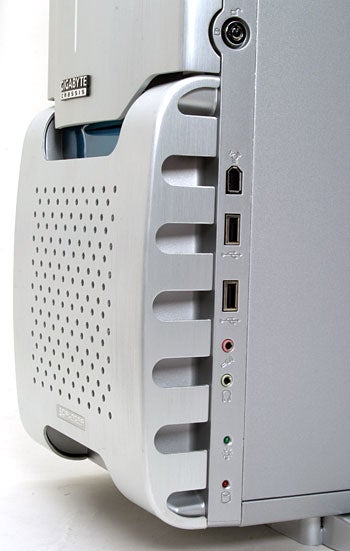 Kudos also has to be given to Gigabyte for providing two SATA power splitters as well as a couple of stick-on cable tidies in addition to the normal bits and pieces you get. Overall I have to say that Gigabyte has managed to impress me greatly with its first attempt at a case. The Gigabyte will be available towards the end of the month and will retail for a reasonable £85.00.


I have yet to find the perfect case, but for me, the 3D Aurora is pretty close. If you need a case with plenty of space and good cooling you won’t go far wrong with the 3D Aurora.