This could have been so, so much worse. Not just any video-game movie tie-in, it’s a pseudo sequel to one of the biggest and most beloved Hollywood blockbusters of the eighties. Twenty-five years later, there’s little reason bar an anniversary Blu-ray release and stirrings of a new sequel for Ghostbusters: The Video Game to exist, and this could have easily been just another dodgy exercise in milking nostalgia. Play the Ray Parker Jnr hit a few times, throw in a few phrases like ‘He slimed me’, drag whatever actors you can afford back for an afternoon’s worth of stilted dialogue, and you can still charge £40 for the lot. After all, isn’t that what so many of today’s licensed games seem to do? 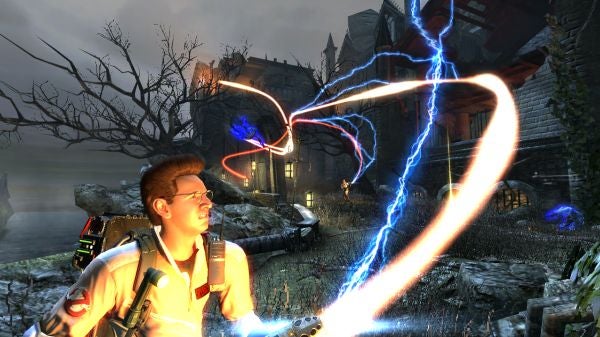 Well, Ghostbusters: The Video Game takes a different direction, and while it’s not an unqualified success, there’s no doubt that that direction is the right one, and that it should be a model of how to do licensed games in future. In terms of gameplay it’s not as polished as The Chronicles of Riddick: Assault on Dark Athena, but it’s been made under similar principles: get the original talent involved, respect the property and try to produce something that has the feel of the film but works in its own right. Ghostbusters does all this stuff very well indeed.


Set in 1991, some seven years after the events in the original movie and two years after Ghostbusters II, Ghostbusters: The Video Game picks up with you as a rookie recruit joining the existing ghost-busting team of Venkman, Stantz, Spengler and Zeddemore to tackle a new wave of paranormal activity in New York. Amazingly, Bill Murray, Dan Ackroyd, Harold Ramis and Ernie Hudson all reprise their roles, while Ackroyd and Ramis are actually credited with the script. It shows. These are the characters you know and love, in situations that ring true. And they’re not solving puzzles or blasting their way through the legions of hell – they’re trading quips, crossing lines and busting ghosts. 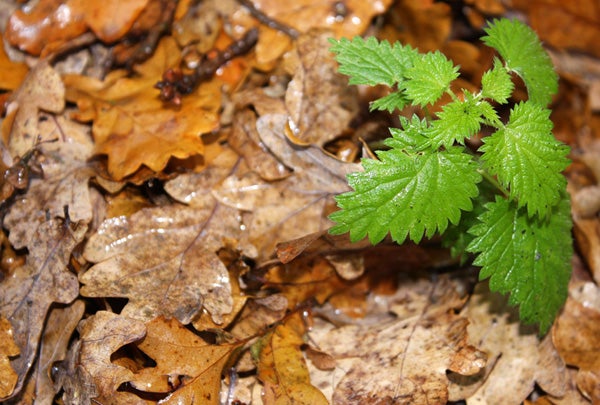 The tone is practically note perfect, veering between sharp humour, spectacular action and scares with the same wild confidence that characterised the first movie. This is a Ghostbusters you can recognise, and the vocal performances aren’t being phoned in (see just about every other movie license that’s not Riddick) but delivered with something like enthusiasm. For all the years that have gone by, these characters still feel right; Venkman the lazy, would-be womanizing joker, Stantz the puppy-dog spook obsessive, Spengler the jargon-spouting uber-geek. The game even squeezes in performances from Annie Potz (Janine Melnitz) and William Atherton (Walter ‘dickless’ Peck). How many other licensed games go to that sort of trouble?

In terms of gameplay, Ghostbusters plays out like a weird cross between Gears of War and the underappreciated GameCube launch title, Luigi’s Mansion (not that Nintendo can complain, given how much Luigi’s spook-hoover owed to the classic Proton Pack). You and your fellow Ghostbusters wander around the game’s various NYC locations, dispensing hostile spooks with the aid of proton pack and traps. While some incorporeal entities can be simply blasted into atoms, most need a three stage process where you a) shoot them with the proton stream to wear them down b) capture them with the stream and slam them against the scenery to wear them out then c) drag them into the beam of a carefully thrown trap for capture. Once one encounter is over, you use your handy PK meter to find the next, effectively following the trail that leads you from spook to spook to spook. 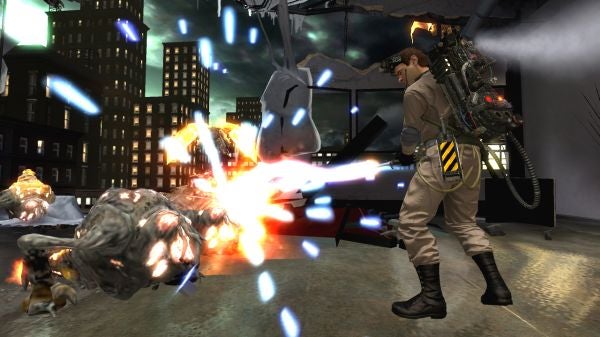 Be warned: Ghostbusters is a heavily scripted game, to a degree that makes Call of Duty: World at War feel like S.T.A.L.K.E.R. by comparison. There’s no real room to explore, the level designs are artificially linear, and you’ll find yourself countless times awaiting some scene to play out before you can get into the next bit of action. If you want puzzle-solving, adventure or complex tactics you won’t find it here: appropriately, this is a big, fat ghost train of a game, shuffling you along the tracks from one spooky combat set piece to the next.


This should make the game boring and repetitive, but amazingly it doesn’t. For one thing, Ghostbusters mixes up the spook types, adding in new spectral varmints requiring new and special treatment to zap and trap. For another, a steady stream of experimental proton pack upgrades add new types of stream or new abilities that keep the ghost-busting routine from growing stale. Beams can be used to stop fast-moving, heavy hitting ghouls in their tracks, while slime can be used to neutralise caustic black ectoplasm or create ever tightening cables of goo between objects. Boson darks take a role halfway between a shotgun and a rocket launcher, helping to wear down powerful enemies faster, or take out groups of smaller, more disposable foes. 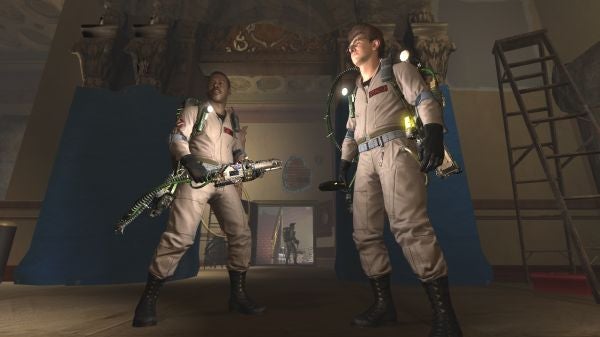 On top of this, all your weapons are upgradable, while the ghosts get more difficult to manage as you go on. The game constantly pushes your skills, but at the same time it gives you more and better tools to work your magic with. The set pieces get bigger and better, old favourites like the librarian and the Stay Puft Marshmallow Man put in an appearance, and locations change from supernaturally flooded hotel floors, through subterranean passages to ghastly other worlds. This isn’t the brightest or most intellectually demanding game around, but it works pretty hard to keep your interest.

Most of all, however, this is a game about teamwork. You’re nearly always working with the other Ghostbusters, sometimes playing a supporting role, at other times the reluctant lead. If you don’t play your part well, then things go pear-shaped, but you rarely feel like you’re being asked to do all the hard-work by a bunch of supporting NPCs. What’s more, the game makes teamwork the cornerstone of its health system. Take more than a little damage from sliming or aggressive ghosts and you’re knocked flat on your back, your proton pack sparking, but within seconds your fellow Ghostbusters will come to your aid and revive you. The thing is, they get knocked down too and need reviving, so if you want to survive, you need to ensure your team-mates stay in action. 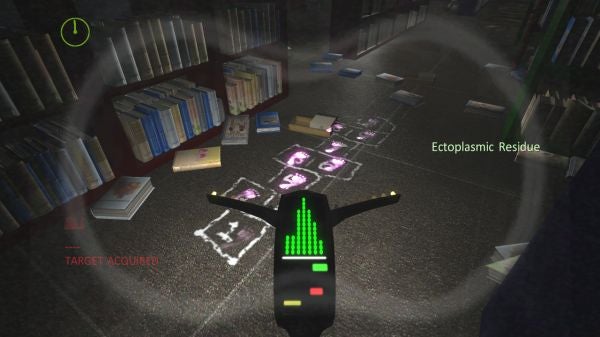 Let’s face it: most licensed games are technically and visually a joke. Not Ghostbusters. The environments are authentic to their filmic or real-life equivalents and richly detailed. The characters are convincingly modelled and well animated, with some great facial expressions that help you look beyond some odd moments and the lack of what you might call photorealism. Even the eighties hairstyles are believable. More impressively, the developers have combined cool particle weapon effects, great looking ghosts, destructible scenery and a decent physics engine to create some fantastic scenes of sheer mayhem and destruction. Nice shooting, Tex, indeed. The soundtrack, meanwhile, is everything you might expect, with the original theme tune and a nice mix of original and sympathetic new incidental music. The overall result has enough of the look, sound and feel of Ghostbusters to suck you in and swamp you with good, old-fashioned nostalgia. 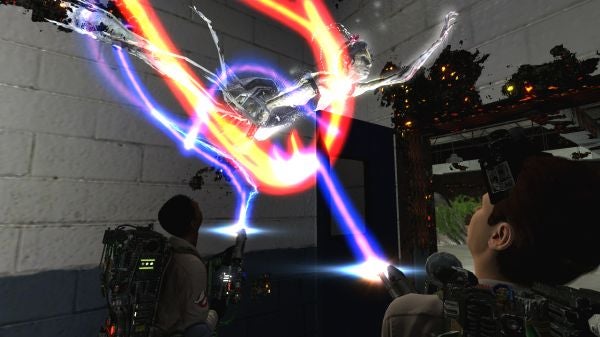 It’s also worth noting how hard the game works, like Fallout 3 or Bioshock, to keep you within its fictional bubble at all times. The back of the proton pack works as a health and status display, while an electronic guide device handles all the tutorial, info and upgrade options. It all looks mildly dangerous, unstable and home made, and the language used always ties into the lingo used in the movies. This is exactly how it should be done.

Unfortunately, there are some rough edges to the game, and those rough edges do their best to rub you up the wrong way. The scripted nature of the gameplay might not be an issue, but what is, is the fact that characters will stand there doing nothing withthe whole world grinding to a halt until you effectively hit your mark and do whatever you need to do to move the scene on. It’s not a game breaker, but it takes you out of the fiction for a minute or two. There are also times when the game ups the difficulty level by spamming you with enemies, then puts your ghostbusting colleagues in a position where they can’t easily revive you. Combine this with some occasionally poor or overly sporadic checkpointing, and Ghostbusters can, from time to time, become frustrating. Finally, some of the lip syncing in the cut scenes is borderline comical. The camera angles, the script and the dialogue are doing their best to convince you that you’re experiencing an interactive movie, but when the lips and the lines don’t measure up, all that good work falls slightly flat. 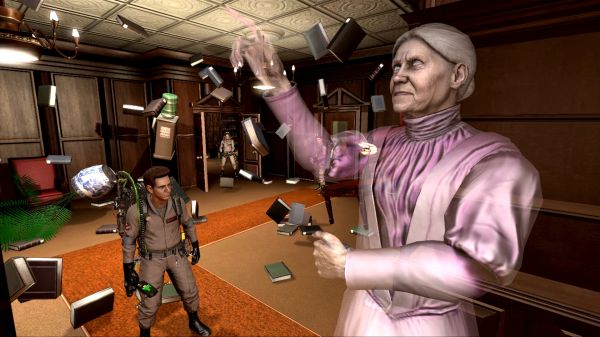 Still, it says a lot about the game’s charms that I’d really, really like to give it a higher overall score than the one you’ve seen at the top of this review. I can’t and I won’t, for the simple reason that Ghostbusters is too linear and too flawed to stand shoulder to shoulder with inFamous or Dead Space, but as far as film licenses go it’s one of the best in terms of taking you to a universe you know with characters you remember and making you feel part of that story. It’s not a string of sequences inspired by bits you might recall from the film, but a new experience that is still very much Ghostbusters. Even when you’re tempted to sneer about it, or when you die unfairly for the fifth time in that section, something makes Ghostbusters impossible to dislike. That old ‘dum, dum, diddle-dum, dum, dum’ basslinekicks in, and before you know it there’s a huge grin slap bang on your face. If that’s not a reason to buy it, I don’t know what is. Twenty five years on it’s nice to say that bustin’ still makes me feel good, and I think the same might well go for you as well. 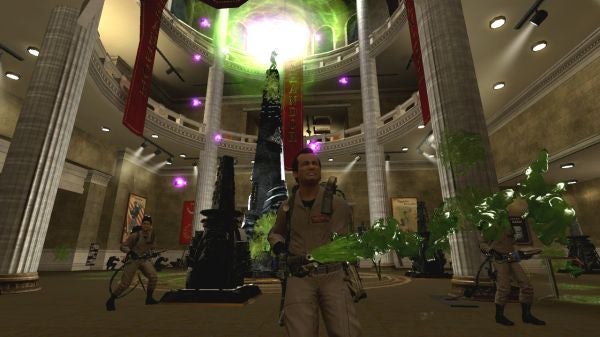 
Judged simply as a game, Ghostbusters is too linear, too dumb and too rough around the edges to be recommended, but as a new take on the Ghostbusters world it’s practically unmissable. While it could be better, it’s a fine example of how a licensed game should be approached.