It has to be said that Ghost Squad has a lot going against it. It’s a classic example of the on-rails, arcade, light-gun shooter. It boasts a pitifully short running time, wretched cut-scenes and dialogue, mildly inept graphics and some of the strangest art choices I’ve seen in many a year. Frankly, it’s the sort of game I should do my utmost to discourage anyone from making, let alone buying.


Yet at the same time, I do kind of love it. 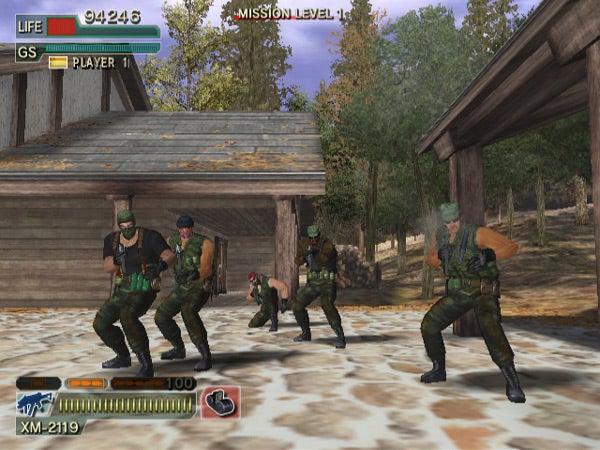 Ghost Squad was originally made in 2004 for Sega’s Xbox-based Chihiro arcade board, and the heritage shows through in the Wii conversion. It’s a fairly simple light-gun shooter, with a grand total of three (yes, three!) levels which you and up to three chums can proceed through, shooting roughly anyone that appears on the screen. You earn points for how quickly and how accurately you blast away the bad guys, and lost health when you’re shot or when you accidentally kill one of the few people you’re not meant to kill – usually a hostage or a Ghost Squad comrade. If you’re looking for tactical depth or long-term appeal, this isn’t really one for you. Ghost Recon Wii it most certainly is not. 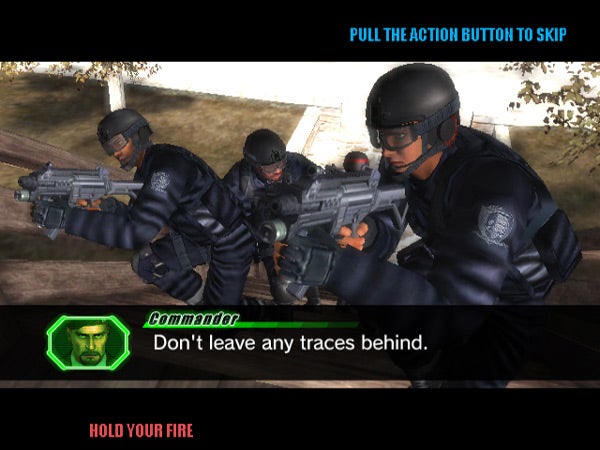 Admittedly, Ghost Squad does go deeper than some arcade shooters. In one of the missions, you’re asked to handcuff hostages (by holding and pressing the A button), while in another you’re expected to defuse landmines (by clicking the A button repeatedly over them). You might be commanded to defuse a bomb (target and clip the wires in the correct order) or blow away a helicopter with guided rockets (keep the reticule over the offending whirlybird, then fire away). You might even be asked to do a bit of long-range sniping or, in the trickiest boss battle, kill a terrorist head honcho with a single shot to the head. We even get a handful of sections that simulate hand-to-hand combat by targeting the highlighted limb and hitting A. In other words, it’s not all a case of aiming the Wii remote at the screen and holding down the B trigger. Sometimes you have to aim the Wii remote at the screen and press the A button instead. 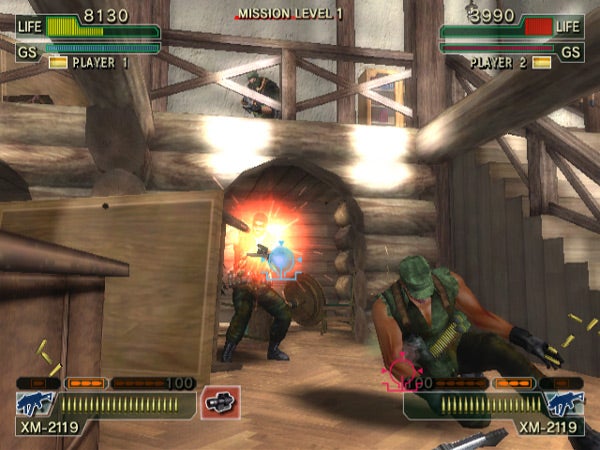 What’s more, the game pushes for a little replay value by incorporating a system of branching pathways. At various points in each level you’ll be asked to shoot one of two or three onscreen options, which will then decide which scene you have to fight through next. Different branches open up different scenes later on, and it will actually take longer than you might think to open and play through all the different combinations. Plus, the more you replay, the more difficult the levels get, so there is a certain amount of sense in going back for more.

There are even a few bonuses to unlock. You might expect new weapons and new costumes, but you can also unlock new options for the game’s four-player party co-op party mode. Want to cruise through Airforce One, shooting bikini-clad babes with a dolphin-shaped water-pistol? Paradise Party mode is for you. Or wouldn’t it be cool to play as ninjas, shooting rival ninjas with razor-sharp shuriken? Well, my friend, the self-explanatory Ninja mode is right up your street. 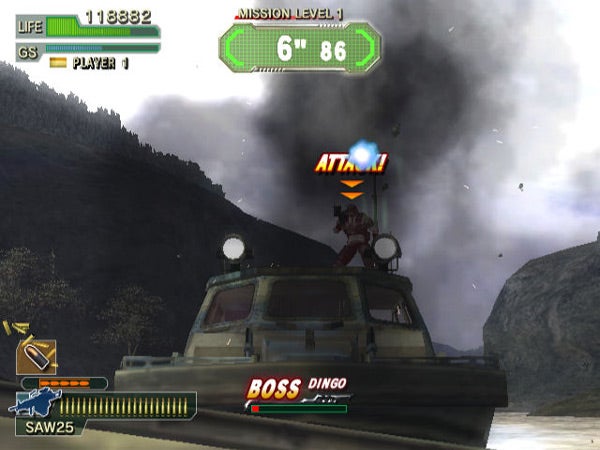 What makes the game so lovable? Certainly not the visuals. I couldn’t call Ghost Squad a shoddy port, but it certainly looks dated. The characters are slightly blocky and lacking in textural detail, the lighting is straight from the last console era, and the animation is no more complex or realistic than it was in Virtua Cop 2 over a decade ago. It all works in a slightly retro, classic Sega sort of way, but you couldn’t call it impressive. Sound effects and music rise to a similar level of competence, and no imagination whatsoever has gone into ways of using the Wii remote to do anything but point and shoot. In terms of technical achievement and innovation, Ghost Squad is a fairly dismal effort. 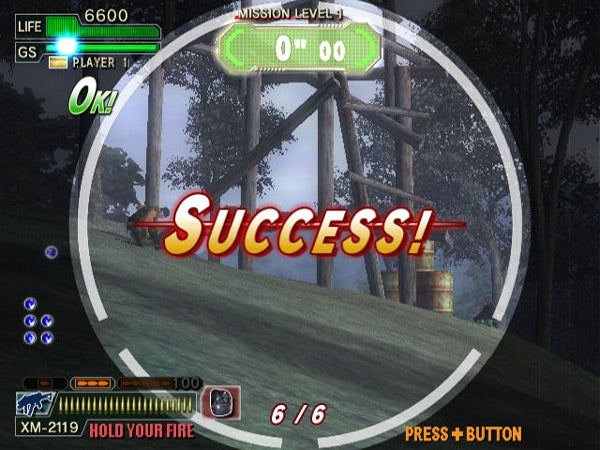 All the same, it has a certain silly charm to it. Any plotline where terrorists can hold the president hostage not just once, but twice within the space of three missions, has to be worth something. The whole special forces setup is farcical. “Don’t leave any traces behind” our commander advises during the pre-mission briefing, then seems happy to ignore the forty bullet-riddled corpses, numerous shot hostages and completely wrecked government villa we’ve left in our wake. I guess he just expects a little ‘collateral damage.’ In fact, each and every rotten line of speech is delivered with the perfect blend of gung-ho grit and clichéd can-do, as if all the actors thought they were auditioning for a part in Pearl Harbour 2.

Meanwhile, the Indigo Wolves terrorist group is possibly the campest bunch of terrorists in town. With their preference for tight vests and camouflage trousers they resemble nothing more than an all-male dance troupe gone bad. As no real motivation is given, I can only imagine that they’re upset about the reviews of Kylie’s last album, or maybe times are just hard now that Britney Spears isn’t in a state to tour. The Wolves’ leaders are even more preposterous, with one – the superbly monikered Alex Havoc – having possibly the silliest drawn-out death cry in recent video game history. I can’t say whether it’s intentional or not, but Ghost Squad is indisputably hilarious. 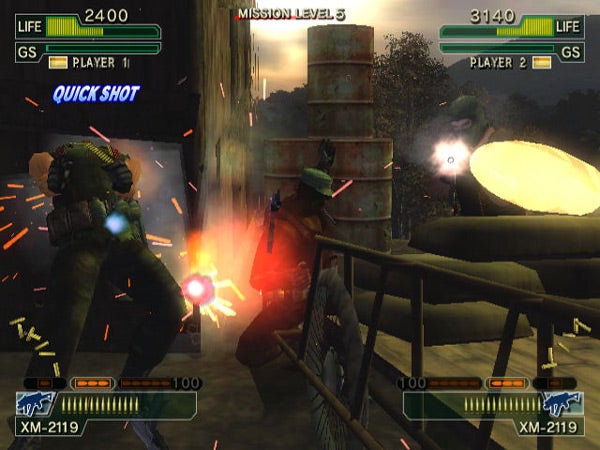 Indeed, the actual light-gun gameplay is just about right for the Wii’s more casual gaming audience. Just about anyone can pick up and start shooting, jabbing the + button every now and then to trigger a continue, then carrying on with the action. There’s a little too much going on with four players, but with just two it’s an entertaining afternoon’s worth of brain-dead blasting. 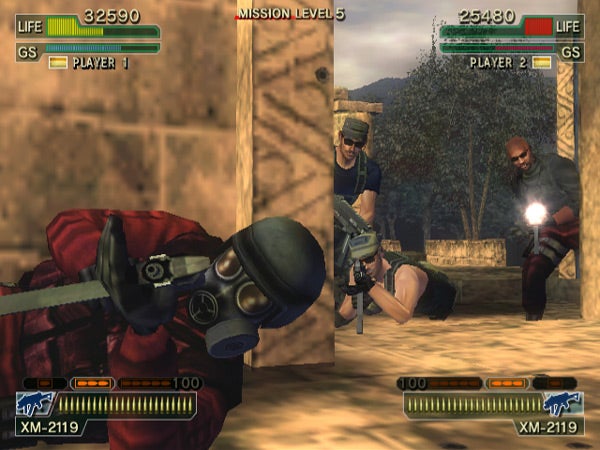 Still, much as I love Ghost Squad – and I do – I’m still going to have to slap a six score on it, for the simple reason that there’s just not enough game here to justify the £25 outlay. Yes, the branching, the unlockables, the high-scores and online leaderboards add replay value, but would I suggest that anyone pays £25 for a game you can hack through in less than thirty minutes, with one level taking less than five? Not on your nelly. I’d tell them that if they wanted a half-decent light gun game they should opt for Resident Evil: Umbrella Chronicles instead. I would, however, be pleased to suggest that they rent it, because with a mate or two to play with Ghost Squad really is a ball.


Good dumb fun, with plenty of possibly unintentional hilarity. That said, you’d have to be barking to actually buy it.