If you’ve never seen the seminal anime Ghost in the Shell, do yourself a favour: stop reading this preview now, hop onto Netflix and load it up. You won’t be sorry – it still stands up twenty years after its original release as a film – and after you watch it you may have some idea of why the film’s legacy is something of a millstone around the neck of Ghost in the Shell: First Assault Stand Alone Complex Online.  (We’ll be referring to it as First Assault from here on in, since its full title is a bit of a mouthful).

First Assault is a multiplayer shooter set in the universe of Ghost In The Shell – well, Ghost in the Shell: Stand Alone Complex if you want to be absolutely bang on – and while it’s a decent enough game, it’s sitting in the shadow cast by a colossus. The reason for this is that the world of Ghost in the Shell is so rich, so layered and so damn involving it cries out for a game that would allow its players to explore every inch of it at their leisure.

Ghost in the Shell is set in a dystopian cyberpunk future where melding machine and flesh is an everyday activity and hackers have been able to add causing cerebral damage to their already lengthy list of computer-based shenanigans. Both the movies and the Stand Alone Complex series focus on Section 9, a cyber enhanced group of government black ops soldiers who are given free reign to operate outside the usual legal guidelines. While the action starts at street level, Section 9’s activities usually bring them into contact with corruption that spirals up to the very top levels of government. 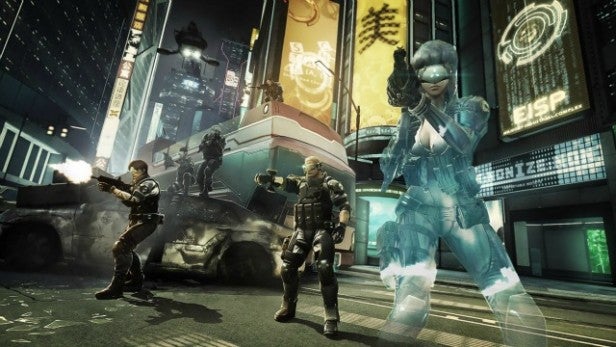 To do the anime justice, it would make sense to adapt it as an RPG. Since this hasn’t happened, gamers will probably have to wait until the new Deus Ex game comes out later this year or whenever CD Projekt RED decide to kick out Cyberpunk 2077.

In the meantime, First Assault Online, which is currently available on Steam Early Access, is a team-based tactical shooter. You’ll have to shell out for it at present but apparently it’ll be free to play at its official launch, likely bolstered by a bunch of in-game items available for a price. The maps are small, close-quarters hotboxes favouring the run-and-gun play style of Gears of War or Call of Duty. So far so standard. 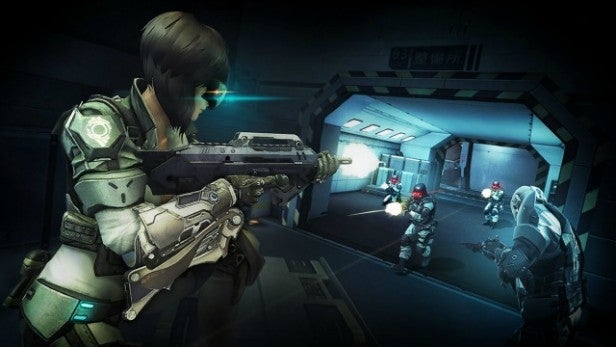 But First Assault Online isn’t a straight rip on its source material. In it, players are plonked into the metallic boots of the Section 9 operatives – Batou, Kusanagi and the rest – and they’re linked through the combat SkillSync system. Essentially this aims to recreate one of the team’s features in the series, linking their cyber-enhanced brains together when they head into a firefight.

It’s a rather neat feature, in fairness, which results in two interesting aspect. First, the SkillSync system allows players to share abilities with other squad members when they’re in close proximity. So if you’re in the vicinity of Kusanagi, for example, you can use her thermoptic camouflage, turning you near-invisible for short bursts and making you harder to hit. Second, along with sharing their teammate’s abilities, players are encouraged to stick together – lone wolves with no interest in teamwork need not apply as you won’t have as much fun and will more than likely piss off your teammates. 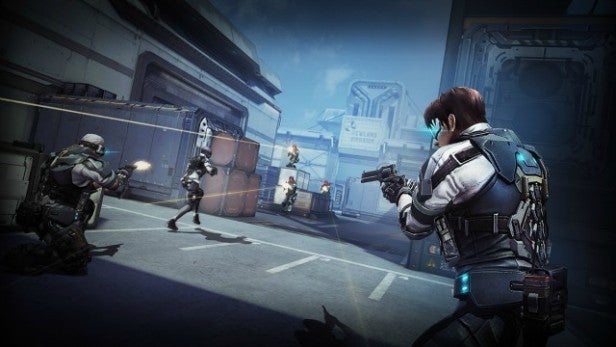 The developers have also gone to great lengths to recreate the look and feel of the Ghost in the Shell universe. The visuals, as one would expect, are positively swoon-worthy and the actors who voiced the characters in the anime series are on hand to provide their vocal talents here. But while all the presentation pieces are in place, running and gunning with Section 9 isn’t the unbridled thrill fans may be expecting from a game with ‘Ghost in the Shell’ in the title.

It’s fun, sure, but First Assault Online feels a little lightweight at present.

Since the game is in Early Access, one has to reserve judgement at this stage. It’s hard to judge what it’ll look like after launch – we don’t know, for example, what content will be available through grinding unlocks and what players will have to shell out real-world money for.

First Impressions
It all really depends how hyped up you are to play a Ghost in the Shell game and whether you find the dark and rich world of the anime used mostly as a backdrop for a shooter. Speaking personally, I wanted to see what was outside those map walls. I wanted to be lost in Nihama Prefecture – think Blade Runner with ten times the amount of gadgets and you’ll start to get the idea. Once can dream, I suppose…