It’s hard to talk about Get Even without ruining it. It’s easily one of the most intriguing and bizarre titles I’ve played for some time. Developed by The Farm 51 and published by Bandai Namco, it’s an indie title, but one that clearly has the ambition to be more. This is why it’s so jarring.

To look at it from afar, you’re probably not going to be overly impressed. Get Even isn’t the best game visually, and its dark, dank atmosphere gives off the impression that this is yet another run-of-the-mill shooter, but this simply isn’t the case. Part-shooter, part-stealth experience, part-puzzler – among a few other sub-genres as and when it chooses – the real appeal here is the story and how nothing is ever what it seems. From the moment you step into the shoes of Cole Black you’ll be left guessing what’s round the corner, and this is what makes Get Even so compelling.

Off the bat you’re presented with a hostage situation involving a girl with a bomb strapped to her chest. You have two choices: hunt down the disarm code by roaming around the building or whack in a random number and blow the girl to smithereens. 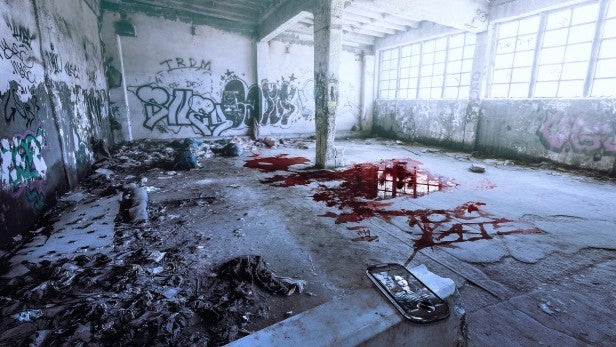 The expectation, of course, is a ‘game over’ screen if you killl her and the chance to try again, but that’s not the MO here. Instead, the story continues, letting you know that Cole was experiencing all this via a VR headset as part of an experiment to help him move on from past incidents that are clearly causing him a lot of grief.

The thing is, our main man is understandably annoyed about all this, because he has as much information as the player does: he has no idea what’s actually going on. That means you’re both being brought up to speed simultaneously, creating a very harsh, unique tone that is equal parts fascinating and jarring. You’re meant to be feel uncomfortable and confused and, more often than not, you absolutely will.

The fallout from this is you can’t really believe any of the information you’re being fed. The mysterious Red in control of the experiment serves as your guide, but given this opening scene was actually a trick, convincing yourself that anything is legit becomes a real challenge. You’re always questioning what’s being presented, and that’s both excellent and difficult. 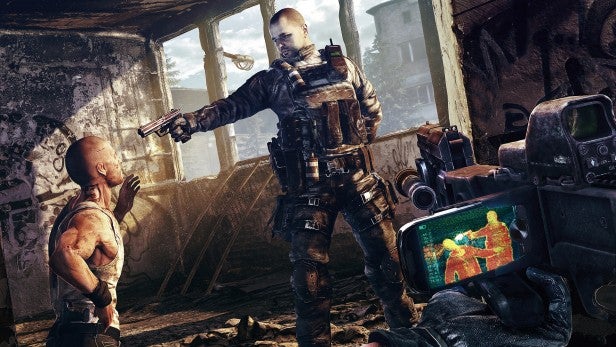 To go into more detail here would be grossly unfair, as the sole reason to play Get Even is to enjoy the ride and see how it all unfolds. In that sense, it’s a wonderful success, going as far as to toy around with what you’d expect from choices in a game. As opposed to the usual ‘pick a path’ approach, even the smallest decision can have tiny impacts on your own playthrough.

Let’s say you take out a guard, as you’d be inclined to do during when you have a weapon in hand. Said guard may be on the phone, and when you listen in to the conversation they were having… let’s just say the consequences will, likely, make your jaw drop. Farm 51 has gone all out to think of every outcome. 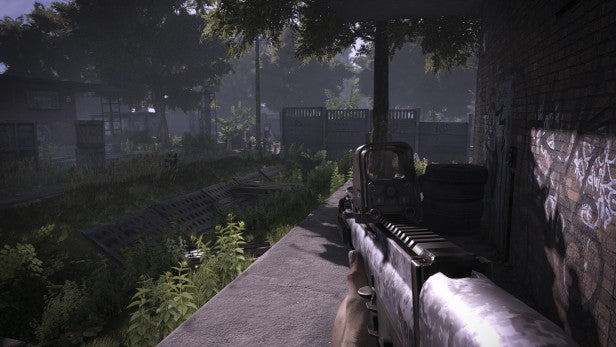 The actual gameplay comes together in a similar way, although this isn’t as riveting or solid as the narrative around it. Get Even is not the best shooter in the world and, while passable, it often feels inflexible and stiff, which can cause a few issues when it throws multiple enemies your way. Even then, there’s still reasons to praise what’s here, as some of the weapons on offer are so weird and wonderful that they’re a a joy to use. The Corner Gun is right at the top of that list – it does exactly what it says on the tin.

The puzzle elements follow a familiar path. A few fall flat, but the ingenuity that surrounds them, coupled with the fact there isn’t just one solution, is very welcome indeed. Exploring your environment will always pay dividends, but if you want to put your own brain to task you certainly can.

Get Even refuses to be pigeon-holed at any point, and though some people won’t be able keep up with the madness, for those that can it’s an entirely unique experience. Bandai Namco may just have the most interesting game of 2017 here, and a potential huge cult hit.