If you need a super-large BBQ for entertaining lots of people then the George Foreman GFDRMBBQ Drum Charcoal BBQ might be just what you need. Offering plenty of cooking space and a warming rack, this drum BBQ is hugely flexible, whether using direct or indirect heat. It's generally well built, too, with a few slightly cheaper elements that can be forgiven at this price.

If you’re often cooking for lots of people, or want the flexibility to cook larger joints of meat, the large George Foreman GFDRMBBQ Drum Charcoal BBQ could be the model for you.

With its long cooking grille, warmer and lid, it’s surprisingly feature-packed for the price – but build quality could be a bit better.

Build quality – Largely robust, but with some slightly cheaper elements

The George Foreman GFDRMBBQ Drum Charcoal BBQ comes flat-packed, but 20 minutes and a screwdriver are all you need to get it assembled. Once put together, the matte-black finish looks fantastic; the BBQ looks far more expensive than the price suggests.

Yet, there are a few telltale signs that this isn’t the most expensive model, including a lid that doesn’t quite shut neatly. The wobbly cheap plastic wheels are another giveaway, as is the lack of a wire shelf for storing charcoal or your BBQ implements.

There is a handy fold-up shelf for keeping food or condiments on while cooking, and the integrated handle is useful for storing tongs when not in use, preventing them from becoming too hot. This handle is also what you’d grab when moving the unit, although it’s a little wobbly for lifting and rolling the BBQ. 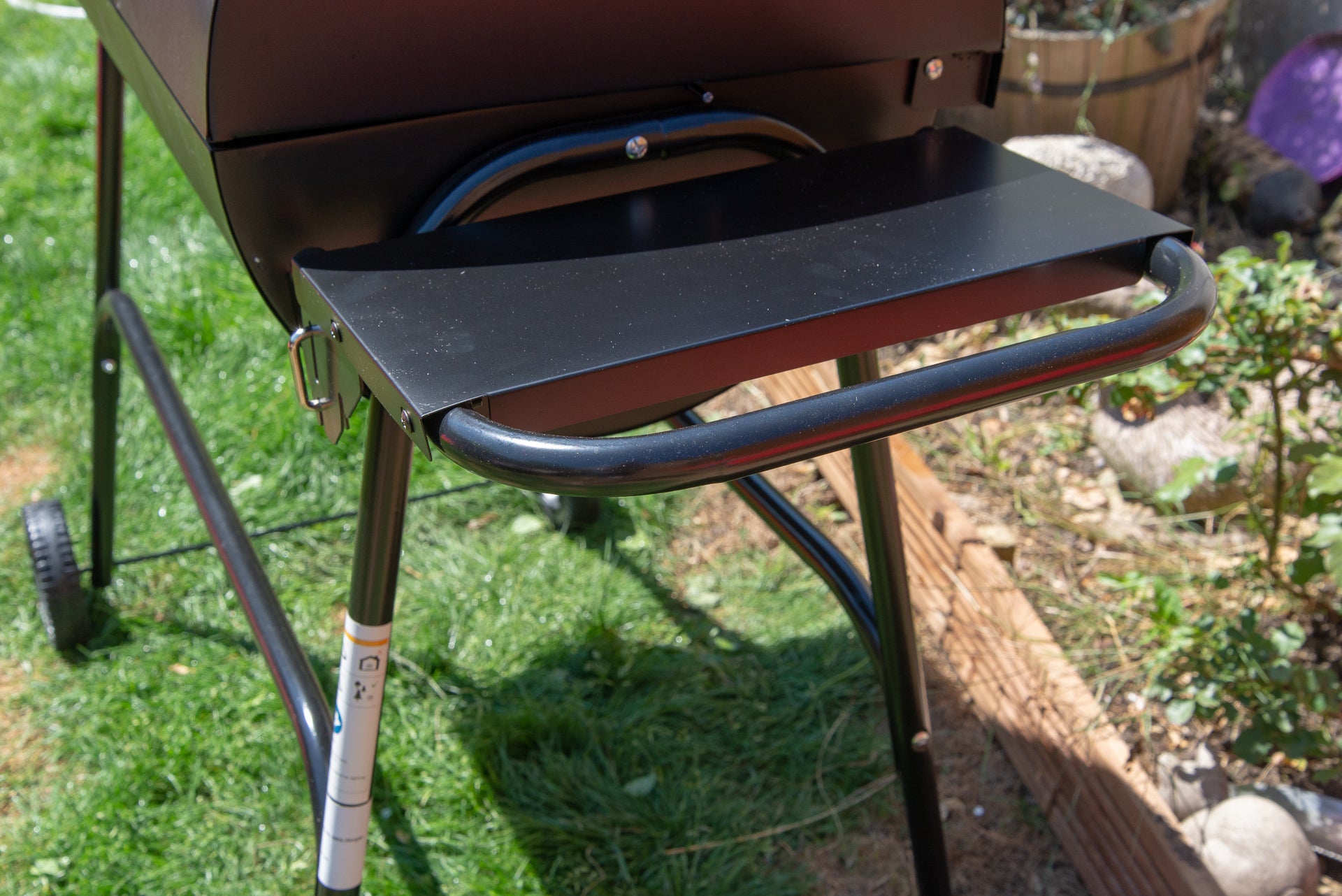 The lid features an integrated thermometer. George Foreman has clearly replaced the model originally shipped with the BBQ, since there’s a slip-in sheet with alternative installation instructions. As such, the thermometer doesn’t fit flush to the case. 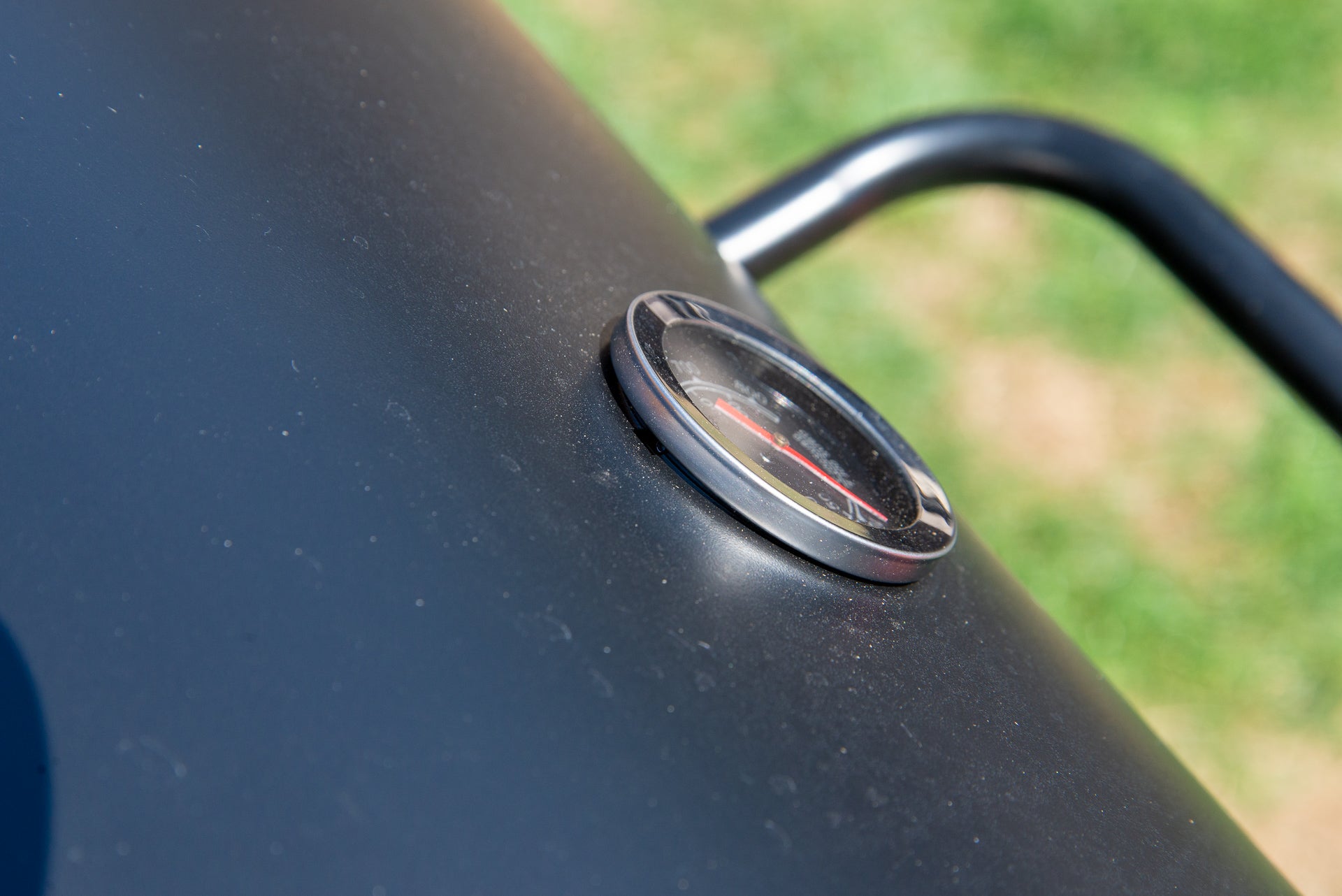 Inside the case is a warming rack, which lifts up out of the way. It’s a handy way for keeping food hot, while cooking. The main cooking area sits above the suspended charcoal holder. There are two positions, allowing you to adjust direct heat to your food; vents in the side of the drum allow you to adjust airflow and temperature. These vents aren’t marked and can get loose over time, so finer adjustments can be a little tricky. 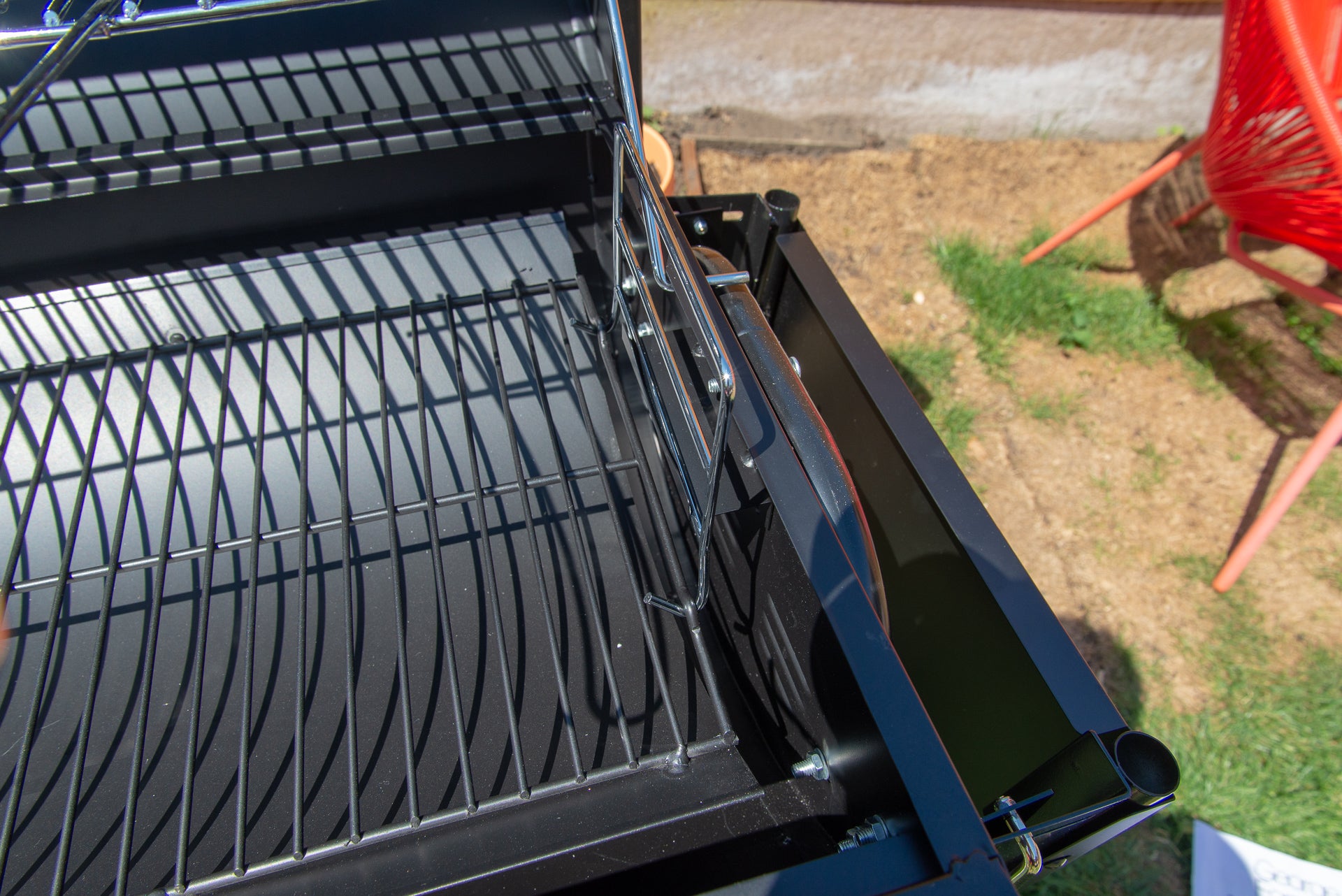 Adjusting the air vents requires the use of a small tool. Thats fine, but it’s something else to store. Likewise, removing the grille requires the two loose handles, which you then have to find a place for. Trying to carry the big grille is tricky, too. 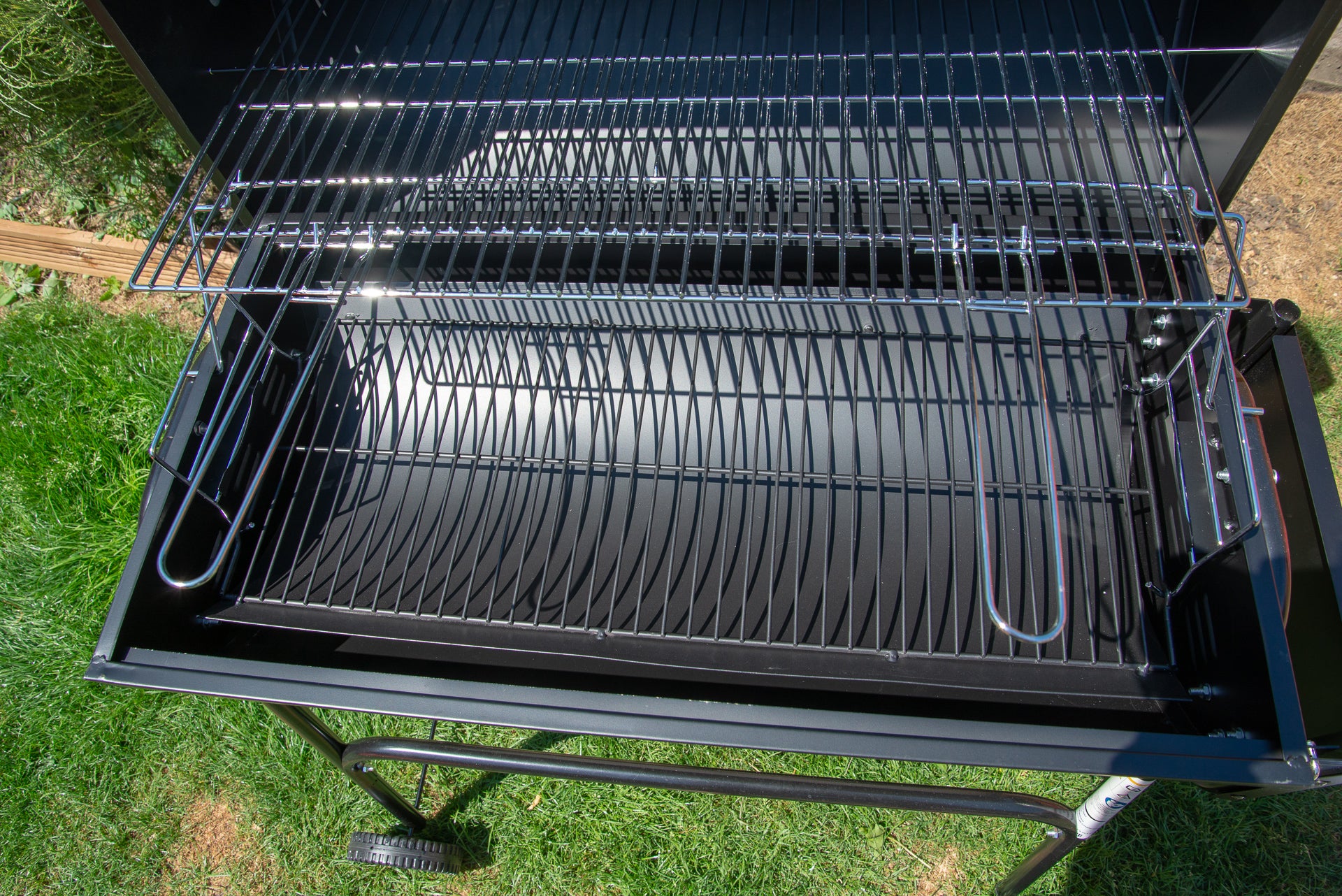 Performance – Plenty of cooking space and lots of flexibility

There’s plenty of room for charcoal, although placement will depend on what you want to do. For indirect cooking, it’s best to place charcoal at either end of the cooking area, allowing cooking of the type you’d get via an oven. For traditional grilling, it’s best to spread the coals over the length of the BBQ.

The George Foreman GFDRMBBQ Drum Charcoal BBQ has a 60 x 29cm cooking area, plus the warming rack. As such, it’s possible to fit on a lot of food; it’s ideal for entertaining larger groups. 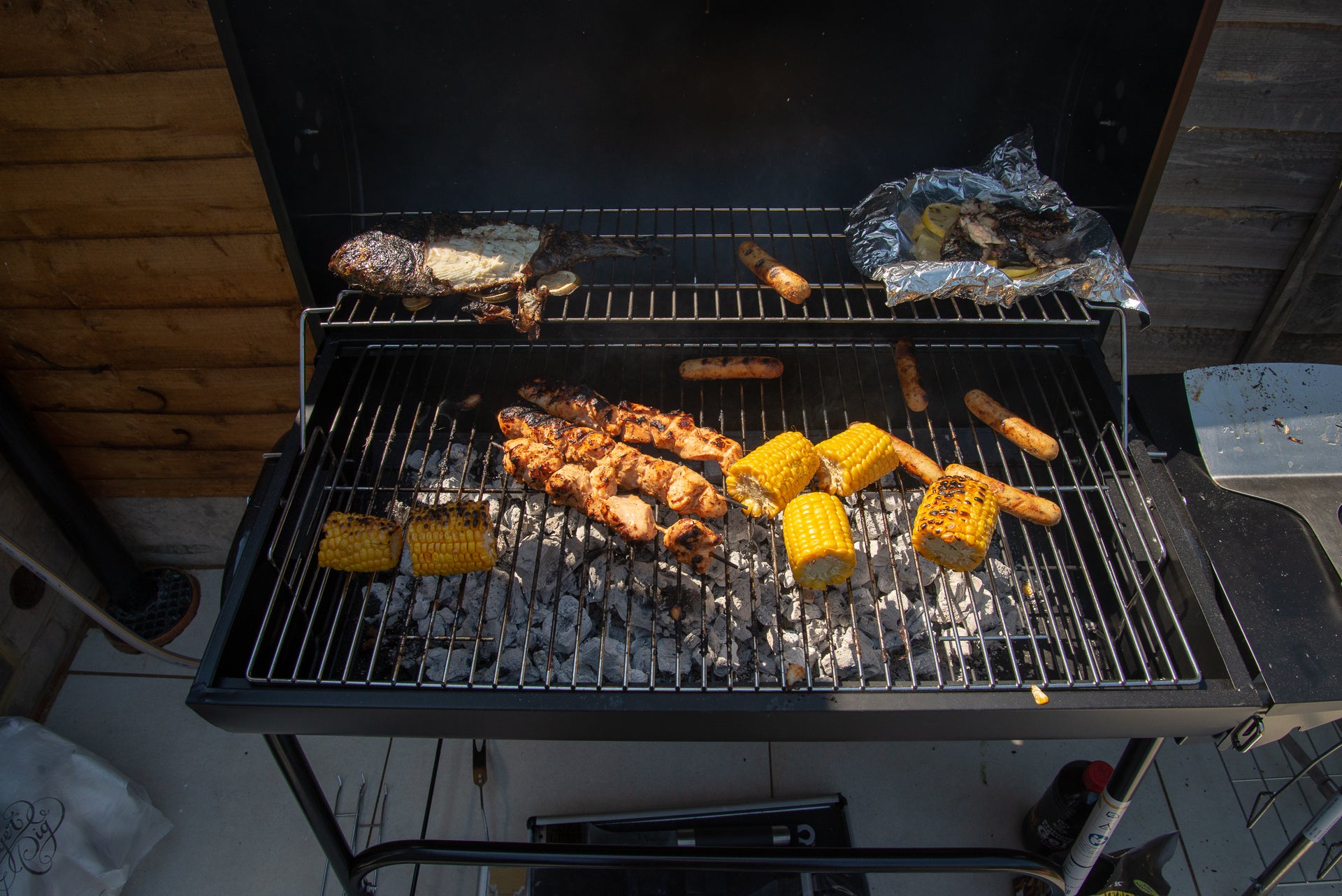 Adjusting the air vents, the thermometer read 170ºC, but I measured the inside temperature at 212ºC. Typically, these type of thermometers offer only a guide to temperature.

The outside temperature of the BBQ was 190ºC and very warm to the touch. George Foreman doesn’t use the thickest metal, so this BBQ isn’t as well insulated as others. As such, I had enough fuel to last a single cooking session of an hour. 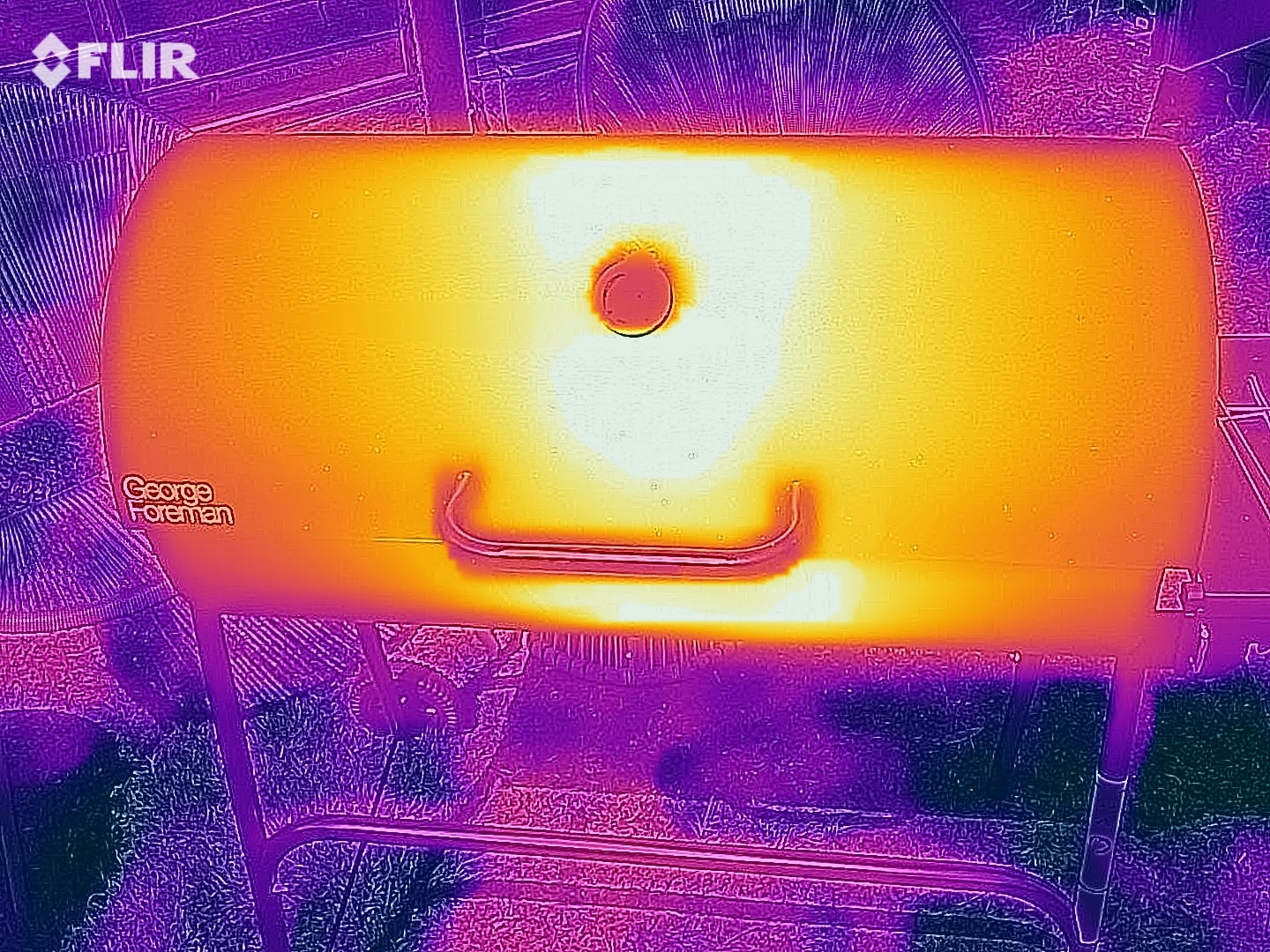 I cooked two marinated chicken kebabs, using indirect heat with the lid closed. The result was two well-cooked and succulent kebabs, with only a slight bit of charring where the end of the kebabs went over the coals. 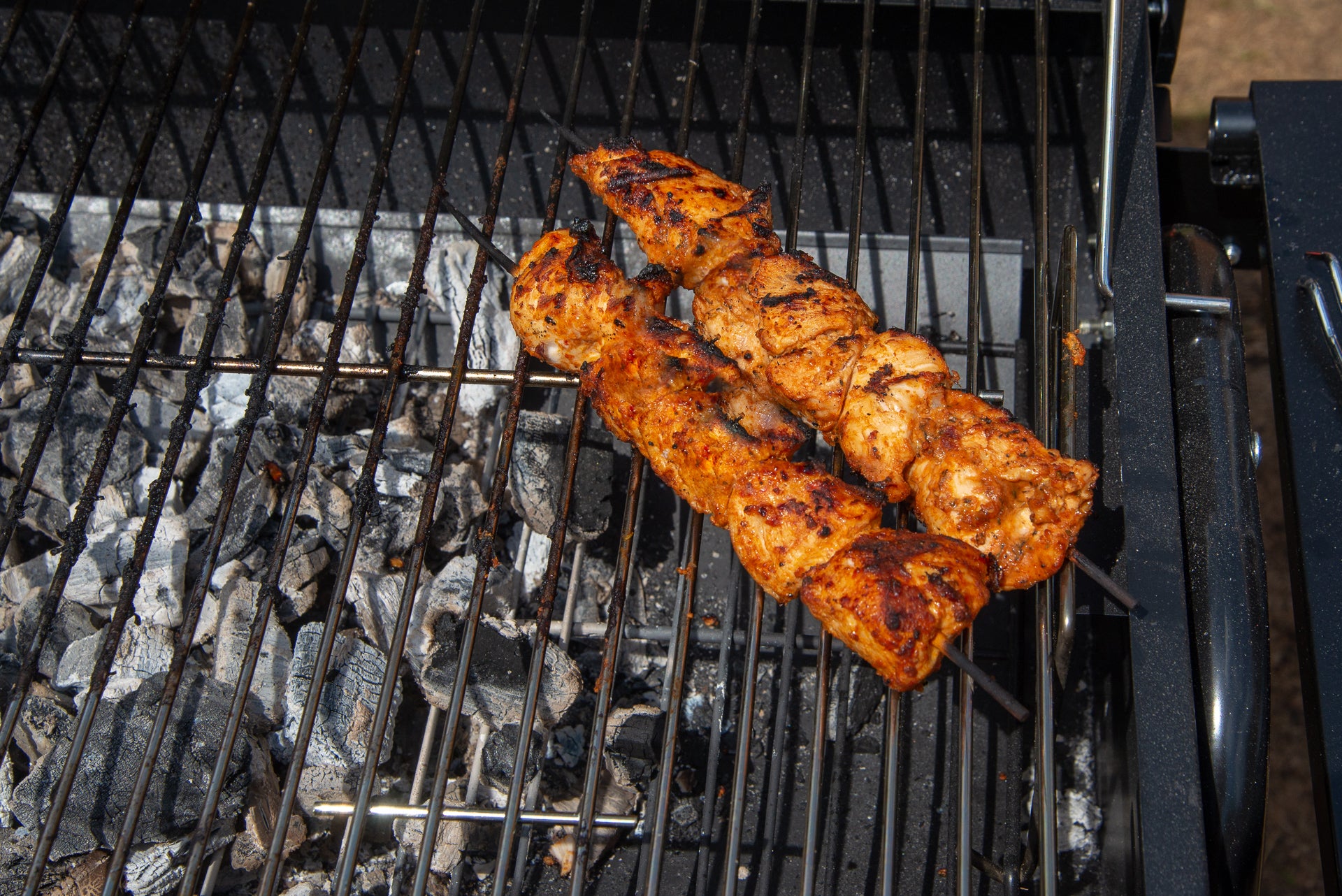 At the end of cooking, the grille can be removed for cleaning. Once the coals have cooled down, the charcoal pan can be picked up and tipped away. This left some ash inside the main drum, which you may want to vacuum out from time-to-time. Generally, cleaning is easy – but you do get some fat and mess in the main drum, so you’ll want to clean this regularly, too. 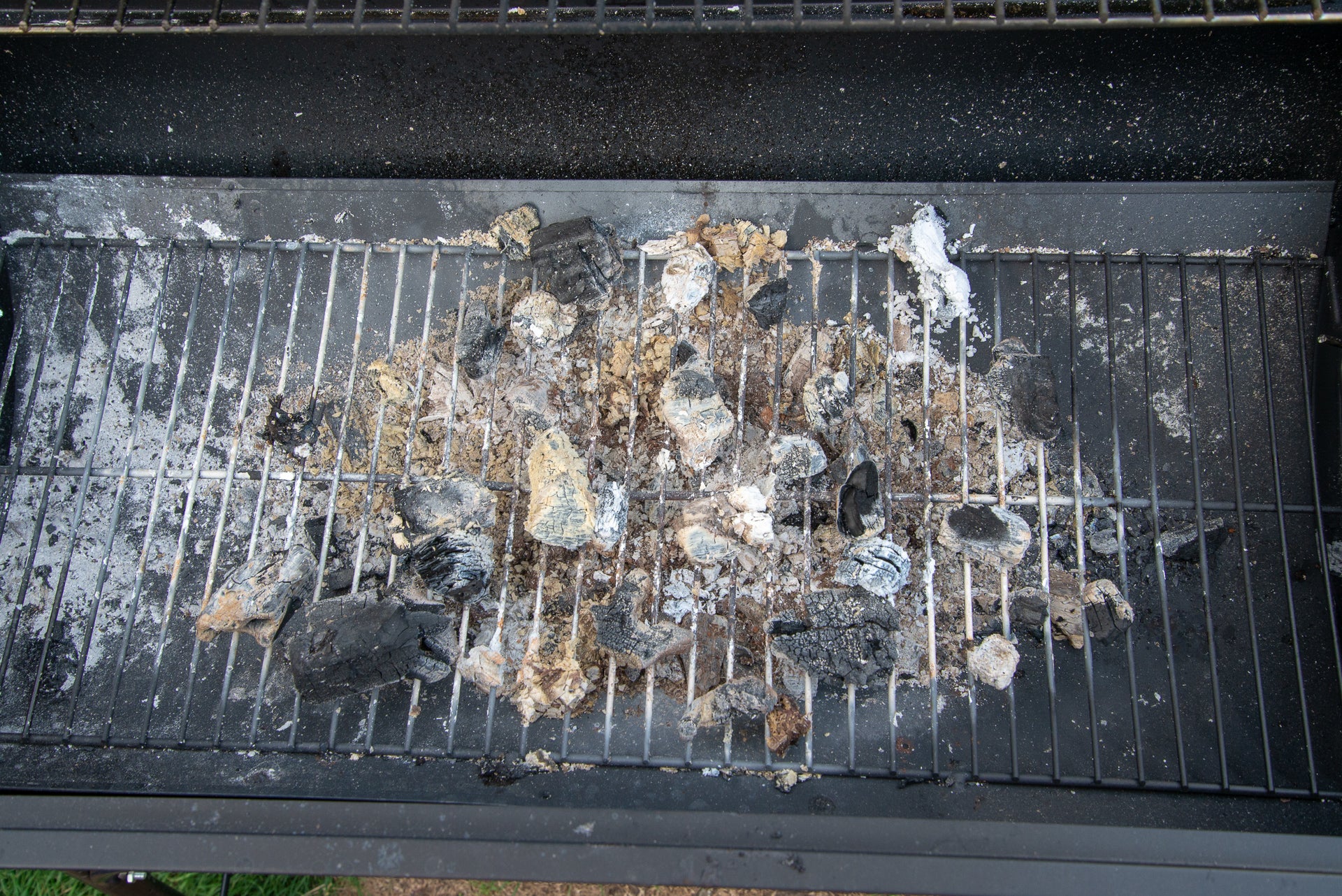 Should you buy the George Foreman GFDRMBBQ Drum Charcoal BBQ?

Although there are a few cheap areas to the build, and the fiddly removable handles are a bit annoying, the George Foreman GFDRMBBQ Drum Charcoal BBQ offers staggeringly good value. If you want a sizeable BBQ with plenty of room to cook for large groups, it’s a superb choice.