I should have guessed that this one would be trouble from the start. A DS conversion of the most fiendlishly addictive retro arcade shoot ‘em up of recent times? How could it not be a recipe for the dreaded DS crab hands? Sure enough, ninety minutes went by after I picked the thing up for one last go and, now, I’m in agony. I can barely type. I might never play a guitar again – so there’s some good news, my wife assures me – yet I can’t wait to go back and have another session. Damn you, Kuju Entertainment, did you have to make this port so good? 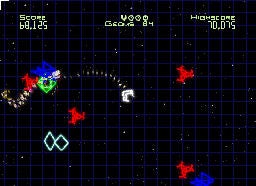 I know – you had a great game to begin with. While producing a silly sub-game for Project Gotham Racing 2, Bizarre Creations took a handful of the oldest ingredients in gaming, mixed them up into a fresh new cocktail, and then made it look new and exciting for the modern HD age. Almost anyone can knock out a quick retro rip-off, but Geometry Wars had an almost perfect interest curve, dragging the player in with intuitive twin-stick controls (one stick moves the ship, the other aims the constant stream of bullets) then steadily raising the difficulty level while increasing the complexity of enemy attacks.


Somehow, a bunch of simple shapes take on behaviours that give them a character all their own, whether it’s the dogged persistence of the Rhombus or the sneaky, ‘yeller’ antics of those cowardly green squares. Throw in the neon-lit, next-generation Vectrex look and a whole collection of cool particle effects, and you have a game that helped define a gameplay style and aesthetic for a whole new wave of retro wannabes. 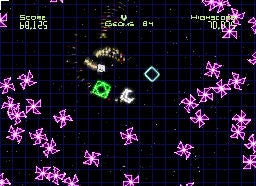 And Geometry Wars: Galaxies doesn’t do anything to mess this up. Sure, the look isn’t quite as refined. Those bright neon colours are a little duller on the DS screen and some of the effects, particularly the game’s infamous black holes, are presented in a toned-down fashion. However, this is still recognisably the same game. Whack in a pair of headphones and turn the pumping soundtrack up, and it’s remarkably compelling – as loud and brash as any arcade classic you could mention.

The controls, meanwhile, are superbly implemented. On the default setting, the digital D-pad takes the role of moving the little, claw-shaped ship, while the touch-screen directs the stream of bullets – just drag around the little vessel in the middle of the screen, while using the visual indicators on the main game screen to see the current position of the stylus and the current direction of fire. And when things get too tight, simply tap the left shoulder button and unleash a smart bomb to clear some room.


You could play using the D-Pad and the face buttons, instead, but – frankly – you’d be mad to. While the D pad isn’t quite as responsive or as flexible for speedy moves as the analogue stick was in the 360 original, the touchscreen is arguably more accurate. For the first few games you might struggle with the DS setup, but the more you get into it, the more intuitive the new approach becomes, as you effortlessly dodge through packs of incoming shapes while simultaneously sweeping the bullet stream around to wipe them out. 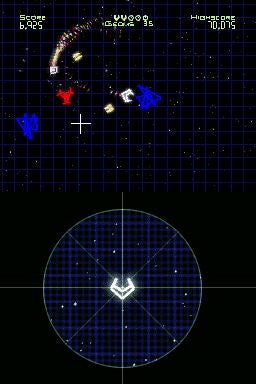 The basic Retro Evolved mode works much as it did in the 360 version; wave after wave of enemies appear, and your only concern is who to blast and where to dodge. Ratcheting up a bigger, better high score is, of course, the name of the game, and once again there’s an online leaderboard for those with Wi-Fi, albeit one without quite the cachet of the one on Xbox Live. For most of us, this is going to be the real meat of the game, as we push further and further through increasingly manic waves of enemies, desperately searching for a new tactic or just an extra blast of energy that can see us through a few more seconds of action. It’s the sort of thing obsessions are made of, and you can waste hours trying to achieve a new high score, partly because the more you play and the better you get, the longer you have to play to get up to the same level.


This could, you might think, damage GW:G’s potential as a take-anywhere, handheld game. After all, a game that relies on highly-focused, twitch-heavy action over five, ten and fifteen minute periods (or even longer) isn’t exactly the ideal contender for the bus. Luckily, Kuju seems to have realised this as well, because the headline Galaxies mode shoehorns the basic GW gameplay into a less time-intensive mission structure. You have a selection of Galaxies, each consisting of a handful of planets, each planet representing a level of action.


You’re accompanied by a drone, which improves with experience, and your new job (apart from blasting and surviving) is to collect the local currency, or Geoms. By earning Geoms you can give your drone new roles (e.g. harvesting geoms or defending the ship) and, more importantly, pay to unlock new galaxies and new planets. The trick is that, while you collect Geoms for everything you blast, you only get the megabucks by achieving particular score-based medals. This encourages you to play each level until you hit the mark.

The really clever thing about Galaxies mode is that each level is its own unique riff on the regular GW gameplay. Some experiment with particular waves or combinations of enemy. Others throw in moving obstacles, add annoying jagged borders to the playfield or even chuck minefields into the mix. You’re always doing something new and challenging, and as the difficulty ramps up faster than it does in straight GW – as does the score – you’re rarely playing for more than a few minutes at a time. Accomplished GW masters might find a few cakewalks along the way, but if you’re a novice or – like me – a complete no-hoper, you’ll also like the way in which Galaxies mode helps you develop confidence and skill. 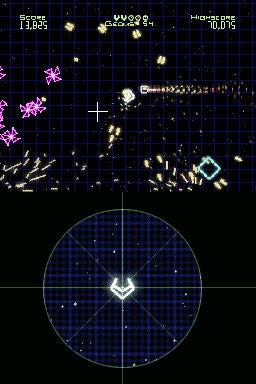 On top of this, GW:G even bundles in some decent multiplayer offerings. Sadly, you can’t play online, but download play is supported with another DS. Co-operative and competitive play modes are a no-brainer, but the versus mode is entertaining, with one player playing as normal while the other deploys enemies as resources allow on-screen.


Now things get tricky. GW: G is a marvellous handheld shooter – and one that sits in a different league to any of the retro arcade efforts that have turned up on the DS thus far. However, you are paying £16.99 for an enhanced version of a game you can buy for around a fiver on the PC or 360. Is it worth it? To my mind, yes. Other DS games have more depth or stronger visuals, but I can only think of a handful of puzzle games that have proved as captivating over such long periods as this one. Like them, GW: G isn’t a game that will command your attention for days on end, but it is a game that will keep you coming back for more throughout the year. 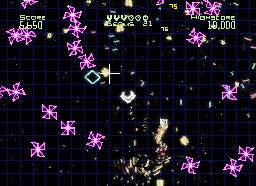 On the plus side, this means you’ll get your money’s worth, and lots of fun. On the downside, I might not have full use of my thumbs and fingers this time next year. Oh well, if that’s the way it has to be, I’d better just get stuck back in.


The world’s favourite arcade retro shooter works its magic on the DS, with great controls and a fine attempt to replicate the graphics. Crazily addictive and decent value to boot.