I’ve always though that Genius was something of a boastful name for a company, especially one that hasn’t produced anything that’s changed the world. What Genius does do is offer a surprisingly large range of PC peripherals, ranging from mice and keyboards to webcam and game pads and quite a few things in between. I’ve always associated it with low cost, budget items and have never actually reviewed any of its products. Indeed TrustedReviews has previously only looked at only one, a set of headphones (actually ”two” – it was the group winner in my keyboard and mouse combo group test in 2004…! Gordon). But its Traveler 915 Laser mouse seemed quite cute so I thought I’d take a closer look. 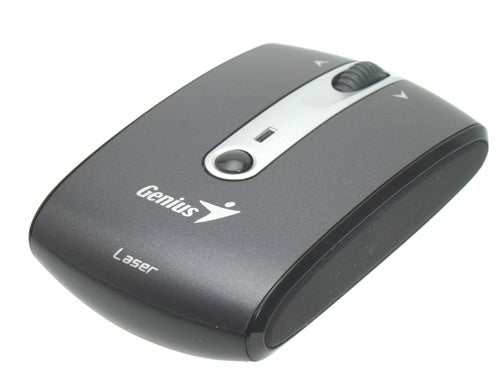 American spelling aside, as the name suggests, the mouse is aimed at the traveller, who wants a small, lightweight mouse to put in his or her bag. As such, the mouse is quite small and light at 5.6cm x 9.4cm x 24cm and only 95g. Appearance wise, it looks as if someone has pre-flattened that mouse ready for packing. It has a three colour finish, a basic grey a silver strip running down the middle and black down the sides. The Genius logo adorns the top edge and Dr. Evil’s favourite word, ‘Laser’ sits below this.


A round nodule at the base of the silver strip is actually a button, that when pressed ejects a small tray out of the bottom of the mouse. At first I wondered what this was – a small place to keep your mints, or small coins, before I realised that it’s actually for storing the USB dongle. This is a neat idea. There’s a sleek Logitech mouse knocking round the office that can’t be used as the dongle has gone AWOL.


Above this is a light that illuminates when power is running low from the two AAA batteries that power the mouse powered. These are placed in a straightforward fashion in a flap on the underside. 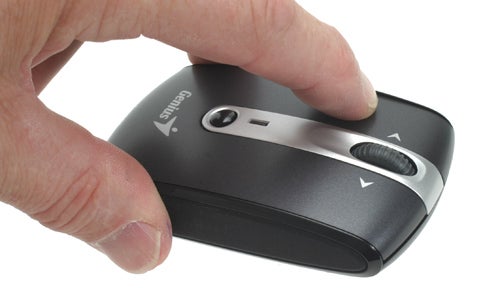 When you’ve finished using the mouse you can just turn it off, with a simple slider switch on the underneath. I was impressed that after turning it off then on again, it was ready for use straight away, with no lag at all. Genius are claiming six months battery life, which unsurprisingly I can’t verify. What it doesn’t have is anything as clever as Logitech’s V400 Travel Mouse, which turns itself off when you push the dongle back inside the mouse.


At the other end of the silver strip is the scroll wheel (or Magic-Roller as it’s rather amusingly named in the manual), which is covered in rather cheap looking ridges, but actually has a very good, responsive feel under the finger.

On either side of the wheel are arrows. These indicate that the wheel can scroll sideways as well as up and down, which is quite impressive for a mouse at this price. This function only works once you’ve installed the drivers, which are supplied on CD. Other than this there is little benefit to the software as the application is odd looking and difficult to use. I keep to the Windows Mouse Properties box in Control Panel. If you do want the sideways scrolling on your notebook it’s worth installing the driver before you travel as for some reason it’s a 50MB download, and takes ages too come down. 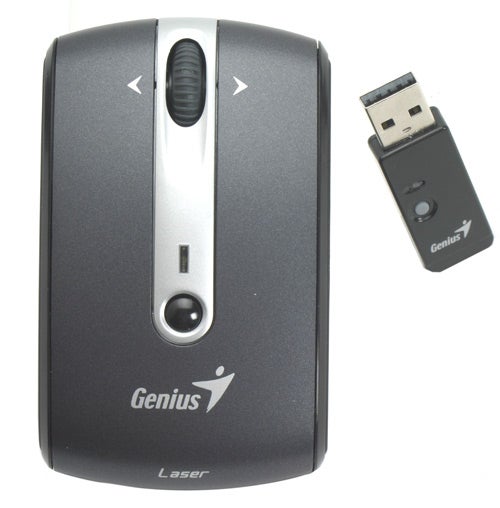 On the underside of the mouse and on the dongle are small connect buttons but I had no need to use these. As soon as I plugged the dongle in, the mouse worked straight away, out of the box, without installing any drivers. This was under Windows XP and Vista. The dongle and the mouse communicate over 2.4GHz RF and can be up to 10 metres away from each other, which gives plenty of flexibility. The mouse is quite easy to move around thanks to the rubber on the sides, which make it easy to grip. The mouse is also responsive due to the use of a laser, rather than an LED, and it worked well on a wooden desk, on a plastic tablecloth and on mouse mats. The only surface it definitely won’t work on is glass or a mirror as the laser will just be reflected back and won’t have a point of reference.


What’s even more impressive is that the use of a laser means that the resolution goes as high at 1,600 dpi, which means fast and accurate responses. This means it worked very well with a very high resolution desktop. If you find the mouse too twitchy you can switch it into 800dpi mode by holding down on both left and right mouse buttons for three seconds. 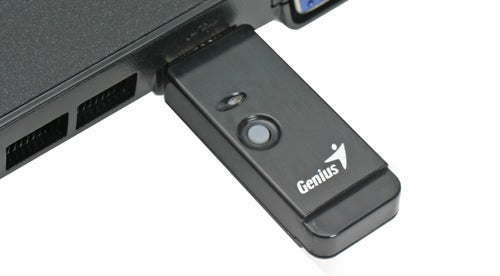 Overall then, the Genius Traveler 915 Laser Mouse impressed me. I honestly wasn’t expecting it to work as well as it did but it feels reasonably well made, and proved to be more accurate and responsive than many full sized mice I’ve used. Ergonomically, it’s inevitably a compromise due to the size but the price, at only £23 is very reasonable. The only negative aspects then are the lack of a tier one brand name and the fact that its looks are such that only its designers could love them, and even then probably not.


If you really need to pose, the Logitech V400 is probably worth spending the extra £7 on – you’ll certainly get a slicker looking device and software too. But if you’re more concerned with price, then rest assured that the Traveler 915 Laser is a perfectly respectable, if frill free, product and will do the job when you’re on the road.


It’s hit all the branches of the ugly tree on the way down, but otherwise this is an inexpensive portable mouse that is satisfactorily built. It is also well featured, feels fine in the hand and performs well. It’s style free but for £23 it’s a decent buy.