There are many things to love about home cinema, but one of the most annoying aspects is the mountain of remotes needed to control all your kit, with even the most modest system requiring at least three zappers. It’s an age-old problem faced by AV enthusiasts the world over, but the best solution is to replace the lot with a single universal remote – like this one from Taiwanese company Genius.


The Remote 815 can control up to eight different home cinema components and features a large backlit LCD touchscreen, the configuration of which changes depending on which device is selected. Typically it can be used to control a TV, video recorder, digital TV receiver, DVD/Blu-ray player, AV receiver, and hi-fi, but you can programme it to control any device that uses an IR frequency between 20kHz and 445kHz.


Picking up the remote for the first time, its luxurious build quality is immediately apparent. It feels reassuringly robust and heavy, even without the four AAA batteries needed it power it, and despite being fairly large by normal remote standards it still fits comfortably into the palm of your hand.

Looks-wise, its textured aluminium finish is appealing, while the touchscreen itself has seven different backlight colours, which is a neat touch that allows you to tell instantly which device you’re using while fumbling around in the dark. The LCD display is on the basic side, using static symbols and text as opposed to the animated, full colour dot matrix affair found on certain Philips and Logitech zappers, but considering the price we can just about live with that.


Just below the touchscreen are a few ‘hard’ keys that control what’s displayed on the LCD screen. These firm, clicky keys further reinforce the Remote 815’s high-quality construction and you can use them to toggle through the different devices, change the page and turn on the backlight.


Further down are more buttons covering the most commonly used functions like channel changing, volume, menu, exit and menu navigation, all of which also give a satisfying click when pressed. Unlike many universal remotes that look complex and daunting, this one has a straightforward, approachable look and feel, which is a real benefit.


It features an auto power saving mode with motion detection, which means the unit bursts into life as soon as you pick it up, but it’s a shame the backlight doesn’t turn on as well. Inside the remote is 512KB of flash memory, which stores the pre-programmed codes needed to control your kit, while the macro modes allow you to carry out several commands by pressing one button, and time delays can be added between commands if needed.

Some remotes from the likes of Logitech feature a USB port, which lets you connect to a PC, download the relevant codes and set up the remote online, but the Remote 815 lacks this connection, which means you have to manually configure it for each of your devices.


There are two ways of setting the pre-programmed codes. The first is to use the Auto Search mode, which sends out all of the available codes one by one. The downside of this is that you have to sit there like a lemon pointing it at the IR receiver while it runs though the codes, then quickly stop it when the intended device turns off.


Alternatively, you can input the code from the supplied list using the number keys on the LCD screen. If there’s more than one code listed for your brand, then you have to go through them all until you find the one that works. 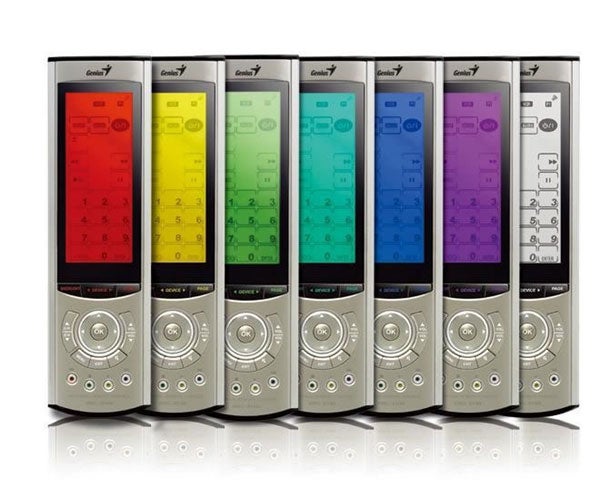 If you can’t find the right code then the remote also sports a learning feature, which lets you program commands by pointing your existing remotes at the eye on top of the Remote 815 and pressing the relevant buttons. For the soft keys on the LCD screen, the unit’s auto guide system automatically moves onto the next button when it detects each command, but for the hard keys you have to manually select which one to program.


If you’re thinking that all this manual button-punching sounds a bit long-winded and time consuming, you’re right, but the benefit is that you don’t have to worry about the manufacturer’s database getting codes wrong or omitting certain functions or products. The learning feature lets you tell individual keys to do exactly what you want, and because each button contains three of four different icons, they can be tailored to the requirements of your device.


One example where this hands-on approach comes in handy is setting up for a Sky HD box. With ‘Sat’ selected on the LCD screen, the default settings make no provision for the hard-disk playback controls (search, pause, play etc) so with a little tweaking we were able to add the relevant icons to the bank of controls and input the correct commands accordingly.

Setting macros is also easy, but you’ll need the manual when you do it for the first time. When programming a normal macro – which can only be done once all of the codes have been entered – you can store a sequence of up to 60 commands. But the Smart Macro function works a little differently – it learns the commands from your existing remotes, which means you don’t need to have entered all of the codes for it to work, but Smart Macros are limited to 16 commands.


We successfully setup a selection of macros with a range of components including a Sky HD box, an Onkyo AV receiver, Samsung Blu-ray player and Toshiba LCD TV. The process was blissfully simple and worked a treat – devices turned on as requested and correct inputs were selected.


Day to day operation of devices is generally pleasing, although there are a couple of annoyances – the play, stop and chapter skip hard keys (which are also colour-coded for digital TV use) are too low down and therefore quite awkward to press. Another minor niggle is that there’s no dedicated ‘play’ icon for the soft keys in DVD mode – you have to press the pause button or use the hard play key at the bottom. 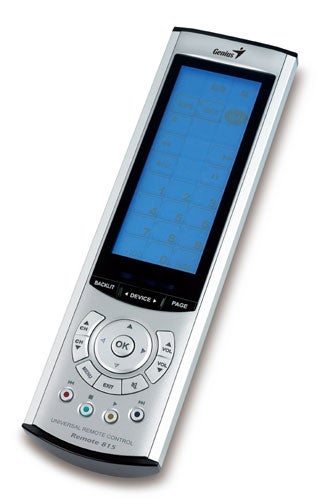 And although the Remote 815 is fairly well laid out and will make a great replacement for any dodgy remotes in your collection, you might be loathe to use it in place of a top-notch handset like the Sky+ zapper, or any other remotes that you’ve grown to love over the years. Using it to control Sky+ is a bit like driving abroad for the first time – initially disorientating, and even though you eventually get used to the differences it never feels quite right. You simply have to weigh up whether reducing the amount of remotes in your collection is worth the sacrifice.


Overall we’re impressed by the Remote 815. Its satisfying build quality belies its affordable price tag and there’s enough flexibility to overcome most obstacles. The LCD screen looks primitive next to the Philips Prestigo handsets, and it lacks the web-based sophistication of Logitech’s Harmony range, but we actually quite like the accuracy of the hands-on setup procedure.


Of course we can’t guarantee that you’ll have the same hassle-free experience with your own equipment – some people may find it a chore to setup, others may take umbrage with the awkward placement of certain buttons. But despite this, we think the Remote 815 is a simple yet effective solution for remote overload.