Genius is not a name you would normally associate with camcorders. In fact, you’re much more likely to think of mice, keyboards, and speakers. But alongside these products, the company also offers a small range of cameras and camcorders. Heading up the camcorder range is the G-Shot HD55, offering High Definition shooting and 5-megapixel stills – all for under £100.


At this price, you wouldn’t expect the HD55 to be as well constructed as Sony’s offerings. Sure enough, overall build quality doesn’t feel as sturdy as the big camcorder names, with the LCD panel a bit stiff to open, and the finish rather plasticky. There is no lens cap, either, and we had managed to get a fingerprint on the lens within minutes of getting the HD55 out of its box. But the chassis is solid enough, and fits snugly in the palm with all the main controls right at your fingertips. 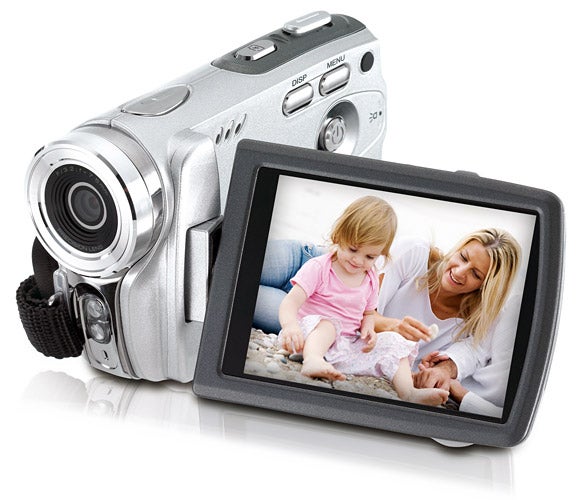 
Footage is recorded to flash memory, but only 32MB is built in – scarcely enough for a few seconds. Instead, you will need to add an SD or SDHC card, which are fortunately now very cheap. The 4GB PNY memory card we were using was enough for 130 minutes of footage in HD mode, 260 minutes in D1, and 745 minutes in CIF. In photo mode, 4GB will fit over 1,500 images even at the top setting.

The HD55 isn’t exactly jam packed with manual features, but it does have a little more on offer than the recent YouTube-oriented offerings from Flip and Creative. A rocker on the rear adjusts exposure from -2 to +2 EV in half increments. A single push of this rocker also turns the LED video light off and on. A switch on the side alters settings between portrait/landscape focus and macro modes, both of which are fixed. However, all the remaining manual configuration options require a trip to the menu, which again calls upon the rocker. 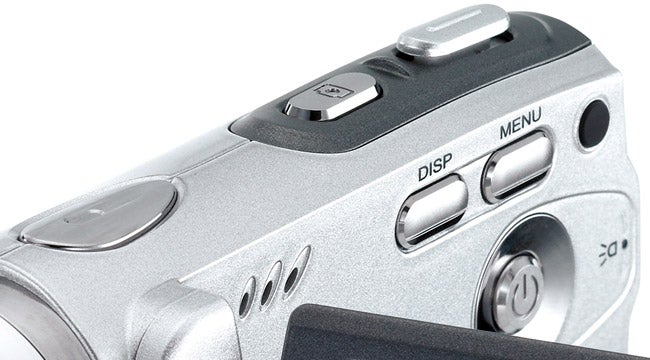 You can choose between four different White Balance presets – sunny, cloudy, neon and tungsten, or opt for fully automatic. But no manual mode is available. There are also two digital effects on offer. You can shoot in black and white or sepia, although as always we recommend you leave such treatment to the editing stage. A Night Mode can also be selected, which appears to allow slower shutter settings to let more light in, at the expense of a reduced frame rate. 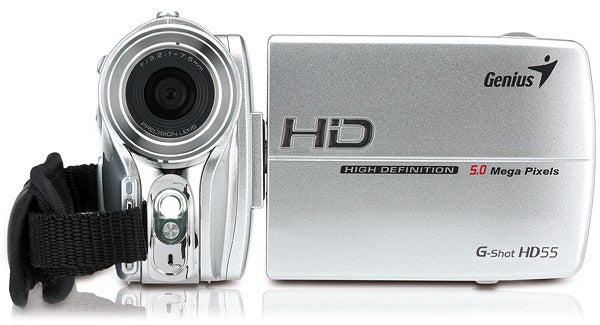 If you switch the dial on the back into Set mode, you can also change between PAL and NTSC video modes, but this only refers to the video output standard, as all videos are shot at 30fps. You can also select a 50Hz or 60Hz frequency. This refers to the base shutter multiple used, to avoid AC power flicker from lighting. Not surprisingly, though, there is no input for an external microphone nor an accessory shoe to mount it on.


Whilst the HD55 comes with a 1,100mAh Lithium Ion battery pack, it can also run on four AAA batteries. So if you’re out and about when the supplied power source gives out, you should be able to pick up alternatives so long as there are shops nearby. The power supply also charges externally, so you can leave the Lithium Ion pack regenerating whilst you use the camcorder on disposables.

No camcorder costing under £100 is going to give mainstream models much to worry about when it comes to image quality, but the HD55 does a respectable job. With just a fixed lens, it doesn’t produce pin-sharp images. The compression is also extremely aggressive, using only just over 4Mbits/sec even in HD mode – where Flip’s Ultra and Mino use a higher rate for video one third the resolution. This is visible in a general softness and lack of detail. The macro mode proved relatively effective at pulling close objects into better focus, but it was virtually impossible to get objects closer than 2m sharp in either mode. 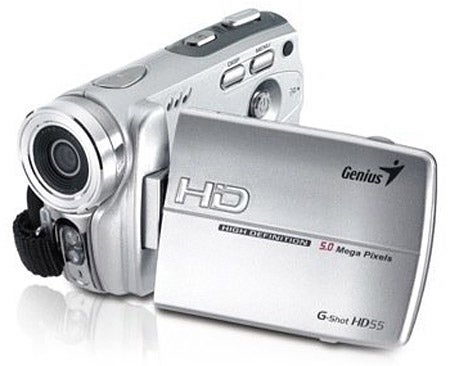 With enough light, colour fidelity is perfectly acceptable, whether the illumination is natural or artificial. In fact, even in worse conditions the HD55 did surprisingly well. However, here you have to choose between brighter, but jerky images in Night Mode, or darker smoother footage with this off. The LED light will make shooting possible in near darkness, but only for objects a few metres away – and the results are very grainy indeed. The zoom is also extremely jerky and we wouldn’t recommend using it except to set up a shot. If you use it whilst recording, you’re likely to induce seasickness amongst your viewers. It’s also digital, so reduces resolution.


A minijack on the rear provides component analogue connectivity, and there is a proprietary plug which doubles for USB and composite analogue video plus RCA audio. Whichever quality mode you use, the Genius records H.264 MPEG-4 video and AAC audio to a MOV file. This will therefore be Mac compatible, but not every PC editing app supports this format. Genius supplies Presto! VideoWorks 6 in the box, which has a basic set of editing features.


Priced under £100, the G-Shot HD55 goes up against the likes of Flip’s range and Creative’s Vado. If you’re shooting video destined for YouTube, these devices are a better option. They may not offer HD resolution, but they perform better in low light and make the upload process a doddle. Conversely, the cheapest standard definition big-name models have a lot more features, if not the raw pixel count. That said, the Genius G-Shot HD55 is about the cheapest HD-capable camcorder currently on the market, and its video quality is far from appalling. If you really are on a very limited budget, it would make a reasonable way to try your hand with video.