When a camcorder costs under £100, you don’t expect it to make claims about having ‘Perfect HD’. But that is what Genius has emblazoned on the G-Shot HD520. In fact, it only offers 720p shooting at 30 frames per second, not Full HD. That’s still fairly impressive, though, considering that HD pocket Internet camcorders offering 720p, such as the Flip Video UltraHD, still cost twice as much as the HD520. So how has Genius achieved this budgetary feat?


The G-Shot feels reasonably sturdy in the hand, but the main quartet of buttons are a little wobbly. There is also only 32MB of memory built in; just enough to let you test the camera is working. So you will need to invest in some SD memory before doing any serious shooting. An 8GB card will be enough for 2.75 hours in HD shooting mode. This runs at under 1MByte/sec, which is rather low even for the H.264 compression the HD520 uses.


The lens is also fixed, with just a 5x digital zoom to call upon, and image stabilisation is electronic, as you would expect at this price. The HD520 boasts still images up to 11-megapixels, but the CMOS sensor itself is only natively 5-megapixels, so this will use a hefty dose of interpolation. Aside from 720p, the Genius can record VGA video at 640 x 480 and web-oriented footage at 320 x 240.


But these are only the main headline functions. Open up the Mode menu and a few more will be revealed. The HD520 can also act as a voice recorder, capturing audio in MP3 format, and conversely function as an MP3 player. It has a ‘Personal Media Player’ (PMP) mode, too. Using the supplied Arcsoft Media Impression software, you can convert and copy over still images or video for playback from the device. 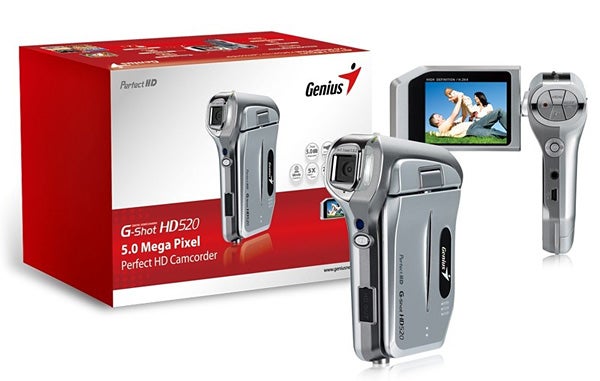 This would be a painful experience using the 2.5in LCD screen, but presumably this is more for when the HD520 is connected to a TV, although the AV socket does double as a headphone minijack. The same can’t be said of the e-book reader function. There’s no guidance as to which formats are supported in the manual, and the prospect of reading a book on a tiny camcorder screen is basically ludicrous anyway.


Probably the most useful extra feature for a budding videomaker, however, is the motion detection mode. In this setting, whenever the camcorder picks up movement in the frame, it will begin recording. If the scene is motionless for five seconds, it will supposedly stop again. But we found we had to push the camera button on the front to end recording manually. Clearly, motion detection mode will be most effective with the power supply attached, as the battery only lasts an hour or so.

The Genius’s controls are slightly strange compared to most camcorders. The large button on the rear with a red LED in the centre only takes photos, and you have to push it annoying hard to get it to do even that. Video recording is inaugurated by an innocuous button on the front. With the pistol-grip format of the HD520, shooting video feels even more like firing a gun, and relatively intuitive once you get used to it.


The same can’t be said for the zoom control. Its positioning on the side of the HD520 means you will have to move your index finger from the video record button every time you want to use it. Alternatively, you can use your middle finger to operate record, but that’s hardly comfy. In all, Genius clearly needs to apply some further thought about control positioning. 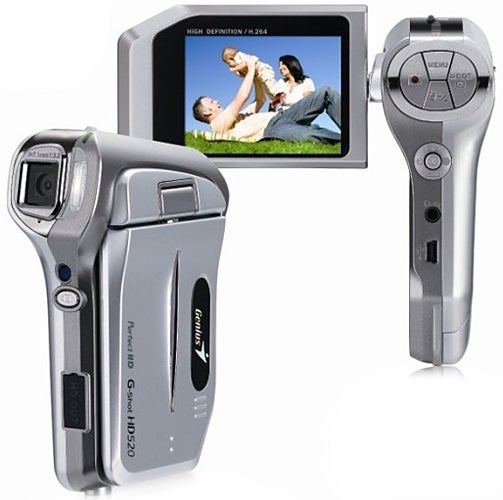 Genius has incorporated a few manual controls into the joystick on the rear of the HD520. Pressing this upwards enables ‘Z-Lighting’, which corrects for scenes with very high contrast in lighting. Essentially, it boosts detail in shadows, although it doesn’t appear to do much for blown-out highlights. Pressing the joystick right enables the HD520’s face detection system, a surprising feature in a sub-£100 camcorder. However, it’s a bit slow compared to the best implementations and doesn’t pick up faces well against bright backgrounds. There is also a macro switch on the top, which allows the shooting of objects down to a range of about 10cm.


The remaining functions are found within the menu system and they’re not particularly extensive. In Program mode, you can adjust exposure up or down by four increments. You can also choose between three daylight and two artificial illumination white balance presets, alongside automatic and manual modes. Genius also provides two scene modes, but they’re extremely strange choices. Although the Dawn and Auction options have their uses (for sunrises and shooting photos of items for eBay), without the usual Sports and Low Light scene modes they seem rather random.


That’s about it for video, although there are metering options for still photography, plus single and continuous shooting modes. Five digital effects are available, but as always we’d recommend leaving this until the editing stage.

You can forgive a few bizarre settings at this price, if the footage is generally good. In good lighting, the HD520 shoots a vibrant picture, although colours can be saturated unrealistically. There is also less artefacting than would be expected considering the level of compression. Unfortunately, the zoom is extremely jerky, and being digital there is a noticeable loss in quality when you zoom in.


Performance is reasonable in low light. We weren’t expecting miracles, but the HD520 did manage to do a decent job in adequate artificial illumination. It also maintained some colour as the lighting levels dropped, although it singularly failed our 100W ceiling bulb test, producing an image that was almost completely black. It’s in good company here, though, with the majority of budget camcorders having similar problems. 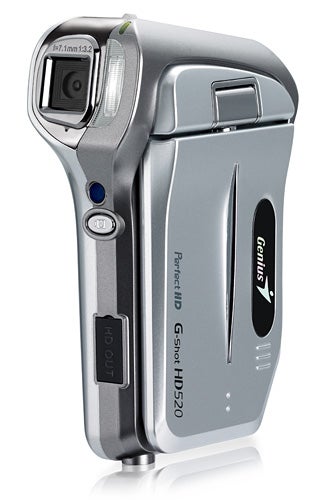 The Genius shoots footage in AVI format, and as with our previous experiences with H.264 packaged in this way it’s not the most compatible with editing software. Adobe apps will import this footage, but can’t edit it properly. Fortunately, the supplied ArcSoft Media Impression includes some limited editing features, plus built-in YouTube uploading.


Alternatively, you can hook the HD520 up directly to your TV. As implied earlier, the headphone jack doubles as an AV output, but only provides composite analogue video and RCA audio. For HD-quality output, there’s a mini HDMI plug on the front, and amazingly, Genius actually includes an adapter cable in the box so you can plug this into the full-sized HDMI on your HDTV.


It’s hard to be too critical of a camcorder shooting 720p HD for under £100. The Genius G-Shot HD520 captures good enough footage in adequate lighting to be worth considering as a cheap and cheerful shooter for family occasions. However, if you have any more serious intentions with your video, the confused control system and jerky digital zoom mean saving up for a more expensive alternative would be a better choice.