1980s Sweden may not seem like the ideal setting for a video game, especially one that has four players teaming up to wage guerrilla warfare against a robot menace, but after a quick hands-on with Generation Zero, I’m a convert.

There’s something reassuringly familiar about playing as 80’s teenagers in an open world as they fight to regain control of their homeland. Weirdly, this comfort isn’t borne from personal experience – I lived through just six months of the decade myself – but through the magic of celluloid.

The aesthetic of 80’s horror movies was achieved through a combination of film grain, atmospheric mist and a weirdly utilitarian feel that makes many of the antagonists seem almost industrial. This is all here in Generation Zero but transplanting the action to a Swedish island makes it all feel a little unnerving because of how alien it feels.

It’s in the architecture; you’ll stomp through pokey kitchens or bedrooms coated in faded wallpaper and kitsch decor, a far cry from vast American apartments. Fog rolls in through pines and the winding roads are filled with the blocky shapes of ageing Saab’s. The atmosphere here is heavy, from the second you start. You enter the game standing on the shore of a small island and it’s hard not to look at the fog rolling in over the water, or the imposing farmhouse squatting over the horizon in the darkness. 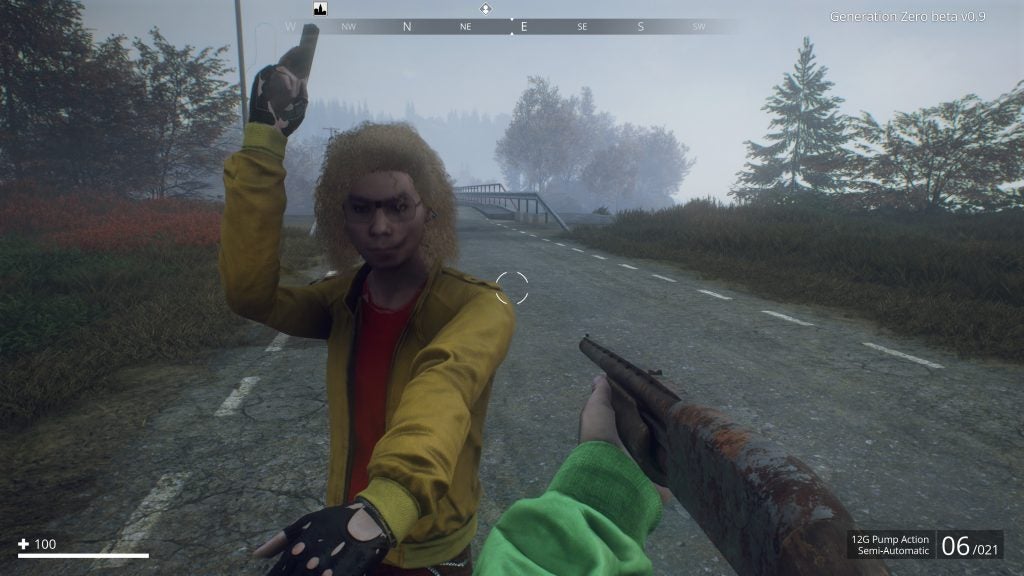 The strongest part of Generation Zero is its aesthetic; influenced both by these 80’s horror flicks and the art of Simon Stålenhag – the artist’s blend of 80s Sweden and robots is an obvious touchstone even if it’s not officially acknowledged as such. This is matched with a character creation screen that asks which archetype of 80’s teenager you wish to play as, which impacts their initial outfit. I started the game clad in a letterman jacket and Ray-Bans, while my co-op partner looked like he’d escaped from a Sex Pistols lookalike competition, strolling the Swedish wilderness with a mohican and a ridiculous amount of belts, buckles and spikes.

However, instead of feeling zany, there’s something lonely about the experience of ambling around, sprinting from cover to cover, coming to a tense stop and hurling yourself into a crouch when you get within range of an enemy. During the four or five hours I put into the game, I only encountered three different types of enemy but the most common by far was a robotic dog with sub-machine guns strapped to its back. These were low enough to be hidden by dips in the terrain or the occasional bush, meaning they would ambush us as often as you do them.

You can’t speak to the monsters here and when playing alone your only interactions with other sentient beings are the aggressive attacks of the robotic menace.

Outside of the tone and aesthetic, the rest of the concept doesn’t quite match up. Movement is clunky and something feels off about the way you traverse the game space. Shooting has all the right parts; guns feel solid and there’s a real heft to the two-handed weapons that makes you feel vulnerable as you carry a shotgun into close quarters. Impacts feel meaningful, even if the act of shooting robots means that a single bullet to the weak spot won’t take them down.

That said, shooting also feels inaccurate at the best of times and even when lining up shots with a long range rifle, it felt hard to land precise hits, something that will hopefully get better with judicious application of polish during development. Similarly, the skill system needs more work but promises an exciting future with several different specialisations for those that tunnel deep enough into it. 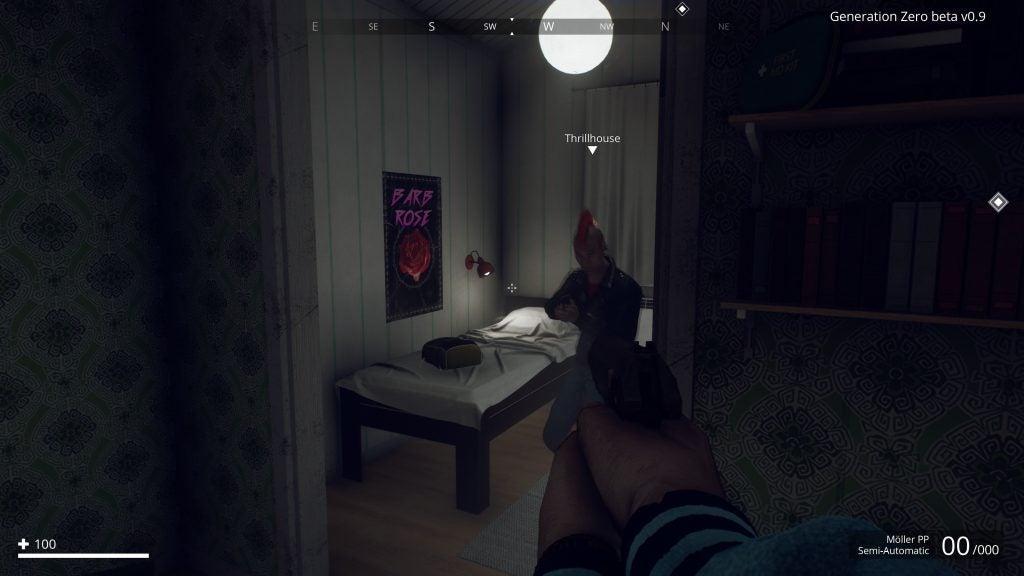 While loot in Generation Zero appears to be generated on a person-by-person basis – meaning no argumentative negotiations over sharing out gear (a delight) – the real problem is what you do when you actually get it. Much like games of old, you’ll spend time shuffling your inventory constantly, trying to decide whether to drop an enemy-distracting boombox or an enemy-exploding gas tank, just so you can try and fit a few more bullets into your bursting kit store.

At this early stage, it feels like developers Avalanche have a choice to make. There are, in reality, two separate games here. One which sees you (and if you fancy it, a few pals) waging war on the robots with household equipment and rusty weaponry; fighting back the menace with smarts and the judicious application of lead. The other is a game about going from house to house in a desolate wilderness, stockpiling items and spending agonising minutes trying to work out what you can afford to cut loose.

One half of this game, the shooty part, works, and I am eagerly waiting to see what comes next. I’m not wild about the other half, which apes survival game convention and frankly seems to exist just to slow things down. 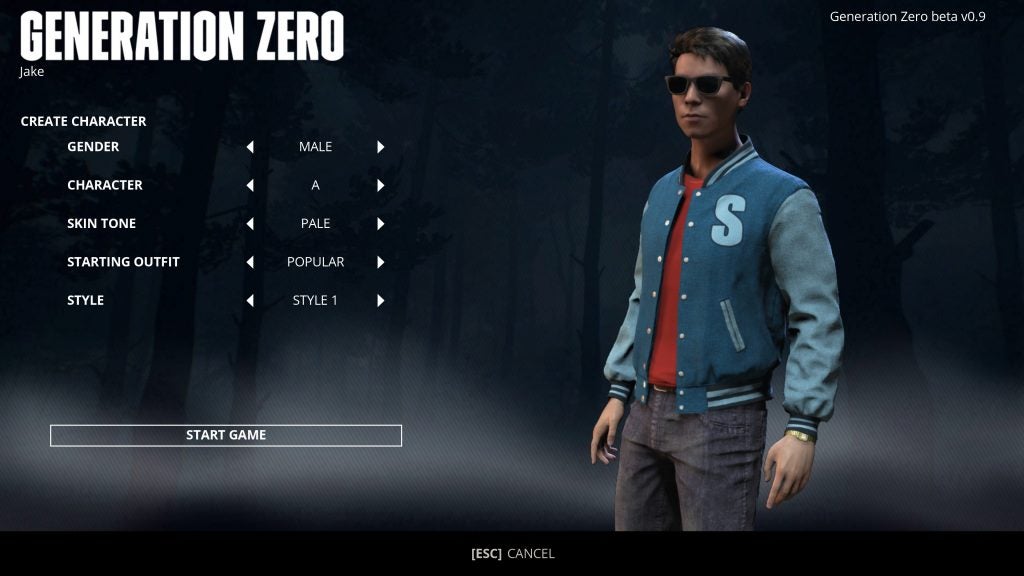 There’s a game here that works already: playing the role of kids and surviving a robot assault using household items and ingenuity is a lot of fun. Even when you go from fighting single robots to larger crowds that threaten to overwhelm you if you’re not constantly on the ball, it remains satisfying.

Paired with the game’s atmosphere, this could be a unique treat that draws audiences in, no doubt buoyed by public interest in recent hits like TV show Stranger Things and RPG title Tales From The Loop. But there’s also work to be done: mechanics need refining and movement and item glitches were commonplace.

What Avalanche should be doing is deciding if the half-baked survival elements are helping or hurting their game, and focus on capturing the ‘kids on an adventure’ feel for their shooter.

That or just give me a walking simulator on this beautiful island. I’m easy.