Gears Tactics is a great game that is sure to delight fans of the series. More hardcore gamers will find it a little lightweight to be considered an XCOM rival.

Gears Tactics is the latest entry into Microsoft’s iconic shooter series. But unlike its predecessors, Tactics is not a third-person tactical shooter. Instead, it’s a turn-based strategy game in the same vein as XCOM 2 or Phoenix Point.

If this sounds exciting, it should. If ever there was a franchise that screamed to be turned into a tactical, turn-based strategy game it’s Gears. Dystopian sci-fi setting with scary-looking monster enemies, check. Badass future marines with over the top weapons, check. All of the genre hallmarks are there and begging to be used, which is why on paper the side-ways move makes sense.

And for the most part, Tactics totally delivers on its promise of Gears-themed-XCOM. Make no mistake. This is a great game for fans of the franchise and an ideal entry point into an under-served genre of gaming for console gamers. But sadly, hardcore fans of the genre will find the experience a little too lightweight to fully scratch their tactical itch, while waiting for the fabled XCOM 3. Tactics is a prequel to the original Gears of War, that focuses on a Gabriel “Gabe” Diaz as he tries to put together and command a squad of soldiers for a rogue COG (government) operation. Not giving any spoilers away but the plot nails Gear’s beloved over-the-top tone and features a great cast of new and returning characters that any fan of the franchise will love. It also serves as a nice stepping stone that eases players into the game’s new tactical focus by introducing the mechanics one at a time.

Once through the fairly long tutorial, any XCOM gamer will automatically feel at home. Tactics features a top-down view that tasks you to take control of a squad of up to four Gears and guide them through various missions.

The squad control system is at first glance a carbon copy of XCOM. Each soldier has a set number of action points each turn that are used for movement, shooting, and activating skills. The game’s turn-based so once you’ve spent your actions the enemy AI controlled grubs do the same. All the genre tropes are here, including a focus on using cover to protect your soldiers and establishing overwatch zones – where your allies sets up a parameter and shoots any enemy that wanders into it during their turn.

Even the classes of COG are almost identical to the soldiers in XCOM. They are vaguely divided into heavy, support, sniper and assault, each of which can be specialised using skill points, which are earned post-mission when the unit earns enough experience to level up, again like XCOM. 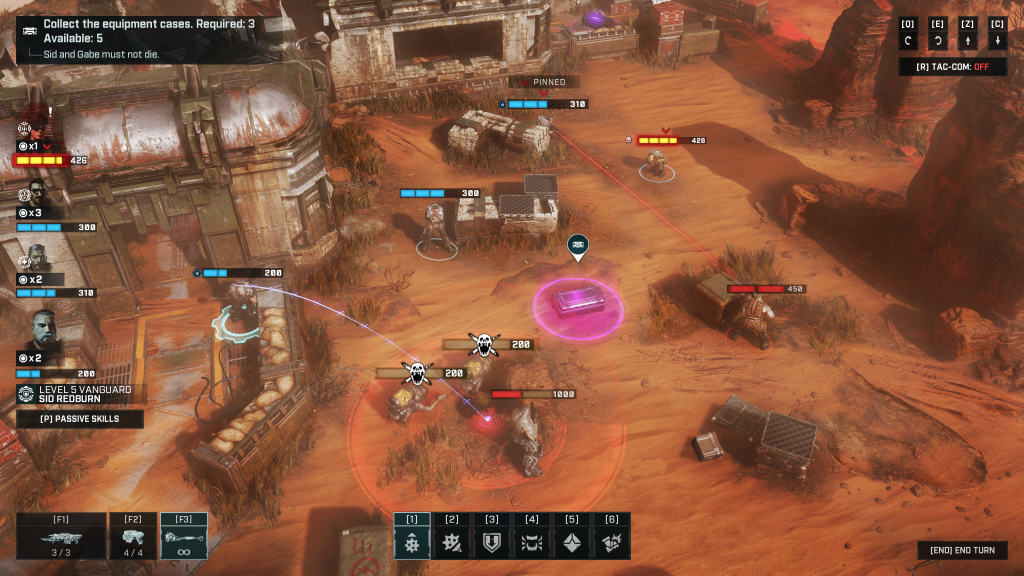 This  is no bad thing in the early stages, as some minor tweaks Microsoft has made to the format are excellent. For example, the chainsaw bayonet makes a return and can be used to perform executions. The animations are gloriously bloody and totally in-keeping with past Gears games. Enemies also line up with the existing monsters we’ve seen in previous titles. The attention to detail is great with each moving and acting exactly as you’d expect.

Gears’ heavy armour and weaponry gives the combat weight and makes each kill wonderfully satisfying. Early on, clever level design and intelligent use of grub “emergence holes” offers enough differentiation and requires tactical planning to entertain even the most diehard of gamers.

Emergence holes are sinkholes that appear and act as an entry point for enemy grubs. Like other Gears games, you can close them, and stop more enemies appearing, by throwing a grenade into them. The hole’s constant threat is a great mechanic that can completely change the flow of a battle and ruin even the best-laid plans in seconds if you’re not careful.

But after the first few missions, XCOM fans will begin to spot a few weird omissions and changes to the classic formula that aren’t necessarily for the better. The signs start the moment you finish the opening tutorial/first three missions and realise, there’s no base building in Gears Tactics. Unlike pretty much every other turn-based tactical shooter, you don’t get to customise your base or invest in new research projects to improve your weapons and armour. 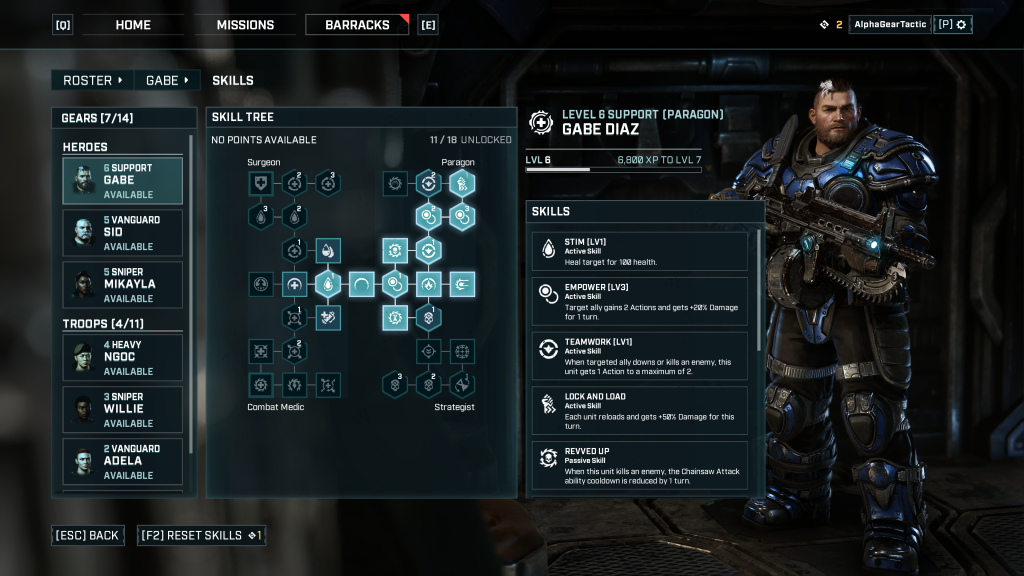 The only tweaks you can perform are to Gears themselves. Specifically, you can teach them new skills or tweak their armour and weapons using upgrades. These can be scavenged from crates mid-mission or are offered as rewards for completing objectives. Outside of that, the only changes you get to make are aesthetic.

The skill trees are a welcome differentiator that let you further specialise each type of soldier into one of four subclasses. Support, for example, can be specialised to be a combat medic, surgeon, strategist or paragon. The latter is particularly cool, featuring buff abilities to temporarily boost soldiers damage or grant them additional action points.

But the more you play, the more you realise this is one of many cuts the studio has made in a bid to make Tactics more accessible to Gears fans not familiar with the genre.

Unlike most games in the genre, Tactics has a very linear story. This is reflected in the mission structure, which is more akin to the chapter system seen in the series’ past titles as opposed to XCOM. There’s no world map, and the only deviation you get to take is which side missions you embark on between story chapters.

This may sound good, but side missions have absolutely zero impact or overarching effect on how the campaign will play out. The only motivating factor in picking one over the other is the completion reward they offer – weapon and armour upgrades are colour coded by rarity so taking harder quests with better rewards is generally a better option. 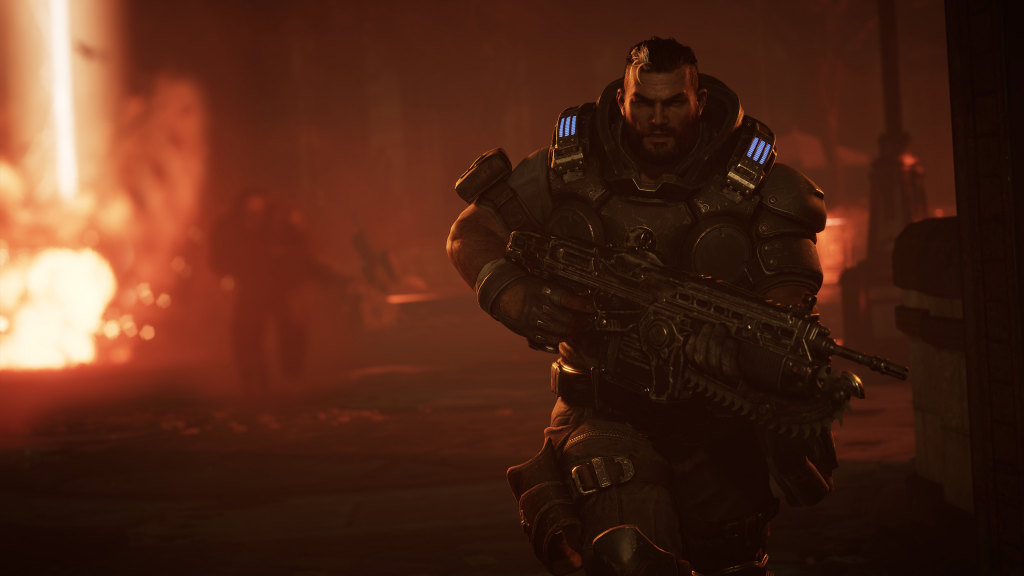 It’s the same story with some of the in-mission gameplay tweaks. Though the core mechanics are distinctly XCOM, the edges have all been softened in Tactics. At first, the tweaks feel minor and include things like the fact snipers can move and still fire their main weapon in the same turn, or that executions and chainsaw kills grant additional action points.

But these small omissions slowly add up to make the game feel a little too forgiving. I’m currently on my second campaign playthrough on the hard difficulty setting, and I’m still yet to find a situation I can’t improvise my way out of with minimal losses – something I can’t say about XCOM or Pheonix Point which are both brutal when you make even a minor mistake.

Thankfully, the missions are still fun and offer enough variety to keep you entertained for at least one playthrough if you get invested in the story. Missions include rescue, capture and hold, speed run, destruction, assassination and general survival objectives that constantly force you to rethink which soldiers you bring into the fray – adding a moniker of strategy to the otherwise linear experience.

Boss battles at the end of each chapter are another welcome change of pace that require you to adopt new strategies and offer a clear challenge on the first playthrough. These see you fight custom one-off enemies with special attack patterns and defences you won’t see in the rest of the game and, without giving away spoilers, are pretty darned epic in scale. The only downside is that once you know how to do them, easy, so once again there’s little replay value. 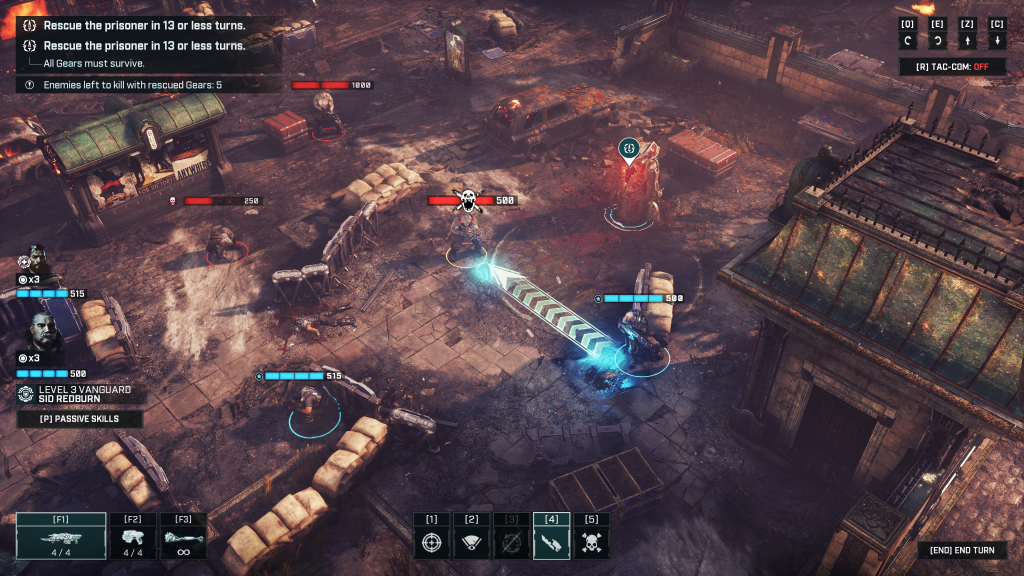 Should you buy Gears Tactics?

If you’re a Gears fan, then Tactics is a fantastic game. A satisfying, albeit linear, story campaign and accessible gameplay make it a great entry point into the world of turn-based, tactical shooters.

There’s also enough on offer to satisfy most existing fans of the genre for at least one playthrough – though the lack of deep base-building mechanics and linear progression path make it feel a little too lightweight to be a full-on XCOM replacement.