Gears of War: Judgment is set fifteen years before
the first GoW game and follows the story of the original partnership
between two of the series’ main characters: Augustus Cole and Damon
Baird.

The latest title has been developed by People Can Fly
studio; the same team behind manic arcade shooter Bulletstorm. Their
hand in Judgement is clear to see with competitiveness and high scores
taking precedent over a captivating storyline.

What Gears of
War: Judgment does bring though is a revitalisation to a franchise
that’s been stuck in a rut. The first game held so much promise, but the
series had pushed the third-person shooter as far as it could go within
the rigid confines the series offered. Judgement prefers to hover much
closer to the arcade gaming experience, and does so with great success. 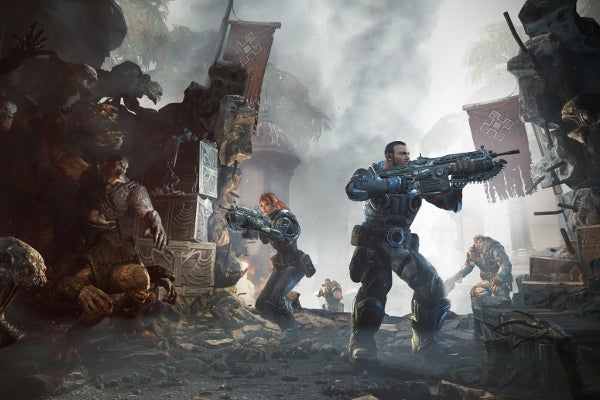 Following
the story of the series’ Alpha squad members, Cole and Baird, the game
begins with the four members of their pre-series team, Kilo squad, being
taken into their trial for war crimes. The game then plays out what
events led them to being in that situation, taking the story from the
perspectives of each character, including two new faces – Garron Paduk
and Sofia Hendrick.

All four are young, rebellious characters
trying to find their place in life in the middle of a war. Paduk, who
actually fought on the opposing side of the civil war, has now joined up
with his old enemies to fight the greater threat of the Locust.
Hendrick, on the other hand, is a youthful military cadet, trapped
between wanting to impress her superiors and her alternate rebellious
romanticism.

Baird and Cole are meant to be brash, patriotic,
younger versions of the well-loved characters from the main series.
Unfortunately, the characteristic sarcasm and witty banter that made
them those characters is missing. Instead, the comic relief portion of
the game falls flat and largely fails to provide a breather from the
often dark dialogue. 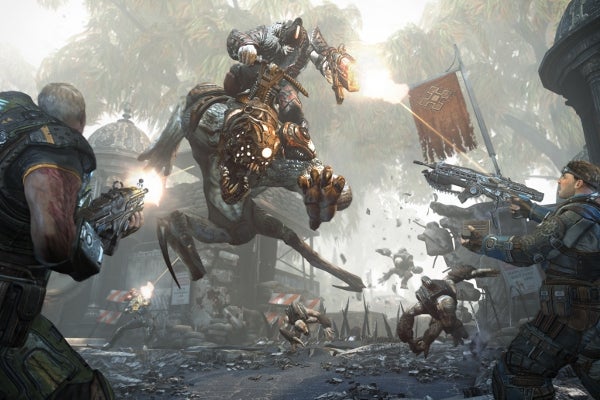 The
new team often finds it difficult to fuses together as a cohesive unit,
however this adds to the appeal and realism of the Judgment storyline.
The squad isn’t a bullet-hard military operation or a pack of
inexperienced youths. Rather they are impressionable and eager to earn
military distinction without losing their devotion to the cause – their
fellow men.

Each of the characters comments on their changing
surroundings, providing sporadic narratives for their experiences during
each mission and providing helpful back-story filler that helps brings
the player closer to understanding the reason why the squad faces trial.

Epic
Games and the People Can Fly team have worked hard to try and create
rounded characters, but in a campaign that only provides around 5-10
hours of gameplay, they aren’t quite as desirable as some might think. 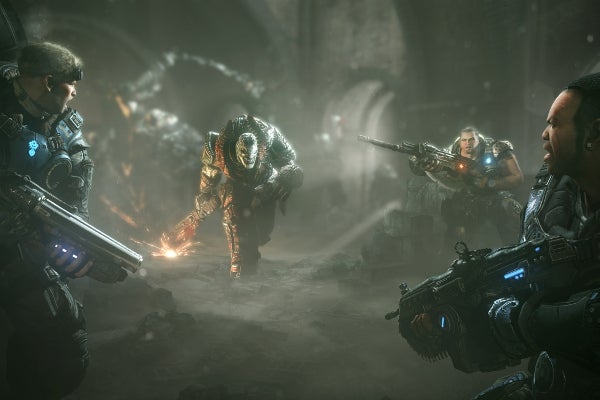 With
the People May Fly development team onboard, Gears of War: Judgment is
much more akin to an arcade experience than a tactical shooter.
Judgement offers two playable campaigns that are related in storyline,
yet distinct from each other in terms of gameplay style.

The main
campaign is the one of the title, following the four previously
discussed characters fifteen years prior to the first Gears of War game.
Instead of featuring a long unbroken narrative like the original
series, Judgment is broken down into small, playable chunks each rated
on a three-star scale, where the player earns more stars depending on
their performance. Higher scores can be achieved by completing more
kills, turning enemies into “gibs”, performing headshots and completing
achievements or ribbons during the mini-chapter.

Any “down but
not out” injuries will negatively affect your score. The AI, although
vastly improved in this title, still leaves you crawling about on the
ground waiting for someone to help you up, meaning access to precious
kills and creativity bonuses can be lost out on while you’re waiting. 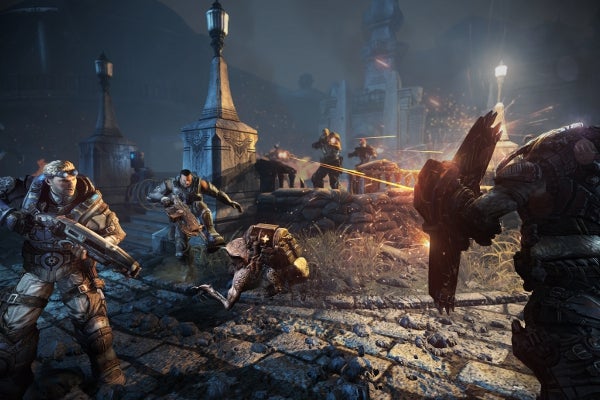 A
huge score boost can be earned if you opt in to what the game calls the
“Declassified” mission options. These are optional objectives that
serve to make the combat much more varied. As with other games in the
series, the constant combat can get a little repetitive. Accessible via a
glowing Gears logo on a building early on in each segment, Declassified
objectives employ certain mission restrictions such as reduced
visibility, increased enemy presence, limited ammo or reliance on a
single weapon.

Judgement offers some challenging combat once the
Declassified option is engaged, and the move also adds extra
replayability as you battle to achieve three stars on every level, however
the repetition of ‘start chapter, pick up Declassified objective,
survive, rinse, repeat’ does start to feel a little tedious after a while. Nevertheless it’s also a well-executed attempt to bring new gameplay options to a
tired series and introduces some enjoyable new weapons too.

Next
Gears of War: Judgment – Gameplay, Multiplayer and Verdict Review